A few months ago we covered an 1899 A-style mandolin that was made by Orville Gibson himself. Today’s Catch of the Day is a mandolin made in 1907, five years after Orville sold his company. As I mentioned in the previous post, Orville Gibson had a some brilliant ideas and a some odd ideas. This 1907 mandolin goes a long way to sorting out which was which. The most obvious good idea, and it was a real game changer, was the concept of carving the top and the back of the mandolin in the same way a violin was carved. (If you look at the side view you can see the distinct arch of the top and the back.) The most obvious weird idea was Orville’s notion of carving the back, sides and neck out of the a single piece of wood. Not only is that technique difficult to do, it wasted lots of wood and it turned out not to be a very stable way of making a mandolin. Add the fact that they didn’t sound great and you can see why the new Gibson company ditched it in favor of the more traditional method of making the back, sides and neck out of different pieces of wood.

This 1907 A-4 still has a few vestigial examples of Orville’s influence. It has a fancy inlaid pickguard, a very Orville touch, and the early “pineapple” tailpiece cover. It also has a fairly shallow neck angle, another Orville touch. A few years later Gibson would begin to cock the neck back a little more, which gave their mandolins a little more volume and bite. Still, these early A-style mandolins are very good sounding, with a delicate, singing quality that works well for classical music. This is not a mandolin for bluegrass. This example looks to be in extremely good condition. It’s currently listed on eBay and it’s in the UK. The auction ends on February 24 and the current bid is $1699.24. 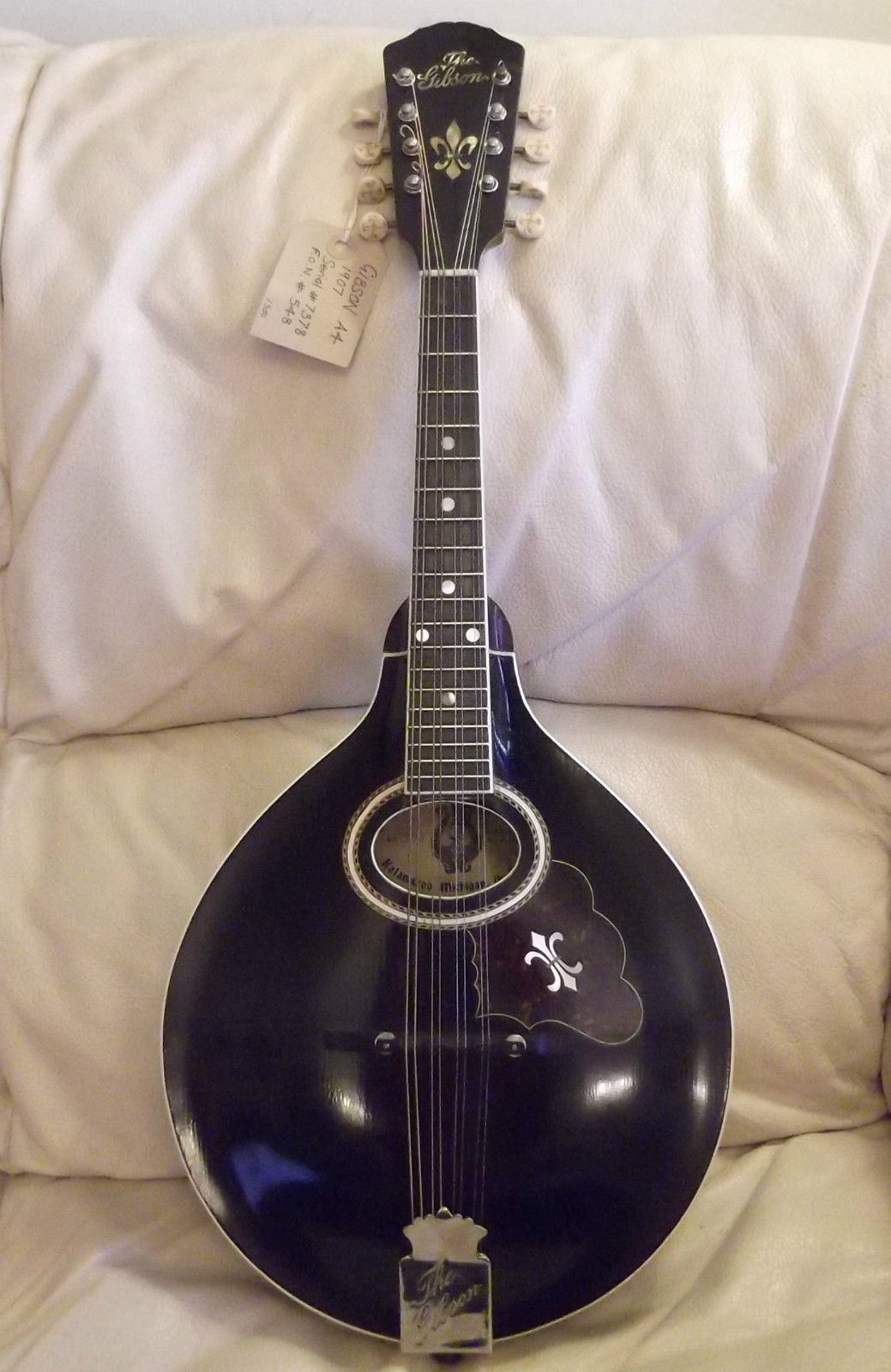 No, these tuning machines were not installed upside down. In Gibson’s early days they used tuning machines with the cog above the screw, which turned out to be a bad idea. When tuned up, the string tension tends to pull the post forward and slightly disengaging the cog from the worm screw. This made turning the buttons more difficult and sometimes caused the tuning to slip. 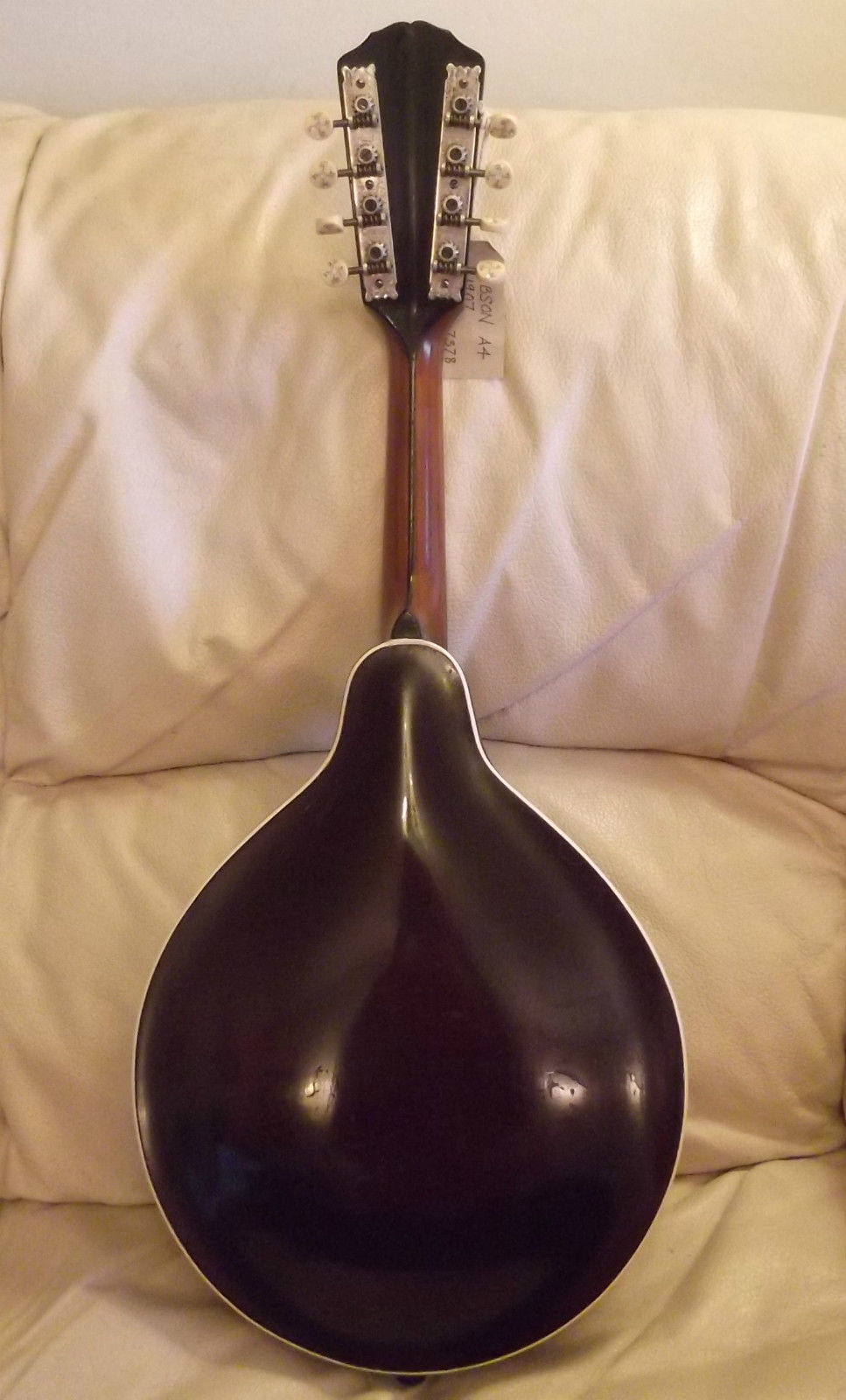 This gives you a good idea of what the top and back carving looks like. 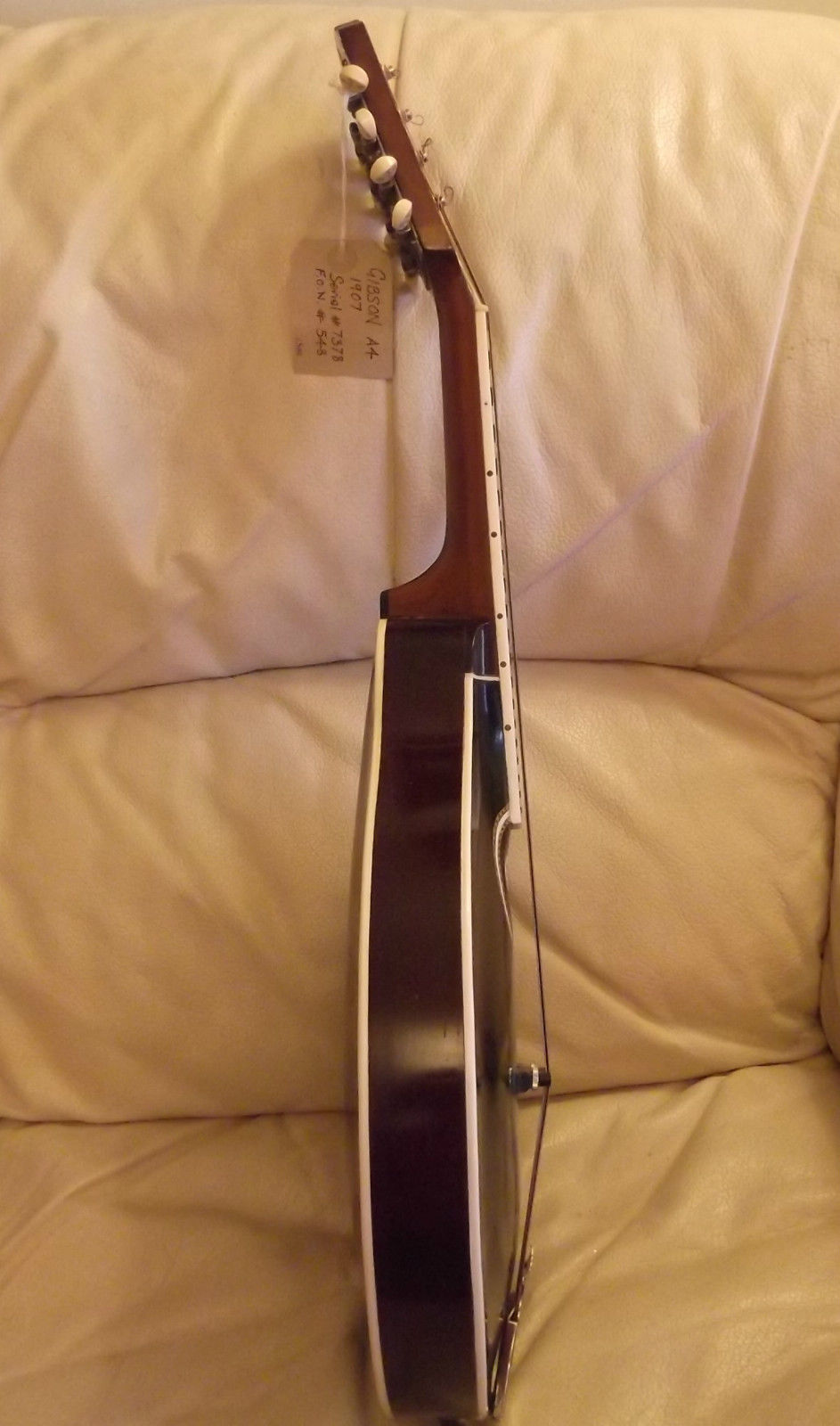 This mandolin is early enough to boast a label that shows Orville Gibson himself superimposed over one of his wildest creations, the Lyre Mandolin. 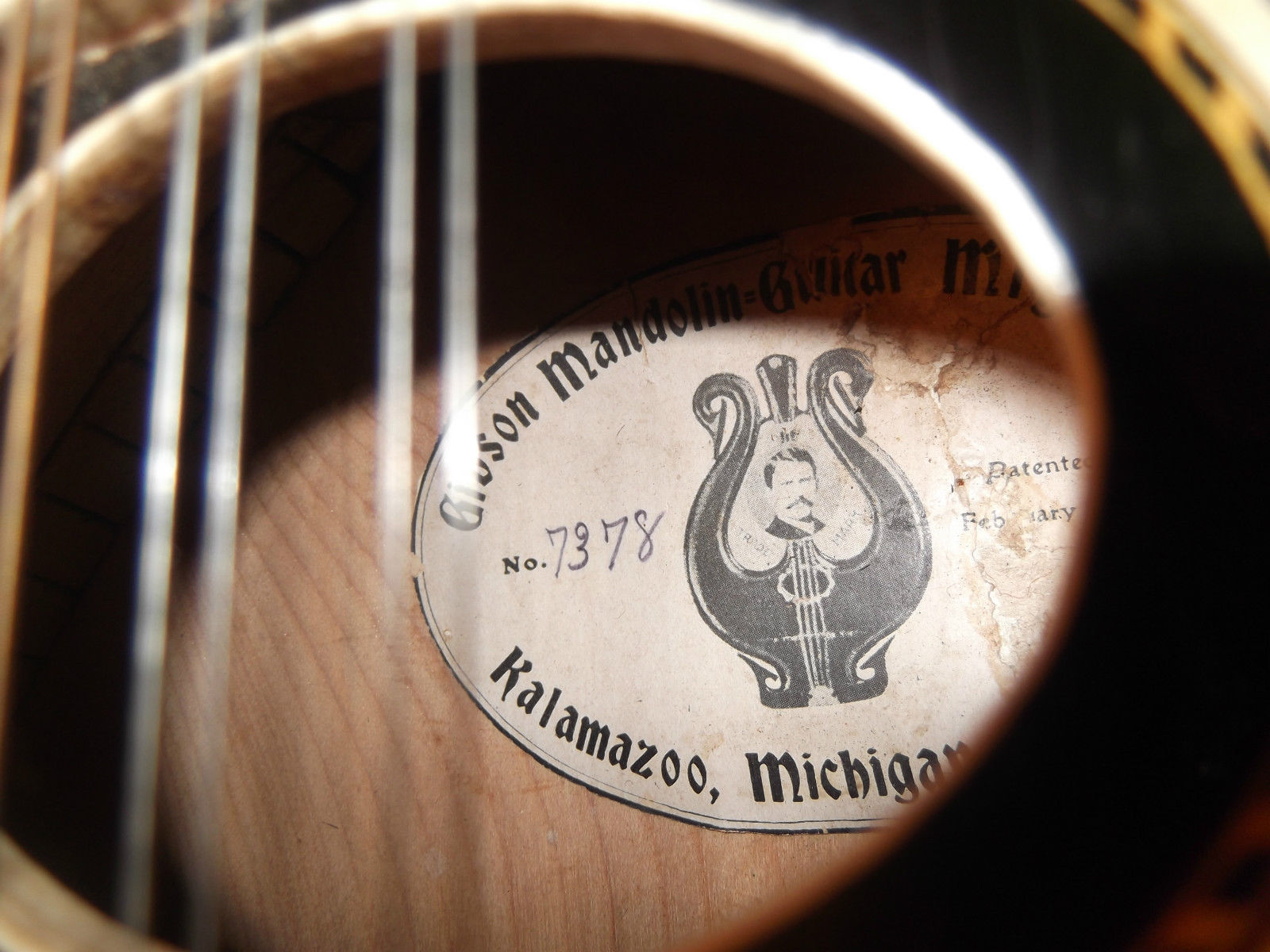 This was the last year Gibson used the inlaid pickguard. In 1908 they introduced the raised style. They called the raised version a finger rest because at the time some classical mandolinists would plant their fingers on the top of the instrument, which was easy on a flattop bowl-back mandolin but difficult on a carved top mandolin. The finger rest wasn’t designed to protect the top as much as it was an attempt to give classical players a place to park their fingers. 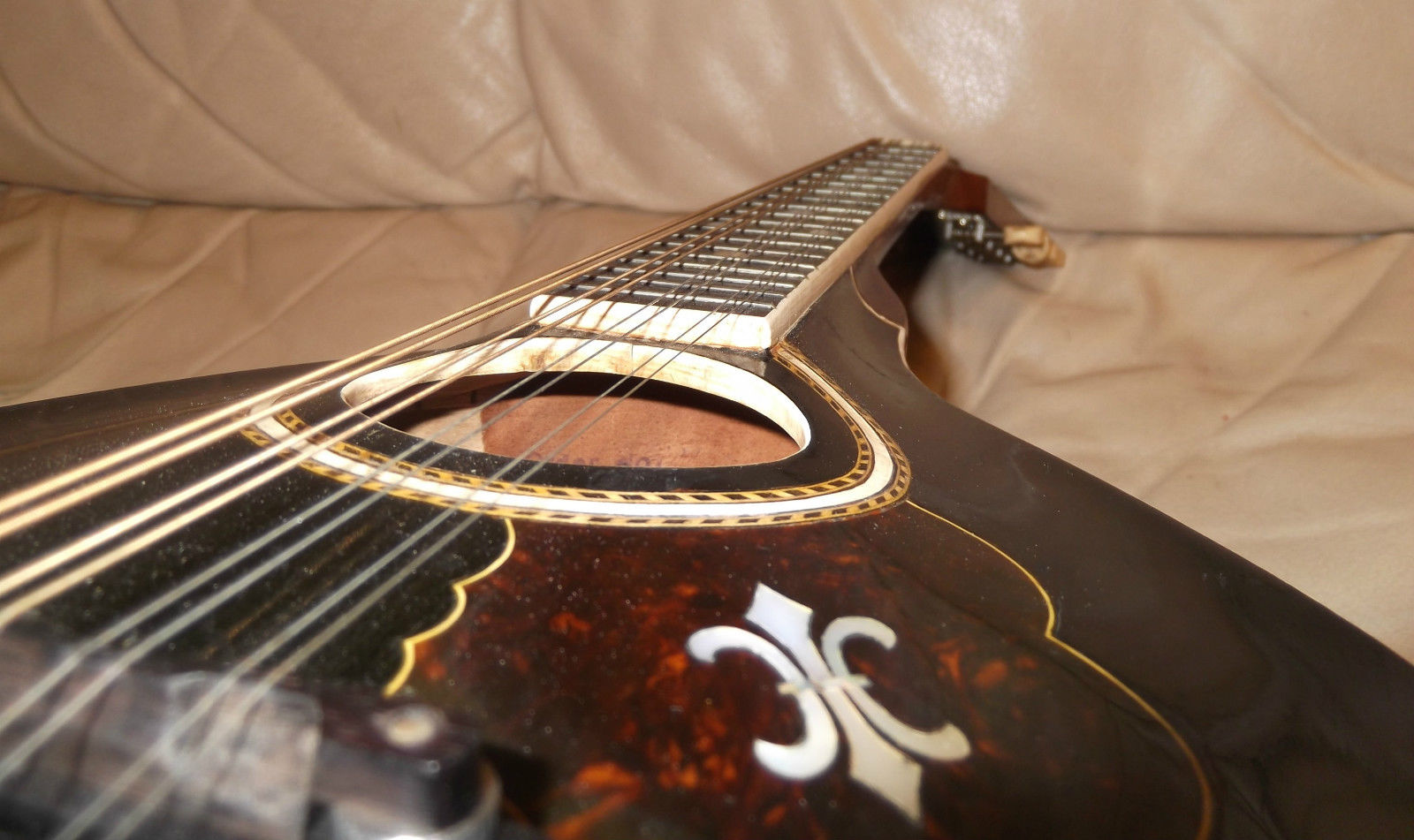 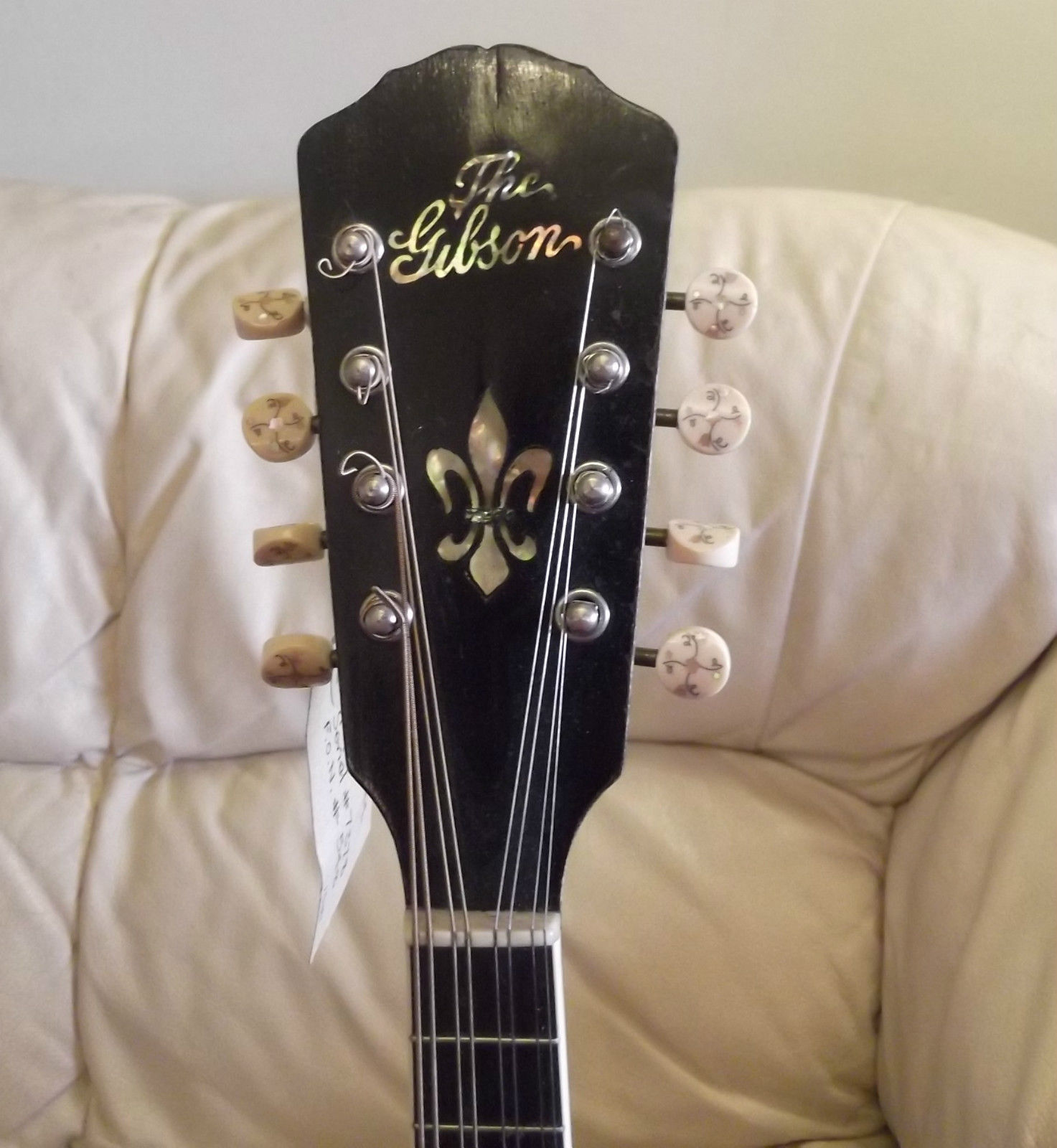 Catch of the Day: 1965 Mosrite Ventures