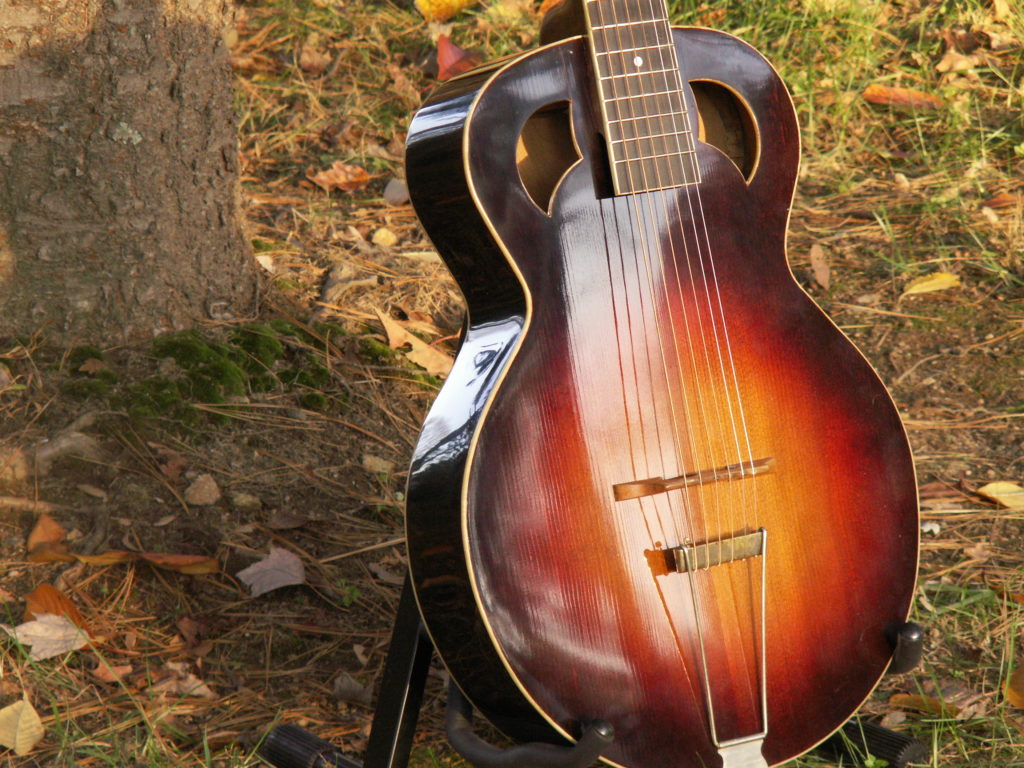 The author’s Gibson Army-Navy GY Special “cat’s eye” guitar, one of the more mysterious instruments to be built by Gibson.

Every major manufacturer of guitars has its rare birds, instruments that, when found, give you that feeling of excitement and surprise all at once. Often this feeling is then followed by thoughts of all the items you would have to sell to obtain the newly located treasure. There are the pre-war D-45s, the AJs, the K-5 mandocello (the K-4 could also probably be included), random tenor versions of different standard models and early rare examples built by the namesakes of the major companies. Each one of these, as the saying goes, is as “rare as hen’s teeth.” Then there is the Gibson Army-Navy GY Special “cat’s eye” guitar. It’s the Keyser Söze of guitars. There one day, then… poof… gone, forgotten.

Other coveted models are rarely seen but pop up from time to time. They are listed in catalogs, noted in reference books, priced in guides and procured by dealers and collectors. But that’s not the case with this special variant on the Army-Navy design by Gibson. Not one mention of it could be found in any text from either the Gibson company or one of the many publications from Gruhn, Carter, Bacon or the like.

Other than the one documented here, there is only one set of photographs of another that could be located. That guitar was put up for auction a few years ago by the Skinner auction house. So, for posterity’s sake, let’s share the details of this odd Gibson that never really existed. 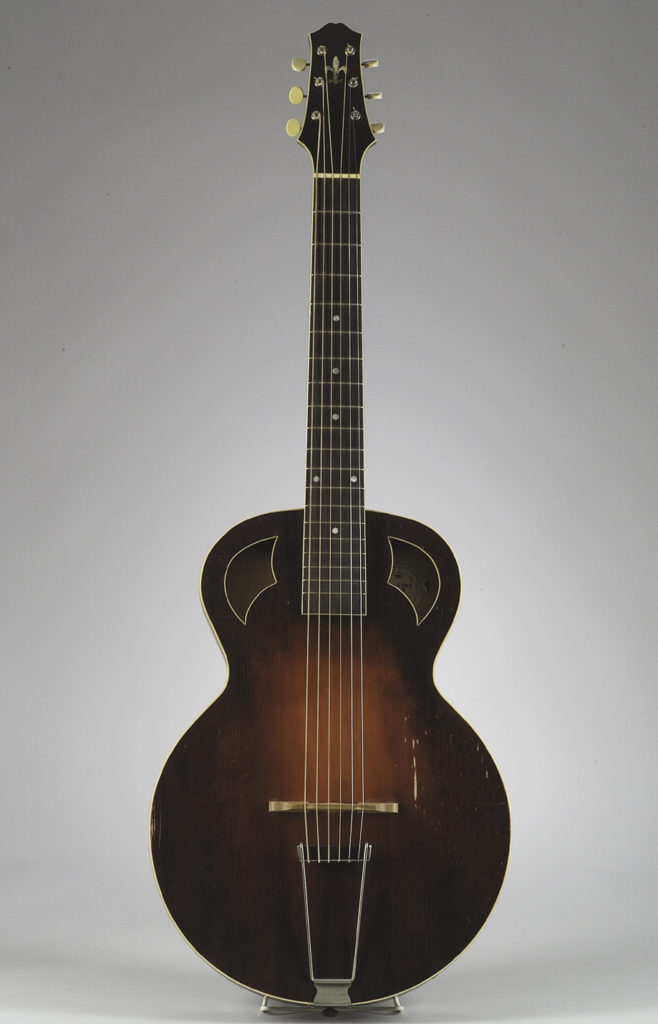 I purchased this guitar from Gruhn guitars of Nashville as an “as-is” project. It appeared to be a restoration endeavor that someone took on and then stopped, either from lack of motivation or skill. Gruhn had it listed as a circa 1924 extremely rare, Loar-period experimental model with upper bout soundholes. Since in the back of my mind I had a vague recollection of seeing the one from Skinner, I jumped at the chance to own this one.

It is the peculiar combination of features that make this guitar so fascinating. To list a few: there are the double soundholes, flat top and back, extreme snakehead, raised fingerboard, Ivoroid heelcap and end graft, single fleur de lis, and the fact that some of these features differ slightly from the only other guitar documented. The attribute that’s most eye-catching, but perhaps not the most historically significant to Gibson, is the double soundholes. Nothing about these are normal for the Gibson company of the 1920s. They are, however, reminiscent of the Wappen style of guitar from Germany at the turn of the 20th century. These were shield-shaped guitars with double soundholes in the upper bouts that had an eyelike characteristic to them. Clearly they were an influence on this Gibson. Perhaps this model was a redesign to usher in a new high-end flattop as the newly designed L-5 was for the archtops? That one too has the double soundholes (f-holes), which to today’s eye seem commonplace on a guitar but in the early ’20s were a radical new look.

Along with a pair of soundholes on the top of this guitar, other Loar-era features can be seen in the snakehead headstock and the elevated extension of the fingerboard over the body. The headstock on the “cat’s eye” GY is a most extreme variant of a snakehead design. There is barely any room for the tuners. Each side of the tuners hang over the edge just ever so slightly from the side of the headstock and fit snugly in the abbreviated space given lengthwise.

At first glance, the example here and the one offered from Skinner at a past auction appear to be the same. But there are differences. The size of the soundhole openings on the top are slightly larger on the Skinner example. There is also a slight deviation in the shape of the headstock, with Skinner’s having a more tapered top. Oddly enough, this variant on the headstock shape has more recently shown up on modern Gibson models like the Pat Martino Signature model as well as the ES-336 and DC Pro. Which leaves the question: who at the current Gibson company is familiar with this design?

Other high-end details of the guitar can be seen in the single fleur de lis, used as the only headstock ornamentation. The use of this single adornment was previously seen only on the top of the line archtop prior to the L-5, the Style O. There is also the Ivoroid heel cap and end graft. I can’t recall seeing the latter on any other Gibson model of the period.

The trait that this guitar does hold in common with its namesake, the standard Gibson Army-Navy GY model of 1918–21, is the fact that it is a flattop guitar. The original Army-Navy was a less expensive model put out at the end of the World War I. The GY was not considered to be a “real Gibson,” and Gibson would not officially introduce a flattop model guitar till 1926. When they did appear, a more standard, single round soundhole design was used. For the most part, they were geared as lower-end instruments. The concepts that are shown in this rare guitar were gone.

Luthier, author and fellow Gibson enthusiast Paul Fox coined the term “cat’s eye.” His website shows two patents, one from 1917 and one from 1920, that give some insight as to where some of the design features may have come from. According to a post on the Unofficial Martin Guitar Forum, Fox explains, “The Cat’s Eye guitar (just a name I call it) has to be related a 1917 patent by Gibson legend L.A. Williams, and A.J. Reams (son of Gibson founder Sylvo Reams). Similar soundhole design, and distinctive ‘snake-head’” style peghead.” It also shows the elevated fingerboard “which many believe was the invention of Lloyd Loar, Gibson’s acoustical engineer.” The patent itself states, “The instrument is provided with an outwardly tapered head…the series of tuning pegs are disposed to converge outwardly.” This could be the first reference to a snakehead headstock by a Gibson employee, and at about four years before we see them on Loar’s instruments. This guitar gives us a real peek inside the heads of Gibson’s R&D team from the early 1920s.

Restoration of this instrument was done by Bil Mitchell and Sarah Dieterichs of the Guitar Parlor in Riegelsville, Pennsylvania. The guitar arrived to them with no finish on it, no frets, the original binding still there but not attached to the guitar, and a few cracks in need of repair. For the finish they decided to go with a blonde shellac. Bil stained the sunburst rather than tinting the shellac for a more authentic look. And while the guitar has many high-end features, it was clear to Bil, Sarah and myself that the build quality was not on par with the other more famous dual soundhole Loar-era guitar and more in line with the L-3 of the era.

I consider myself to be a Gibson nut. Each year I think, “I know Gibson.” I know all the models, the odd birds, the one-offs. Then something I have never seen pops up. I think, “Wow, now I have really seen everything!” Then it happens again. So what will be next?

Still and All: Richard Thompson Looks Forward and Back