Everybody wants to play with Bill Frisell. Over a recording career that spans almost forty years and hundreds of recordings, Frisell has flourished as a band leader, bandmate, and sideman, working with musicians legendary and unknown, across different styles, live and in the studio. He’s performed with jazz legends, symphony orchestras, and huge pop stars, from Ron Carter to Paul Simon, Renee Fleming to Richard Hell, Marianne Faithful to Elvis Costello. Here at the Fretboard Journal, we’ve thrown him into the fire with John Pizzarelli, Matt Munisteri and Tim Young (not to mention his collaborations with Joe Henry and Blake Mills at the first Fretboard Summit) and he’s dazzled us without fail. That said, we’ve also been privileged to see Bill all by himself, performing solo, just him and a guitar (and occasionally his trusty Line 6 DL4)…

Given our constant joy with these performances, and knowing that he is not one to shy away from adding solo gigs to his busy calendar, it’s a little surprising that Bill’s latest release, Music IS, is only his second official solo album, after 1999’s Ghost Town (though a solo performance from Grace Cathedral in San Francisco from March of 2007 is available as part of his Live Download Series and there is his Solos DVD as well). The new album is splendid, of course, comprised entirely of Bill’s compositions, some new, some old. Bill’s visits to our offices, however, always involve Bill playing other peoples’ music. Here, to set the stage and whet your appetite, are a handful of our favorite Bill-All-By-His-Lonesome performances at the Fretboard Journal, in no particular order…

This performance from December of 2012 was part of our “Twelve Days of Fretboard” celebration. Bill later recorded it for his Guitars in the Space Age! album, but this version will always hold a special place in our heart.

“A Change is Gonna Come”

Bill plays this song a lot, in a wide variety of settings and circumstances, as an affirmation and as a plea. He pulled it out on his most recent visit, shortly before he moved back to New York City, and it fairly oozed portent.

Standards are not standard fare for Bill’s solo visits, usually, but on this particular occasion, perhaps with that Steve Andersen archtop affecting the mood, Bill pulled out a couple tunes from the Great American Songbook, including “Embraceable You” and this version of W.C. Handy’s classic.

This traditional folk song is another staple in Bill’s repertoire, performed regularly and recorded on his Good Dog, Happy Man album as well as the live recording East/West. He played the song for us on a borrowed 193os Gibson L-00, and it turned out pretty okay…

“It Should’ve Happened a Long Time Ago”

Bill’s relationship with Paul Motian dates back to his earliest days in New York City (Motian’s album Psalm is one of his earliest credits), and his relationship with this Motian composition goes back almost as far (it is the title track of the Paul Motian Trio’s 1985 release and the opening track of Trio I Sm, another Paul Motian album, recorded with Bill, Joe Lovano and Dewey Redman in 1993). Bill had been playing it in his duo project with Thomas Morgan (it is also the opening track on their live album, Small Town) and put together this solo arrangement for the aforementioned visit before he left Seattle, reducing the room to tears.

You can find all of our videos with Bill Frisell on our YouTube “Bill Frisell at the Fretboard Journal” playlist. 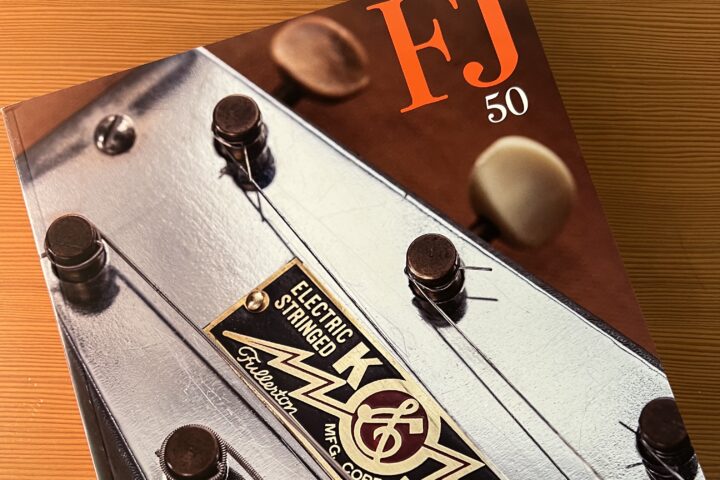