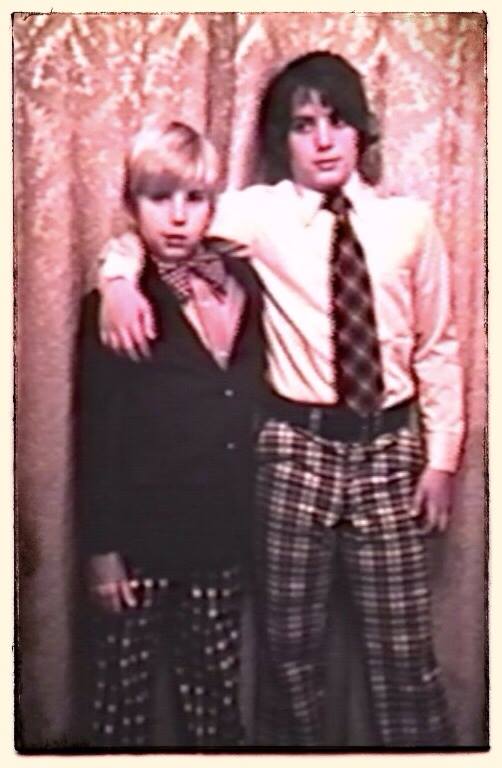 The author (left) and his cousin, Tony.

My cousin Tony isn’t like the other kids. Never has been. He’s always said he was born too late. A child of the 1970s, he’d have been much more at home in the 1570s, or 1670s, even 17- or 1870s. He digs ice fishing and sailboats. He sent me a video of him playing a sea shanty on the accordion, perched high on scaffolding when he was supposed to be painting his house. His texts are runic, somewhere between Morse code and abstract poetry. A few years older than I am, he’s responsible for turning me on to Jethro Tull and Yes and a big part of why I play guitar at all. He started studying classical guitar when he was around 10 or 11, and he definitely had a knack for it. Tony’s mom, my Aunt Adia, and his grandparents on her side, Nonni Mary and Dominic, were very musical, and it manifested overtly in Tony’s fingers.

If Tony had restricted himself to playing guitar, who knows where he’d have ended up, but he’s curious by nature, drawn in multiple directions, musical and otherwise. He can play anything with strings on it, and play it well. I’ve seen him make beautiful music on sitars, banjos, Viola de Gambas (Violas de Gamba?)… Early music is a passion, a passion shared with his lovely wife, Nancy. They play together frequently around Portsmouth, NH, in all manner of venues, from church services to Celtic jams in pubs.

A little while back, Tony hit me with a typically cryptic text, the gist of which was that he’d recently traded a Gretsch hollow body for a 10-string Dauphin classical guitar, “with the idea of learning Baroque stuff.” He was tuning the guitar f-a-d-f-d-A-G-F-E-C, but he said, “it made playing it awkward and complicated.” What he needed was to be able to tune the guitar f-a-d-f-d-A-G-F-E-D—C, so, 11 courses.

“So,” Tony told me, “did my own luthier-ing surgery on it, with the help of 3-penny nails, and screws and a bass tuner…” The photos came in a rush, and it was pretty much horrifying. 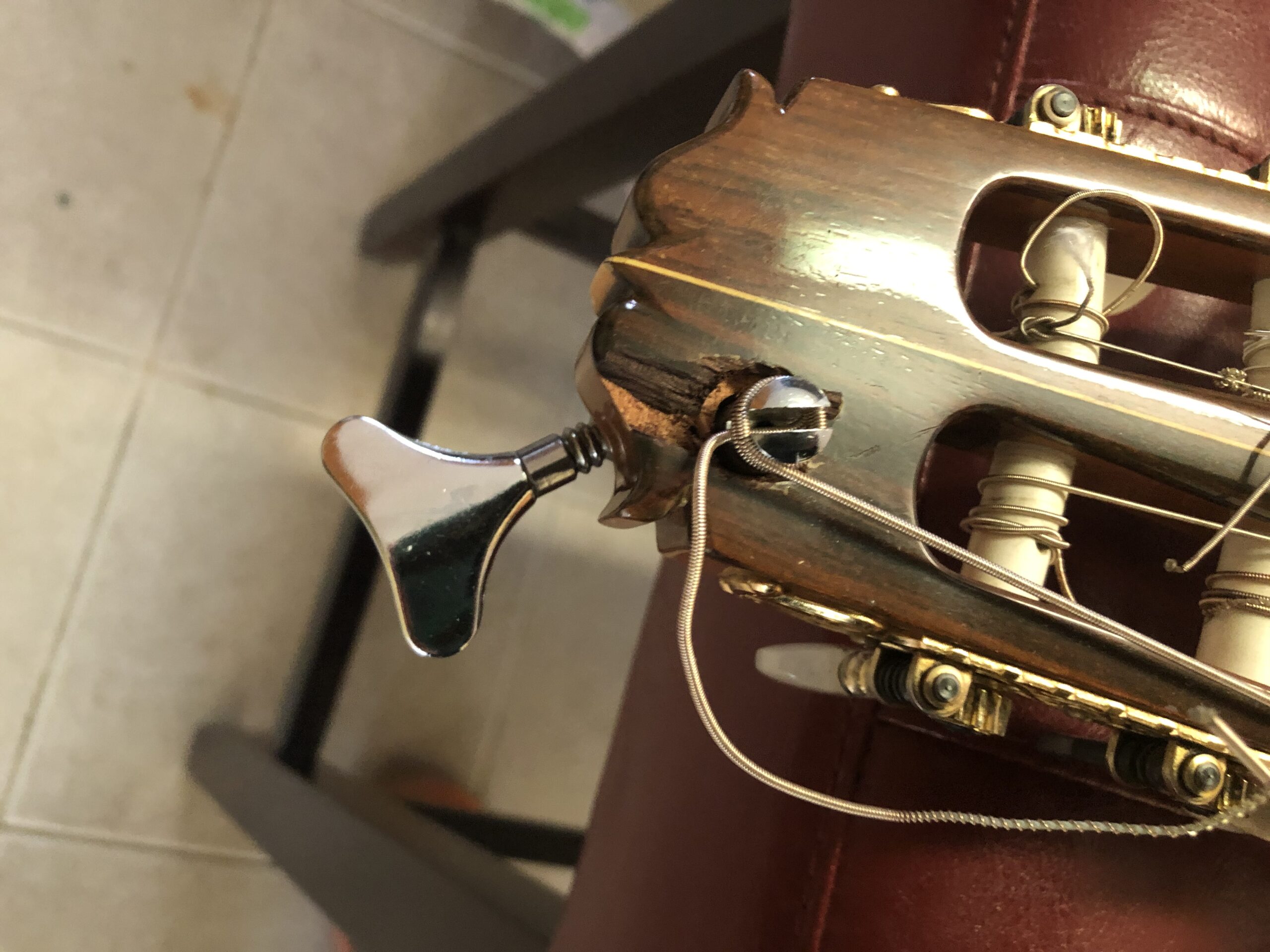 “I added the 11th course. Lots of vibration and buzzing. Still toying with the proper strings.”

And another photo, with his solution for the rattling bass tuner… 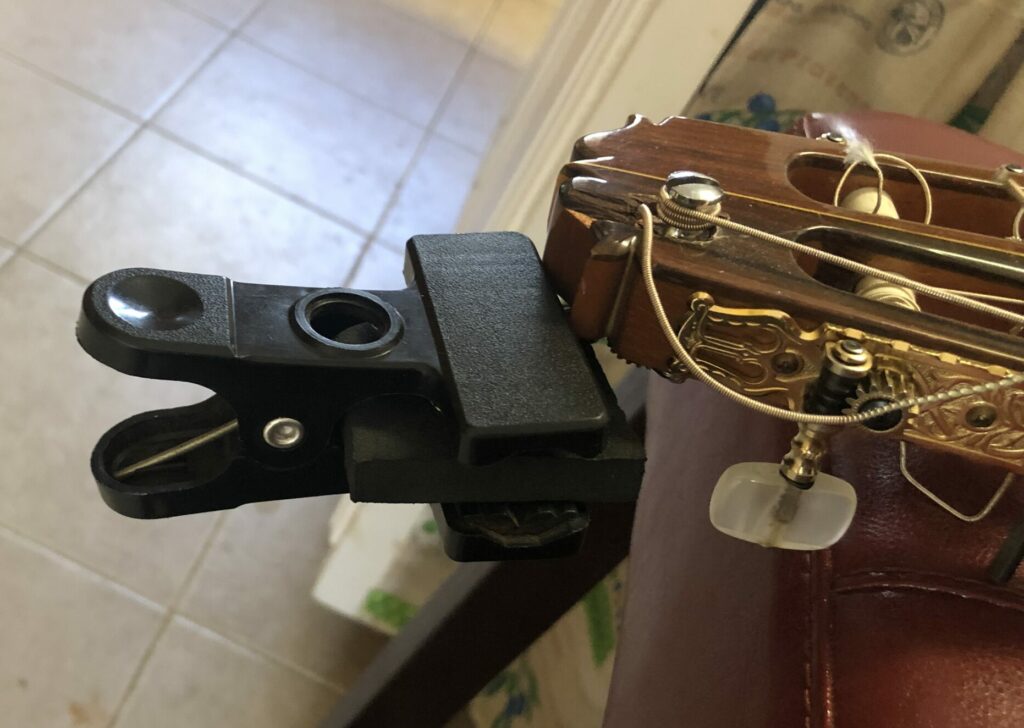 I worried about the strength of the neck. He pointed out it’s a pretty massive piece of wood, and followed up with a video of a performance of the François Couperin composition “Les Barricades Mystérieuses,” a piece I used to nag Tony to play over and over again in childhood (blame the Christopher Parkening recording on  Parkening and The Guitar — Music of Two Centuries). I don’t know if he chose it because of that, but it did the trick. The horror lifted and I was more or less awestruck. Whatever I thought about his MacGyver-style lutherie, the end result sounded pretty damn good. See (and hear) for yourself.

This, needless to say, is one of the many reasons I love my cousin Tony. He may be a man out of time, the proverbial square peg, but the purity of his spirit is relentless, shining through no matter the circumstances. And just to drive it home, a couple weeks later he sent along another video, with a tidier performance of a courante by, as Tony put it, “my patron saint, Ennemond Gaultier.”

He followed that up with a quick primer:

“There were two Gaultiers: Ennemond ‘the vieux’ (elder) and his cousin, Denis (the Younger). There’s debate over who wrote what. It was the French who brought the lute to new levels with the new tuning.” 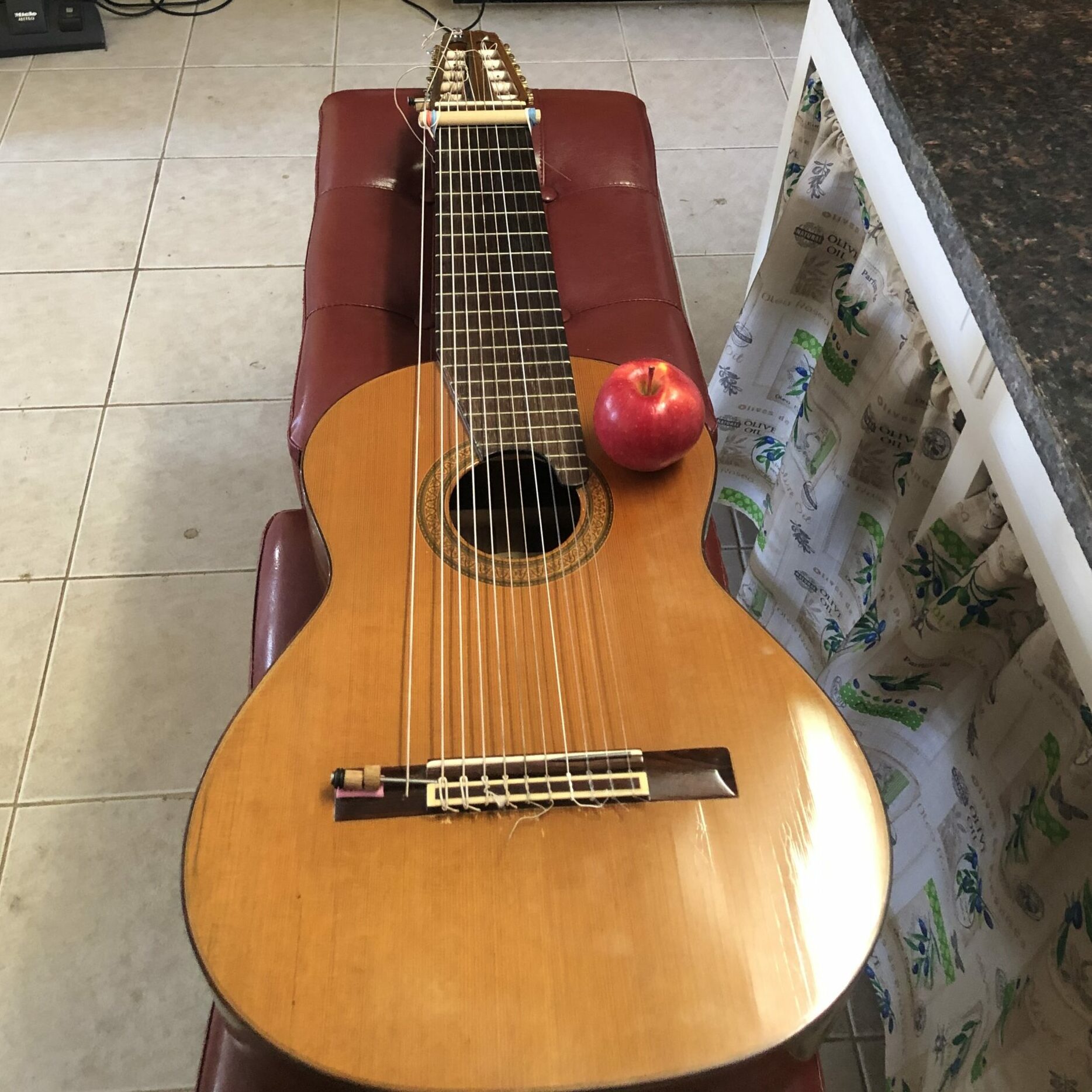 “I’m playing on borrowed time.  The bridge may be tweaking. You can see  a definite lift/bulge around it. It may have been re-glued before. It also may have a cracked brace in there.  I am back to playing low tension strings and shifted the big telephone cable strings off  to reduce stress. Using two E basses for 9 and 10 and an   A  for 8, tuned f-d-a-f-D-A-G-F-E-D—C, but lower, to B♭ when open [i.e. e♭-c-g-e♭-C-G-F-D-C—B♭]. What a f’in’ mess. It’s a whole tone down, so C minor instead of D moll [minor]. I know what you’re thinking: Capo second fret. Buzzy, and a loss of resonance.

“Playing this stuff has kept my sanity through the long winter Zombie Apocalypse, but you might wanna think twice about doing a write-up. Most people will say, ‘Why doesn’t he just take up the ukulele?’” 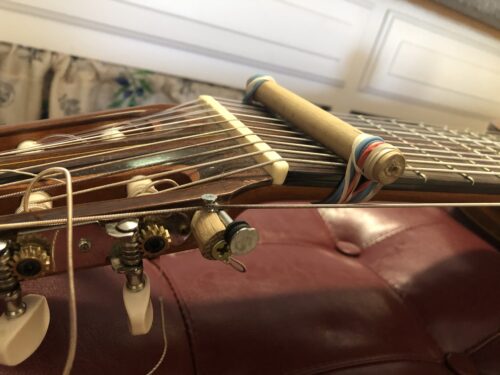 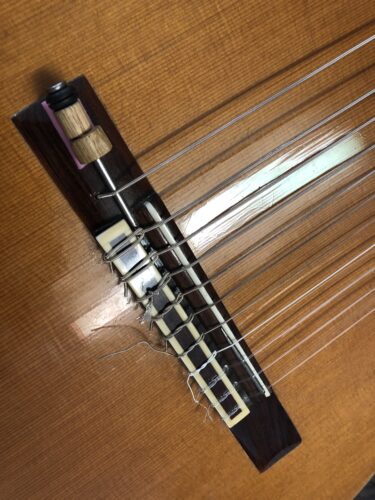 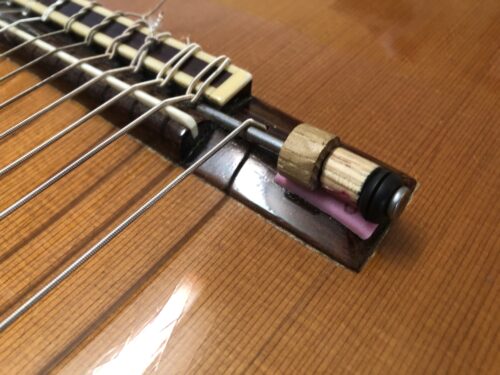 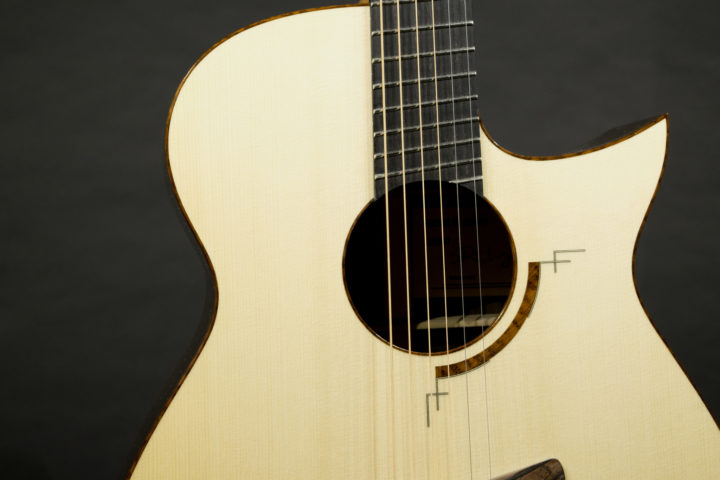 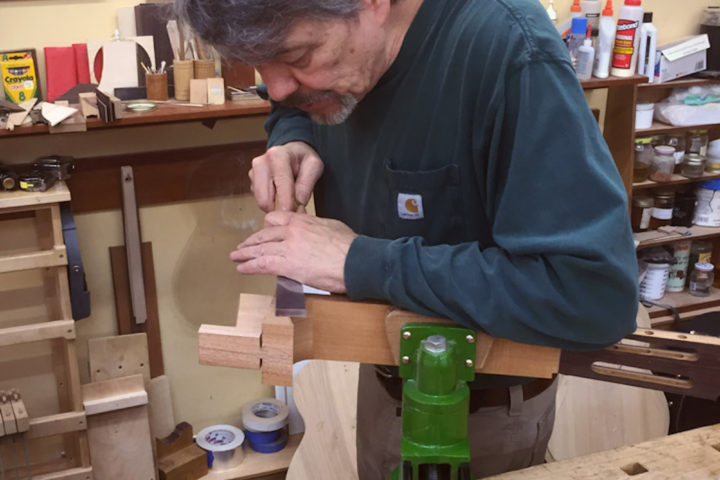 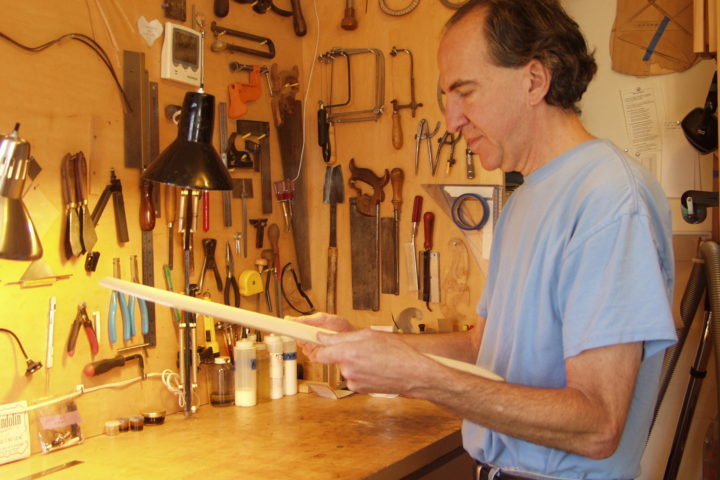