How blue was the sky? Lean back, elbows locked, hands out-turned, fingers splayed in cool grass as you slip past blanket’s edge… k.d. lang’s voice–the biggest whisper in all the world–builds and dips in a minor key and a baritone guitar solo emerges in reply, plaintive and furious… That’s how blue was the sky, bluer than the flame in k.d.’s song. 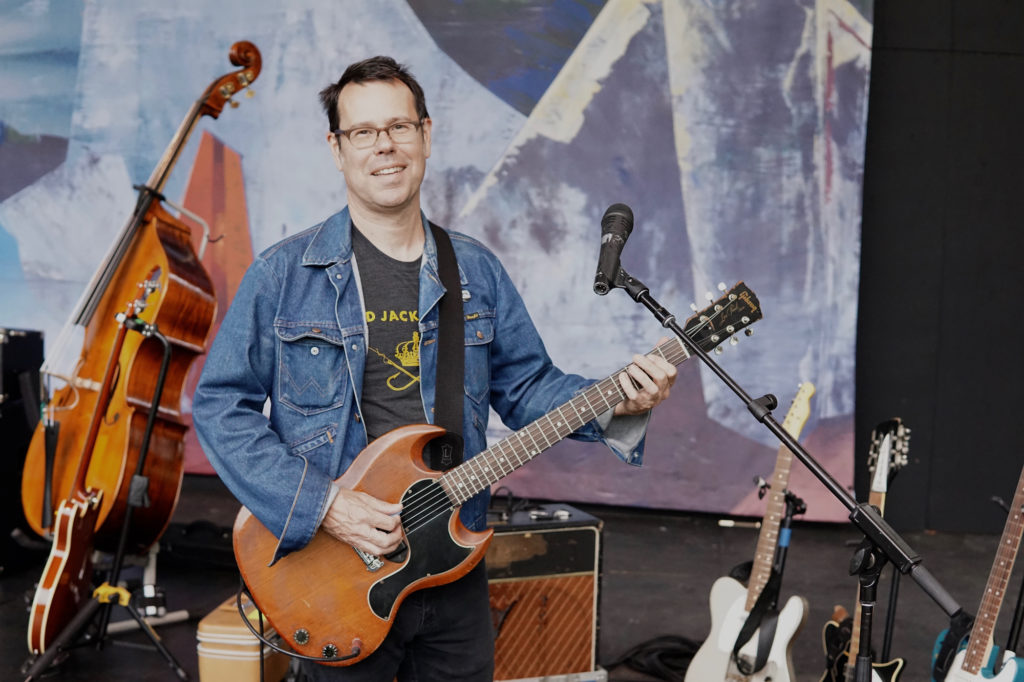 And that’s summer in a nutshell for lucky music fans–“event” tours take advantage of the season to do a circuit through wineries, zoos and festivals, sometimes mining nostalgia and occasionally in support of an actual release, as with this summer’s case/lang/veirs tour, on the heels of their Tucker Martine-produced eponymous release. The album featured the fine fretwork of Tim Young (apparently the “Best Kept Secret” in Silverlake), but for this tour the role of the guitarist was assumed by Johnny Sangster.

Johnny is a skillful, versatile player, but he doesn’t usually hit the road as a sideman on a major summer tour, so taking this job came with a few challenges, not the least of which was putting together a rig that could cover the material from the album, the three artists’ back catalogs and the customary cover or two.

Not that Johnny’s complaining–it’s a challenge most guitarists would welcome, an excuse to experiment with their setup and, who knows, maybe it gives you an excuse to buy a new something-something as well. Not everyone gets that chance, but we were lucky enough to experience it vicariously through Johnny, who let us look over his shoulder as he got himself sorted. We sat down with him just before rehearsals began, then again when the tour passed through Seattle to talk about the process. 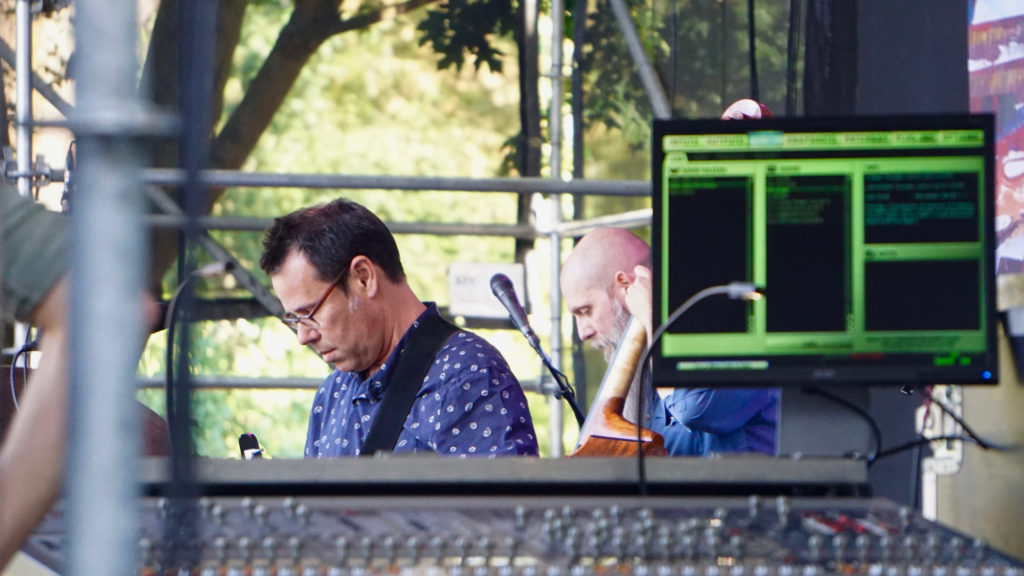 Fretboard Journal: What were your first considerations, in terms of setting up your touring rig?

Johnny Sangster: The main thing is, it’s a kind of music I’ve played before, but I think, not knowing the band–pretty much everyone is walking into this having not played in this band before–I’m just trying to prepare enough to be flexible for whatever happens, and also, the record has a bunch of parts that are covered by other instruments that won’t be there. There’s a song that has a clarinet duo that could be my part, or I could have the pizzicato strings part, but there isn’t a real obvious guitar part. There’s some of that, that’s just, what role am I going to take? There hasn’t been a real clear, “OK, you’re going to play this part,” so I’m just trying to know the songs as well as I can and have enough sounds within my palette that I can jump in and play whatever.

The pedalboard is basic, really, just kinda covering my bases: Delay, reverb, tremolo, overdrive, which I’m still kinda figuring out which ones, but I think the Full-Drive [2] is gonna go, because it is super-versatile, and then some other kind of a fuzz box would be good.

Then I’m bringing two amps with me to [rehearsals in] Portland [a drip-edge Deluxe Reverb and a pre-Top Boost AC30], and I kinda hope I can take both on tour, but… if I shed one I’ll have less to think about, as well.

FJ: How does reverb play with your AC30?

JS: It sounds great–my favorite thing is to use a Fender reverb tank in conjunction with the AC30. This AC30 is not very bright; it’s less gain-y and less bright…

FJ: But still as heavy…

JS: Exactly as heavy! I dunno, it might be… it’s got a couple less tubes than the Top Boost, and now it’s got a flight case, so I’m not going to be lifting it up myself any more. 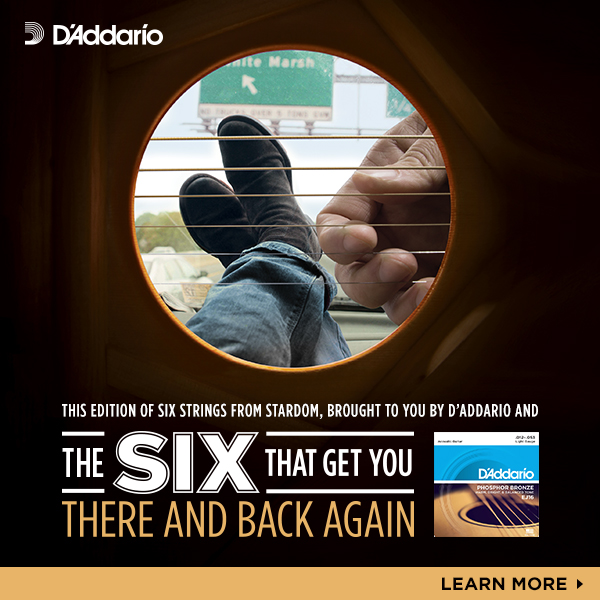 FJ: What are you bringing guitar-wise?

JS: Well, I’m bringing my Nash Tele, which I just got last year, which I love. I’m bringing a Creston baritone guitar; the Creston is amazing, what a fucking great instrument, and there’s quite a lot of baritone on the record, so that is gonna get some use for sure. I’m bringing my [’61] Les Paul Junior, just to have a second six-string, and also I know that guitar so well that it’s nice to have it around. And the latest addition is a 12-string–I’m bringing a Rickenbacker, which I have a feeling I’m only going to use on two or three songs, but there’s one of ‘em in particular that it’s important. I like the sound of the Rickenbacker; it’s a little harder to play, because the neck is so skinny, but… 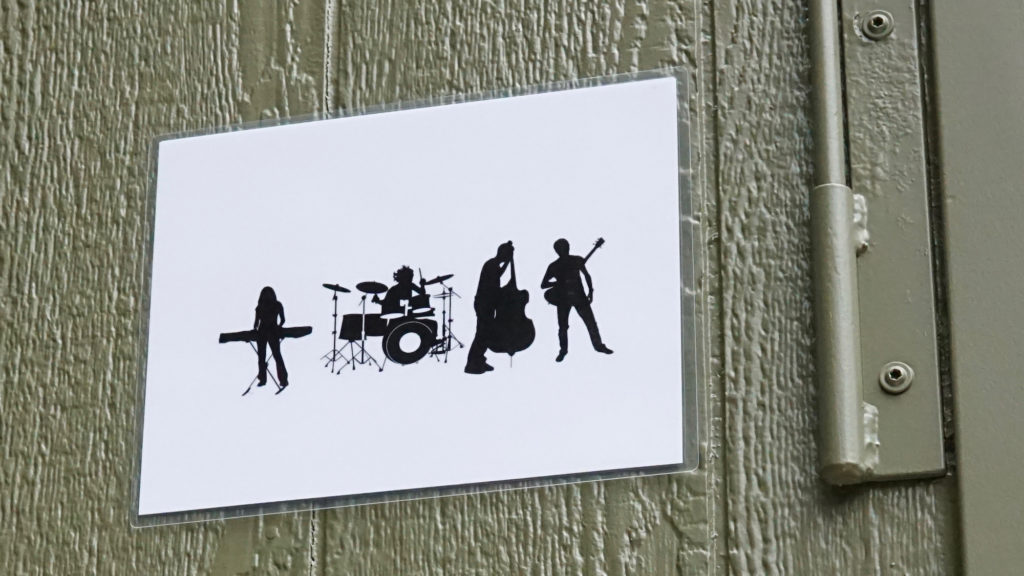 FJ: So, how’d it all come together?

JS: Well, I think the last thing was finding an overdrive pedal that fit, mostly because I can’t play the AC30 to its comfortable volume. But it’s kinda interesting because it actually has more headroom when it’s quieter. You put a couple stages of boost in front of it and it can get twice as loud, which I never really experienced when I’m playing it opened up–I can control it more with the volume of the guitar, then hit the boost pedal and, yeah, it gets louder but not twice as loud. I’ve actually ended up playing most of the set with the Greer Sucker Punch on, so it’s part of the grit factor. Every once in a while I’ll turn it off to make it as clean it can be, but mostly it’s in there.

FJ: What’s been the biggest challenge?

JS: Getting used to all the pedal moves. I’m not really a pedal guy, so getting my dance steps… Learning the music was one thing, but wasn’t, in some ways, as hard, then tailoring the parts. I guess I knew that would happen; Steve [Moore, keyboardist] and I are filling in a bunch of the extra stuff on the record, and it can’t be like the record because we don’t have a string section. Then, figuring out how loud to be, where and when.

The other thing is outdoor shows, with the tuning, has been interesting. We just came from two nights in theaters and it’s so much easier. The shows we’ve been playing, we go onstage 8:30-ish, it’s been hot all day and then it’s starting to cool off, and every time you pick up a guitar it’s like, “Oh fuck! Tune it into submission…”

FJ: And the 12-string, which you capo sometimes…

JS: Yeah, the solution is a second 12-string, which is kind of ridiculous, but since I don’t have someone to tune it for me…

FJ: Back to the dancing lessons… Are you doing a lot of changing in the middle of a song, or is it set things up at the beginning…

JS: No, there are quite a bit of tunes where I’m hitting the pedals as I go along, either adding boost or tremolo, and there’s been some different settings on the two Strymon pedals, twiddling switch positions and knobs between songs. I’m mostly using the spring setting on the Strymon ‘verb, but the ‘80s plate is also pretty lush and long, so there’s a couple of tunes I use that. The tremolo on that is good, too, but I’m not using it as much as the slow Mini Fooger, which is cool for some of the ballad-y things.

FJ: Sounds like you haven’t run into any serious challenges.

JS: No. It’s performing now. I can get pretty much what I want out of it. I guess the only thing that I’ve been getting used to is that with all the different guitars, they all react differently to those pedals. The Rickenbacker’s such a quiet guitar compared to the Tele. Even the baritone’s pretty loud…

FJ: Have you thought about adding a boost just for the Ric?

JS: Yeah, I’ve thought about that a little bit but, I feel like, I’m at a pretty good point, it’s pretty streamlined, there’s not too much happening…

Judging from the show that followed our conversation, Johnny’s definitely at a pretty good point, and being at the zoo, you can’t help thinking about the risk of upsetting ecosystems. Butterfly farts and whatnot. He put together a well-balanced rig with a tonal palette that covered everything from the lilting, jazzy waltz of the aforementioned “Blue Fires” to the neo-twang of Neko’s “Hold On, Hold On,” from the lush pop of k.d.’s “Constant Craving” to the raucous cover of Patti Smith’s “People Got the Power” that closed out the evening, the last notes of the last chord from that Creston baritone ringing out across a still-blue sky. 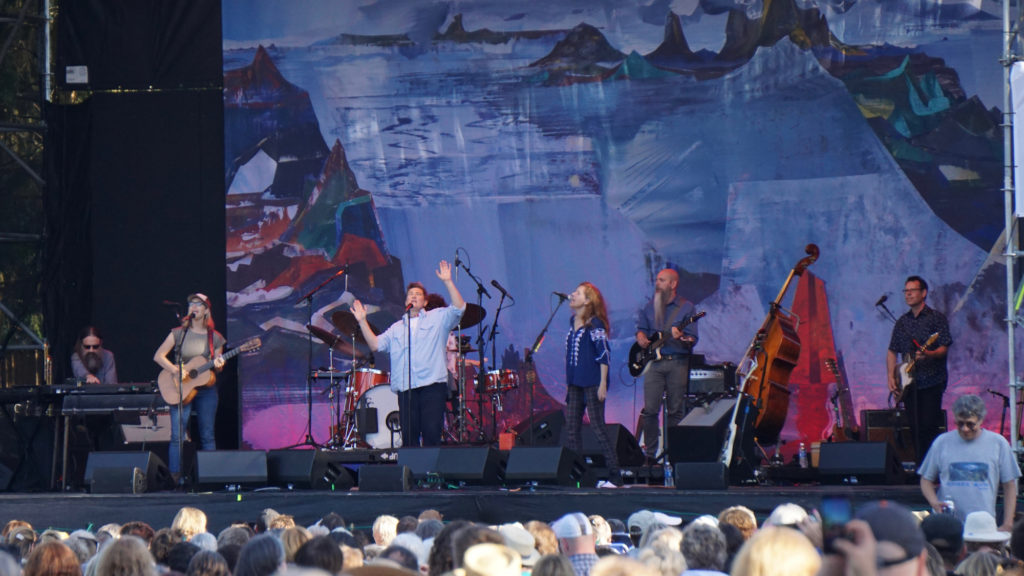 For the case/lang/veirs tour Johnny went on the road with a 1961 Gibson Les Paul Junior, a 2015 Nash T-63, a 1981 Rickenbacker 620/12 and a 2012 Creston baritone, tuned A-A. A 2016 Danelectro 12SDC 12-string was procured during the tour to ease the (re-)tuning difficulties inherent in using and removing a capo between songs. Johnny’s running them all through his 1960 Vox AC30, mic’ed up with a Royer R-121 ribbon microphone. The final setup for the pedalboard was (in order) TC Electronic Polytune > Greer Amps Sucker Punch > Lovepedal BBB > JHS Prestige > Strymon El Capistan > Moog MF Trem > Strymon Flint (check out some shots from its evolution, below). 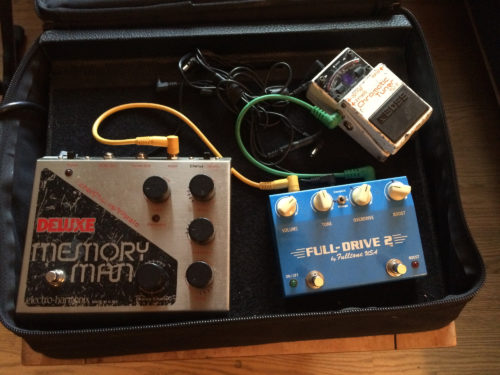 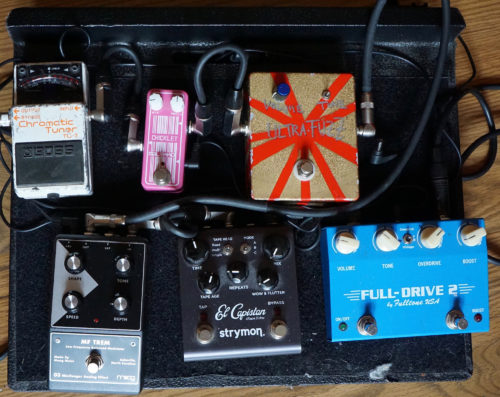 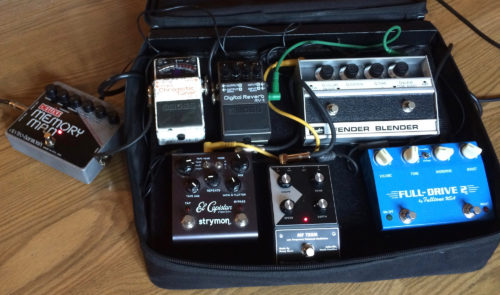 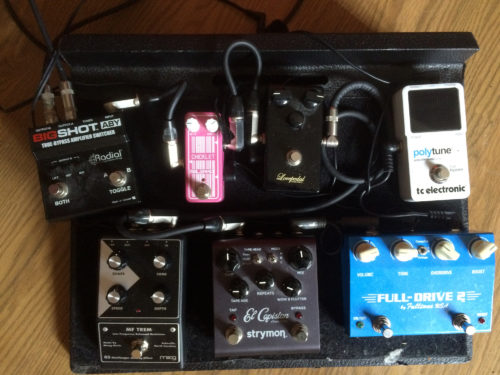 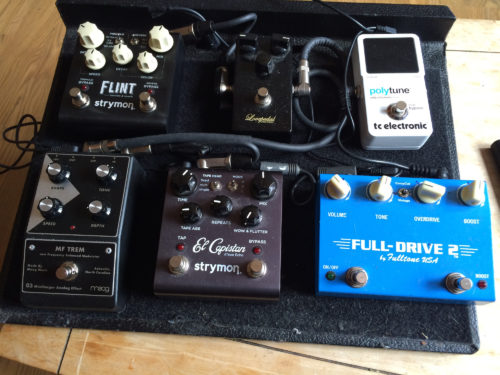 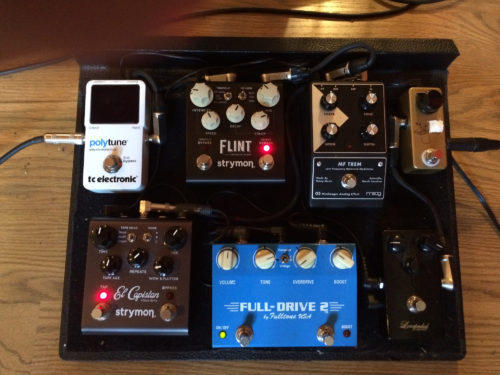 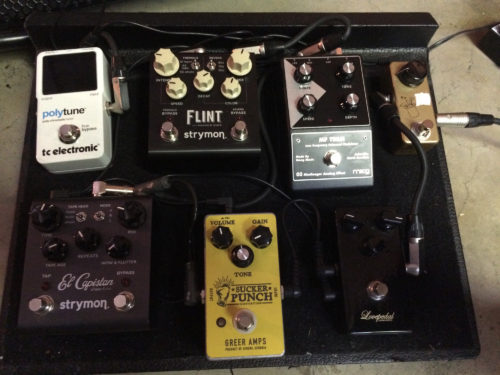 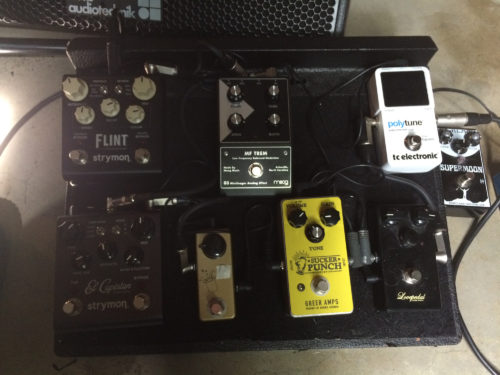 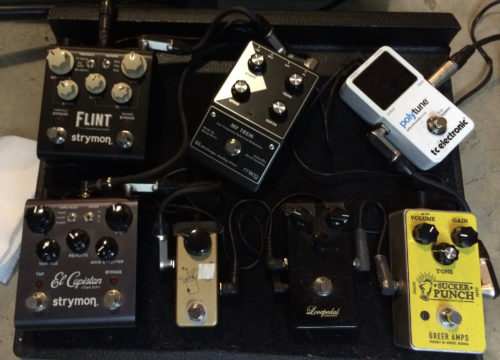 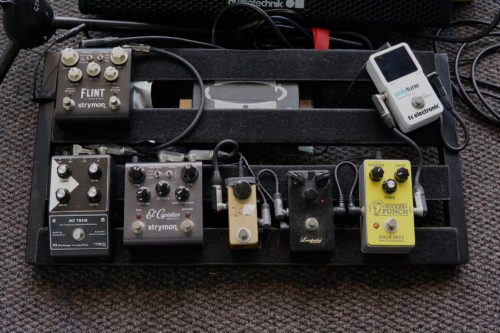 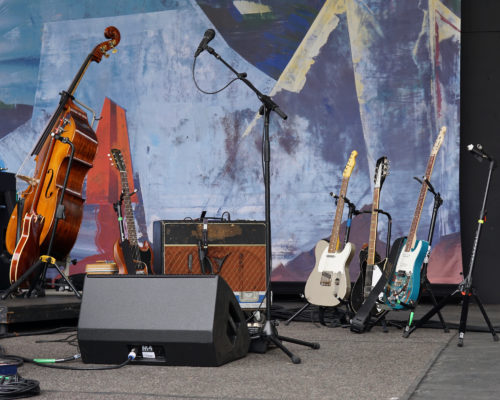 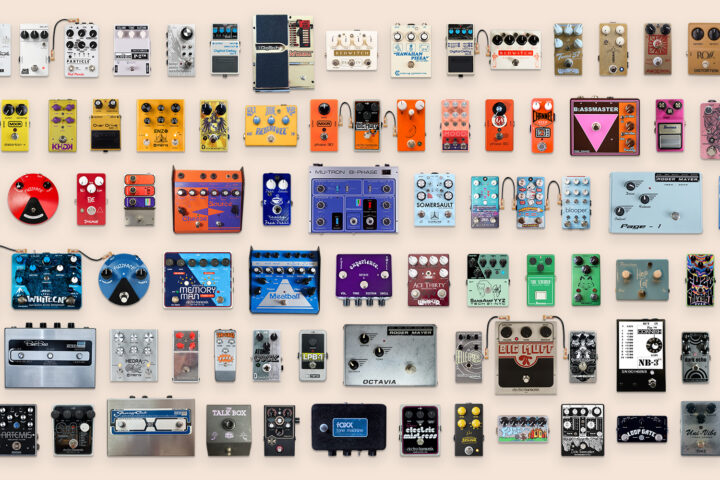 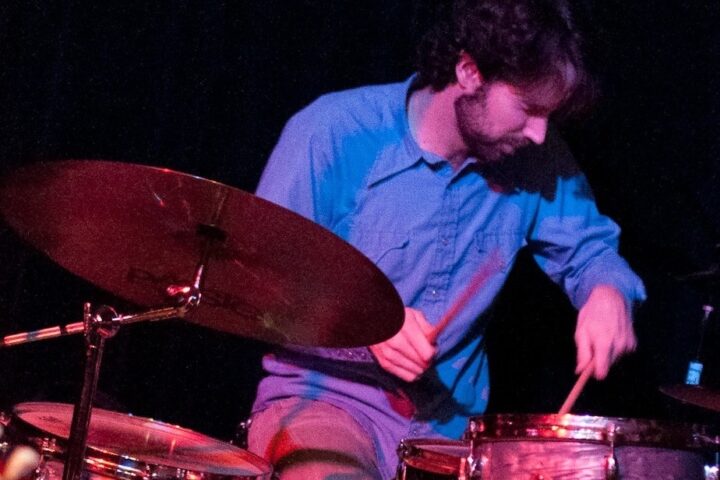 The Truth About Recording & Mixing, Ep. 3