“I got a Passport, officer…
This time you ain’t getting what you want”  -“Passport” by Gogol Bordello

You may recall that in March of 2013, at the Meeting of the Parties in Bangkok, Thailand, officials of the Convention on International Trade in Endangered Species of Wild Fauna and Flora (CITES) adopted a resolution creating a “Musical Instrument Certificate” that will function “as a type of Passport that allows the non-commercial movement of the identified musical instrument across … borders upon presentation of the original Certificate to the appropriate border control officer.” “Non-commercial use” includes “personal use, performance, display or competition.” The border officer must treat the Certificate like he or she would treat a Passport and mark it “with an ink stamp, signature and date to show the history of movement from State to State.”

The CITES officials adopted this provision in response to clamor not only from individual traveling musicians, but also from organizations like the League of American Orchestras, the American Federation of Musicians, The Recording Academy, and the National Association of Music Merchants (NAMM). The Passport resolution noted that “musical instruments … are frequently moved across international borders.” Many of these instruments contain materials that CITES restricts, like Brazilian rosewood, ivory and Hawksbill Sea Turtle (usually referred to as “tortoise shell” and used for picks and pickguards and binding on some vintage guitars). As a result, “such movement needs to be monitored closely to prevent illegal activities.”

Carrying such an instrument across international borders is legal if the substances it contains were incorporated into it pre-CITES (1947 for ivory, 1973 for Hawksbill shell and 1975 for Brazilian rosewood). But, you still need import and export permits for each country you enter and leave during your travels with the instrument. The treaty does provide for an exemption from the permit requirement for hand carried luggage, but not all of the 178 member countries recognize the exemption. Moreover, some of those that do observe the exemption implement it in ways that aren’t helpful to most touring musicians. The US exemption, for example, doesn’t apply to Appendix I species – yep, Brazilian rosewood, ivory and Hawksbill Sea Turtle. The European Union exemption only applies to EU residents. So, for legal entry and exit you need either those permits or, now, a “Passport” that will let you travel legally and permit-free to multiple countries. The Certificate/Passport is valid for three years and may be renewed.

The consequences for violating CITES by crossing a border of one of those 178 countries sans permit or Certificate/Passport with your guitar bearing restricted substance are extreme: permanent seizure with no provision ever to get your instrument back. Enforcement against traveling musicians has been rare, even close to non-existent. But would you want to risk your pre-war Martin that sports a back and sides made of Brazilian rosewood?

I thought not. So, you’re going to get one of those new Certificates/Passports for your next international journey with your instrument, right? Wrong. They don’t yet exist. Really. The CITES folks decreed the Passport solution on March 13, 2013 and the proposal became effective in the US ninety days later, on June 12, 2013. But, as the US Fish and Wildlife Service (FWS), the entity charged in the US with implementing and enforcing CITES, reports on its website, “We are in the process of developing a new application form for the musical instrument Passport program. …We will update this page when the new application becomes available.”

Hmm. So we know that CITES officials and FWS are aware that musicians travel with instruments containing materials restricted by CITES and that these musicians and their instruments “need to be monitored closely to prevent illegal activities.” But, the Certificates/Passports designed to address the issue don’t yet exist.

Because I plan this summer to travel internationally with my 1943 Gibson SJ and cognizant of the FWS notice that it will take the Service “at least 45 days to process” my application, if I even can apply, I phone FWS for an update. The website directs me to the Division of Management Authority, Branch of Permits, International Affairs and I dial, wade through the automated menu  and leave voice mail: “I’m planning on traveling this summer with a vintage guitar that contains Brazilian rosewood and I’d like to get a Musical Instrument Certificate for the guitar. The Fish and Wildlife website says that you’re still working on developing the application. Do you know when the application will be available?” About a half an hour later, a FWS agent returns my call. “We really don’t know when the application will be ready. We’re hoping for this summer. We’re still working on it and then we’ll have to send it to OMB [Office of Management Budget] for approval. So … we really have no idea.”

Great. So what do I do if I really want to travel, and legally, with my old guitar? Well, the FWS website provides two substitutes. If your instrument contains restricted animal parts, like ivory or tortoise shell, you need to fill out existing FWS Form 3-200-23. If your instrument contains restricted plant parts like Brazilian rosewood, complete Form 3-200-32. Got a vintage guitar with ivory binding and Brazilian rosewood back and sides? Complete both forms. I think. So, how will FWS know you’re trying to get a Certificate/Passport? In the words on the Service’s website, “Include a cover letter indicating that your application should be considered for a musical instrument Certificate (also referred to as a ‘Passport’).”

Armed with this advice and a wartime Gibson sporting Brazilian rosewood fingerboard and bridge, I download Form 3-200-32. What’s first apparent is that this certainly isn’t a Passport application. It’s designed for either single shipments or, if you are in the business of shipping whatever it is you’re proposing to ship, a “Master File” that will give you three year’s permission to ship out inventory that you now possess.

OK, I’m just planning on traveling with the one guitar, so I check “pre-convention/single shipment” and cut a check for the specified $75 fee.

Now, because this is a form designed to be used while shipping rather than schlepping a guitar, it requests that I identify the place to which I’m shipping the guitar. I figure the best I can do is to indicate that I’m seeking a Certificate/Passport. I’ll accurately list the guitar’s current location as at my home.

Now, what’s my purpose? Presumably the form contemplates “sale” or something such, but I’m just wanting to carry my guitar along for personal pleasure and the occasional annoying of small gatherings of undiscerning folks in pubs and coffee shops.

Form 3-200-32 also mandates that I provide a separate inventory of CITES-regulated items on my guitar. I’ll just state in the requisite cover letter that the guitar has “a fingerboard and bridge made of Brazilian rosewood (Dalbergia nigra).”

The form also has a provision applicable to the purchase or export of a “vintage guitar” containing Brazilian rosewood, so I indicate that I’ll be dragging one such guitar with me on my travels.

Now, I do know that the eventual Certificate/Passport form will require that I provide “pertinent data regarding the musical instrument, including the species used to manufacture the instrument, and a means of identification, such as the manufacturer’s name and or serial number or other means of identification.” My 1943 SJ is, literally, battle-worn, and no longer (if ever it did) bears any identifying number. So, I offer this on my application:

This application is for a Certificate/Passport for my 1943 Gibson SJ guitar. It is a battered instrument first purchased new in 1943 by a soldier who took it to the European battle front. Both soldier and guitar returned, but with scars to show for the experience. The guitar no longer has an identifying number (in Gibson parlance of the era, a Factory Order Number). That number would have been stamped on the neck-block inside the guitar, where the neck attaches to the body. It has now completely faded.

The guitar, though, is easily identifiable by its “battle scars,” as depicted in the photographs on the next page.

Now, because Gibson is, well, Gibson, there’s no online data base matching serial numbers to manufacture dates and my guitar doesn’t even have an identifying number, I’m simply hoping that the FWS accept my assertion, especially after viewing the photos.

The Certificate/Passport application will also require proof that “the CITES specimens used in the manufacture of the musical instrument have not been acquired in contravention of the provisions of the Convention.” I offer this:

OK, stay, uh, tuned for the conclusion of the tale of my attempt to get a pseudo Certificate/Passport in the form of a reconfigured FWS Form 3-200-32. But, don’t get your hopes up. Though the FWS website suggests that the Form will operate as a substitute for the Certificate/Passport, my friendly FWS agent thinks otherwise. “It will only be good for one trip and you’ll need an import and export permit for every country you enter and leave.”

Confused? So are the folks at FWS. After receiving the conflicting phone call, I emailed FWS for greater clarification. This friendly agent advised me to use Form 2-300-30, the forum used by “Circuses and Traveling Animal Exhibitions.” Really. “Substitute the instrument for an animal,” he advised. The form requires listing “date of birth,” “sex,” and whether I got my guitar from the wild or whether it was “born in captivity.” I emailed back, pointing the agent to the FWS website which advises using Form 3-200-32 and specifying in a cover letter that I seek a Certificate/Passport. “That application does not generally provide the passport you would need,” he replied.

So, maybe I won’t get a pseudo Certificate/Passport. Or, maybe I will. My three sources – the website, the phone conversation, and the email exchange – have each provided different advice. I figure that my best bet is to go with the website directive because I can later point to its language when questioned why I might use Form 3-200-32 in my misguided attempt to acquire a Certificate/Passport. I dropped my application, letter, and photos into the mail and now eagerly await the passing of, oh, at least a month and a half.

I’ll start marking off the days on my calendar.

Well, I’m the first one on my block to have a Musical Instrument Certificate! That Form 3-200-32 worked its magic, and in less than two weeks. This is a sight for sore traveling musician eyes: 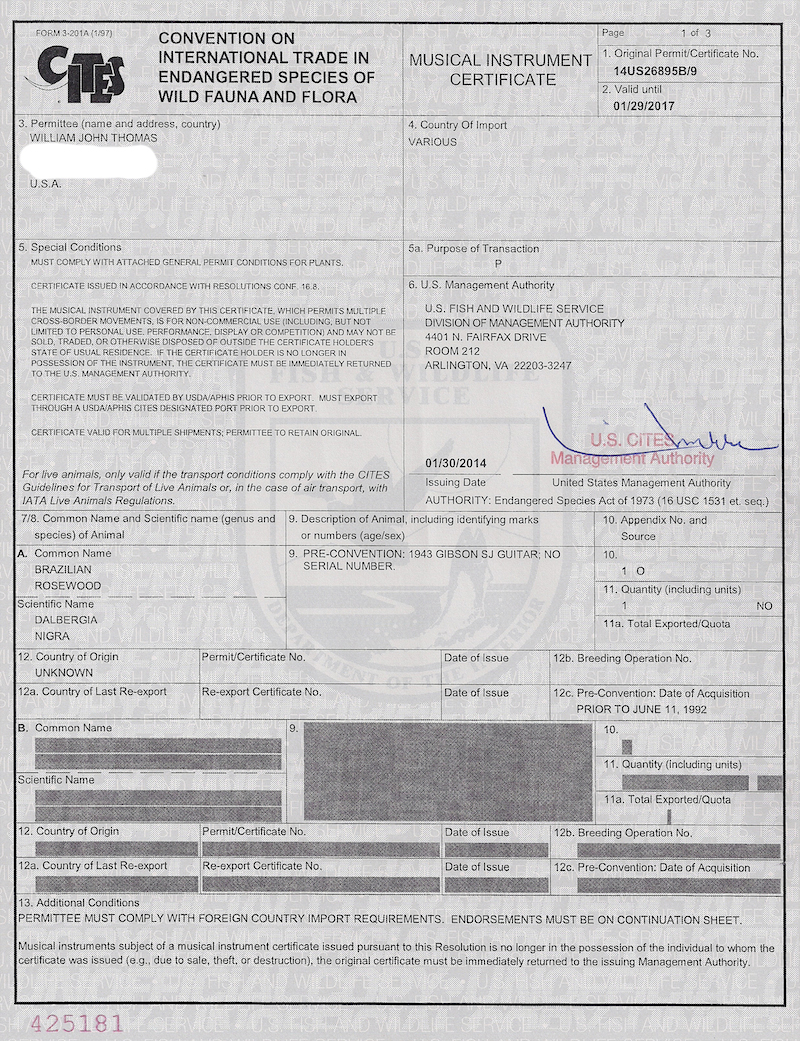 And there it is, the description of my guitar: “1943 Gibson SJ; no serial number.”

OK, I’m going to scurry to my local airport and head for Europe. Well, maybe not my local airport. As FWS points out, if your musical instrument contains a CITES restricted species, you’ve got to exit and enter the US though one of these designated ports: Anchorage, Louisville, Atlanta, Memphis, Baltimore, Miami, Boston, New Orleans, Chicago, New York, Dallas/Ft. Worth, Newark, Honolulu, Portland, Houston, San Francisco, Los Angeles or Seattle. Neither the FWS nor the applicable international treaty provisions, statutes and regulations reveal the consequence of using the wrong airport.

Still, I’ve come this far, so I’m gonna do my best to follow the letter of the law even if, as in the case of the mysterious Musical Instrument Certificate, the letter does not yet exist. And, as long as I’m going to make the effort, I might as well swing through Honolulu to pick up some Koa, before it, too, lands on CITES appendix I.

USFW have now created an application form specific to the Musical Instrument Certificate: Form 3-200-88. It is available here and you should use it in lieu of the form 3-200-32 that I used. 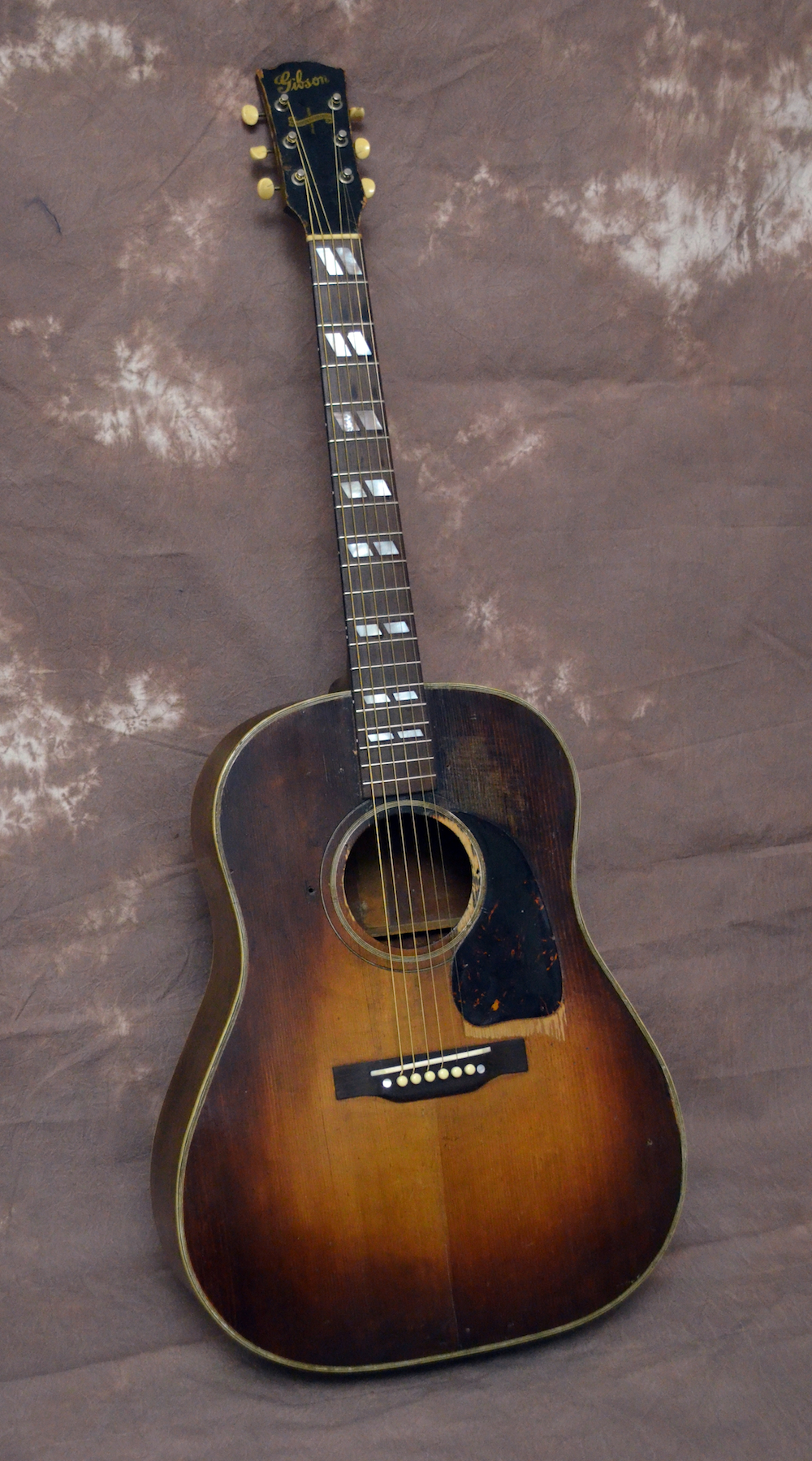 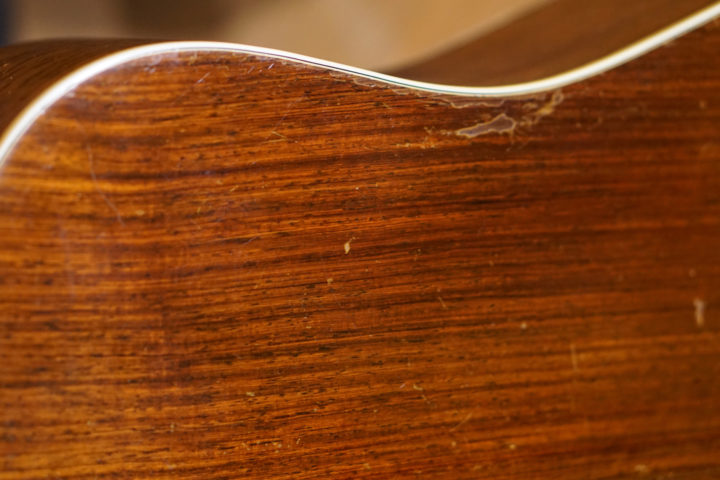 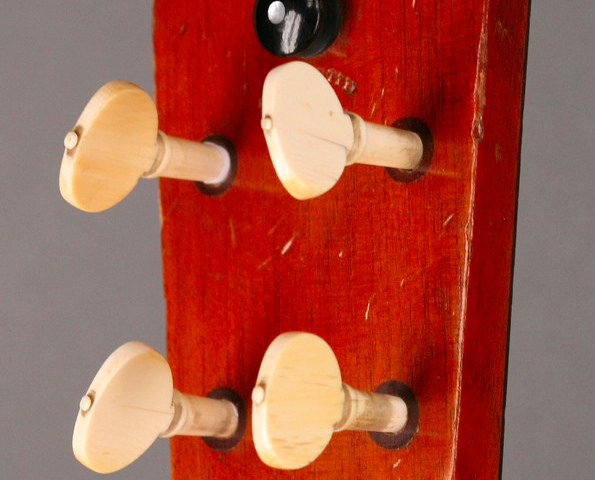 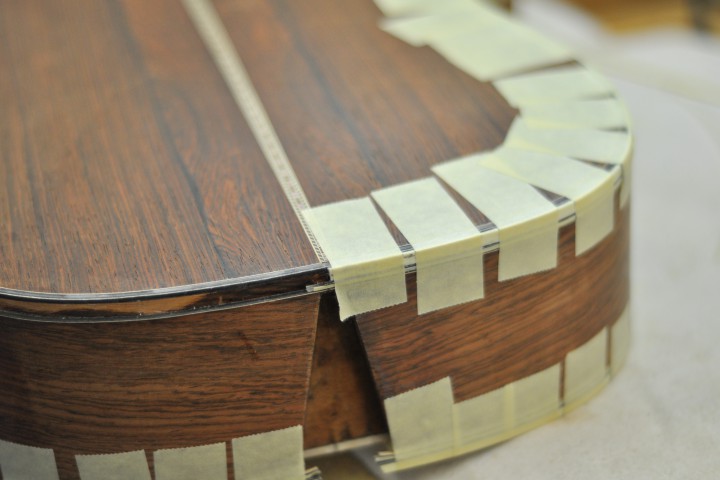