Let’s get this out of the way up front: When we pulled the Grace Design FELiX preamplifier out of its prodigious packaging, I was scared shitless – so many knobs! (Seriously, it has 17 knobs and 22 switches (plus a couple internal jumpers; my entire pedal board has six and nine, respectively.) Immediately I started wondering who I might be able to inflict this on to save myself. This notion was only reinforced by a complete lack of gigs on my schedule and the need to throw as many different setups at the FELiX as we could. Lucky me, there was one convenient friend/guinea pig [Lincoln Barr] with an acoustic set at a finer venue on his schedule, we had a fine fingerstyle guitarist [Luke Brindley] due to visit the office, and another friend/guinea pig [Johnny Sangster] is putting together an acoustic rig for the Bridge School Benefit. Factor in a decent chunk of time poking at this thing on my own and I figured we had it covered. 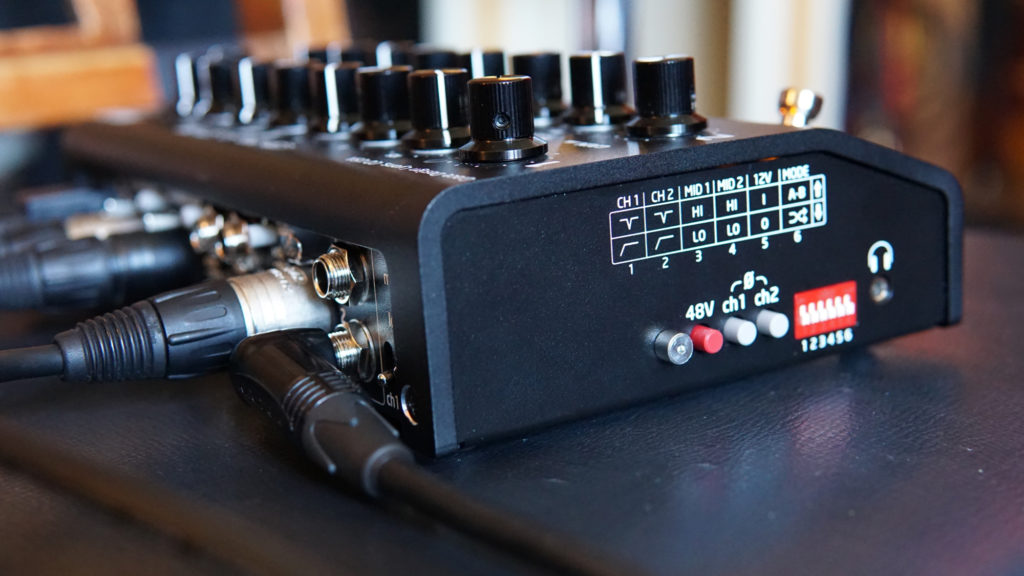 As you can guess, the FELiX is a serious piece of gear (with an equally serious price tag: $995, available in black or silver; Amazon links). Grace Design comes to the guitar preamp from the custom microphone preamp angle, and the bulk of their business is fancy professional recording stuff – the aforementioned microphone preamps, optical compressors, monitoring systems and some miscellaneous accessories and other bits of studio hardware. This is to say, the FELiX is an impressive piece of equipment in just about every sense, going well beyond its staggering array of knobs and switches to its hardcore construction and high fidelity components (I hate to use the word “audiophile” but it probably applies). The list of features is dizzying, to say the least, but to sum up: It is a two channel system that allows you to use the channels independently, simultaneously or mixed, depending on whether you want to use it for multiple instruments or multiple sources on a single instrument, which you can then mix yourself or deliver to a mixing board separately and leave the mixing to someone else. Each channel has its own gain and EQ, including a High Pass or Notch Filter. On the back end, there is a single Boost level control, and Amp/Headphones output level control, and the Mix knob. Once you get past that, the minutiae are somewhat mind-boggling, covering pretty much whatever your setup might require, from input and output signal levels to what’s being output where to who’s getting phantom power and so on, ad infinitum. Luckily, their manual is about as good as they get, and we highly recommend reviewing it thoroughly – perhaps before you decide on purchasing. [Note: Grace Design also offers a simpler, single-channel version, the ALiX.] 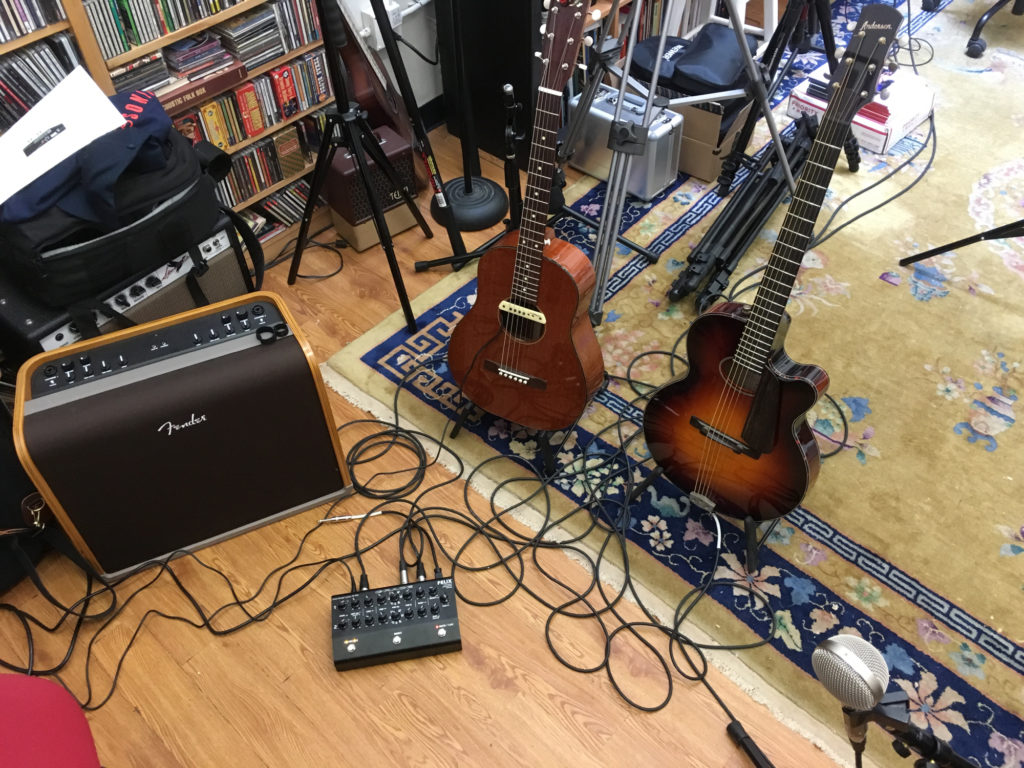 What we ended up throwing at the FELiX amounted to: an archtop with a K&K Pure Mini pickup, a flattop with the Mini and a L.R. Baggs M-1 (separately and mixed), a flattop with a K&K Trinity Pro dual-source system and 6- and 12-string flattops with Fishman Matrix Infinity setups. We also introduced ribbon mics (a Cascade Microphones Fathead BE at the office and a Coles ElectroAcoustics 4038 at Crackle & Pop!) into the picture to mix with everything but the Trinity-equipped guitar. We ran the FELiX into the two channels of a Fender Acoustic Pro amplifier (EQed flat)  at the office for some of our testing, but we recorded it direct.

First, the bad news… Lincoln, our friend with the K&K Trinity system, did not have a good experience. Granted, his situation was not ideal, having just a few days to acquaint himself with the FELiX and being reluctant to make the internal adjustments required. Basically, the FELiX supports dual source pickup systems via a TRS input on channel 2 (tip goes to channel 1, ring to channel 2). The Trinity system uses a mic and a pickup – the mic requires phantom power but the pickup does not, and although you can turn phantom power off and on via a switch on the side of the unit, by default it supplies phantom power to both sources; you can change that by opening the unit and manipulating an internal jumper. Reluctant to open a loaner preamp, our friend found a workaround and eventually dialed in his sound at home, working through the headphone out, but his setup did not translate once he got to his soundcheck and he abandoned the FELiX for the sake of the gig (and the engineer’s ears). We’d like to think the internal tweak would’ve done the trick, but can’t help thinking that, given all the controls already exposed on the unit’s exterior, there ought to be an easier way; ideally those jumpers would be accessible externally – it’s not like they’re shy about including external switches. Grace also uses a TRS connection for the effects loop, rather than a separate in and out, which was another hoop to jump through. Oh, and it would be nice if there were an on/off switch. 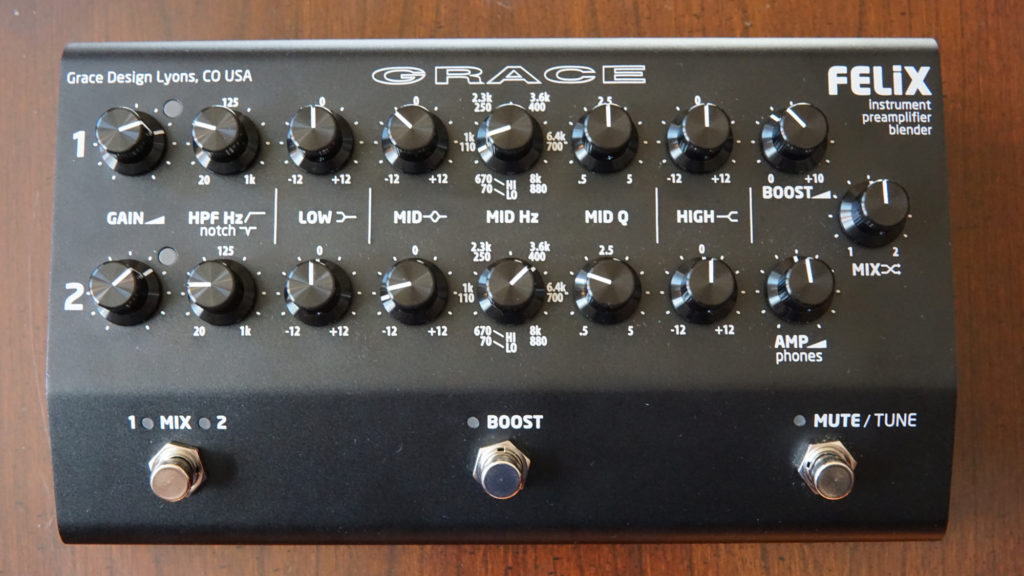 Now, the good news… In our own and Guinea Pig #2 & 3’s hands, with the phantom power issue out of the picture, we were very impressed with the results. Yeah, there’s a lot of knobs, so, yeah, you need to do a lot of tweaking. The EQ is very effective, to the point that it’s kind of hard to stop twiddling – almost every tweak leads to another – but once we got dialed in and became more comfortable using the controls the preamp became considerably less imposing. Of course, in Mix mode, whether blending two pickups or a mic and a pickup, that tweaking is doubled, and then some – we started with the channels separated, dialed in our settings for each independently, then switched to Mix mode and ended up tweaking a little more with the signals combined. The two separate DIs then repeat the whole separate/mixed dichotomy: DI 1 can send mixed or channel 1 and DI 2 can send mixed or channel 2. We tried both methods through the amplifier (each channel to the discreet channels on the amp, and the mixed signal to channel 1), but sent the two channels separately when we were recording to the board, and it sounds about as good as you could hope. That EQ really lets you dial your sound in – or, perhaps more accurately, it gives you the tools to dial out the inevitable problem frequencies, via that High Pass Filter or the robust Mid controls (including a “Mid Q” control that allows you to adjust the width of the midrange frequencies you’re affecting). 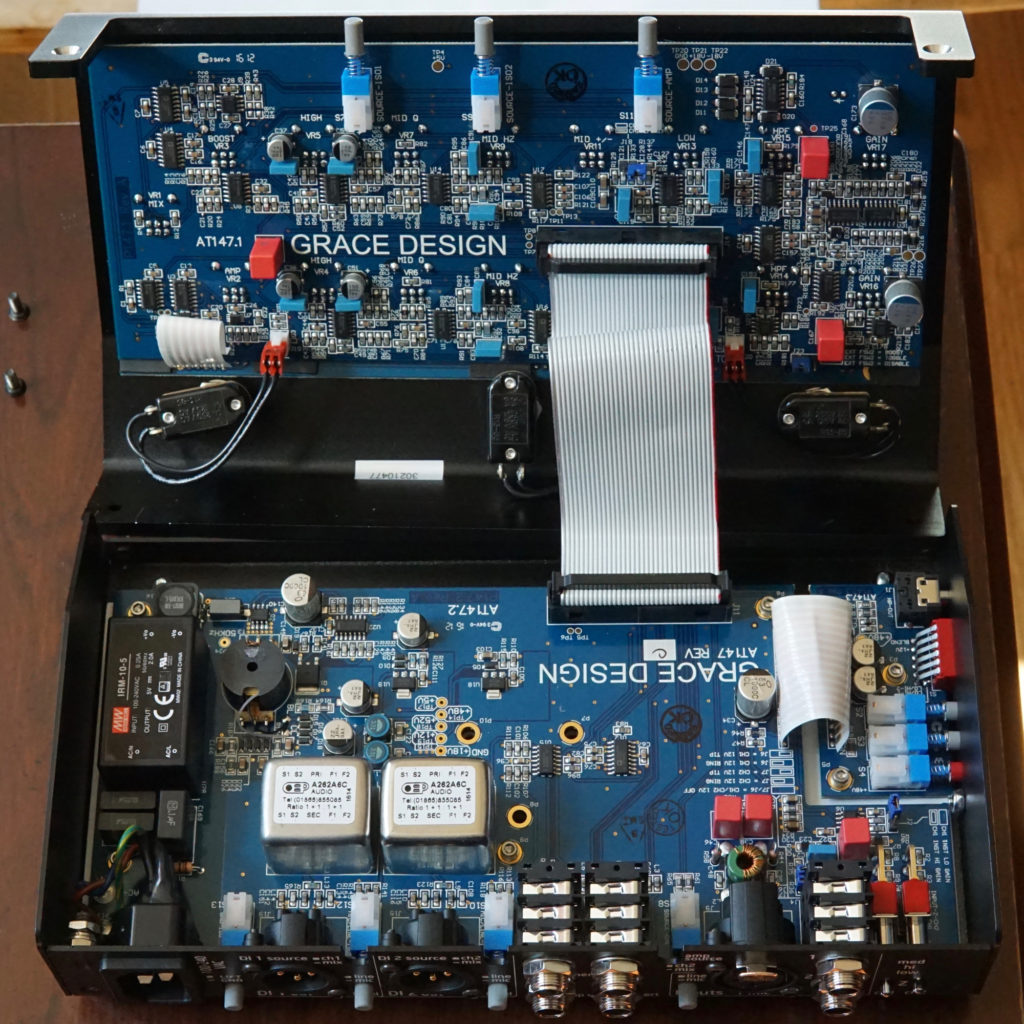 Guinea Pig #3, Mr. Sangster, was duly impressed, though he echoed a few of our wish list items, vis-à-vis easier access to the internal switches and the effects loop, and he pointed out that the positioning of the phantom power switch was kinda dicey, being so close to the phase switches. Beyond that, Johnny said, “What I think is super-cool about it is that it’s like an independent recording interface, as well as a guitar/instrument preamp. If you had a ‘converter’ it would be a great mic preamp for location recording. Grace makes awesome preamps, so that’s cool functionality, kind of exciting about it, especially if you’re on the road and you want to do some recording, you don’t want to have a Pro Tools rig with you, necessarily. You could just have a simpler, good-sounding converter… if they included a DAC – or ADC – that would be fantastic!

“The EQ sounds great to me. At first I thought, ‘Yeah, that’s kinda overkill,’ but really, it’s not. All [these knobs] are just one thing, like a channel strip on a board. I like that you can [both] mix the signal and have it come out separately.” 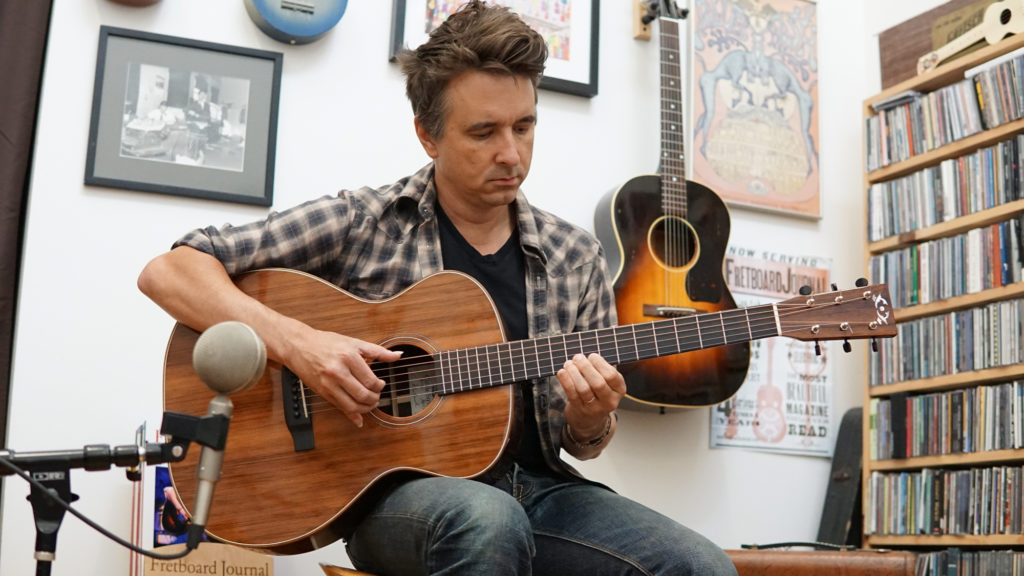 We recorded Luke Brindley and his Circle Strings A1 at the Fretboard Journal office for a Facebook Live session. 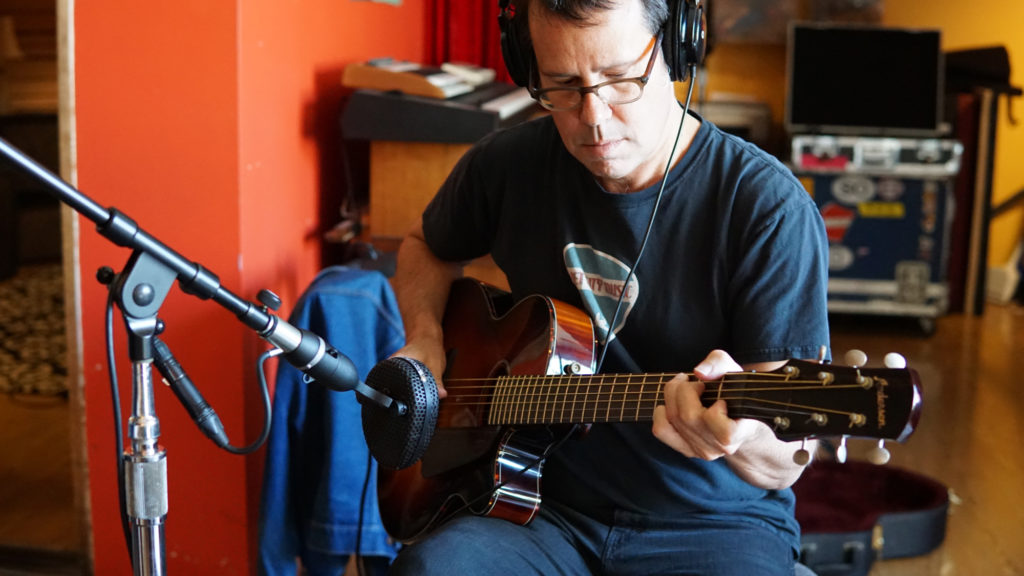 We paid a visit to Johnny Sangster at his studio, Crackle & Pop!, and recorded him playing this Andersen Little Archie.

As you might guess, the value of the FELiX is entirely dependent upon your needs (and your engineer’s needs, of course). If you need granular control over your tone, you won’t be at odds with your engineer and you’re playing through a system that isn’t going to undo your hard work, the FELiX is about as fine-sounding a device as you can find. Even if the FELiX is too much for your live setup, it would be extremely useful for recording purposes if your home studio lacks high quality preamps. If you don’t want or need (or will ultimately not have) that much control, however, there are simpler, less expensive options.