Hoshino Gakki Ten, the parent company of Ibanez was founded in Japan in 1909 as a paper wholesaler. In 1921 Hoshino began importing guitars from Spain and by 1935 they were selling more guitars than their Spanish partners could supply. Sometime around this period they began making tier own instruments which they dubbed with the Spanish name Ibanez. In the early 1960s Hoshino began making solid body electric guitars that were roughly based on the instruments of Fender and Gibson but by the early 1970s these had morphed into guitars that were almost exact copies of famous Gibson models like the Les Paul, the Flying V, the Firebird and the SG. Gibson was understandably annoyed and by 1975 Ibanez began offering their own designs, including the double cutaway, carved top solid body Artist series. I remember when the Artist series debuted and how the high quality of these guitars quickly convinced players that Japanese guitars were more than just cheap copies of American guitars. Ibanez Artists looked good, played well and sounded very nice.

Which brings us to today’s Catch. I like to think of the late 1970s as The Brass Age. I don’t mean metaphorically but because back then there was a craze for replacing as many parts on your guitar as you could with parts made of brass. Acoustic players would switch out the nut and bridge pins and sometimes even the saddle while electric players would swap out the nuts and bridge assemblies. The feeling was the heavier mass of the brass parts would help increase the sustain, which was true but the extra weight also dampened the volume and dynamic response. The brass craze reached it’s peak in 1979 with this Ibanez Artist 2622, which was a solid brass guitar made to display at the NAMM in Chicago that year. I’m not sure if this guitar was made to subtly mock the brass craze or if it was built to show off the metal working skills of the Ibanez craftsmen, but I do think it is both wonderful and silly. According to the seller, the guitar weighs 76 pounds, which makes it a literal back breaker. Scroll to the bottom of the page to see a video of the guitar being played. This is a one-off and it’s on eBay with a Buy it Now price $24,999.95 which seems like a lot to me but then again, try and find another one. 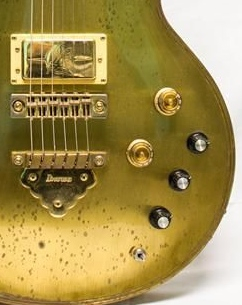 Catch of the Day: Circa 1935 Harmony Cremona VII