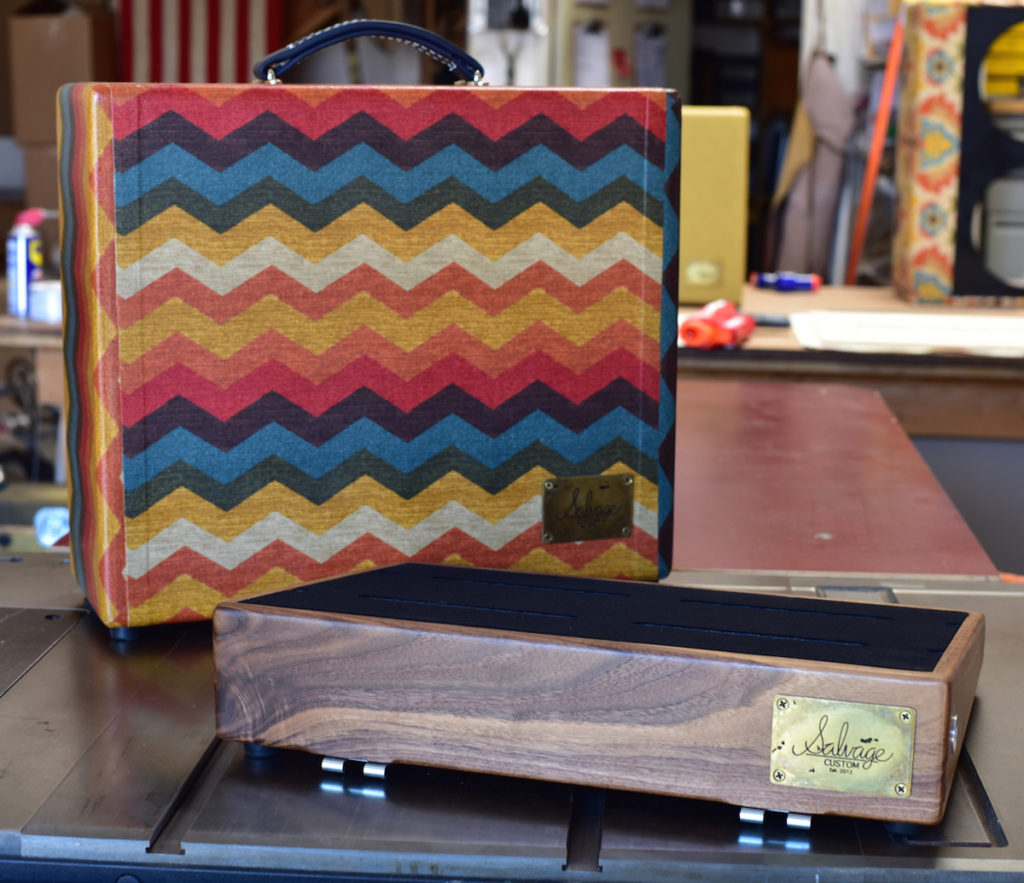 Not too long ago we featured Tim Marcus of Milkman Sound in a Bench Press. In the course of our conversation we touched upon a couple of amplifiers he’d made in collaboration with Salvage Custom, who had provided provided the custom-wrapped cabinets for the amps. Salvage Custom is the brainchild of Daniel Tyack, building spiffy pedal boards and cabinets with a small crew out of a shop in San Diego, California. He’s been on our radar for a while and we figured it was about time to reach out to Daniel and find out what’s up…

Fretboard Journal: So, the obvious question, why pedal boards? How did you get started doing this?

Daniel Tyack: The first board I built was in 1996. I was in high school and, even then, I was frustrated by the lack of good options out there. I believe that particular board was a piece of white formica shelving from Home Depot. I put some handles and feet on it then proceeded to measure out the screw locations of each pedal and drill holes. I found all the right screw sizes and screwed every pedal down to the board through the back. It lasted for a heck of a long time. Was it flexible? Nope. But, hey, not bad for a high schooler! I have had a design in my head, similar to our current fold out design, since the late ‘90s. I never pulled it off back then because the cost to build was prohibitive for a high school kid. As it turns out years later, it’s a pretty solid design and people seem to like it!

Despite the ongoing general interest in pedals and pedalboards I didn’t start a company making them until much later in life. Shoot, I never even planned on having a company that built guitar equipment. Salvage’s start was honestly a fluke. I had a successful freelance business offering marketing services to small companies around San Diego. I was on retainer with a big customer and waiting for a large job to come through. Basically, I was getting paid to do nothing and was bored out of my mind for two months. I built a couple guitars and then thought it would be cool to design a really nice hardwood pedalboard in an old crusty suitcase. You know, create a little design contrast and end up with some functional art. I built it, posted pics online and the rest is pretty much history. 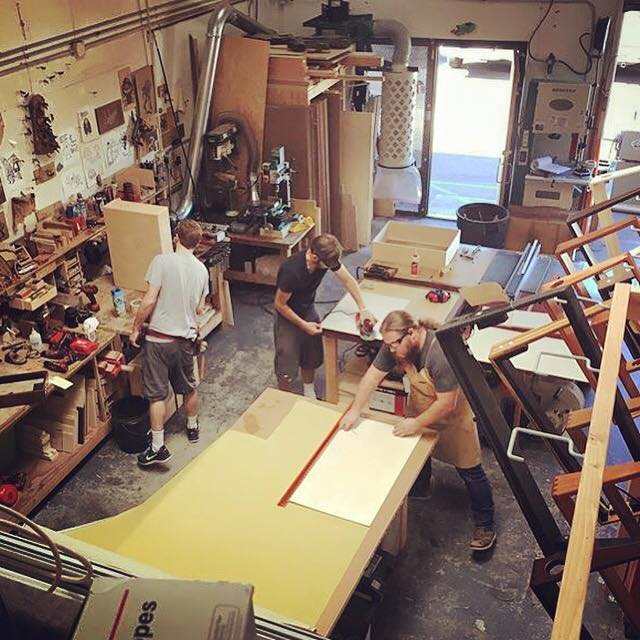 FJ: What can you tell us about the shop?

DT: The shop… It’s 860 square feet with some loft office space for a total of 1000 square feet. Right now I have seven employees and it’s pretty crazy in here. I started with nothing but my personal tools and built the equipment and infrastructure from the ground up. It’s still a stupid small operation that doesn’t make a lot of money. Most months it gets a little better and some months we take a hit. It’s just business and we make it work. Sometimes I take extra guitar gigs to pay my family bills. Like I said, it’s just business.

When you come in the shop you’ll likely be greeted by sawdust, music, weird art and a bunch of musicians building a dream. We’re open to visitors, just bring beer and/or donuts!

FJ: What can you tell us about the materials you use? How do you source them? We noticed you got some of your wood from Bob Taylor…

DT: We source our materials from all over. San Diego has a bunch of great hardwood suppliers and we’re lucky to have three within 15 minutes of the shop.

As for the Bob Taylor connection, here’s the back story: Bob befriended us about three years back. His nephew bought a board from me and I ended up meeting Bob. Long story short, he’s now a business mentor and just the best guy ever. His personal man cave is down the street from us and Taylor Guitars is about two minutes away. I think the current state of our shop reminds Bob of the old days in Lemon Grove. As a young man Bob hustled for years in a tiny shop building the dream. He sees the magic of Salvage and likes that we hustle hard. Taylor Guitars has nearly zero material waste. They even take every unusable scrap and shred it. A landscaping company picks it up so nothing gets thrown out. When it comes to the really good stuff, they put it aside in the warehouse. There’s wood on those pallets that I would never be able to find or afford (and nobody would buy our products if it was fair market value!). We purchase most of our materials outright and I never like to ask Bob for much, but he has been extremely gracious with us. His exact words were, “I’m going to get you some wood. You make the nicest thing you can out of it and sell it for as much money as possible.” I didn’t argue.

As an aside, Bob appreciates our work and has occasionally had me come over to work on personal projects. A few months ago I helped him finish up the camper kit in the back of his excursion-ready Land Cruiser. He now has a fine set of Bourbon Burst utility boxes trimmed out with leather in the back of his rig. I’m very proud of that. 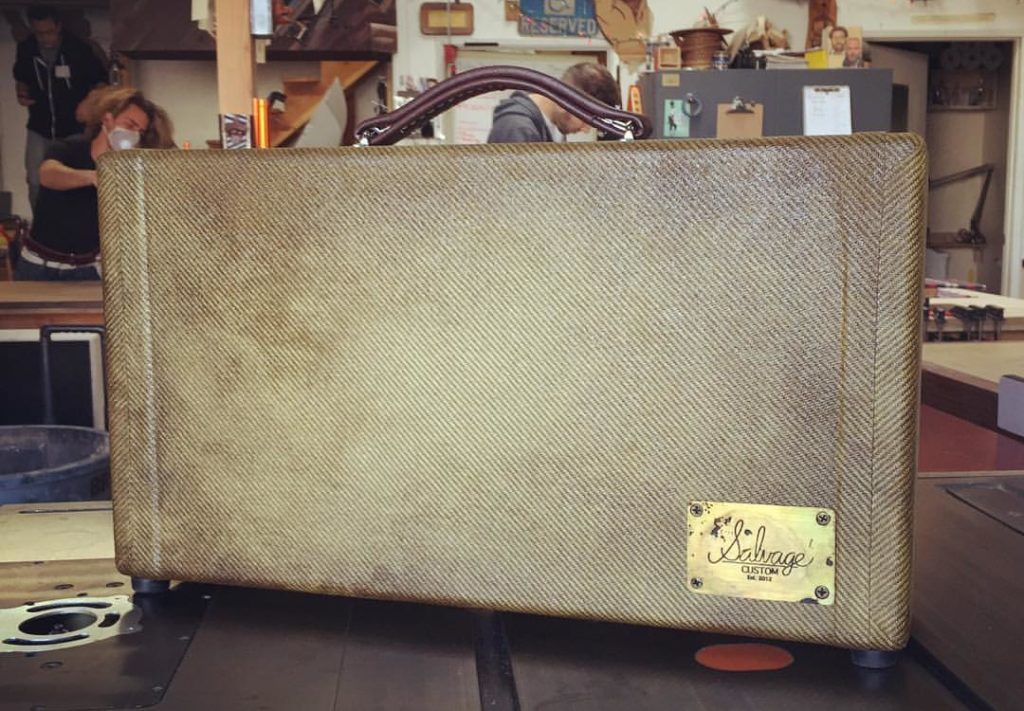 FJ: We talked with Tim Marcus of Milkman Amplifiers a while back. He told us about some amps you have collaborated on for some pretty serious artists. How’d that come about?

DT: First off, Tim Marcus is a friggin’ champion. I love that dude. We’ve been collaborating on different fun amp wraps for a couple years now and some cool stories have come of it. There’s the Jeff Tweedy amp story which is laughably unimpressive: Jeff was in the market for a Milkman Creamer and asked Tim what he had. Tim showed him the Bourbon Burst Creamer and he was sold. It was cool to hear that it was love at first sight, but really, that’s pretty much it. 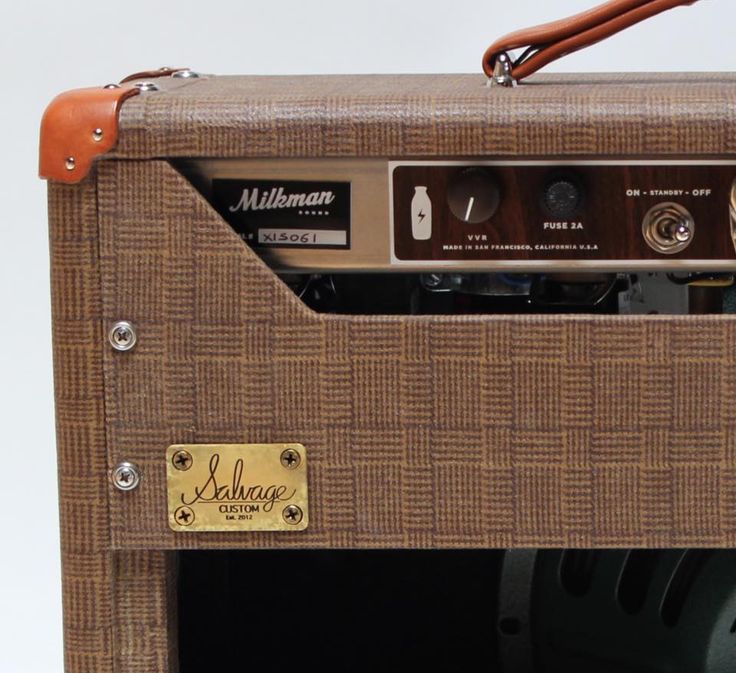 The most impressive one however is the one that’s vaguely on the down-low. There was a legendary guitarist celebrating his 70th birthday recently. John Mayer wanted to get him a suitable gift and decided on a Milkman Creamer. Since it was for a very special occasion he wanted us to wrap it in something amazing. I had just done our first “English Gentleman” finish and he decided on that. The inspiration for the English Gentleman was basically a sport coat with leather patches on the elbows. It’s wrapped in a brown plaid with tan leather corners all around. Needless to say, it’s pretty damn classy and it was the perfect gift for the afore(not)mentioned legendary guitarist whose name may or may not be Eric Clapton. When I was wrapping that amp all the guys in the shop came and wrote notes to Eric on the cabinet. They ranged anywhere from thanking him for his influence to, and I quote, “You were great in Forrest Gump.” It was a pretty fun moment for the guys and we are more than honored to have our work in the presence of artists like Tweedy, Mayer and Clapton.

FJ: You’ve done a bunch of other special orders like that – do you have any favorites? Anything you haven’t done that you’d like to do?

DT: I have a policy to never build anything that I don’t like. With said policy in place, it’s pretty easy for me to like everything we do! I occasionally have favorites but those favorites tend to change on a bi-monthly basis I have some ideas for different styles, but the reality is I need to work more on pushing out other product lines that nobody even knows about! We’ve been so slammed for the last few years building boards that I’ve never had a chance to really develop our speaker cab and custom case lines. 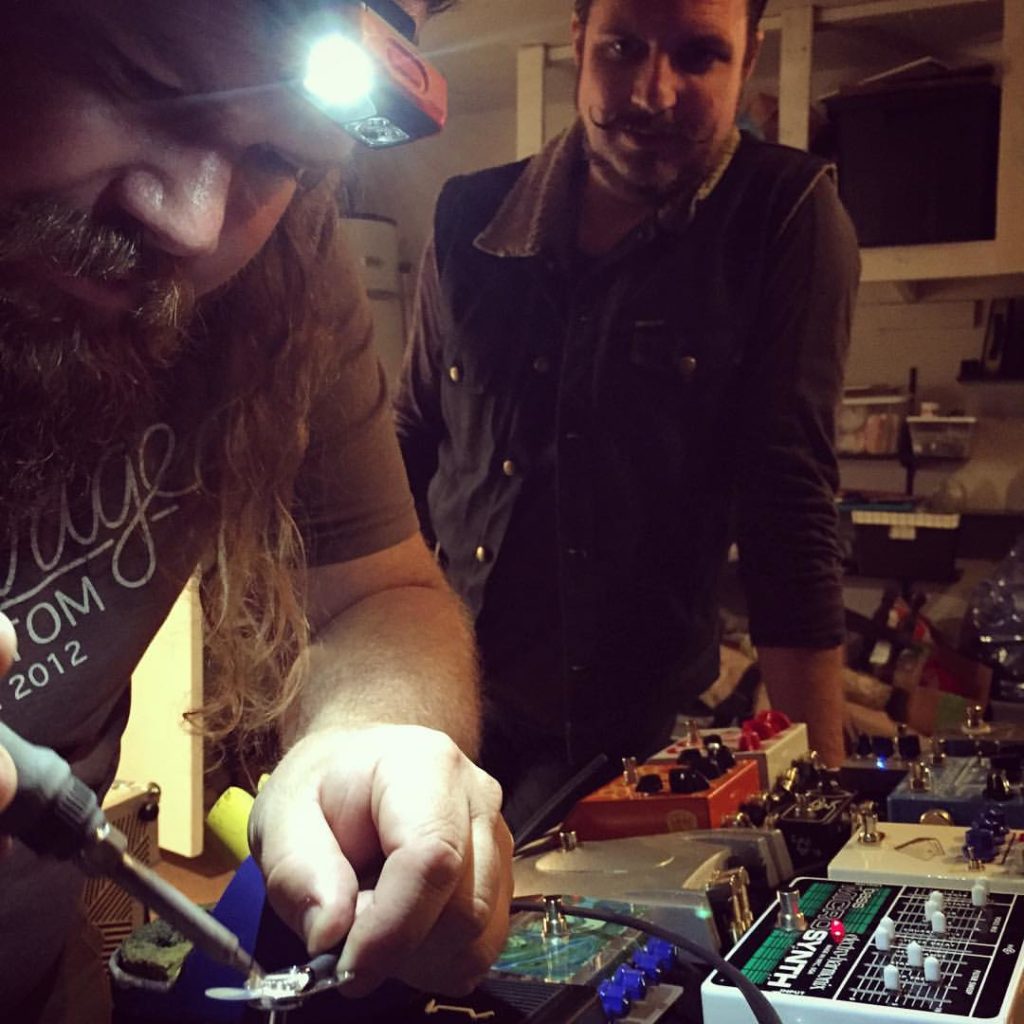 Daniel pulls out the gun for a tweak or two to Rival Sons guitarist Scott Holiday’s Salvage Custom board. (Photo from Salvage’s Instagram.)

FJ: From a user’s perspective, what’s the biggest mistake folks make with their pedalboards?

DT: The biggest mistake people make when building a board is not being themselves! The internet is a blessing and a curse when it comes to finding info. It’s great because there’s a ton of great information about gear out there. The downfall is, every board in any particular niche of the internet ends up looking the same. I’m a big fan of doing things differently and pushing boundaries. Get out there a do your own thing!

As for a less ranty answer, I would say people tend to purchase boards that are too large. The reality is, no matter how light a board is (we’ve done a ton to keep ours as light as possible) you’re still going to load it with a bunch of metal boxes, cables and a power supply or two. That sucker is going to be heavy. People feel like they want “room to grow” when they are spending as much as they are on a Salvage rig. That’s the wrong approach. It’s always better to decide what you want to do and build around that. Sometimes all you need is a few pedals. Sometimes you need all of them. Most of the time you just need a few core pedals with a variety of weirdos to have fun with and be inspired by! I personally like smaller rigs (no bigger than 24″x13″). They are easy to manage, hold plenty of pedals and you can just swap stuff out as needed. The boards are designed to make that easy. 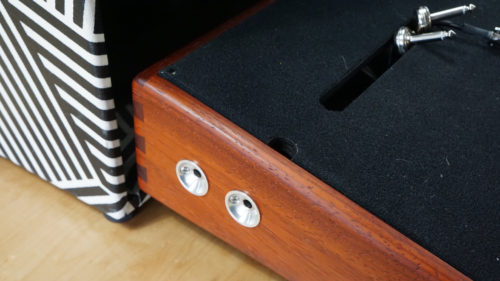 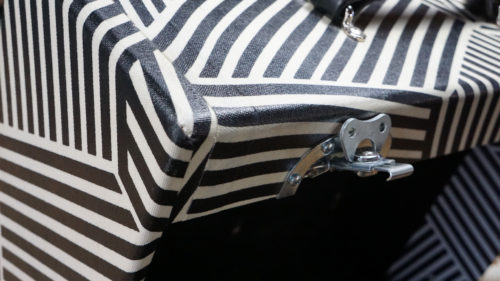 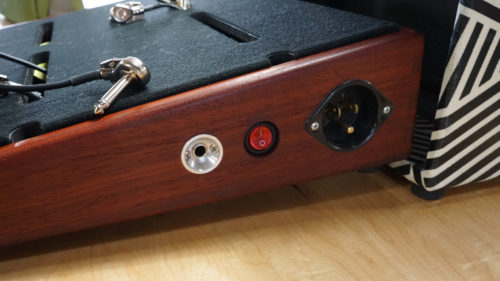 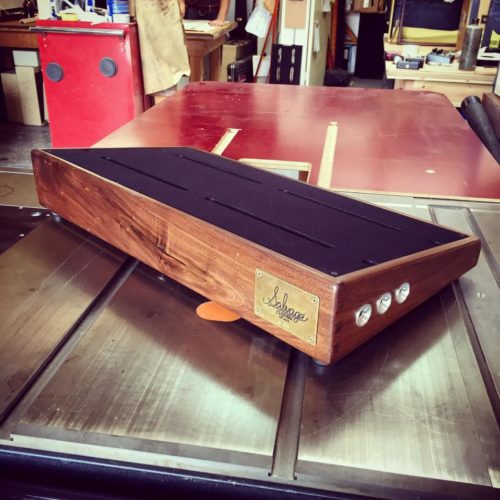