Luthier Nic Delisle of Island Instruments has been on our radar for a while now (you might recall our visit with him for our Bench Press column). Thanks to social media, we get to keep an eye on the guitars coming out of his shop–they’re all pretty spiffy, but he recently finished a version of his Traveller model featuring a mosaic top crafted from pieces of The Tree that we felt warranted a closer look. The Traveller is a small (23.5″ scale, 9″ lower bout), headless guitar that combines portability with playability. Back when we first spoke to Nic he was working on Traveller #2; this one is lucky #13, and it’s pretty special… 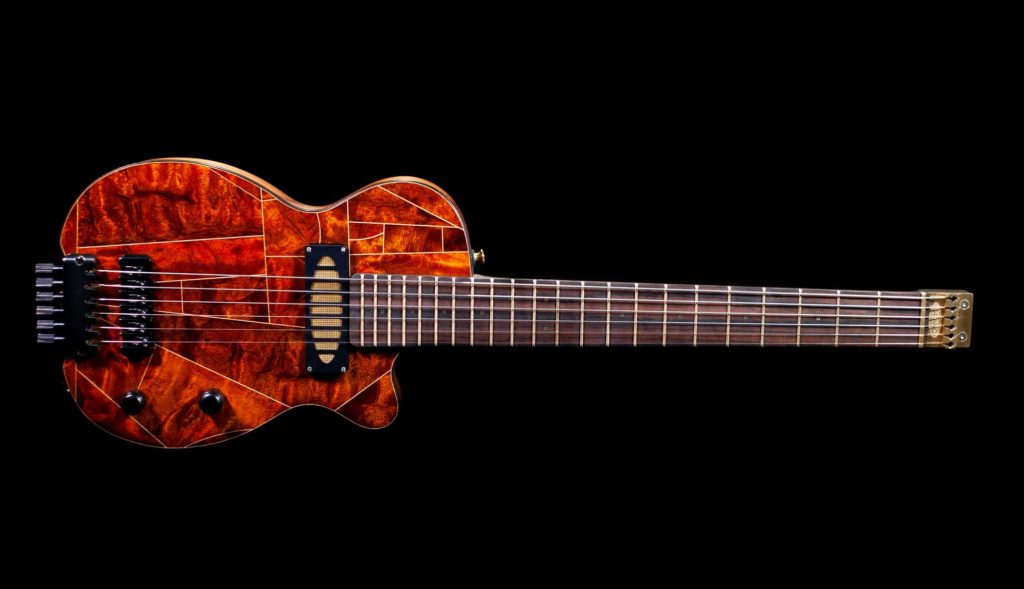 Fretboard Journal: Which came first, the wood or the idea?

Nic Delisle: Well, that’s a real “chicken or the egg” question. The idea definitely came first, but the wood is what actually got the ball rolling. Otherwise, who knows when I would’ve got around to it?

Let me elaborate. My gateway into instrument-making was via the electric bass world, and more specifically, Carl Thompson and the “Rainbow Bass” he built for Les Claypool. So the idea of a “scrap bin” guitar has been in my head pretty much since Day One (though I never envisioned it being my most expensive guitar to date). A few times over the years I had planned to get started on one, but I guess nothing ever really compelled me… until  “The Tree” pieces came into my life. 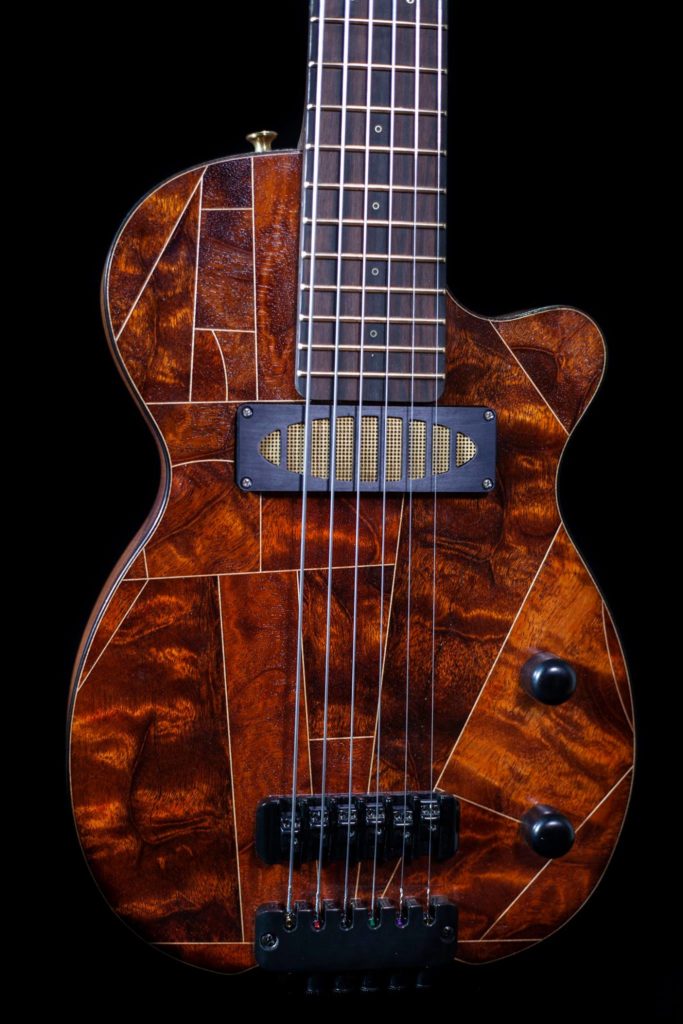 FJ: How did you find the wood?

ND: Since November of last year, our shop has been super lucky to have Calgary-based luthier extraordinaire Joel Michaud working with us. He and his partner decided to spend a year in Montreal while she had the option of working remotely. Having him around has been an incredibly enriching experience and it’ll be sad to see them leave in a few months…but I digress. Joel builds quite a few guitars with The Tree. He’s worked on seven since being in the shop, including one made entirely – back, sides and top from The Tree…  I think he has more on order! He offered up a box–a very small box–of scraps and that’s when I had the lightbulb moment.

FJ: Tell us about the layout of the mosaic. How was it done and how much of it was determined by the size/shape pieces versus the design you envisioned?

ND: Given the visual quality of the wood, I knew it would lend itself well to that whole “stained/broken glass” aesthetic, and that’s what I wanted to do. I dunno if Jason Kostal was the first to do it (on his rosettes), but it’s certainly his signature and he popularized it. It’s the one element I really love about his guitars, and it knocked me out the first time I saw one.

All that being said…it was pretty much entirely designed by the pieces. The scraps were all quite small (the two biggest pieces you see in the top were pretty much the biggest scraps in the box) and they were almost all cut to weird, curvy shapes. The layout was improvised, pretty much just happened organically. I have an acrylic template of the Traveller body so I would glue up some pieces and place the template over it to see how it looked. I spent two days cutting and gluing little pieces together until I had a plate that looked cool and was (just barely) big enough for the top.

I think I recently saw some acoustic sets of the Tree being sold for $6,000, and you don’t get a lot of excess material! At that price, I wasn’t going to throw any out and with the rear “head” veneer, heel cap and control cavity cover I used literally every piece of The Tree from that box. 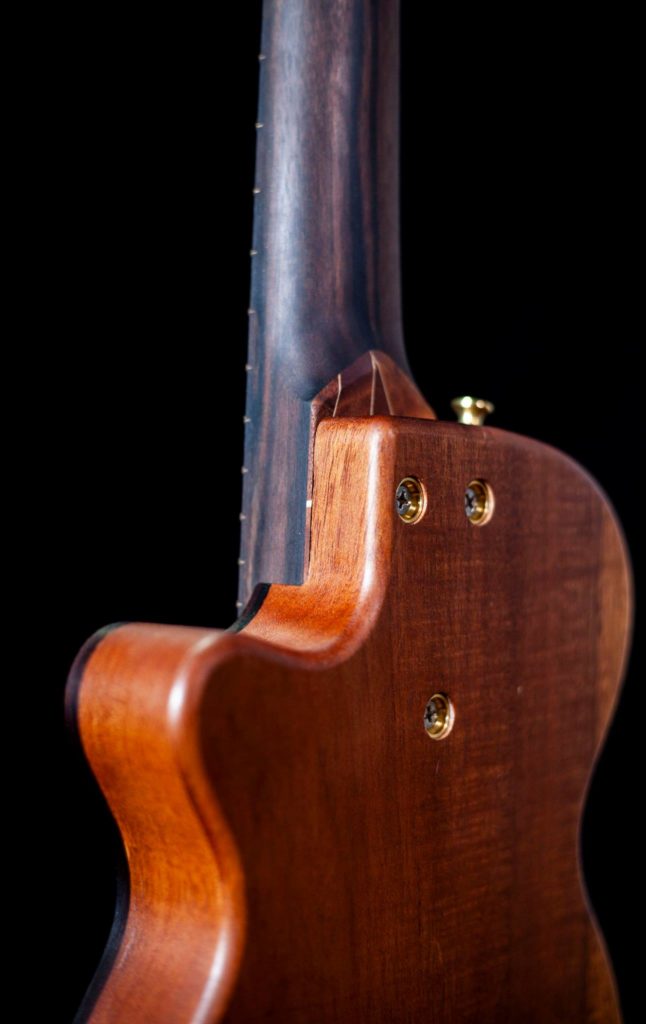 FJ: The one-piece Macassar ebony neck is surely a special piece of wood, so it’s pretty clear how you chose to match that component with this guitar. How did you decide on the Cedro Espino for the body?

ND: That Macassar was one of the first boards of wood I ever bought, years ago, around 2009 while I was dropping out of guitar-making school. I’ve been sitting on it all these years and was never sure what to do with it, I always thought it would be cool/funny to make a neck from it. A bunch of people recently have been ordering fat one-piece necks (no truss rods, fret slots cut into the neck) from me, especially on Travellers. This just seemed like an appropriate project for the piece. Because of the headless design, I didn’t really need to worry about neck dive being an issue and, to make sure, I used ABM hardware on this build which is made of brass (as opposed to Hipshot, which are aluminum) since it’s heavier.

I went back and forth on a bunch of different woods for the body, including reclaimed spruce from a rail tie and a nice board of butternut. Ultimately, I went with the sinker Cedro. I try not to mix too many things, visually, and I like repeating elements as much as possible. The Cedro looks mahogany-esque so it just seemed like the right choice, in the absence of mahogany. The binding is Macassar from the same board as the neck. Bending it was not fun! Thanks to Mike Kennedy for helping out… another perk of the shared shop! All the hardware is black, with the perforated brass foil accent on the pickup, which matches the inlays, solid brass for side dots and brass rings on the fretboard face. The pickup is my signature Hersheybucker, wound exclusively for me by Mojo in UK. It’s low output, very transparent and has a ton of clarity. It’s also microphonic. I strung up the guitar with flats cause I envisioned it as being a sort of faux archtop jazz guitar. The customer approves!

Photos by Mat Barbeau, except where noted. 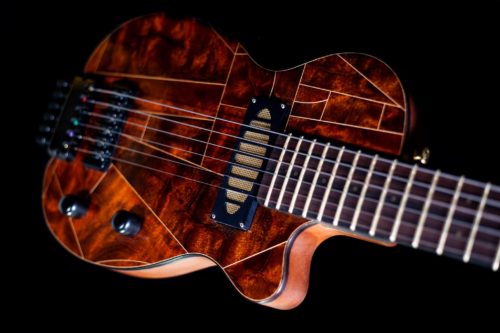 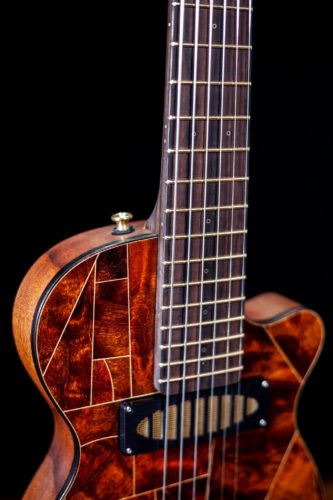 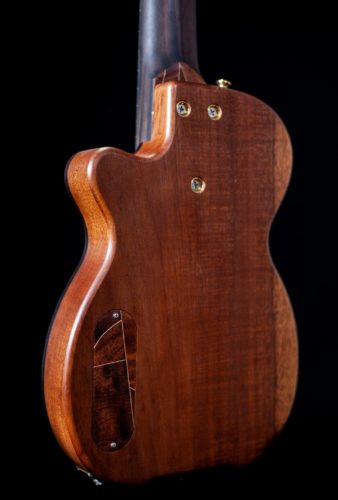 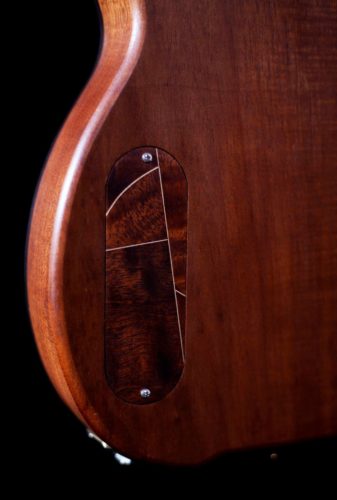 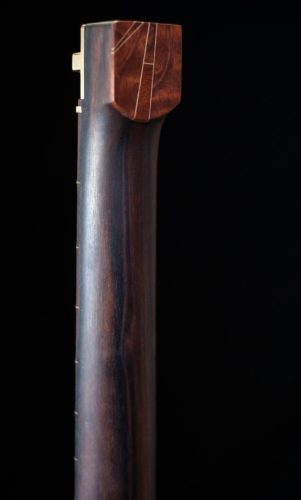 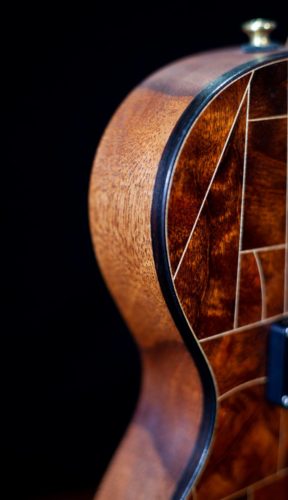 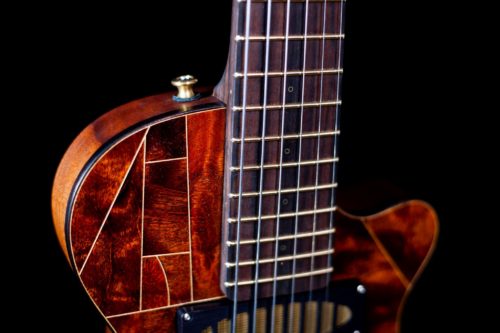 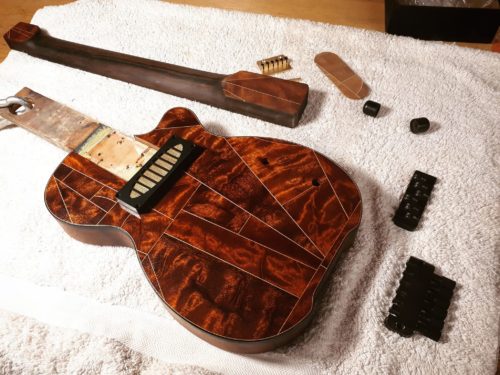 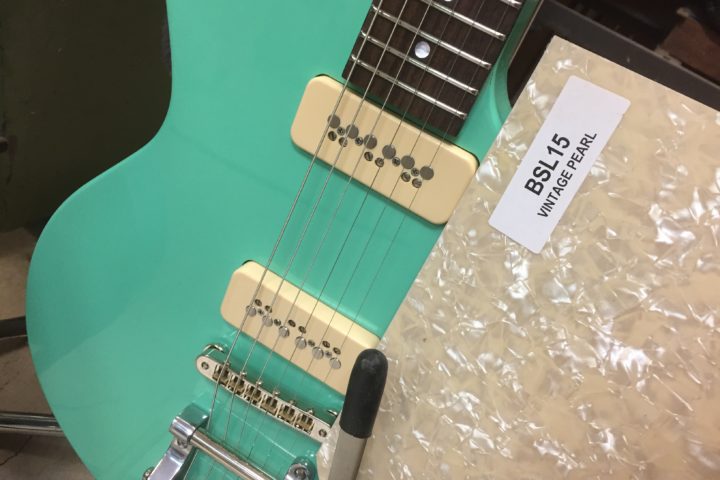 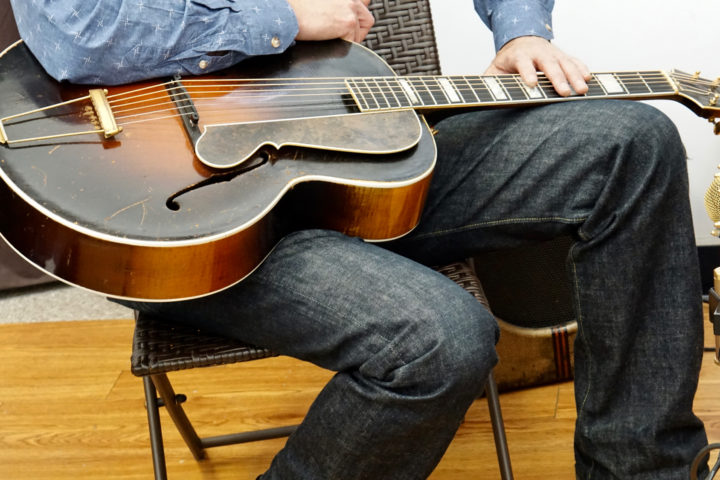 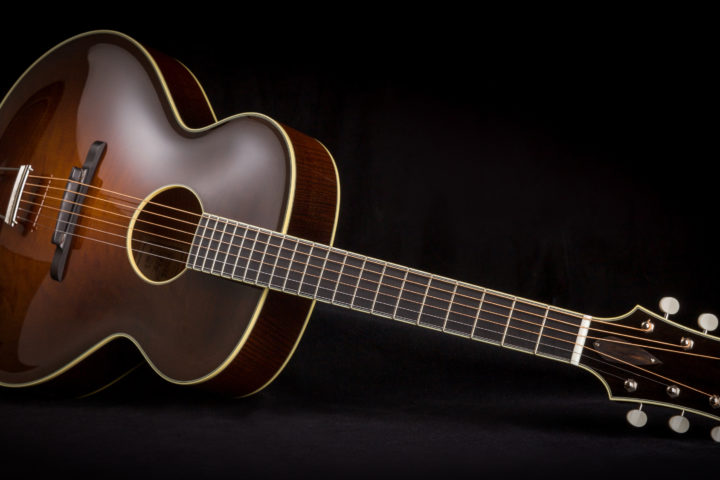 A Closer Look: The Bill Collings Tribute AT 16