Editor’s Note: This originally appeared in Issue 46, as a sidebar to the John Smith feature story, “Mixed Signals: John Smith and the complexities of identity.”

John Smith’s rigs match his gigs. It’s not a stretch to say he’s serving two masters, balancing a lot of dates on acoustic guitar with others on electric, but he definitely seeks to serve them both well. He is no less obsessive about good tone than anyone, and that applies equally to his guitars and his pedalboards, plural, for acoustic and electric.

Roger Bucknall of Fylde Guitars is, for all intents and purposes, his luthier.

“John is still the most focused and ‘professional’ professional I know,” Roger says. “He actually makes long-term plans—who’d have thought? [He first] came to see me almost 14 years ago, when he started to take his career seriously and thought we could help each other. His friends and musical influences were the same as mine, and it was an almost instant connect. Once I saw him play and sing, it was clear to me that he had something new to offer. His guitar playing is a breath of fresh air…the content is massive, full of gentle little riffs, as if he has learnt everything there is and is letting it out one night at a time.

“John takes a while to form an attachment with a new guitar; he plays and listens for a long, long time, months probably, before he really connects. That’s fine by me, because I’ve always felt that you don’t hear a new guitar until you get it home and really listen. In a shop or exhibition, all you hear is the volume and the bass. The rest of it, the actual tone, doesn’t come through until you have it all to yourself. He travels a lot, so I tweak his guitars until they have fully settled down.” 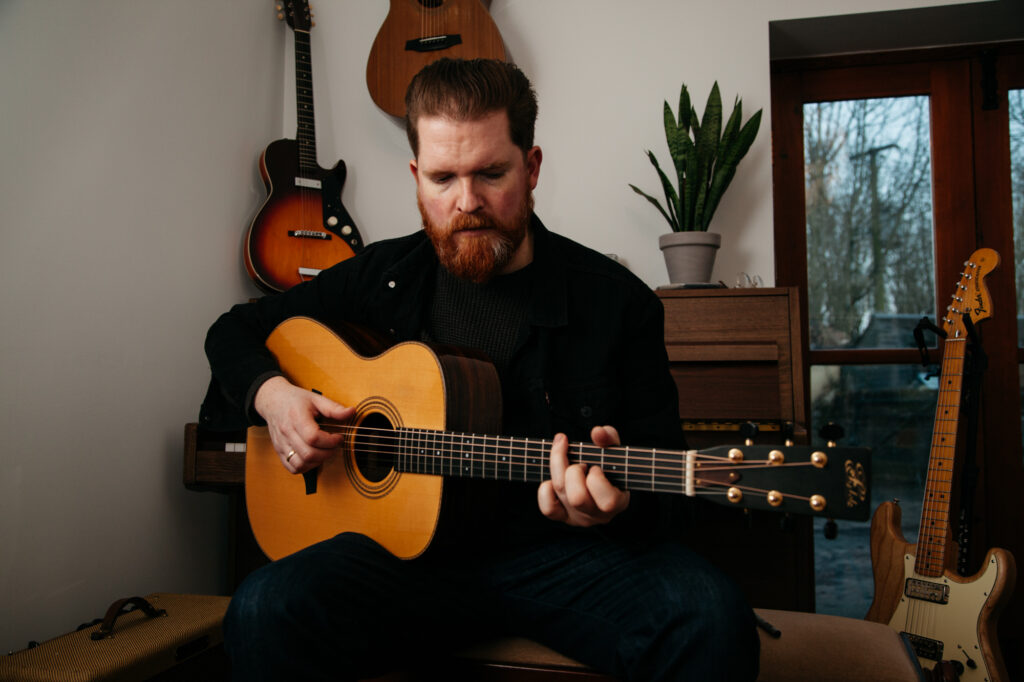 “His first guitar was a custom Falstaff, but his second is a perfectly standard model, a Falstaff that he found on my stand at the Ullapool Guitar Festival. He sat on the floor in a corridor where he could hear it bouncing back to him. He was there for hours and still spent a while thinking about it. He only made up his mind some days later, when I told him I still had it. There is a lesson in there, because I’ve been tweaking that design for about 40 years. There isn’t much that can be added, even by someone like John. That’s been his main guitar for years, but about 18 months ago we discussed a smaller model with lots of variations. It’s an Alexander body, but everything else is different. It’s some very old wood with a big personal history and connection. It worked well enough, but it wasn’t long before John asked me to modify it: we took most of the lacquer off and we’ve changed the pickup system I think three times. That’s become his main guitar now.”

“John likes a ‘dark’ sound; he relies on an internal mic and we’ve tried, I think, about six different systems across all his guitars. It’s a lot of work, and I couldn’t do it if I wasn’t a fan, and if he wasn’t a friend.”

“He has also had a number of unusual instruments, an excuse for me to have fun and have somebody else pay as much as anything. I built him a fan-fret baritone eight-string resonator, which Lisa Hannigan christened ‘the Millenium Falcon,’ and bit by bit we modified it by fitting different necks until it was just a six-string resonator, then I helped him sell it to fund the Alexander! Never a dull moment with John, a constant learning curve for both of us. I’ve even built him a banjo. Now, that tells you just how much I value him!”

John shared some more details about what’s going on with that Alexander, much changed from when he last visited The Fretboard Journal.

“My main squeeze is that little Fylde Alexander, which I’m currently rocking with two pickups: a Mimesis Kudos—holy shit, the best soundhole pickup ever—handmade by Mike Vanden, and an LR Baggs Lyric. It’s a tweak on the LR Baggs Dual Source concept, which I’ve been using for a few years, except now I have the benefit of two microphones inside the guitar and a magnetic source. So I can keep the Mimesis in the monitors, through my FX, and the Lyric in the house, with a little reverb. I’ve been achieving some wild acoustic depth with this combination.” 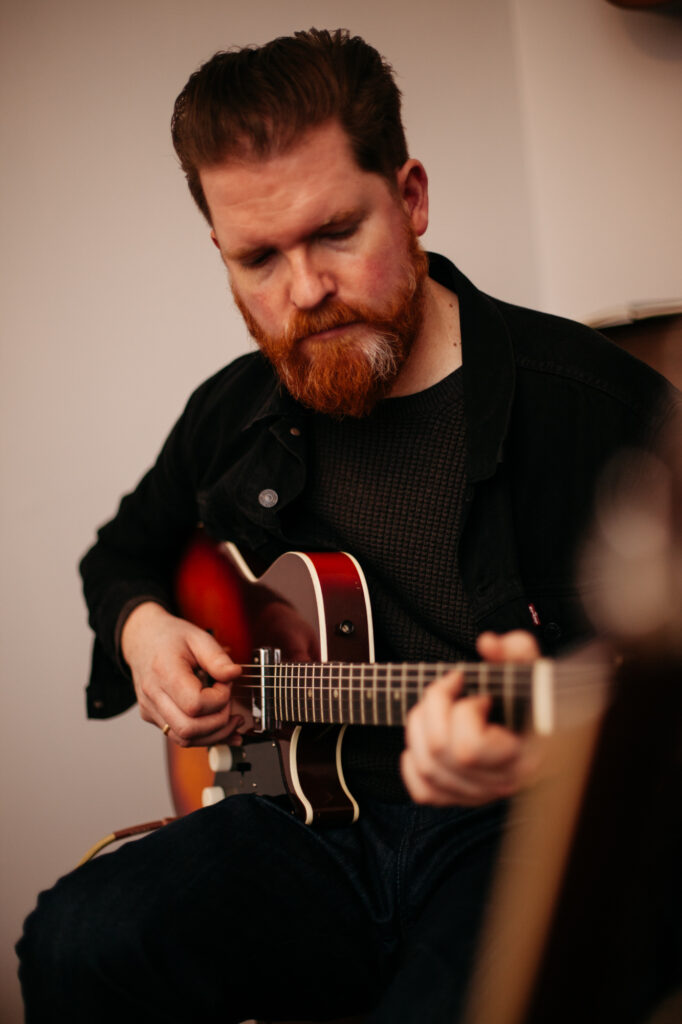 His electric guitars have included a cobbled-together Coodercaster, since simplified, a Gibson ES-335 and the ubiquitous Tele. More recently he “just got hold of a Heritage H-530” and he’s “been playing a ’62 Kay Stratotone [on permanent loan from Mr. Henry], which will appear on an upcoming live release.”

As you might imagine, that tweaking tendency comes to full flower in his pedalboards. It’s worth a visit to YouTube to find John’s appearance on That Pedal Show. He shared a recent rundown, which in all likelihood has been subject to modifications since.

“I spent a long time working with Pedaltrain boards. The modular approach suited me, going in and out of sessions, but when I went back to touring my own songs full time, I needed to stop pulling boards apart and just have two rigs that worked. I wanted inputs and outputs onboard and something I could fly with, that would survive luggage handlers, so I fell down the pedalboard rabbit hole and discovered Schmidt Array pedalboards. They’re a small but growing builder in Germany who toe a line between pro audio and bespoke cabinetry. It’s really beautiful gear.

“I ordered two boards. I have one that stays intact for my UK shows, a heavy-duty board with electric and acoustic inputs. The second is a smaller board for flight gigs and sessions, which has just one signal path for acoustic guitar. Both boards revolve around a Raven Labs PMB, which is kind of the original and best two-channel acoustic preamp. I blend two pickups to a mono signal, with EQ on each channel…if there are any amp builders reading this, I’m looking to commission something smaller than a 2 kg brick! I also have a Boss OC-3 on each board, sending low end to a separate output. Really handy for solo gigs.” 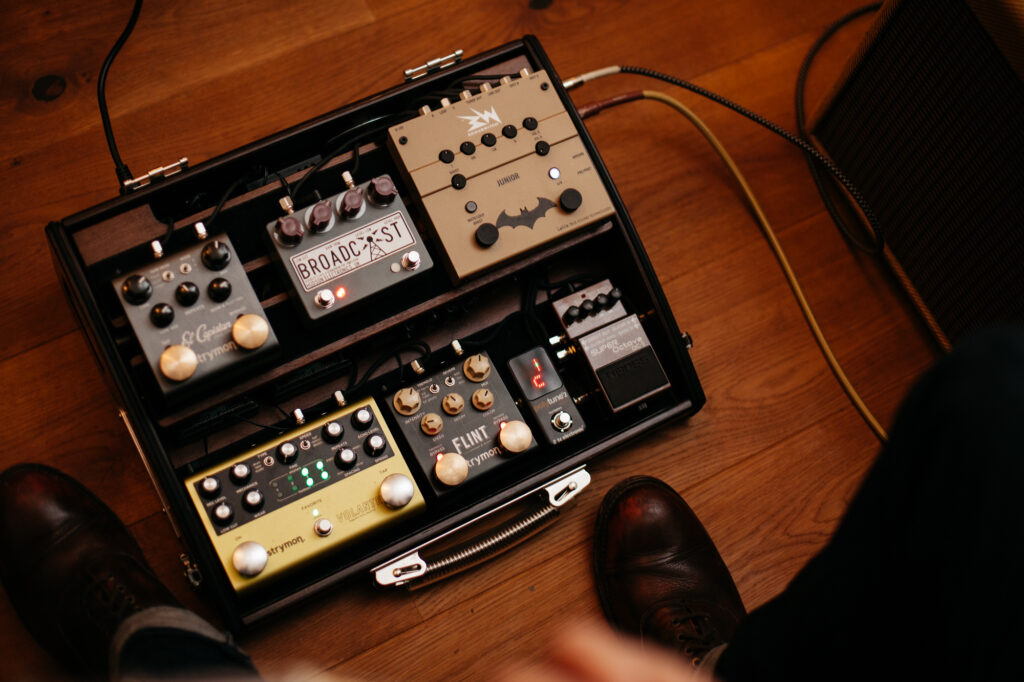 “My effects are predominantly Strymon. All their pedals sound like music to me. I’m in love with their delays, so I got myself a Volante. That thing eats up whole days at a time and I’ve hardly scratched the surface. I use TC Electronics tuners with the big, bright displays. Good for a short-sighted person on a dark stage. I also have a Hudson Broadcast and Origin Effects Slide Rig for louder moments and slide sessions. I really like using Lehle for board routing. Those pedals just sound so crisp. I’m always looking for new ways to condense my rig, to make it lighter and sound better. There’s also a part of me that loves boards and cables every bit as much as guitars. Pedal websites keep me awake at night. Is it okay to admit that?” 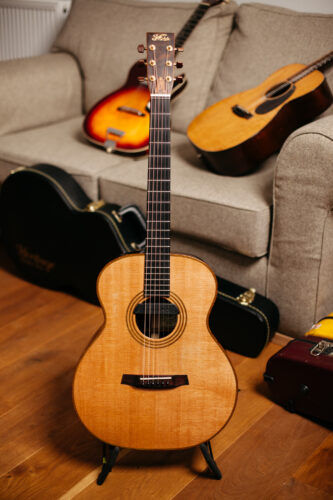 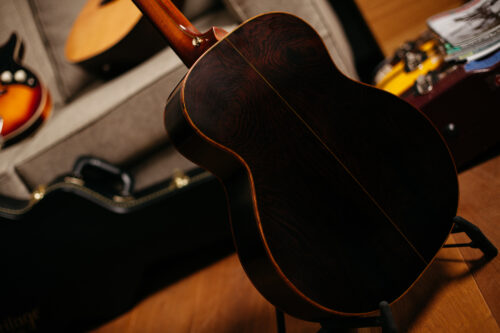 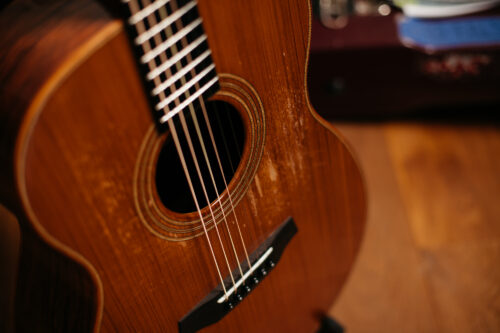 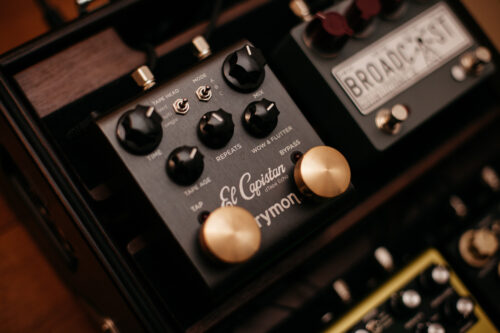 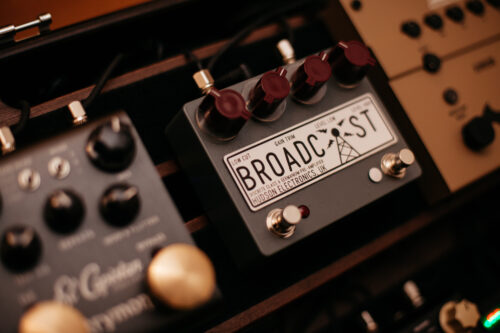 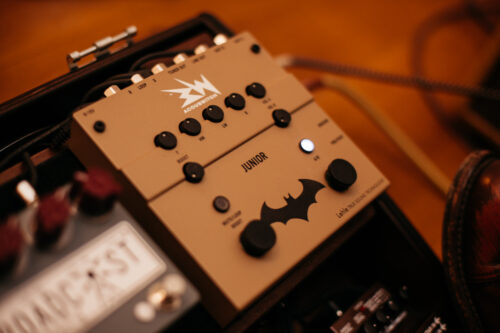 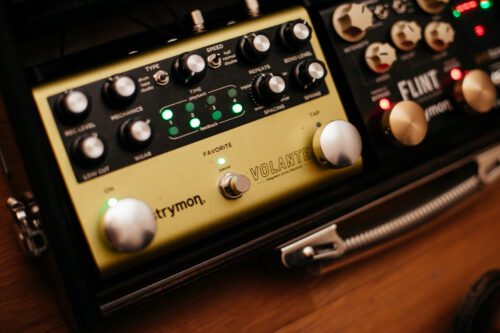 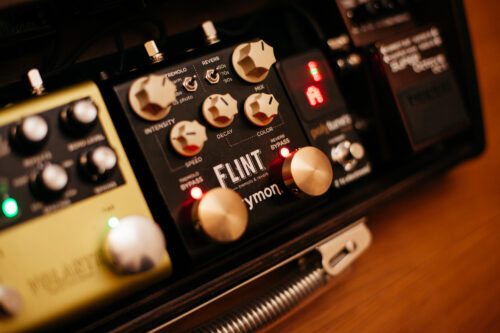 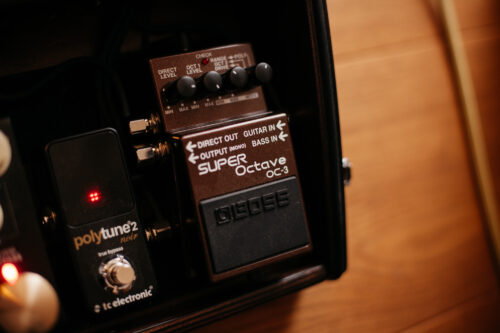