Lundberg’s Fretted Instruments, on Dwight Way in Berkeley, California, was one of the first music stores on the West Coast to focus on both the sales and repair of vintage acoustic guitars and related instruments. Jon and his wife Deirdre moved to Berkeley in 1960, when the folk music revival was in full swing. Aided by another Berkeley repairman, Campbell Coe, and Barry Olivier, who later organized the Berkeley Folk Festivals, the Lundbergs opened a small shop on Dwight Way between Shattuck Ave. and Fulton Street. It was close enough to Telegraph Ave and the southwest portion of the UC Berkeley campus where everyone hung out, but not close enough for that scene to be too distracting. If inspired, one could hike from a political rally at Sproul Plaza to Lundberg’s front door in less than 30 minutes.

Yet although there was plenty of politics in the folk music of that period, Lundberg’s shop was not where you’d be likely to hear the pop side of protest songs. The cause celebrated at Lundberg’s was the discovery and revival of earlier styles of music, and the then-unrecognized joys of older instruments. And, thanks to high ceilings and wood floors, with old glass-front cabinets around the perimeter, Lundberg’s offered a great-sounding room with a decidedly un-commercial vibe. Longtime employee Larry Hanks, with full beard and wire-rim glasses, often covered the front counter with a newspaper he was reading with such concentration you almost hesitated to interrupt him, but that also meant you could play any instrument within reach.

The instruments and accessories offered for sale were only part of the shop’s appeal anyway. Jon did many repairs himself in the early days, then added a small staff of qualified repairmen as the business grew. The most complex and demanding repairs and restorations were done by Mario Martello, whom Jon had discovered at the Satterlee & Chapin shop across the bay in San Francisco. Mario was able to turn many of Jon’s dreams into reality, including putting cutaways in guitars with a damaged upper treble side, or making 5-string necks for tenor or plectrum banjos. Guitar manufacturers were far less inventive then than they are now, and Lundberg’s was a shop where curious performers might find a hybrid style, such as an archtop guitar where the damaged face had been replaced with a flat top that matched the rest of the instrument so well it looked original. By the mid-’60s, when any musician touring North America would wind up playing in San Francisco or Berkeley, checking out the eclectic selection of instruments at Lundberg’s shop was a must. The list of customers from the music industry’s Who’s Who was long and impressive, but there were few signed posters or photos on display in the shop. Name-dropping, or “stars shopped here” suggestions, just weren’t a part of the Lundberg style, and if someone well known expected special treatment, Jon was more likely to disappear into the back room. Local musicians who made it, such as Country Joe McDonald, found Jon’s shop to be one of the few places where they could be themselves again.

Jon’s curiosity and appetite for cool old stuff didn’t stop with musical instruments, and he was ahead of the popular curve in many other types of antiques. Toy trains, coach-built cars from the 1920s and ‘30s, Tiffany and Handel lamps, and especially vintage clothing all seemed be in competition for his focus. By the mid-1970s, racks of silk ties and zoot suits began to appear in the front display room of the Dwight Way shop, and soon as much space was devoted to vintage men’s clothing as to guitars. The name Lundberg was still legendary among followers of the fretted instruments scene, and vintage guitar prices were taking off, but Jon’s interest was clearly shifting.

In the early 1980s, Jon moved from the Dwight Way location to a much smaller shop in Kensington, a small community just a few miles north of Berkeley. Although a few instruments might be found there, it was the haberdashery that consumed Lundberg’s interest from then on. During the evening of Oct. 25, 2000, he fell asleep on a sofa in the back room of his vintage clothing shop while smoking a cigarette, setting the place on fire. It took months before he recovered enough from severe smoke inhalation to leave the hospital. He then retired to Roseville, California (near Sacramento). 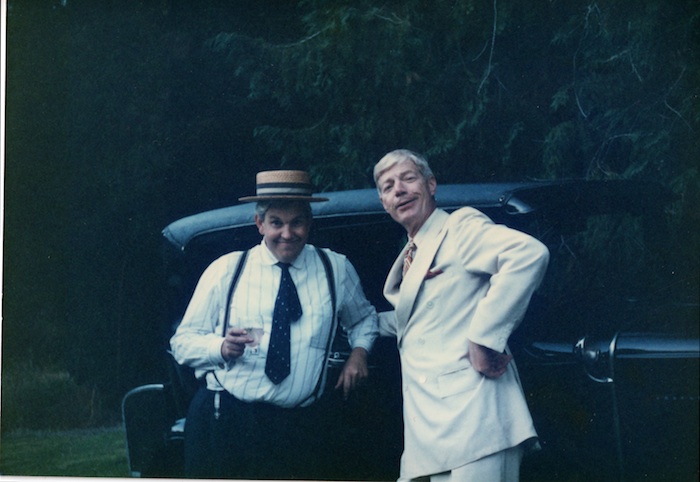