We’re in the midst of interviewing Jackson Browne for a future issue of the Journal, but, while we assemble that, we thought it’d be interesting to briefly chat with Browne’s guitarist, Mark Goldenberg. Goldenberg has played with everyone from Bonnie Raitt and Willie Nelson to Ziggy Marley and William Shatner, and he continues to do sessions when his touring schedule permits. As dozens of YouTube clips can attest, the Ted Greene alum is quite a gear and tone connoisseur. As it turns out, though, the entire Jackson Browne concert caravan is a roving guitar-geek paradise. 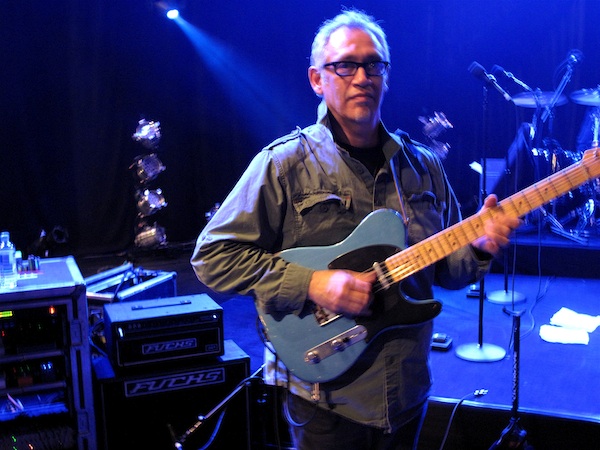 Fretboard Journal: Can you walk us through your career?

Mark Goldenberg: I started out in Chicago. I played in local bands. I went to music school in Chicago: the Chicago Conservatory and the Chicago Musical College. I got in a band, and we got a record deal. So we came to California to record our record, made a record and promptly broke up. I stayed in California. First, I tried to make it as a singer-songwriter, and then when my money ran out, I fortunately got a gig playing guitar with Al Stewart, right before his Year of the Cat album broke.

So I went on tour with Al Stewart, and that sort of started me in the music business in California. I went from playing with Al Stewart to a singer named Wendy Waldman. From that band, I met Peter Bernstein, who played bass. We started this band called the Cretones. We made a Cretones record and then we were very lucky that at the time … Linda Rondstadt recorded a few of my songs. It went on from there. I played with Peter Frampton for a while, which was great; I was a staff songwriter at MCA for a while … and then I kind of got away from the guitar for a while.

I did that up until about 1989 when I realized that no matter how much I practice that Brahms thing, what I was trying to play on the piano wasn’t going to sound that good. And then I was like, “Hey, guitar! That was fun!”

I started thinking about taking lessons because, other than taking classical guitar lessons when I was 14, I hadn’t officially studied the guitar. So I called a local guitar player named Joe Diorio. He said, “I’m way down in Orange County, why don’t you call this guy Ted Greene?” I had no idea who Ted Greene was.

I called Ted, and he was really nice. He said, “I’m a little full, but if you can call me back in three weeks, I’ll see if I can fit you in for a lesson.” I called him back in three weeks and I think that was kind of a test: He wanted to see if students were really serious. This was around 1989. I went for my first lesson with Ted, and he tape-recorded me playing this sort of furtive bossa nova thing I was working on. He’s like, “Oh, interesting … interesting note choices!” which I learned later was his way of saying “not so interesting note choices!”

Then I started studying with him, and that was a total revelation. That was a watershed moment for me in terms of looking at the guitar. Ted was like four guitar players playing at the same time. He had a phenomenal ability to freely improvise multiple guitar parts at the same time, on any tune, in any style.

FJ: Was that sort of what you looking for when you got the lessons?

MG: I had no clue. I thought I’d learn some more stuff on guitar that I could apply to songwriting … harmony. But then it turned into a whole thing where we spent a lot of time on chord voicings.

It was very elevated on a technical level–even his easy arrangements were not that easy. But they were very instructive, and instructive in the way you could be poetic in the guitar. It was a real eye-opener. Getting a lesson from Ted, even just one harmonic thing that he’d show you, could send you down a path for months.

FJ: Was he a big tone guy or was it all more technical for him?

MG: He really was a tone guy. He had an incredible ear. I once brought him a track that I worked on, and he listened to it for two seconds and said, “Is that a 335 going into a Fender Vibrolux?” and there’s no way that he would know I even owned those!

FJ: When you’re on the road with Jackson Browne, are guitar-geek conversations happening all of the time?

MG: There’s a certain amount of geekiness that goes on all of the time. The other day, at sound check, we were playing some song, and after the song, Jackson walks up to me. I’m thinking, Oh, man, maybe I played something weird on this song. And he goes, “You know, I’ve just been thinking about how mahogany is kind of bright in the midrange!” There’s a lot of gear talk going on. And it’s because there’s such a wide range of stuff we use. There’s a lot of acoustic stuff going on and a lot of electric stuff going on.

FJ: Between you and David Lindley and Jackson, who is the biggest gearhead?

MG: I think it’s a three-way dead heat for sure. I think we’re carrying over 50 guitars for our show, for the three of us. Jackson carries lots of different acoustics, because he tends to find a song in a guitar–there’s an appropriate guitar for a certain song that he plays.

There’s also lots of tunings and lots of detunings. Over the years, some of the pitches of the songs have gone down a half step or a whole step. I’ll have a couple of guitars tuned down to E-flat, so I can play them in open keys, because it sounds appropriate. They’re down a half step for the ease of singing. I carry like four electrics and a couple of slide guitars and an acoustic. I’m also playing a 12-string, nylon-stringed Spanish instrument made by Flip Scipio. I also have a slide guitar which is a Strat body with an Oahu lap-steel pickup and a Teisco pickup; he made that for me as well.

FJ: One guitar tech for all 50 guitars?

MG: We have two. Basically, Manny Alvarez techs for Jackson and me, and then there’s another guy, Jason, who is helping David out. David has violins, bouzoukis, ouds … he has a lot of stuff going on. It’s scary to look at. It’s a lot of stuff.

FJ: What are your go-to guitars?

MG: My number one go-to guitar is always a Fender Telecaster. I have vintage Teles, a ‘52 and a ‘53, but I leave those at home. I have a Custom Shop NoCaster reissue that is great. Lance Lerman from LSL Guitars made me a very nice Tele-style guitar, so those are my main Teles.

Then I’m using a Thorn; it’s a double-cut, very similar to an old Les Paul double-cut Junior … slab body, thick body. And it’s got a ‘60s P-90 on it, and that’s a great, throaty-sounding guitar. I have my ‘55 Les Paul Junior set up for slide, and the Scipiocaster set up also for slide in different tunings. That’s the rig for this tour. And I’m using a Fuchs ODS 50 for my stage amp.

MG: I have a ‘65 Epiphone Howard Roberts, which is a carved-top archtop with a round center hole. When I recorded my record, I strung it up with 13s and then tuned it down to C’s. At the time, I was experimenting with solo guitar stuff, and having lower bass notes made me feel more secure. So I went really low pitch with it. I basically recorded it with a couple mics and a DI. I worked really hard to have an archtop guitar sound like an acoustic. Most folks think it’s a flattop, and, you know what, on the next record, I’m just going to go with a flattop. I need a cutaway … I’m thinking of getting an old CF-100.

FJ: Was there a moment in your life when you realized you were a guitar nerd?

MG: Totally! It came early, when I was about 17 or 18. My neighbor’s older brother decided to sell his guitar–it was this old Fender guitar that was all yellow–and the brother wanted like $75 for it. So I go over there, and it ended up being a ’57 Tele. A couple of years later, I sold it for $150 and thought I was really smart. The guitar nerd thing started early for me. I started out playing classical guitar, and when I saw the Beatles on TV, I said, “Dad, that’s what I want to do!”

He said “take another year of classical guitar lessons, and I’ll buy you an electric guitar.” That’s how I started: I had an SG Junior and a Kalamazoo amp … it’s still a rocking combination! 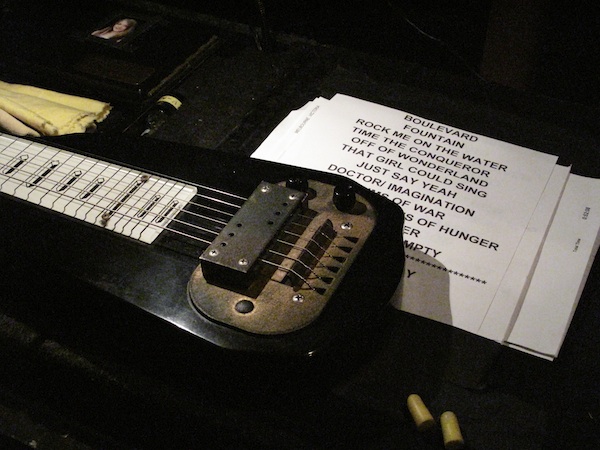 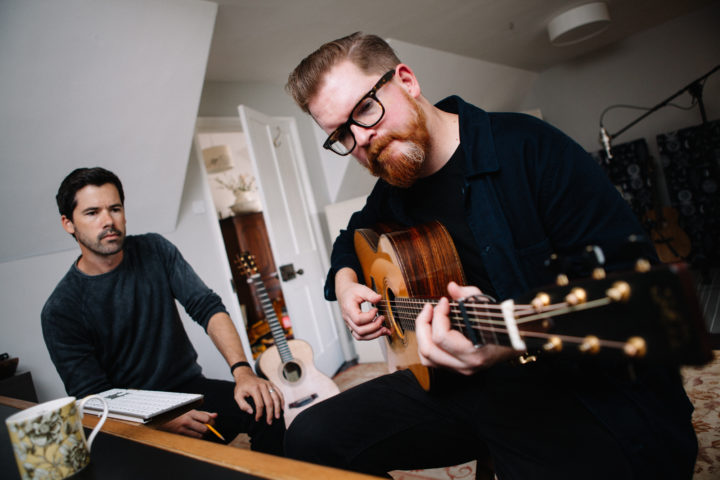