In FJ #22, luthier Jeff Traugott and musician Charlie Hunter interview each other about how they collaborated on the unusual seven-string that Hunter plays. At first glance, Hunter’s guitar appears to be a pretty standard instrument. A closer look reveals that it’s actually a bass/guitar hybrid. To learn more about the history of this instrument you should check out the interview in the Journal. But if you want to learn a bit about what Hunter actually does with his Traugott guitar, here’s an interview with Hunter about the making of Public Domain, his second solo CD.

Fretboard Journal: So what was the genesis of Public Domain? What gave you the idea for making this album?

Charlie Hunter: Well, I had been working a lot on my solo chops and playing a lot of drums to really get that correct feel together. I spent a lot of time as a young guy wishing I was Joe Pass and listening to that kind of thing, but as I’ve gotten older, I’ve gotten more and more into the groove and the feel … the soul. And that brought me to listening to people like Blind Blake and Joseph Spence, people who just have that pulse, where they were the kind of person that you would call if you were going to have a dance. You’d call one of those guys to play at that dance.

And the idea for doing these public domain songs is, well, you just try to pick the good tunes, you know? I’ve known a lot of those songs through the years; it’s not like I just discovered them. A big part of choosing things like “Limehouse Blues” or “Avalon” is that you would be able to tell what song it was when you heard it played, even though I put it through the ringer most of the time. Also, my 99-year-old grandfather — he’s still around and he knows all this music first hand — and I thought he’d like to hear my versions. And, this is also a big deal, because all the songs are in the public domain, they are now free to use.

FJ: Some of the tunes, things like “Indiana” and “St. Louis Blues,” have been standards in the jazz world since the very beginning. That was a nice sort of nod to the past as well.

CH: Yeah, but for me it’s more about the feel and the intent than it is playing anything style specific. It’d be really silly if I tried to play that stuff strictly in the style of Eddie Lang or Louis Armstrong or whoever. What’s the point of that? That’s crazy. So then I kind of re-imagined those songs, you know?

FJ: How do you go about re-imagining songs like “Danny Boy” or “Alexander’s Ragtime Band?” Do you work on the chord progression first? Do you start with the melody?

CH: It’s all about the groove. It’s just got to be in the pocket and what’s the kind of groove that I hear over that. Then I just count to four and just let it go. A lot of the stuff on Public Domain is not really heavily arranged. They’re just really sketches, and then I’d have a concept as far as the groove was concerned, and then from there I would just let it do whatever it was going to do.

FJ: So the stuff we’re hearing on the CD is mostly improvised?

CH: I’d say it’s about half-and-half. There are definitely some little motifs and mechanisms in there that are kind of pre-conceived, but I’ve got to have space to improvise. A lot of the improvisation I try to do is not necessarily linear improvisation; it may not feel like it’s improvisation to people, because I’m not doing really fast lines or anything, it’s just I’m kind of improvising vertically, so to speak.  I’m really improvising the feel and the counterpoint, the dance between the two or three different parts, the way that feels, kind of improvising with that, I guess compositionally improvising.

FJ: The playing is so complex and there’s so much going on. I could sort of get my head around what you’re doing as a listener, but I sure couldn’t play it myself … to improvise all those different levels simultaneously.

CH: It’s just about keeping the time and the groove happening. I don’t want to hear that frilly, Victorian kind of soloing kind of thing. I just want it to groove and feel good. For years, I would go for anything. I would play very opportunistically, always looking for an opening to play something. So I would do whatever I needed to do to make that little silly moment happen that I thought was so cool. Now I have exactly the opposite idea, where everything has to serve the feel and the groove, everything. And if it doesn’t, that’s the stuff that whenever I listen back, it’s always, “Ooh, that didn’t sound good.” Or “That’s embarrassing.”

Why is it embarrassing? Because I was trying to do something “fancy” instead of just keeping the feel real good. Because this instrument has the bass range and the guitar range on it — most of both of those things — you can’t really approach it like a guitar.  That’s out the window. For the first five or six years, I approached it like a guitar and now I do not. It’s way tougher and more demanding in terms of how you have to move the notes and move the time.

FJ: What guitar did you use on the CD?

CH: The Jeff Traugott guitar. That’s pretty much the guitar I’ve been using almost exclusively for the last couple years.

FJ: That’s the guitar you and Traugott discuss in FJ #22. Can you tell me a little bit about its evolution? Can we even call it a guitar anymore? Or is it something else?

CH: I think it’s something else at this point, or at least my approach to it is. As I’ve gone on, I’ve always tried to move it forward. I definitely was coming from the guitar mentality at the beginning and I came up at a time when playing really, complex, fast lines over a lot of harmonic changes was really an important thing, or so we thought it was. I’ve gone farther and farther away from the guitar to having this thing really develop its own feel, so to speak, which, to me, at the end of the day, comes more and more out of the drums. Not like hitting it like a drum, although how you attack the string is very important. You have to be very precise like a drummer has to be precise with where he or she hits the drum. It needs to be done in a way where you really feel the intention of what they’re going to do. And if I do that on a regular guitar, I feel I’m going to rip the thing apart almost.

And through the years I changed the tuning, because I had it tuned like E. I played an eight-string and it was like E A D A D G B E … like the lower three were the bass and the higher five were the guitar. After a while I realized that this is kind of silly, because the bass strings are so floppy sounding. The guitar strings sound great, but the bass strings are just flop city.

So I tuned up to F with the eight-string and that helped. I don’t really like this high string anymore, so I got rid of that, and then a couple years after that, I was like, I’m going to change this tuning up to G and just see how that is. So now my Traugott has three bass string and four guitar strings.

That’s where I’ve been ever since. Two or three years ago I did that and I’m having more fun with this instrument than I’ve ever had. I don’t want people to think I’m looking down on the guitar — anything but that — I’m just saying that was my taking off point. I’ve got really a long way to go getting away from that taking off point, but I’ve gone far from it in the last 20 years and I hope to go a lot further if I get to keep on practicing every day, which I love to do.

FJ: I’m familiar with the fanned fret neck, but did you find any difficulty getting used to it?

CH: It’s really not a big deal. It looks really weird when you’re not playing it, when you’re looking at it from a distance, but it’s not all that big of a deal.

CH: Man, I hope so. With my band or my trio, I’ll do a few little solo numbers. It’s so fun and such a challenge. But I get really bored of myself after a while. Just being on the road with myself gets pretty boring. But I love the challenge of playing solo. That’s really fun.

FJ: There’s no place to hide, that’s for sure.

CH: There is no place to hide, but I like that. I like the excitement of that. It’s a great challenge. 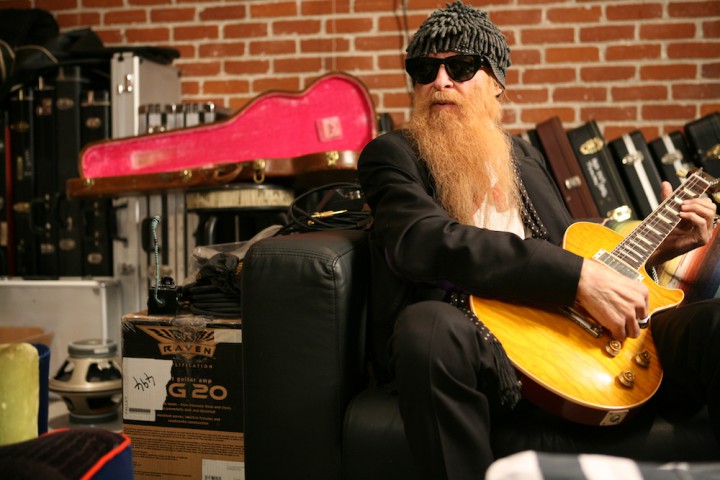 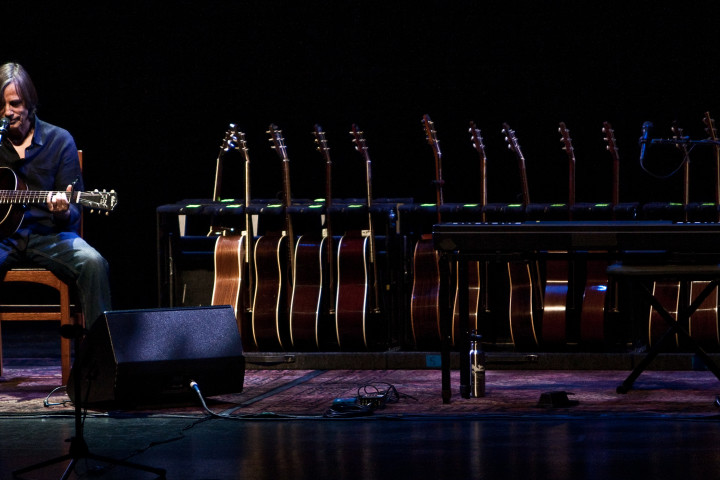