This story appeared in a slightly different form in issue 24 of The Fretboard Journal.

When Alex Glasser of Iron Horse Instruments graduated from the Roberto-Venn School of Luthiery he hoped that his first major commission would be an awesome guitar for a huge rock star. Instead, it was a ukulele for a guy who makes funny voices for cartoons. “A friend of mine knew Dave Willis, the producer for Aqua Teen Hunger Force and Squidbillies,” Glasser explains. “Dave wanted to commission a uke for voice actor Dana Snyder with inlays of his characters Master Shake from Aqua Teen and Granny from Squidbillies. I love both of those shows so I was totally stoked to do it.”

Along with making his own instruments, Glasser worked in the repair department at Gryphon Stringed Instruments, where he was able to examine lots of ukes in various stages of disrepair. “Dave and I decided that Dana would like a soprano uke, so I based the design on a 1920s Martin Style 0 I was working on that was pretty badly broken up that allowed to get a good look at its guts,” Glasser says. “The whole instrument was supposed to be a vehicle for the inlays but as I got into it I decided that I wanted it sound as good as possible. I ultimately spent far more time on it than I got paid for, but I know the result was worth it.” 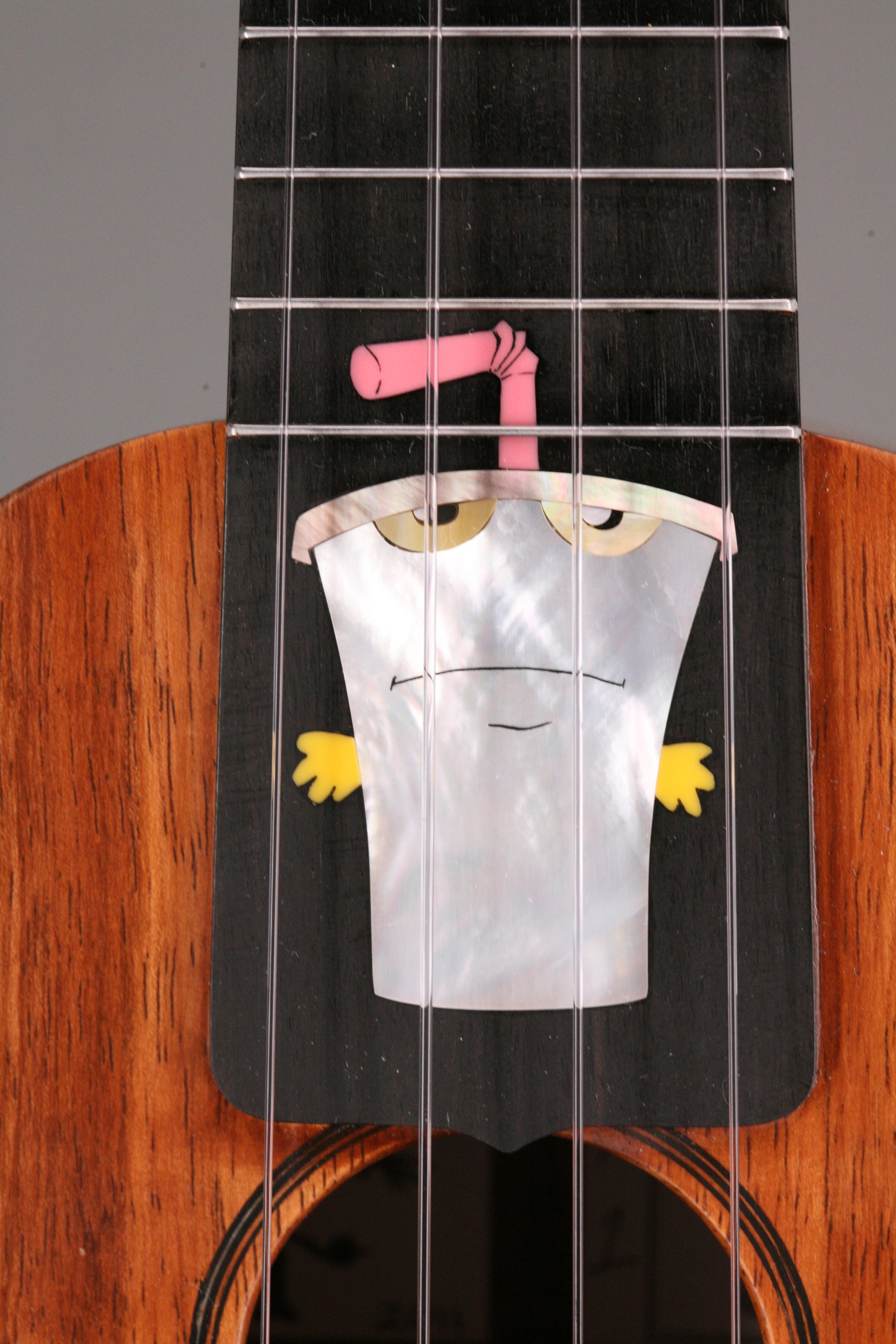 “Dave wanted Master Shake and Granny inlaid somewhere on the uke,” Glasser says. “Granny fit really well on the headstock between the tuning pegs and I decided to add an extended fretboard and put Shake there. Shake and Granny are both made from pearl. Shake’s straw and hands are made from reconstituted stone, which comes in very cool colors. I decided to make the nut out of mother-of-pearl, to match the inlays.”

“I wanted to make the uke out of koa,” Glasser says. “I was able to get the top back and sides cut from a set of book-matched guitar sides, which gives the instrument a very cool, unified look. And rather than use lacquer or shellac, I finished it with an oil, which is very light and flexible. I like the way it looks, sort of more vintage, and in my experience, a light finish sounds better on ukes.”

When Dana Snyder got his uke, he was surprised at the gift and very pleased with its sound. “I’ve been playing uke for as long as I can remember and this is the best sounding one I’ve played,” says Snyder. “I love songs from the 1920s like ‘Princess Poo-Poo-Ly Has Plenty Papaya’ and Alex’s uke works really well for those wonderful old ditties.  I love the inlays and I think it would be very cool to have a series of ukes based on all of the other characters I do. Are you listening, Dave?”

Podcast with Char and Gordon Mayer of Mya-Moe Ukuleles 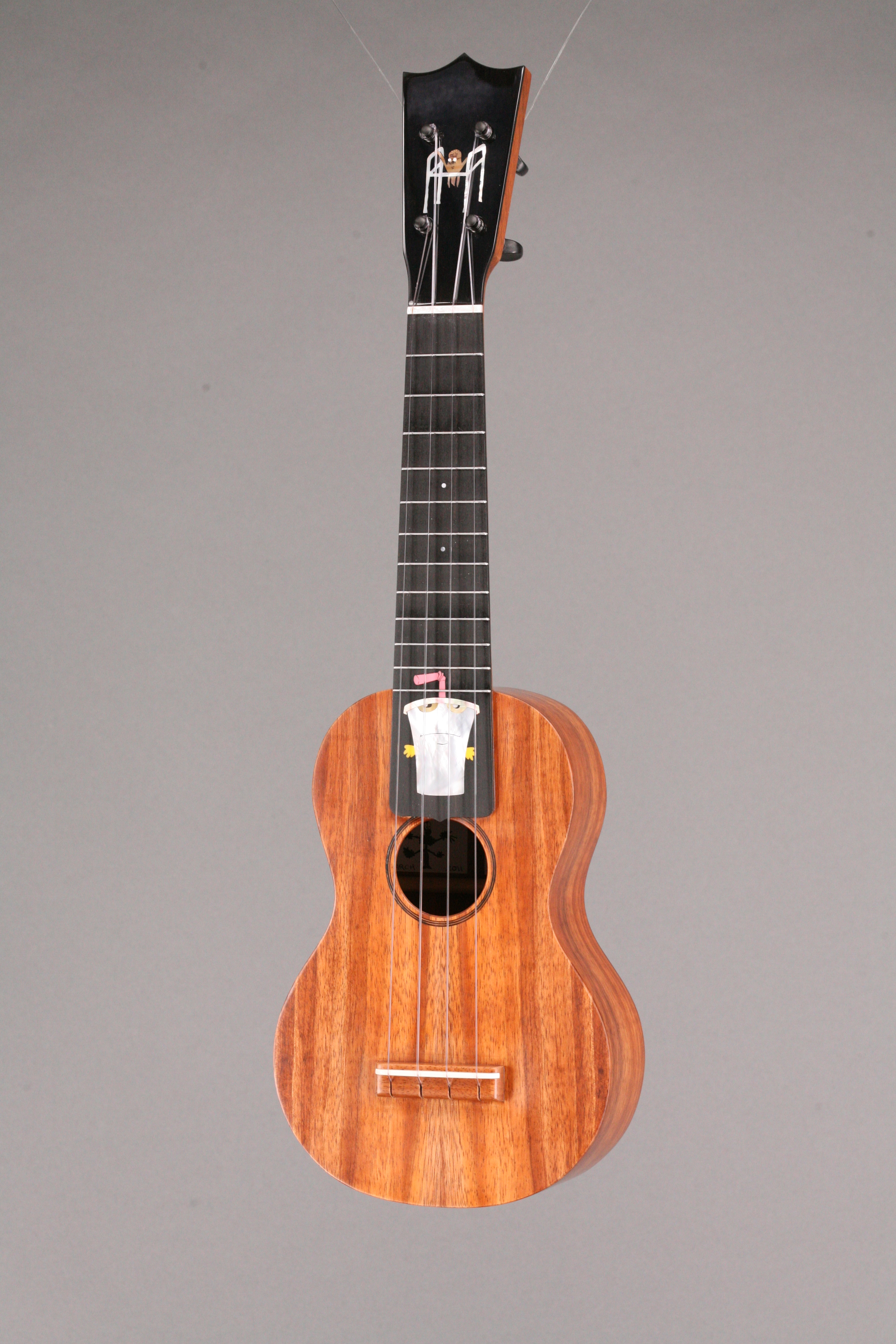 Brother, Can You Spare a Mil’? 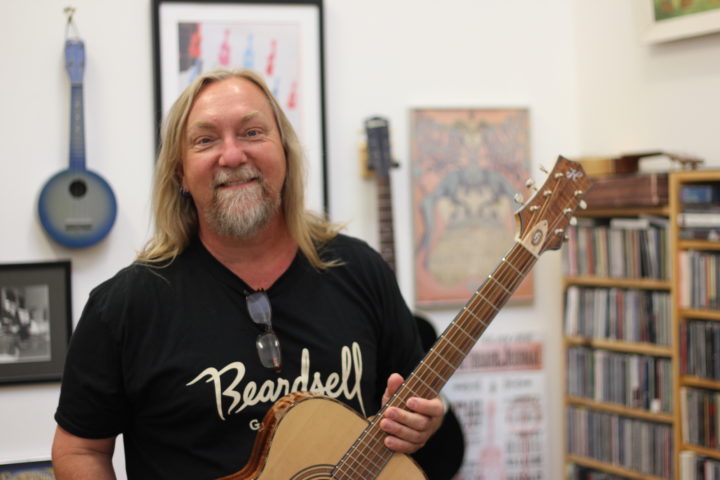 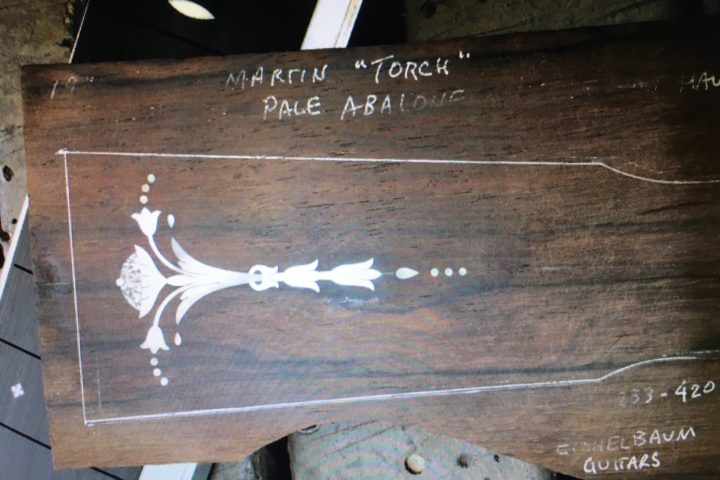