We’ve been a fan of Matt Eich’s work at Mule Resophonic Guitars for a while now–you gotta love someone who builds steel guitars in Michigan–but for some reason it took a kick in the ass from a reader in Australia to get us to reach out to him. Matt’s resonators are handmade wonders, designed to transcend traditional resonator expectations, expanding the tonal palette, easing playability. Recently he’s added steel “Mulecasters” to his lineup, treating them with the same care, tricking them out with multiple benders, creating modern artifacts for your inner steampunk. Here’s how our conversation went… 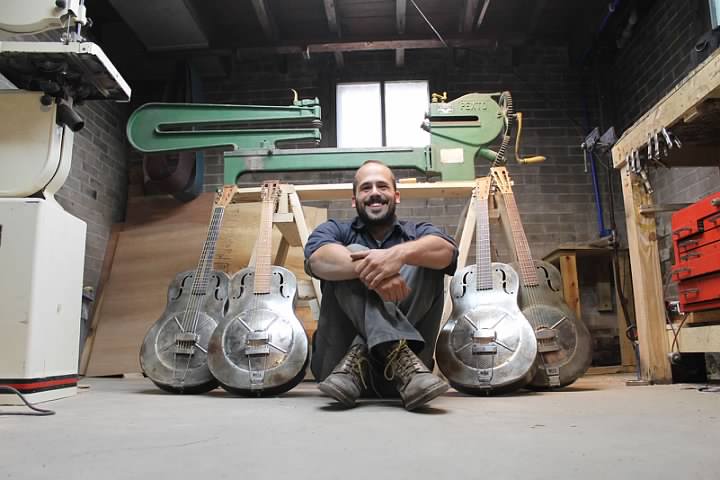 Matt Eich: I have a steel tricone on the bench at the moment. I really love what the tricone setup does to the sound, but felt it did a bit too much of it and I wasn’t a fan of the traditional tricone look. So I build my tricones with the same f-hole and round coverplate bodies as single cones. It turns out that was the very first prototype National set up as well. The f-holes keep the sound closer to a single cone sound than you would think, with some added sweetness and a little bit of compression. It’s my favorite setup.

ME: I graduated high school and went to Roberto-Venn. Building guitars was what I liked to do and it required the least amount of school–that was my thinking at the time! Aside from a few awesome years at Huss & Dalton, I wandered around the country a bit working manufacturing jobs and building guitars on the side in any basement or garage I was allowed to. I lost my factory job in 2008, like a lot of people did, and found myself back in Michigan where I grew up. I went to see Kelly Joe Phelps play up in Traverse City and he was playing his resonator. Ten years earlier his music had turned me from my metalhead ways, and I left that show wondering if I could build steel resonators–resonators that looked like the natural steel, not chrome-plated or powder-coated, and also sounded less like a traditional resonator guitar. 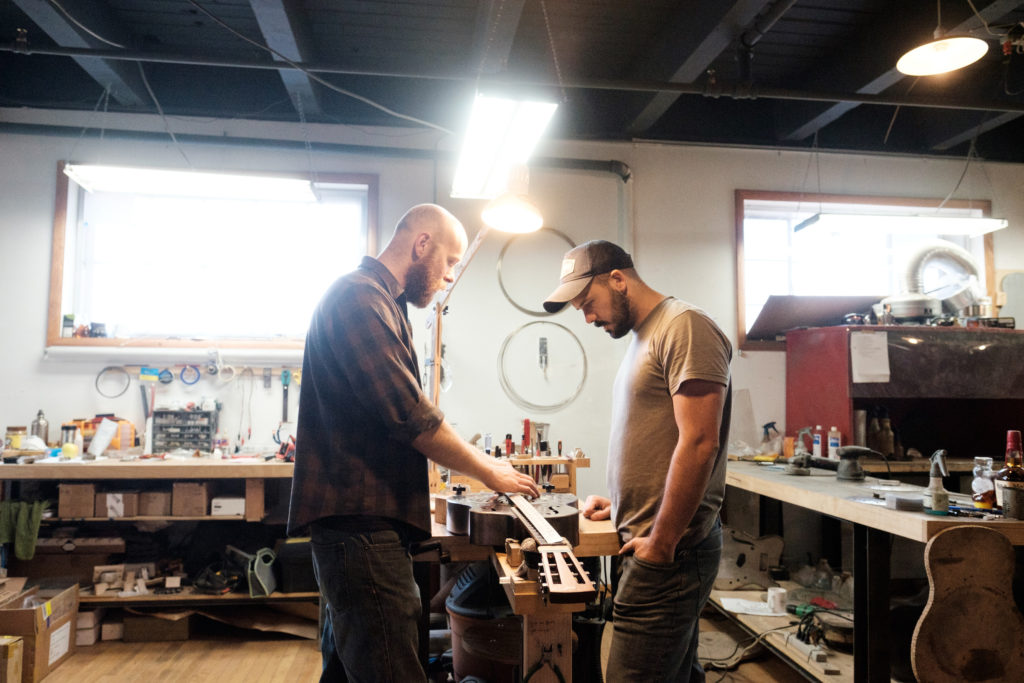 FJ: Huss & Dalton seems a world apart from resonators–how much of your work there translates into your Mule work?

ME: Almost all of it! When I started these guitars I had never cut a piece of metal or welded a piece of steel. So that part I had to figure out on my own, along with the geometry of these particular guitars. That took some doing. A lot of doing actually.

But guitars are guitars. I had the opportunity to carve  and set necks with Jeff while I was there–I did around 450 of them. I milled all the stock, made all the parts. I got to do much more work than I would have by myself. That was a huge benefit. I worked right next to the two other guys who did the rest of the process. The huge quantity of work I was able to do helped me tremendously. They build traditionally-styled guitars done in a new way and that has shaped my perspective on what a handmade guitar should be.

Even the Mule name came from that time of my life. I had a car that needed a new engine and Mark Dalton helped me replace it. I worked on his farm baling hay for a few weekends in return. He uses mules on his farm and I got to learn about the tremendous and elegant work capacity of the animals. I think part of what has held resonator guitars back is the thinking that they are completely different and need to be that way. I approach them much more like traditional acoustic guitars, and that approach has led me to a different sound, and a much different market than solely the blues crowd. They are what is traditionally expected done in a new way. 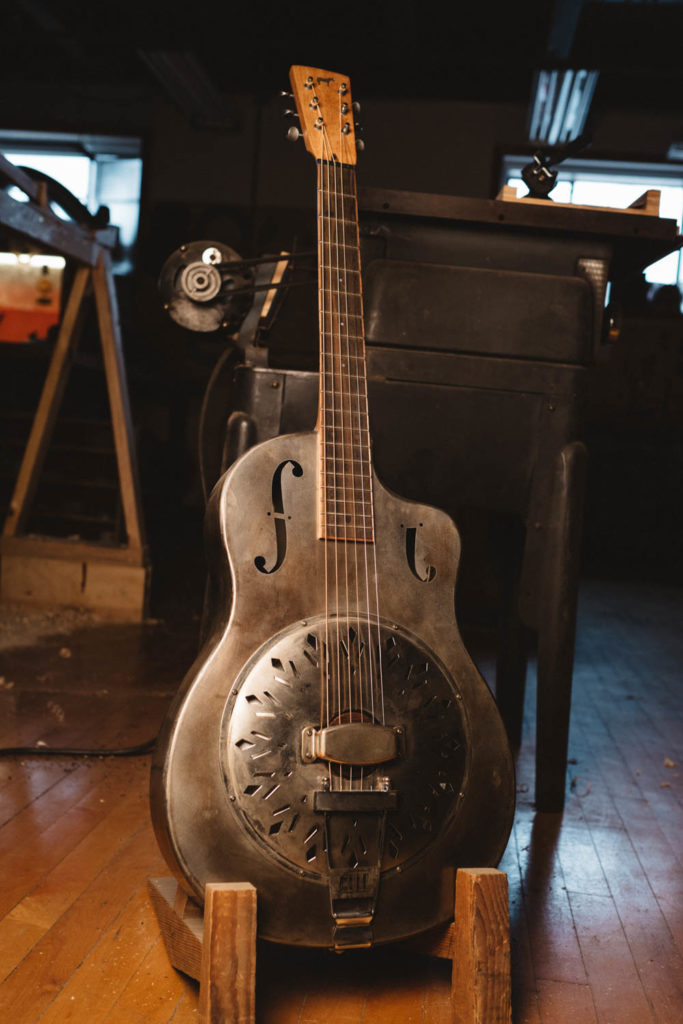 ME: I have a few not-so-clever phrases around the shop and one is “action creates inspiration.” A lot of this work is awesome, and a lot of doing this professionally is very, very hard. I think inspiration does happen–when a player sits down with one of the Mules and hears things he hasn’t heard and that influences his playing, there just isn’t a word for that feeling. Then this experience becomes less about the guitars and more about the individuals who are joining in by buying guitars. But I think more important than inspiration is the action and the process of getting there. That action and experience creates those opportunities. So I look for the action that needs to be taken.

ME: I built a guitar for Kelly Joe Phelps, and that was a real amazing and humbling experience. It’s not very often things get buttoned up full circle like that, and to be able to look back and see why the story unfolded like it did is pretty amazing. I still re-read our emails when I need a boost. This past year we built a guitar for Tim Van Der Kuill, who is Adele’s musical director and guitar player–a real cool cutaway guitar with a three-lever Hipshot bender on it. I got to go see her in Rochester Hills and there was Tim behind her playing his Mule in front of all those people. It was a moment I was able to turn off my maker-mind and just be a fan who got to be part of the show.

ME: My shop is in Saginaw, Michigan. I started Mule in a garage closet, upgraded to a basement for 2-1/2 years and then two amazing people, John and Terri, had this 1600 square foot space in a warehouse building that they helped me get into. Wood floors, 14′ ceilings, windows, 14″ beams. I walked in and wanted to run around in circles in joy. I had been trying for 13 years to have a real shop space like this. My brother Phil and friend Adam Smith also work with me here. Everyone has their own area; it’s been really amazing.

FJ: Do you have a particular philosophy about the materials you use?

ME: My philosophy is simplicity. I use stainless steel or brass, maple and ebony. There are no other choices for material. I love that. This works, it makes the sound I want it to make. I think choices bog us down sometimes. 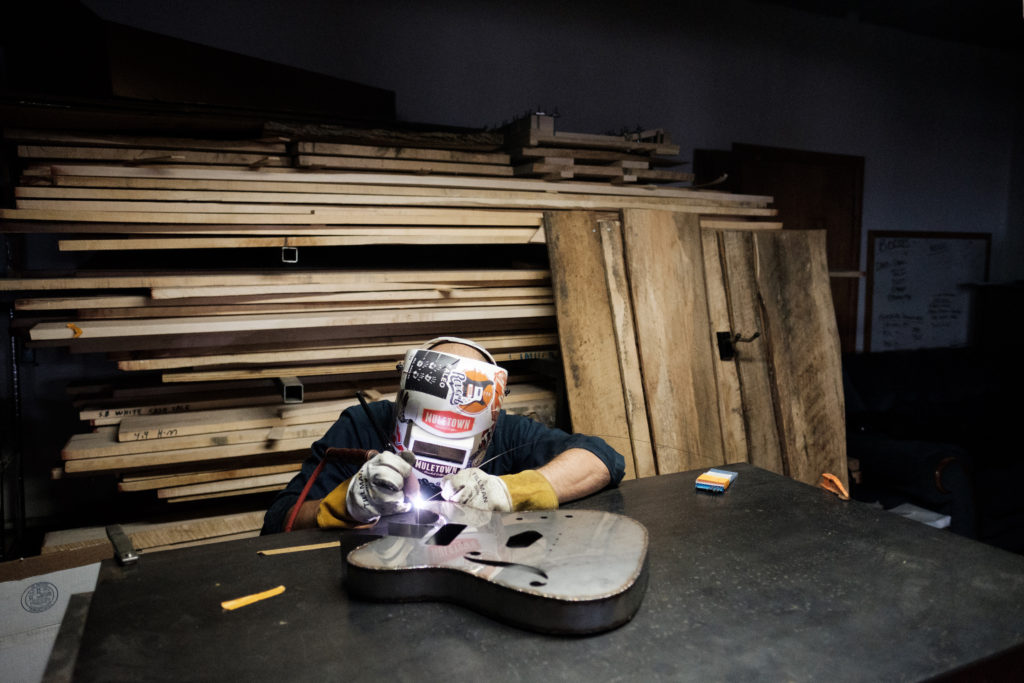 FJ: When did you add the “Mulecaster” to your lineup? How did that come about?

ME: We’ve been doing the Mulecaster for almost a year now. It came about because I knew I would have to TIG weld that design and I wanted to buy and learn how to use a TIG welder! But it’s so much more now. We can powdercoat them so they look like a “normal” guitar, but the amount of acoustic volume you get out of a hollow steel body really affects what kind of sounds you can get from it through an amp. The range is so big, the touch is very dynamic. It sounds alive. We’ve started winding our own pickups for them. It’s been really fun.

ME: I’ve built a couple baritones and the timbre is amazing but the body size is too small for the low register. The lower bout on a reso is 14″, so for guitar #300 I’m going to be making a slightly larger body resonator, with a longer 25.5″ scale length. This would be a guitar made more specifically for an open C tuning. Tuning down to open C is a really cool timbre, guys are starting to do that more frequently now and these specs would help in that scenario. 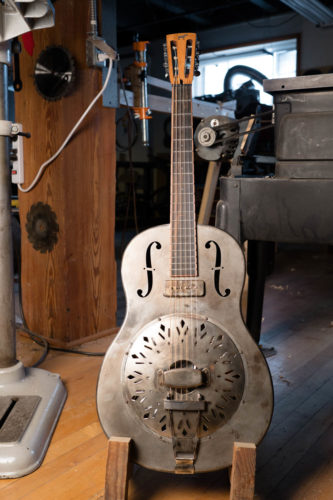 From Nancy Sinatra to Henry Rollins: The Story Behind Reuben Cox’s Autographed-Filled Guitar for Planned Parenthood 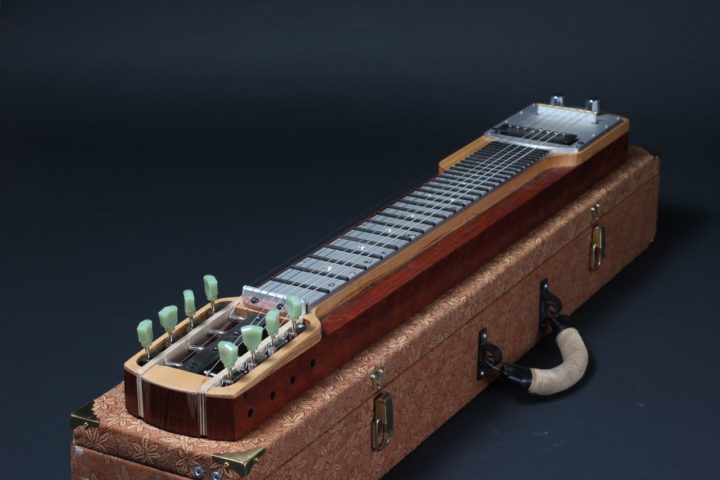