I’ll go right out and say it: I usually hate autographed guitars. Yes, I know there are great examples of servicemen carving their names into WWII-era ukuleles and fans chasing down their lifelong blues heroes to get a signature on a pickguard… those I get. They tell a story. But I never understood the appeal of a Korean-made mass market guitar that happened to be signed by an artist, who probably never even bothered to strum it once, going to auction.

That bias aside, I have to admire the project that Reuben Cox (a frequent FJ contributor and the owner of the Old Style Guitar Shop) has created with his Gibson CJ-165 above, which has recently been autographed by over 100 artists. Months ago, he announced that he was donating the guitar to raise to money for Planned Parenthood and, ever since, the signatures – from both superstar musicians and lesser-known artists – have been piling up. We decided to talk to Cox about this project, the guitar itself and why it now dons the autographs of everyone from Katy Perry to Jackson Browne. He also tells us how you can donate for your chance to win the instrument.

Fretboard Journal: How did the idea for this guitar come about?

Reuben Cox: The idea came after watching a YouTube video of Adam Horowitz speaking at Adam Yauch Park in Brooklyn Heights on November 20, 2016. The park had just been vandalized in one of the many hate crimes that occurred after the November 8th Election. Towards the end of the video, Horowitz says, “Take what you’re good at and what you truly enjoy and lend your services to the causes you care most about.” It was a call to action.

FJ: Did you have any sense of how many signatures you’d end up gathering?

RC: My original ambitions were modest. Ten or fifteen and then eBay the guitar. When Jackson Browne signed the guitar, he said, “You should just jam the thing with signatures.” The guitar has light-colored maple back and sides. It wants to signed everywhere! I had no idea where things would lead but happily the guitar ended up with over one hundred signatures.

FJ: How did you decide on this guitar? Is there a story there?

RC: The shop originally acquired the guitar in a trade. Mike Viola traded it for an electric guitar that I had built. This was almost seven years ago. The guitar was signed by Tom Petty and Viola won it in a charity auction for Hurricane Katrina relief. The guitar hung in the shop for years – I’m not the best at peddling rock memorabilia. It seemed a natural choice for the effort as the guitar already had one signature on it. I was on my way! And yes, the guitar sounds great. The type of guitars that get signed by celebs are usually a bummer. This one is nice.

FJ: When one thinks about autographed guitars, usually the signatures are by rock legends or Hall of Famers. Your lineup is far more interesting and eclectic – everyone from Michael Stipe of R.E.M. to Blake Mills to Lady Gaga. Did you have any parameters when it came to asking artists?

RC: Signed guitars are pretty common but they generally have just one signature. This one is pretty unique. A broad swath seemed the natural way to go. Having Cherry Glazerr’s Clementine Creevy sign the guitar is equally exciting to me as Lucinda Williams signature. And both were equally pumped when they did. When Shepard Fairey was signing the guitar at his office he said, “I’ve got Henry Rollins downstairs. Want him to sign?” It was an experience. And I was never shot with a water cannon or pepper spray!

FJ: Any unique art or scribbles beyond signatures that we should know about?

FJ: You have some pretty huge pop star names on here, including Lady Gaga, Nancy Sinatra and Katy Perry? Was it hard to get these artists to sign?

RC: Los Angeles is a repository for celebrities so it was surprisingly easy. Nancy Sinatra’s daughter is a pal. She hooked that up. Lady Gaga was a tough one! It took a couple tries. I didn’t do it all alone though, I had lots of help. Todd Wisenbaker, who used to work at the shop and is about to hit the road playing guitar with Ryan Adams knows people on Katy Perry’s team and made that happen. Others who were a huge help were Mark Gardner, Zach Dawes, Tobias Jesso, Jr., Luis Galdames, and my wife Miwa Okumura. It was a group effort, for sure.

FJ: How many of the artists who signed actually played a tune on it? Any surprising moments?

RC: Andrew Bird asked to borrow the guitar for one of his Live From the Great Room Broadcasts with Jackson Browne. They sing “This Land Is Your Land” with Andrew playing the signed guitar. There was some minor noodling here and there but nothing else to note. It’s the same strings throughout, though. The same strings touched by Tom Chapin as touched by Sia!

Blake Mills had recently been working with John Legend and offered to drive the guitar from the East side of Los Angeles to Beverly Hills to have him sign. I thought he had a meeting but it was just to get the guitar signed. For those of you not from Los Angeles, offering to spend an hour and a half in traffic for one small errand is something folks don’t generally do. There was a lot of that going on. Mark Gardner reeled in tons of great folks as did Tobias Jesso, Jr. The guitar is steeped in good vibes.

FJ: Was there room for more artists?

RC: Like an overzealous concert promoter willing to turn a blind eye to fire codes, I could easily jam a few more signatures on there, but it’s pretty damn full! Please visit plannedparenthoodpromo.com and donate! 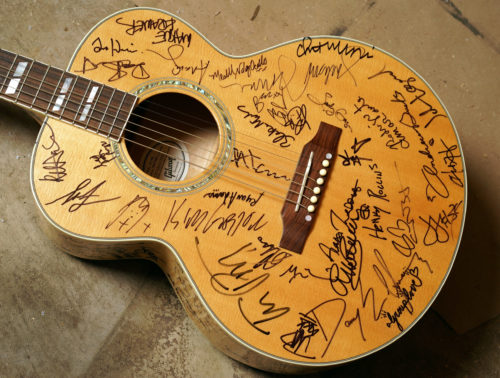 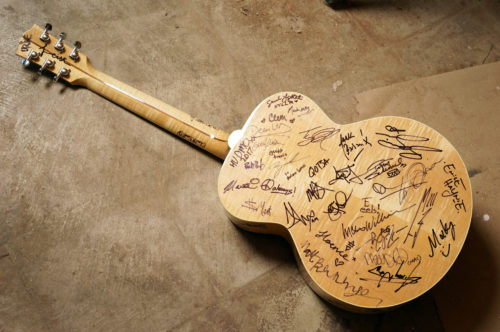 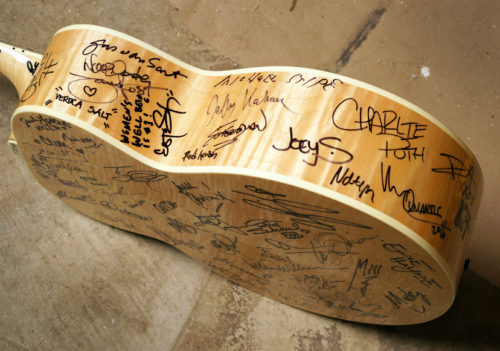 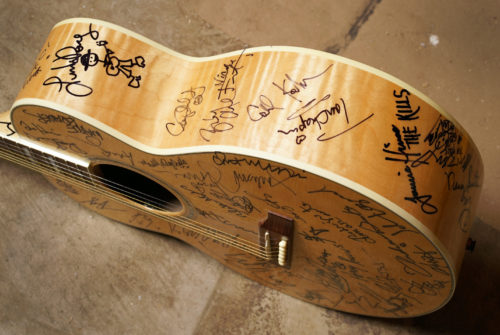 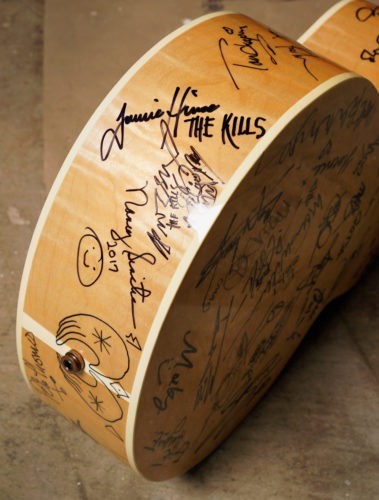 We use cookies to ensure that we give you the best experience on our website. If you continue to use this site we will assume that you are happy with it.I AgreePrivacy policy