Ronnie Cox has been on Mars. He’s been president, Chief of LA PD, a Starship captain, and he is hardly ever nice. He died of suspicious causes during a rafting trip forty years ago, yet he sits a few feet away from me in a hotel room raving about his favorite guitar and his love of storytelling. Of course I am talking about the movie Deliverance, which was Ronnie’s big break, his musical ability helped get the part, in turn that role got him many more, a very large body of work that now allows him to do what he really wants to do: tell stories.

Ronnie’s dad was a guitar player in New Mexico. And music was obviously a big part of growing up for the Cox family. Recalling fond memories of calling square dances at age 11, playing rock and roll in Ronnie’s Rockets in his teens. It doesn’t take long to realize this is a musician that got an acting job. A popular notion is when an actor does a music gig, is that it’s the other way around, and unfortunately the public has been burned by most efforts (apologies to William Shatner). Make no mistake, in this case the music came first.

Ronnie’s main guitar is a stunning hand-made drednought by Dave Bertoncini; “The BEST Red Spruce and Brazilian rosewood!”, he beamed as he handed over the guitar. Hmm very light! Stunning koa and abalone binding and inlays all over. The mahogany neck is slim and Taylor-esque, and bears the signs of play… a lot of play. The groove in the top tells the same story, not abuse, just good honest wear. Obviously proud of his baby, Ronnie says he lets other people play it, and you can tell, he really wants to share the experience of playing the Bertoncini. I found it very balanced with perfect bass, and effortless playability, ’bout as good as it gets!

If you are like me, you will be shocked to learn that Deliverance is 40 years old, timed with this anniversary is Ronnie’s book on the making of the movie Dueling Banjos: The Deliverance of Drew is written in “as spoken” storyteller fashion. It’s a great read that sets the story straight about the making of the landmark movie. You can tell from talking to Ronnie that it’s been a wild ride. It’s almost as if his whole life was aimed at this moment; after all if you are going to be a story teller you gotta have a story. 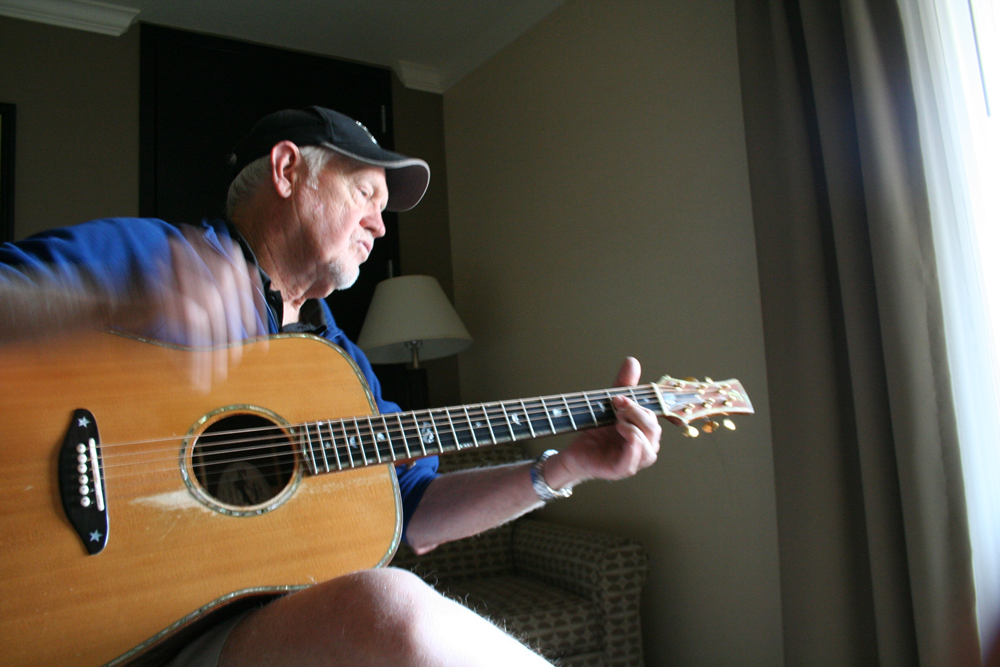 The Guitarist at the Center of American Music: James Burton: The Early Years, 1956-1969