Editor’s Note: Bucky Pizzarelli passed away at the age of 94, on April 1, 2020. He played guitar with and for everyone, going back 75 years. He was in Benny Goodman’s band, he played in the Tonight Show band when it was still in New York, a mainstay in the city’s small rooms through the ‘70s and ‘80s, playing in duet with George Barnes, his own trio and, later, his son (and namesake) John. He was a session guitarist who played on so many records he had to be reminded of them, even if it was a #1 hit like Del Shannon’s “Runaway” (John told Teri Gross an abbreviated version of that story on Fresh Air). And he was a great guy, funny, warm and generous. He will be missed.

Please enjoy this short story from our archives. It originally appeared in Issue 31 (Fall 2013) of the Fretboard Journal. 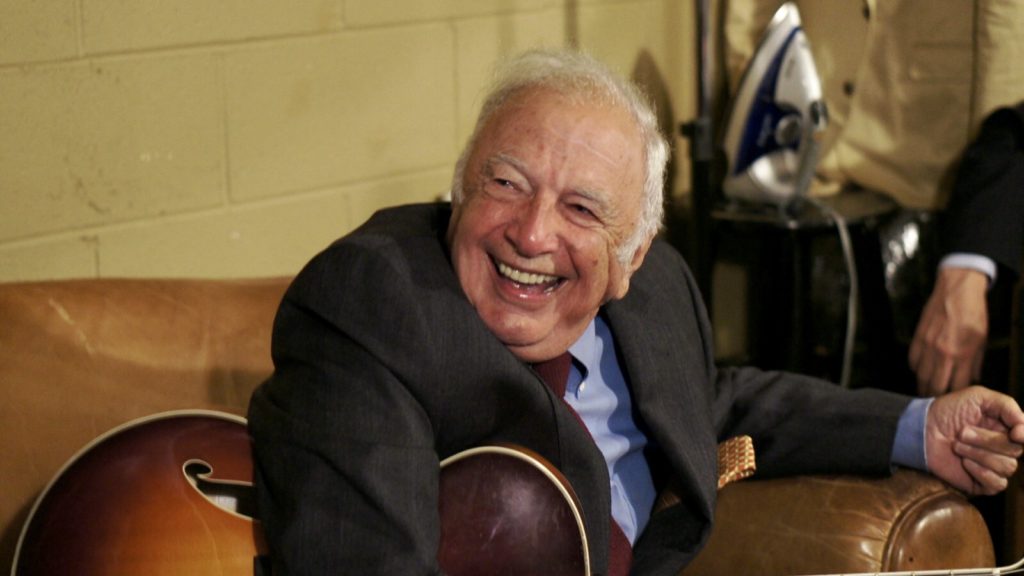 Bucky Pizzarelli has been playing guitar for more than 70 years. He’s very good. Google him. Go ahead, he won’t feel a thing. 443,000 results [updated 4/7/202]. A very respectable total, but he’s probably done more gigs and recording sessions than that. He’s played on some of the greatest records ever made, with some of the greatest musicians who’ve ever played. It goes without saying that if he starts talking to you about playing the guitar, you shut up and listen.

Which is what I did over the course of a long weekend in August, when Bucky joined his son John (subject of a profile in FJ #22) and his quartet for a three-night stand in Seattle.

As everyone knows, wisdom is best imparted at the end of the day, when the work is done. The imparting is all the better if you’re lugging gear, and still more so if the lugging is uphill. Such were the circumstances when Bucky brought class to order after two sets on Friday night, walking to his hotel, as I carried his guitar in its road-worn Calton case, the handle all sticky with duct tape.

BUCKY (ASTONISHED): Why not?

BUCKY (CONCERNED): You got a fake book?

BUCKY (WITH AUTHORITY): So you learn ten songs everyone wants to hear and you go play ’em.

He made it sound so simple; who was I to object? But I’ve got several fake books, each containing hundreds of songs. Frankly, between choosing 10 songs and learning 10 songs, the choosing might be the harder task. So I returned to the source Saturday night and asked the question: Which 10 songs?

In hindsight, I realize that what I was looking for was a jazz guitarist’s version of The List. Everyone knows The List, right? The 100 songs that Johnny Cash decreed Country Canon for his daughter, Rosanne? Sure, I was working on a smaller scale, but that was the gist.

I know. That’s only five. I was puzzled, but I figured you gotta learn five before you can learn ten… and then he added “Stompin’ at The Savoy” (Edgar Sampson) to make it six.

It’s still quite a list, even if it doesn’t approach the breadth of The Man in Black’s 100. It makes perfect sense without being obvious or predictable. Standards, of course, drawn from the Great American Songbook, but beyond as well, and not necessarily associated with guitar players. “Body and Soul” is usually fodder for singers and tenor sax players. “Stompin’ at the Savoy” and “Rose Room” are classic Benny Goodman (as it happens, one of Bucky’s employers). “Sweet Georgia Brown” is, well, “Sweet Georgia Brown.”

When I considered it further, though, I realized that Django played a killer “Sweet Georgia Brown,” and the definitive version of “Rose Room” features Charlie Christian, soon after he joined Benny Goodman’s band, blowin’ a stellar solo. Bucky’s recorded them all, of course, and played them thousands of times (if not tens of thousands). All in all, you can’t argue against anything on that list, even if you could argue for some songs that are missing. Where’s “Nuages?” Or “Autumn Leaves?” What about “Four on Six” or “Seven Comes Eleven?” What kind of Bucky List doesn’t have “Honeysuckle Rose” on it?

I turned to John for backup, and he proceeded to force “Honeysuckle Rose” onto his father’s list, making it seven (and then gave me another ten of his own).

So on Day 3 I grabbed my fake book and started shedding “Honeysuckle Rose.” It’s harder than it looks. The melody came easy, but… After struggling for a while, I gave myself a break and spent a little time playing a song I know well — “Over the Rainbow” — to feel better about myself. That could have been fortuitous. When I found myself backstage with Bucky before that night’s show, as I picked up his guitar to make room for myself on the couch he hit me again.

I was just this side of terrified, but I did it. I fumbled around his crazy (but beautiful) Benedetto 7-string for a moment or two, trying to get acclimated before starting the song I’d been playing just an hour earlier. Then I drew a complete blank three bars in. Naturally, Bucky saved me.

BUCKY: What key are you in?

And he was right.

I played it through to the end from there, and Bucky seemed to enjoy it, pleased that I had played the melody. As it happens, he was responsible for that, too. I reminded him that the one bit of advice he’d given me the last time he was in town was, “Swing the melody.”

We made some more small talk and joked as John and the rest of the quartet (his brother Martin on bass, Larry Fuller on piano, and Tony Tedesco on drums) came in, and I got one more quick lesson as I stepped away…

BUCKY (TO JOHN): Have you heard him play? He’s good; he plays the melody!

ME: John showed me a great chord that saved my arrangement of “Some Other Time.”

BUCKY (CHUCKLING): Next time I’m in town, I’ll show you some better chords. 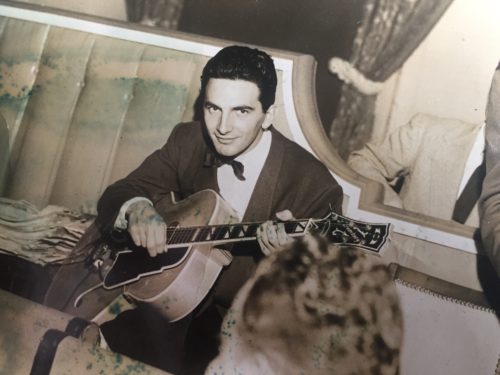 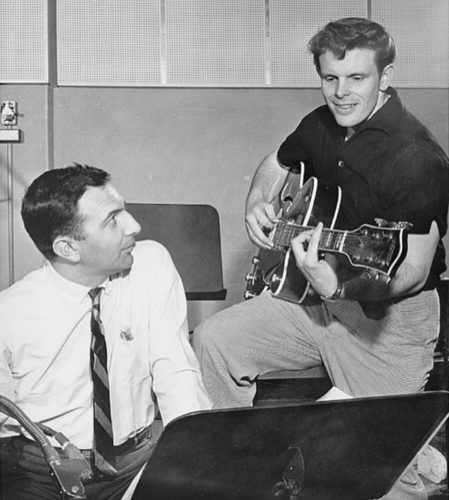 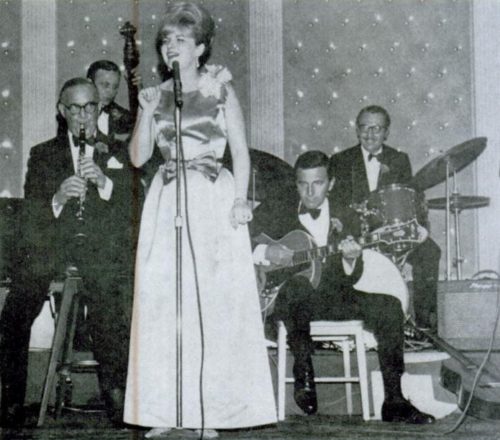 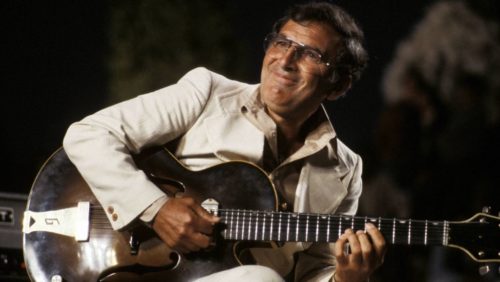 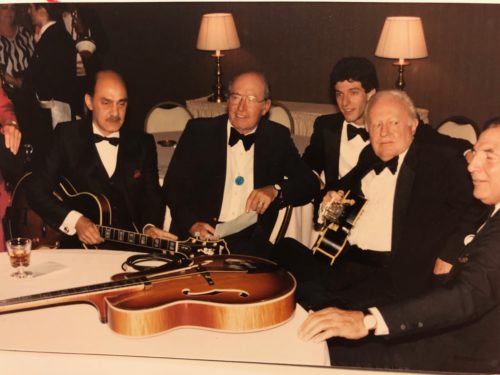