Six years ago, my wife, Mel, and I moved to the foothills of the northern Indian Himalayas with our two young sons. Mel and I had grown up in good families, with access to all the opportunity we could have hoped for, and we shared a vision from before we were married of somehow connecting others less fortunate than we were with the kind of resources we’d always taken for granted. I suppose lots of us feel this sort of tension about our resources, this tug on the heartstrings, but it can be hard to know what to do about it.

The exact set of opportunities and coincidences that led us to India would make a long story, but it’s sufficient to say that in the end, proximity played a part, and our choice to insert ourselves into a marginalized community. That one choice became the most pivotal course of action we have ever taken: we moved to a rural town with little access to clean water, frequent and lengthy power outages, stable employment, and, of course, there was lots of poverty.

Poverty isn’t just about what you have—it’s also about where you come from determining the opportunities for your future. Those who don’t come from privilege, especially minorities and refugees, struggle with lack of hope and purpose.

Early on, I spent a lot of time in a rehab center for young Tibetan refugees, and many of them had the same story: “I dropped out of school in the 6th grade because what’s the point? I don’t have a future no matter how hard I try.” 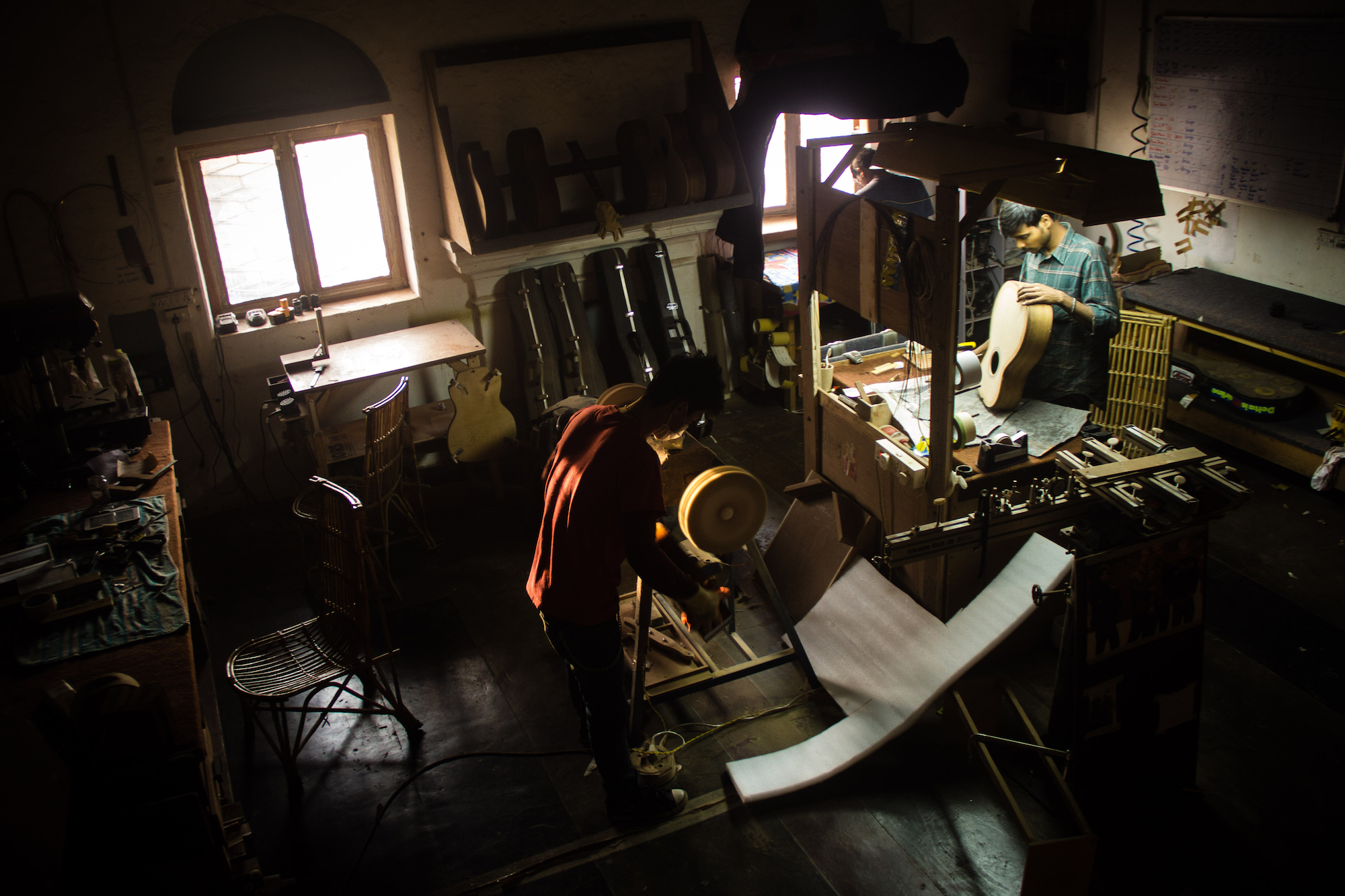 Several of these men were really excited about music, so I started teaching guitar to Tenzing Tsewang and Tenzing Phuntsok and a few others. When the Tenzings found out I had studied guitar-building, they asked me to help them learn to build, too. We started on the dining room table with a few chisels, a scraper—just basic hand tools. I had learned to build in a proper shop, with beautiful machines and jigs, but this was different. This was hard. But we worked through it together, and as we built, we became fast friends.

We took pictures of that first instrument as we went along and posted them online. By the time we had finished that one, it had been sold and we had 10 more orders waiting. So we kept building. We rented an old, dilapidated storefront and renovated it together. We raised some funds, and I took out what was left of my 401K so we could buy a room full of woodworking tools. It may sound like a sacrifice to some, but it wasn’t at all—it was a privilege. It was an adventure.

We had fun, learned a ton, were forced to innovate. Every day was a new challenge, and during that first year we climbed a steep learning curve together. Over the years, our customers have given us the opportunity to build what I feel are some very special instruments, and we continue to progress and innovate and discover new ideas. 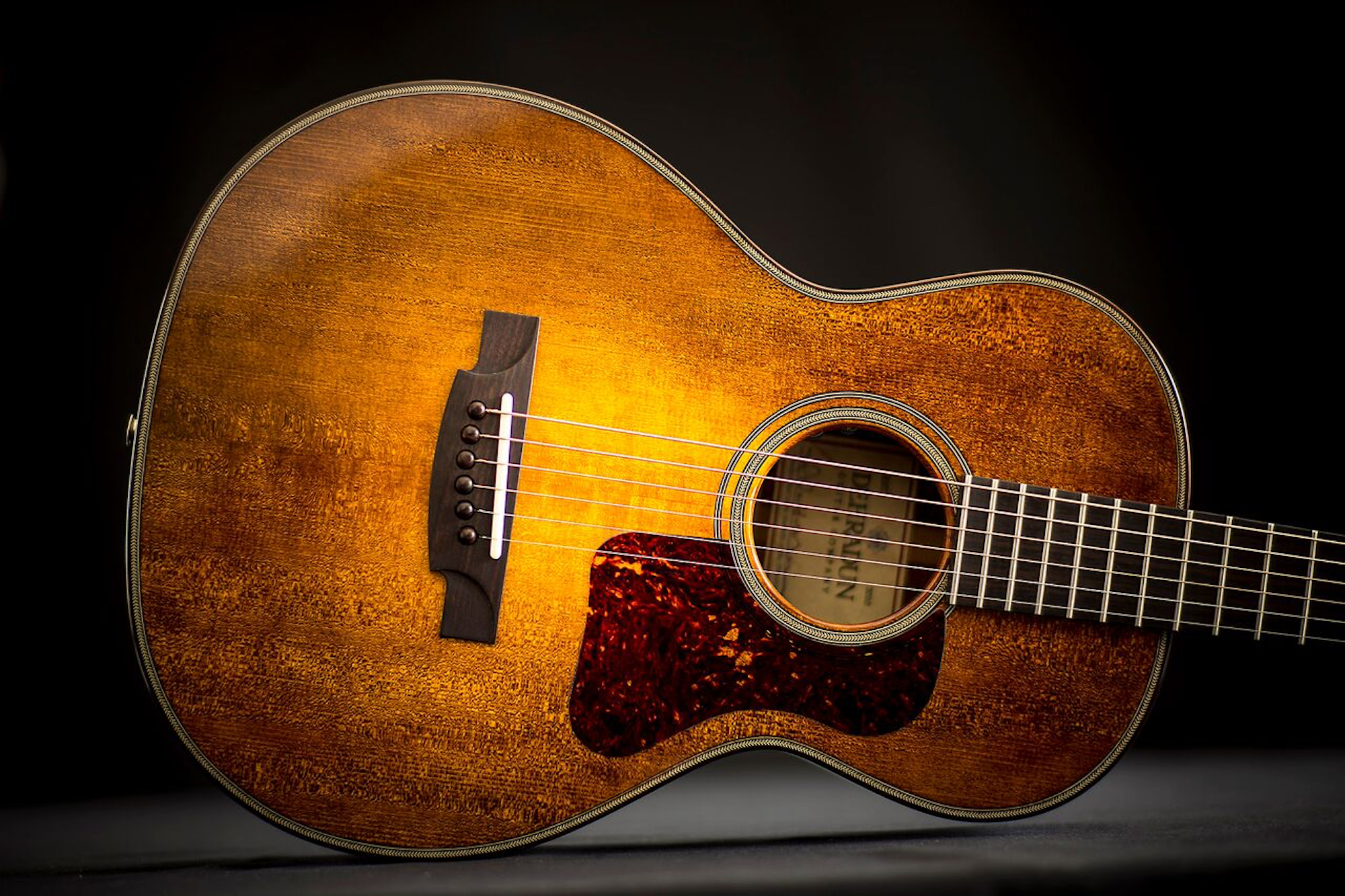 Since those early days, we’ve added another dozen men to the roster, and one of my biggest discoveries along the way has been that you always get more than you give. If you know Richard Hoover, you’ve heard him say that. It’s true. My wife and I could never have anticipated what a blessing our new friends would be to us; between the guitar company and a handbag company Mel started, we have about 100 full-time employees now, and although the people we ended up hiring had so few resources, they have given us so much. We may have given them jobs, but they gave us a new vision for life and a community unlike anything we had ever known: They were in our home for coffee in the morning and for dinner after work. They taught us how to cook Indian food, how to navigate the local markets, how to speak their language. They kept my motorcycle running and our house water supply full.

They became aunties and uncles to my kids, and read to them at bedtime. There was no way I could repay them, but they didn’t care: All they wanted in return was to be friends. And they were—and are—very, very good friends.

You always get more than you give. When we as an industry embrace this principle, we become a source for great products and a force for creating good in the world.

This principle is largely responsible for building the industry in which so many of us have found purpose; some in our midst stood on the shoulders of giants and now choose to hoist others like me up alongside them. I owe a debt of gratitude to Richard Hoover, Harry Fleishman, Kevin Ryan, Jim Olson and many others for all their help and advice along the way.

We also made a second discovery. In our community, there was immense capability, talent, intelligence and energy—transformational power, lying dormant, waiting to be unlocked. The men in my shop grew up with struggles most of us couldn’t imagine, and never had access to the kind of resources and opportunities we take for granted. When they were finally plugged in, the result was nothing short of spectacular.

When a community is starting almost at zero, you can bring in fairly limited resources and still have a nearly infinite impact.

I wasn’t sure whether, or how, to attempt to apply our story to the larger lutherie community here in the United States. But I was reading a James Michener book the other day and came across this passage that really stuck out. Michener is telling about one of the early white explorers of America, a man by the name of Thomas Applegarth. He was a pioneer ecologist who spent months searching for the source of the Susquehanna River, which finishes its journey in concert with the sea, forming the mighty Chesapeake Bay between Virginia and Maryland. Thomas was an inventive discoverer, searching for the forces that formed this new world. I think we woodworkers also like to fashion ourselves as pioneers of a sort: Some of us could probably imagine happily plodding along in the late 1700s alongside this guy. Michener goes on:

There is no need to remember the name Thomas Applegarth….He was merely one of a thousand Americans of his time who were trying to fathom the significance of things: the explorers, the machinists, the agriculturalists, the boatbuilders, the men and women who were starting universities, the newspaper editors, the ministers. They had one thing in common: somewhere, somehow, they had learned to read, and the demands of frontier life had encouraged them to think. From this yeasty combination would spring all the developments that would make America great, all the inventions and the radical new ways of doing things and the germinal ideas which would remake the world.

(Of course, this encouragement of creativity never applied to blacks. They were seldom allowed to read, or pursue mathematics, or discharge their inventive skills. The social loss incurred by our nation because of this arbitrary deprivation would be incalculable).

I think it’s possible for the lutherie community, with its history of collaboration and open doors, to make a concerted effort to open a few more of those doors to young minorities so they may have access to mentoring and opportunity in the industry. I’m not saying anyone has actively kept anyone out, but I figure many of us could do better: If we connect a community with resources and opportunity—a community that has been previously deprived of those very things—who knows what new ideas, energy and innovation could be unlocked? 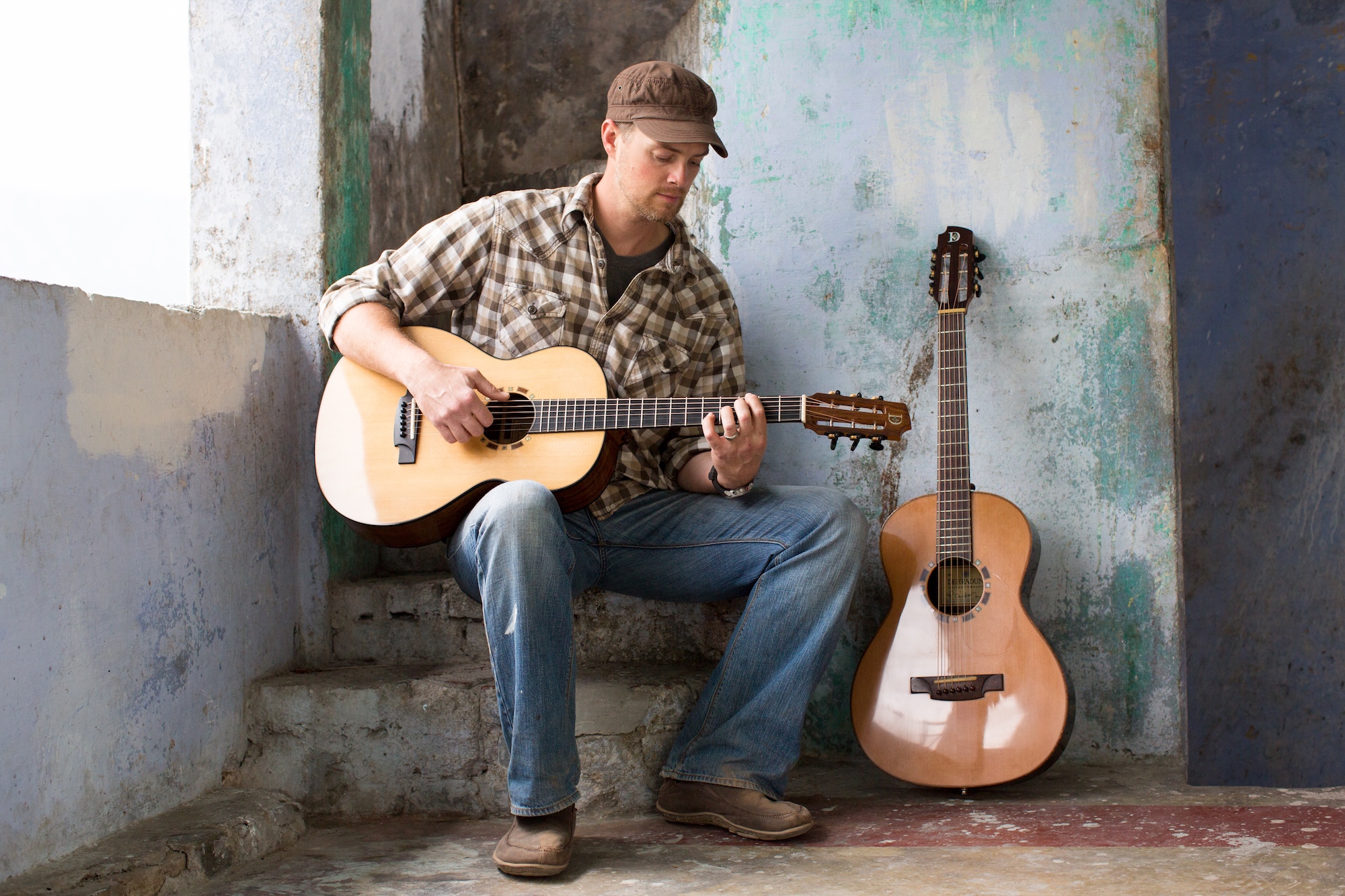 When people ask me how they can get involved, or how they could do something similar, of course my first suggestion is that they order a Dehradun so I can keep employing these men! But then here’s what I suggest: Reach out to one person who has not had access to the same opportunities you grew up with. Make a pathway for them into your workplace or into your life, no matter how small the first step is. Be willing to meet with them to mentor them. You may be surprised when you find out that you’ll always get more than you give.

It has been an exciting ride. We started out thinking that we were going to bring something special to the people of Dehradun. Instead, we found that they brought something much more valuable to us —deep friendship—and that it is not our own innovation, or the West’s, that is most needed to address the issues of poverty. The poor are their own solution—they only need access: to dignifying work, to markets, to the kind of basic resources the rest of us grew up with. 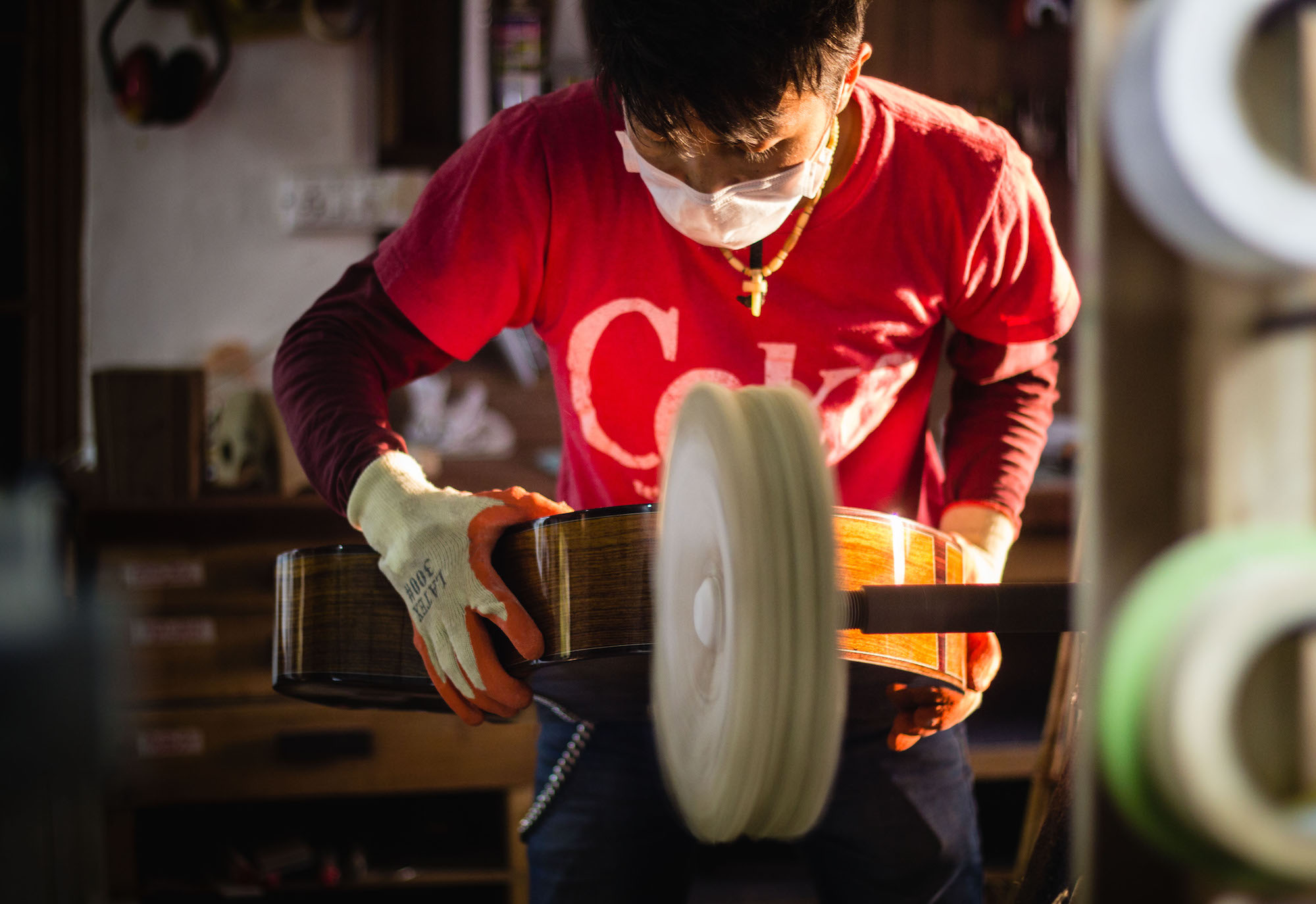 We figured it would take about five years to really get something going, but after five years we were ready to stay another 10. However, due to circumstances beyond our control, we had to suddenly leave our home in India and return to the States.

It was devastating. We couldn’t see how the work could continue on without us,but we were wrong. Our leaders rose up to make big decisions when previously they would have deferred to us. They didn’t need us—in fact, they needed us to leave so they could keep growing! We’ve had to change some things: Up until last summer, we had never built the same design twice; now we’re in a season where without me alongside them, it’s time to connect with a few dealerships. The men continue to build, and they keep getting better. I’m so proud of their work. More than being great builders, they are my closest friends, and I hope to be able to return to them someday soon.

In the meantime, we’re heading over next month to the Myanmar-Thailand border. We’ve been asked to come see what it might look like to support local, social entrepreneurs working to end human trafficking there. Like most impoverished communities, they mainly need jobs. Dehradun is still our first priority, but if we can’t get back into India for now, I hear there’s some really great tonewood in Myanmar…

Highwater’s Rising: An interview with the Helen Highwater Stringband 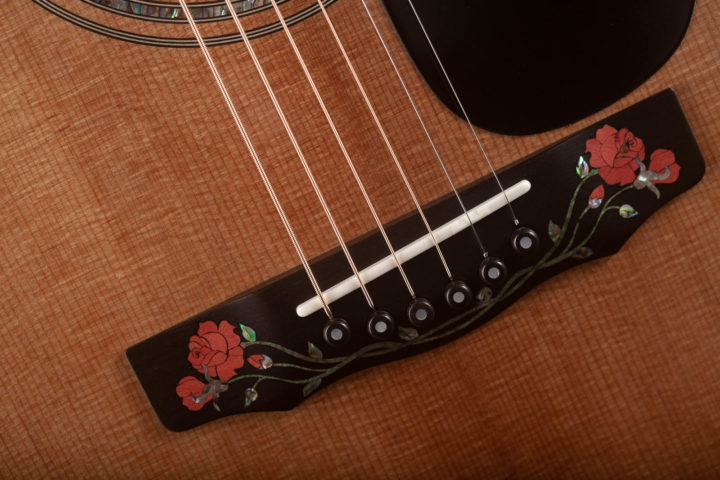