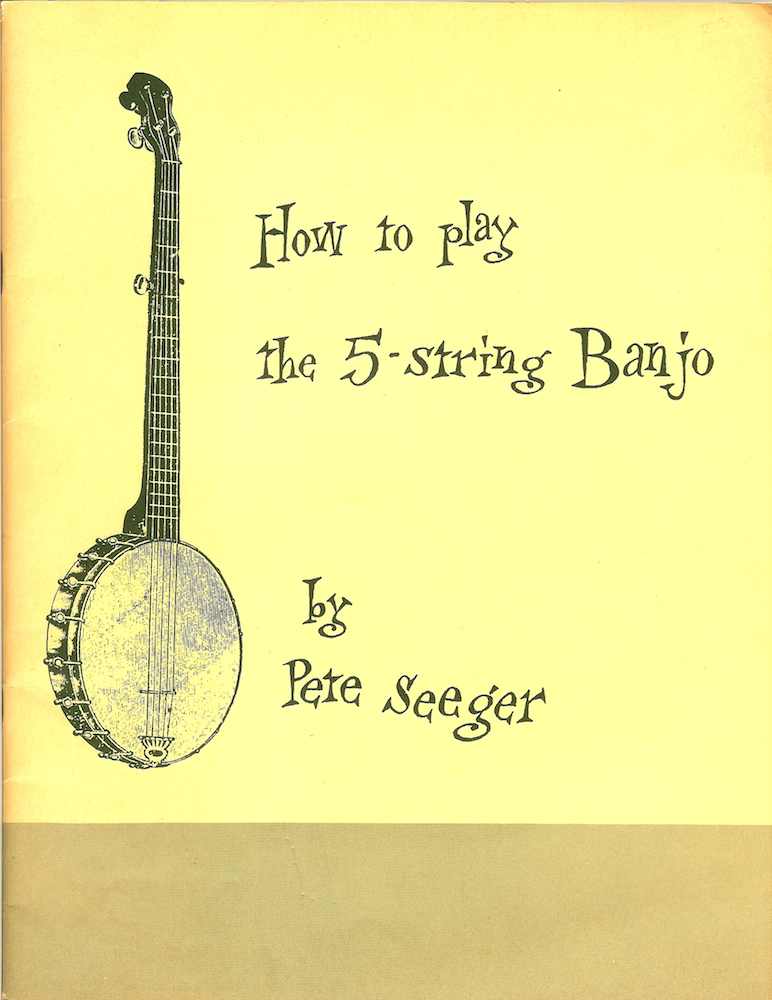 “Have you ever seen my banjo book?”

It’s a simple question for banjo players of at least three generations. If Pete Seeger’s How to Play the 5-String Banjo isn’t the banjo picker’s bible, it’s something close to it: an ur-text that launched a thousand flying–or perhaps, fumbling–fingers.

“My father, Charles, the old musicologist,” remembers Seeger, “was the one who said, ‘Peter, have you ever thought of writing a banjo instruction book? You have a perspective on banjos which most people don’t have.’”

In the 1940s, Seeger did have a unique perspective on the instrument. He was, in fact, one of the few artists in the public eye making the banjo ring. Ever since hearing Samantha Bumgarner frailing on a five-string at the 1936 Mountain Dance and Folk Festival in Asheville, North Carolina, Seeger had become an avid student of the banjo, soaking up its history, its styles and the peculiarities of players like Pete Steele, Rufus Crisp, Bascom Lamar Lunsford and Uncle Dave Macon.

When Seeger self-published the first edition in 1948, it was a compendium of information, with tidbits about the instrument’s evolution from “a possum hide stretched across a gourd” to its contemporary incarnation; advice on tuning and tablature; and a selection of picking patterns and samples of folk songs (including the tune that inspired Seeger’s first longneck, “Viva La Quince Brigada”).

“It was 41 pages and it sold for $1.59,” Seeger says, “and I sold 100 copies in four years.” In the burnished manner of a man with an oft-told tale, he continues. “Then I ran off the mimeograph stencils again–or rather, somebody ran them off for me. I printed 500 copies, and they sold within four years. Then I got ambitious and I rewrote the book a bit and I rented an IBM typewriter and printed it by photolithography and ran off 2,000 copies, and that sold in four years. That was ’54, I think.

By the time it expanded to 72 pages, Seeger’s book had already been massively influential, with revisions covering trends like the pioneering three-finger, bluegrass wail of Earl Scruggs (which, according to Neil V. Rosenberg’s Bluegrass: A History, Seeger first heard around 1950) and the similar but less aggressive style of Ralph Stanley and his forward rolls. Seeger’s half-brother, Mike, is credited in the book with “assistance in preparing this [bluegrass] chapter,” but the younger Seeger, 76, humbly says that his contribution was essentially one night’s work.

“[Pete’s son] Danny and Pete and I met once, and Pete went over a little of what he perceived of [Scruggs’ style], and Danny and I kibitzed. That’s about it. I didn’t really do very much. He was very generous in mentioning me.”

Considering some of the detailed works to come in the wake of Seeger’s primer, it’s easy to scoff at elements of it today, but in its day, the slim, witty pamphlet was revolutionary (and not only for its inclusion of a helpful note on “When Not to Play the Banjo”). Yes, he kicks off his “manual for beginners” in C tuning; he plows through chords before getting down to single-string work; and he starts students on the banjo path with the up picking of “A Basic Strum.”

(In his book When We Were Good: The Folk Revival, music historian Robert Cantwell notes how Seeger distilled the famous “Basic Strum” from elements he’d learned from the rough-hewn Rufus Crisp. “By nestling a resonant chord between two precise notes,” Cantwell wrote, “a melody note and a chiming note on the fifth string, Seeger gentrified the more percussive frailing style, with its vigorous hammering of the forearm and its percussive rapping of the fingernail on the banjo head.”)

In later printings, Seeger admits these minor inadequacies, although they didn’t prevent bright-eyed boys like Béla Fleck, Bill Keith, Tony Trischka and Seeger family friend Guy Davis from finding their calling within its pages. Eric Weissberg actually took part in the development of the book; Seeger, who needed to refine his ideas, took on a group of young students in his MacDougal Street apartment–including Weissberg, who was only 8 at the time–teaching them chords and licks as a way to codify the lessons.

“He was trying things out,” Weissberg, now 70, says, “because he realized he’d never taught anybody how to play the banjo.”

For many aspiring pickers coming of age in the 1950s and ‘60s, Pete Seeger was the banjo, largely thanks to the book. “Its effect has been enormous,” Mike Seeger says, “not only because of the number of issues that were made, but because of the breadth of its subject matter. It was a vision that was far ahead of its time. It’s just an amazing thing that he did, and it evolved as he learned more over the 15-year period that he revised it. It’s a remarkable book.”

Weissberg concurs. “It was the only thing like it at the time, as far as I know,” he says. “Before that, most of the knowledge was handed down from person to person, and not much of that was happening up in the North. That was mostly a down-South thing, so as far as the urban development of banjo players, it was vital.”

A condensed version of the book appeared within the sleeve of the 1954 Folkways LP The Five-String Banjo Instructor with Pete Seeger, a recording that, like the book, has long been supplanted by an entire shelf of hot-shot instruction manuals with attached CDs. But it was Seeger’s book–which coined the terms “hammering on” and “pulling off,” among others, in its landmark pages–that returned the instrument to American music.

“I’m very proud of it,” Seeger says today. “I would be quite satisfied if no one knew who I was except that they bought that book. Because of How to Play the 5-String Banjo, I know I’m old Grandpa to not just hundreds of people, but thousands of people all over the country.”

The Battleship: A Look at Pete Seeger’s booming “12-stringer” guitar