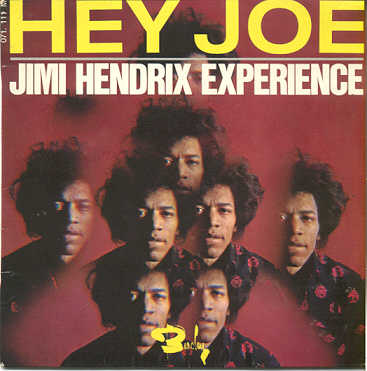 In 1966 Jimi Hendrix scored his first hit with a song called “Hey Joe,” a dark and disturbing moan about a man who murdered his lover because she was fooling around with another guy. “Hey Joe” tells an old tale and Hendrix’s raw take conjures up some ancient demons but most people are surprised to discover that even though the song sounds like an old murder ballad in reality it was was only a decade old when he recorded it. On today’s Song of the Week we’ll take a look at how a song composed in the mid 1950s by an obscure folksinger became an iconic anthem and a staple of bar bands the world over.

The story of “Hey Joe” begins with a song called “Baby, Please Don’t Go To Town,” which was composed by Niela Miller, a singer-songwriter who was part of the urban folk revival of the late 1950s and early 1960s. She lived in New York and achieved some modest success when Dave Van Ronk covered her song “Mean World Blues.” Sometime around 1955 she wrote “Baby, Please Don’t Go To Town,” a mournful song about the joys and perils a young woman faced in the city. Her boyfriend at the time, Billy Roberts, was also a singer and he took a liking to her song and wrote some new words for it. The new lyrics told the story of a man named Joe who murdered his lover.  For decades, it was believed that no recordings existed of Niela Miller singing “Baby, Please Don’t Go To Town” until an acetate demo recorded in 1962 turned up. The badly warped record included “Baby, Please Don’t Go To Town,” along with nine other songs, and while the melody wasn’t exactly the same as “Hey Joe,” I think it’s close enough to prove that it’s was the source for Roberts’ version.  Happily, The Numero Group label released Niela Miller’s demo a couple of years ago so you can listen for yourself.

Billy Roberts never recorded “Hey Joe” himself but he played it at all of his gigs and by the mid-60s it was appearing in the sets of quite a few bands. He also copyrighted the song in 1962, which turned out to be a good thing. In 1965 The Leaves were the first group to record the song and over the next few months their rather frenetic take on “Hey Joe” seemed to inspire versions by The Surfaris, The Standells, Love and even The Byrds.  On many of these records “Hey Joe” was credited to Dino Valenti, who was a talented songwriter (he wrote the famous paean to peace and love “Let’s Get Together”) so it’s something of mystery why he claimed the song as his own. Perhaps Valenti thought “Hey Joe” was a traditional ballad and up for grabs?

Tim Rose “Hey Joe (You Shot Your Woman Down)”

In 1966 the singer Tim Rose released his version of the song, which he called “Hey Joe (You Shot Your Woman Down).” Rose played it at a slow, menacing tempo that really highlighted the anger at the core of the song. Rose was a regular performer at the Café Wha? during the mid-1960s and it was at this famous Greenwich Village club that Jimi Hendrix most likely first heard the slower version of “Hey Joe.” Rose always claimed that “Hey Joe” was a traditional song and that he first heard it when he was in Florida. In the last few years, scholars have searched through various archives of folk music and so far no one has turned up a version of “Hey Joe” that predates the song that Niela Miller and Billy Roberts wrote.  In 1997 Rose released a new version of the song which he called “Blue Steel .44.”

In late 1966 Jimi Hendrix released a single of “Hey Joe,” which was followed a few weeks later by the LP Are You Experienced? This is the version that in now regarded as the definitive version of the song. (Billy Roberts is credited as the composer on this record.) Billy Robert’s version started with the line “Hey Joe, where you going with that money in your hand,’ and then goes into a little call and response about going to the store to buy a gun. (In Rose’s later version, a blue steel .44.) But Hendrix, and the 1965 Leaves version, starts the song with the gun in Joe’s hand, a masterful stroke of editing  that places us right in the middle of the action. Jimi Hendrix gives a harrowing performance of “Hey Joe”and one that is worthy of its fame.

At some point or other every guitarist takes a crack at “Hey Joe.”  This version by Roy Buchanan is very nice as is this acoustic version by Martin Sexton. But even if you put four masters of the guitar on stage, all of them at the top of their game, I think even Joe, Joe, Steve and Brian would agree that Jimi did it best.

For more information on “Hey Joe,” go to Hey Joe Versions, which includes a list of over 1700 versions of the song and a copy of Billy Roberts’s original copyright lead sheet.

Some writers have claimed that Carl Smith’s 1953 hit “Hey Joe” was an influence in some way on the later song, but I have to say I’m just not hearing it. Still, you gotta love Carl’s red Super 400 with the twin pickguards.

After a Half Century Hiatus, Sonny West Completes Songs for Buddy Holly