An alphabetical listing of instructors in the FJ community offering lessons via Skype, Patreon, etc.

Updated May 6th: two new Masterclasses with Julian Lage; Guthrie Trapp is offering a “play along” version of his latest release and a 20% discount on lessons through the end of June. Links and details below.

Grant is offering Skype lessons (contact him via his Facebook page) and has just released his first record with his electric trio, Interpreter, available for purchase via Bandcamp.

Despite its awkward name, Guitar Mastery Intensive is an impressive program, and they’re adding to their roster. We just learned that Jeff Parker has signed up, joining folks like Molly Miller, Adam Levy and Steve Cardenas, among others.

Proud to recently join the online faculty at GUITAR MASTERY INTENSIVE, along with @moodymill, @stringjuggler, @guitartipspro, and a whole lot of other fine guitarists. Interested? Check out www.guitarmasteryintensive.com for more info.

You might know Jan from his transcriptions of some of Bill Frisell’s performances here at the Fretboard Journal. He’s also shared this transcription after hearing of Bucky Pizzarelli’s passing, April 1. Jan has also published a new eBook, Studies for electric guitar: Tone – Technique – Theory, and is donating all proceeds to the CDC Foundation and the Seattle Foundation Covid-19 Response Fund.

Bucky Pizzarelli January 9, 1926 – April 1, 2020. Difficult to imagine how much he contributed to our music community. A couple of months ago I was asked to play this tune for a gig so I transcribed his take of ‘I Wish You Love’ with Rosemary Clooney: how to accompany a singer. Let‘s keep his legacy going. • 1. 'Tone – Technique – Theory’ (40+ pages PDF for $5) is finally out 2. All proceeds during April go in equal parts to the CDC foundation and the Seattle Foundation Covid-19 Response Fund – there are links in the bio if you consider to donate directly 🙏 3. Music provides you with this needed and healthy serenity? Please find free sheet music from chordyoga‘s catalogue via the link in the bio. Quite varied, from neo soul, contemp. rap to Bill Frisell and George Harrison's slide moves.

Sadly, Julian’s Skype lessons via guitar.study are fully booked, but he’s already opened up the calendar once, so he might make more slots available in the future. He’s also done one Town Hall-style master class and has just announced two more, on May 9th and 16th via Crowdcast. Keep an eye on his Instagram and Facebook for updates…

UPDATE!! All available lessons have been scheduled at this time. Thank you all for such an amazing response! — In the spirit of continue creative endeavors, we are thrilled to announce Julian will be offering Skype lessons for a limited time. Please visit www.guitar.study to book a lesson today. Link in bio!

Adam has been providing online instruction via Guitar Tips Pro, a Patreon offering, for a while now, and is working on a “virtual jams” offering for his Patreon supporters. He also offers instruction via Truefire and, as mentioned above, Guitar Mastery Intensive.

Nick has a new “Guitar Workouts” program for his students:

One way I’m adapting to this new work style is to make “Guitar workout” vids for my students. I’ve been meaning to do this for years! So today I posted ep. 1, which is a really simple finger exercise at 60/80/100bpms. It’s a private link for students only at the moment, but I’m happy to share if you’re interested. . . . #guitarworkouts #guitarlesson #guitarexercise #guitarteacher #education #workoutvideos

Singer-songwriter / bluesman Ian Moore has turned to the Topeka platform to offer private concerts, lessons or just a chat. Contact him here.

Needless to say, it’s not just guitar players feeling the pinch. Open Studio includes instruction from players like Christian McBride, Dianne Reeves and Warren Wolf, not to mention the guitarists Romero Lubambo and Peter Sprague, and they’ve started offering a Choose What You Pay model.

Speaking of not just guitar players…

Guthrie is now offering a “play along” version of his latest release, Life After Dark, and a 20% discount on Slype/Zoom lessons through the end of June.

Howdy music lovers! I think you’ll find this pretty cool. I’m now offering a play-along version of my last record, “Life After Dark” for download. We remixed the record without my guitars so you can jam along to the tracks! MP3 and WAV files available online at store.guthrietrapp.com! Check it out!

Tim’s Late Late Show gig is on hiatus, so he’s filling the gap with online lessons. Tim’s not much for social media, so reach out to him via his partner, Eryn, and have a gander at Tim’s collaboration with Bill Frisell here at the FJ offices.

Longtime FJ reader (and exceptional guitarist) David Ziegele is offering over a dozen free transcriptions of original fingerstyle material along with tunes from Jackson Browne, David Grier and Normal Blake.

No frets, but plenty of fun: Moog is offering their Minimoog Model D app for free right now. If you’ve ever been curious about playing with a synth, it’s a great place to get started.

Roger Bucknall over at Fylde Guitars is compiling a list of online concerts, lessons and other resources, including but not limited to a number of Fylde players, nor even to guitars or music, for that matter.

Johnny Sangster and our friends at Crackle & Pop! have been doing live streaming shows for a while now and are available in Seattle for artists exploring that avenue.

Cancellations have given Tucker Martine at Flora openings for mixing new projects.

Take care of yourselves and each other (from at least 5 feet away). Feel free to DM me or reach out to my management directly jg@globalpositioningservices.net . Also please consider sharing this post if you think you have friends that this might interest. Thanks pals!

Note: This is an ever-evolving list and we will be making additions daily. If we’re missing something cool, drop us a line at festival@fretboardjournal.com. 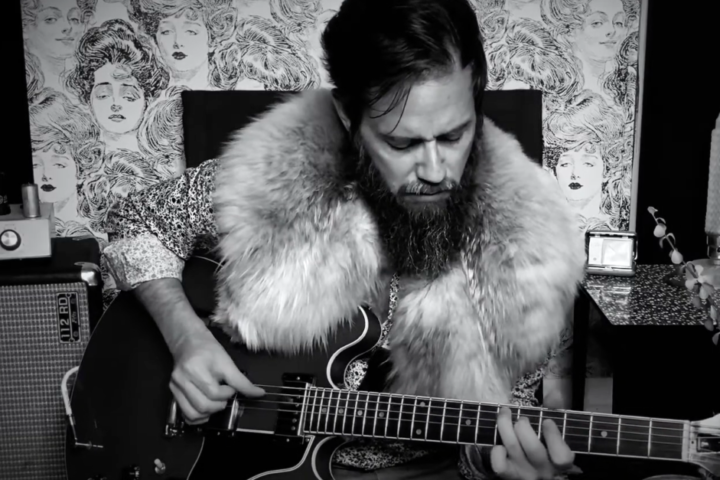