The headstock may say Hawaiian Radio Tone but this guitar is Dobro through and through. Back in the 1930s, with the Great Depression slowing down sales, just about every guitar company made instruments to order for department stores, regional wholesalers or, in the case of this squareneck, music schools. This instrument was ordered from Dobro by an outfit known as the Hawaiian Teachers of Hollywood who were in operation from the early 1920s to sometime in the 1940s. Usually Hawaiian Radio Tone guitars were very cheaply made hollow necks that vaguely resembled Weissenborns but from time to time a much better instrument, such as this Dobro, shows up bearing the company’s name. This guitar looks like it was made in California around 1933, and it closely resembles the Dobro Model 27, which is generally known as the Cyclops for its single soundhole. The Model 27 was a modestly priced guitar and it usually came with a plain finish but this version has the fancy faux rosewood paint job that came on the Model 45.

If you look at the end of the fretboard you can see the remains of a paper overlay that covered guitar’s fretboard. The instruments offered through the Hawaiian Teachers of Hollywood came with a tuning chart glued to the fingerboard to help the student remember the notes they were playing. I guess a previous owner decide they didn’t need the cheat sheet anymore so they peeled off most of it revealing the flush frets underneath. This guitar is in very good structural condition but it’s a little scruffy looking, although I think it has a certain rustic charm. If you ever wondered why guitars have plastic binding, just imagine how nice the edges of this guitar would have looked like with a bit of protection to ward off the blows of life. This Cyclops currently resides at Gryphon Stringed Instruments and they have it priced at at $1695.

Click here for the original listing, which includes a couple of sound clips of the guitar.

The rosewood grain pattern on the back of this guitar was painted on. The actual wood is proabaly birch, which is a very pale wood. 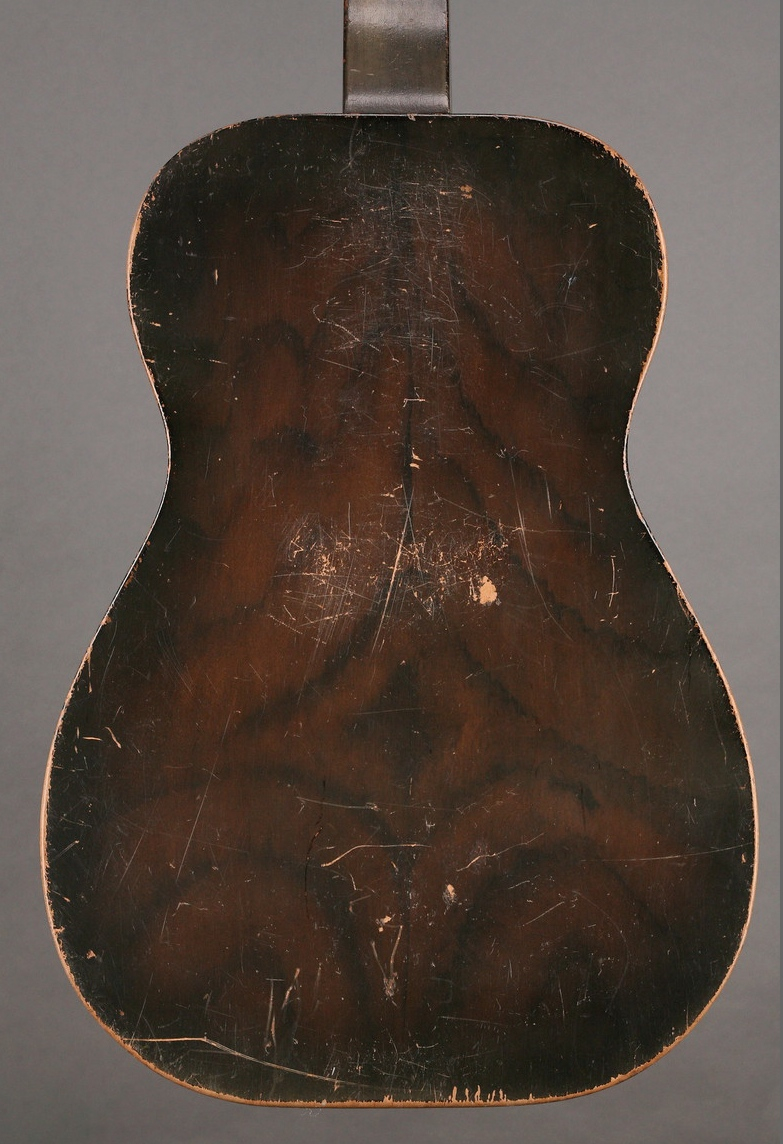 You can just make out the words Hawaiian and Hollywood on this tiny scrap of fretboard overlay. You can also get a good look at the flush frets. 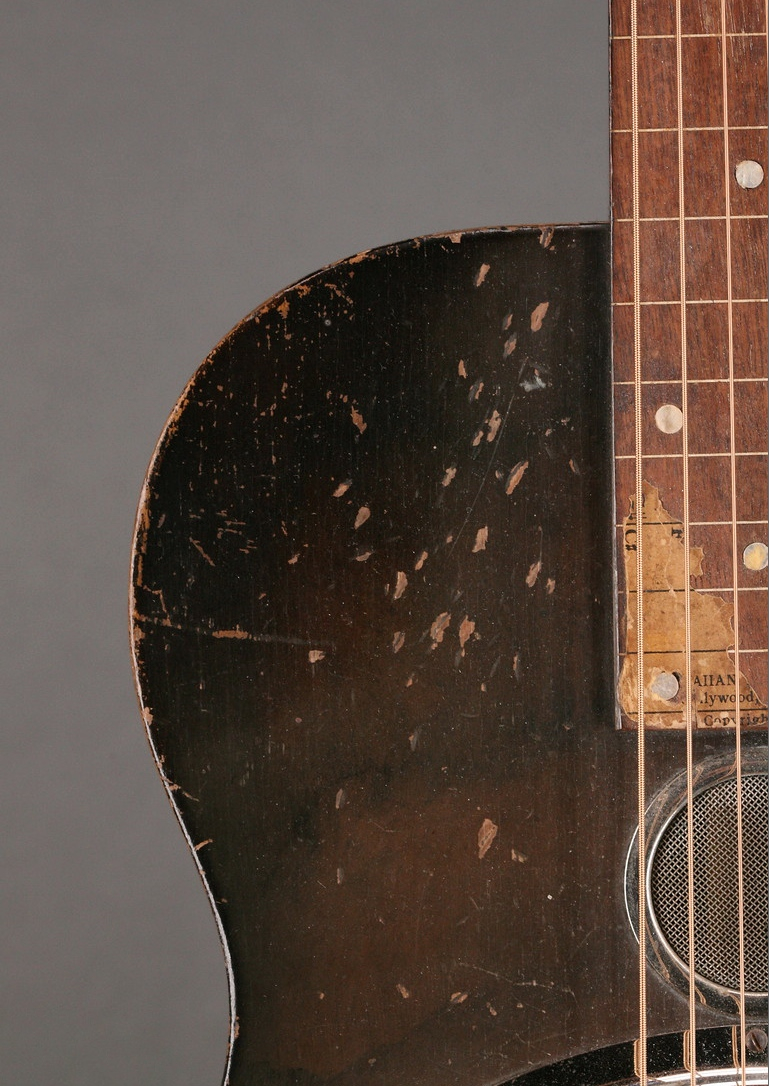 Here’s a portion of an intact paper overlay from another guitar. From this sample we can see that the Hawaiian Teachers of Hollywood taught the A Major Low Bass tuning, a tuning that was popular with some of the earlier Hawaiian guitarists like Sam Ku West, Benny Nawahi and Sol Hoopii. By the end of the 1930s, wooden Dobros were associated with country players rather than Hawaiian guitarists. Country players tended to tune to open G, so I suspect that a Josh Graves acolyte peeled of the paper to keep from getting confused. (I gleaned the tuning info from Slide Rules Andy Volk’s great little book on tunings for lap steel, pedal steel, bottleneck and Hawaiian slide guitar. If you play any of these styles you need this book.) 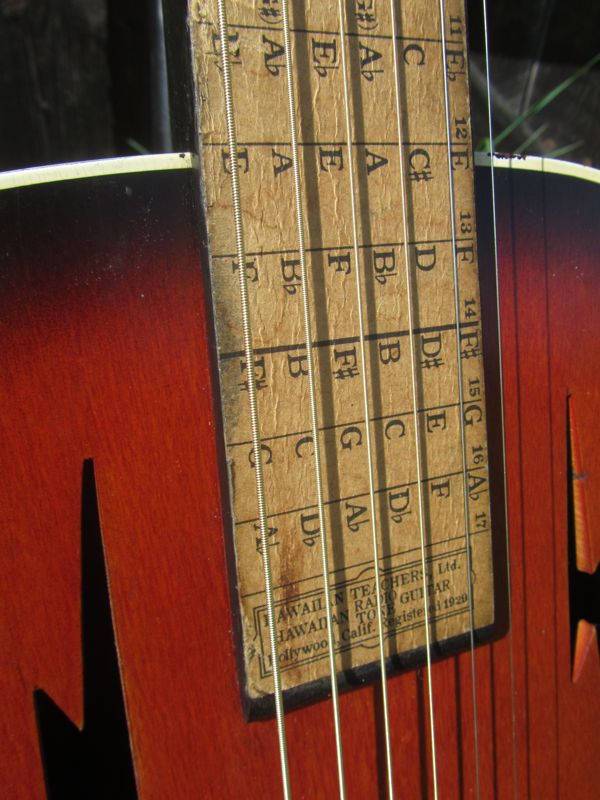 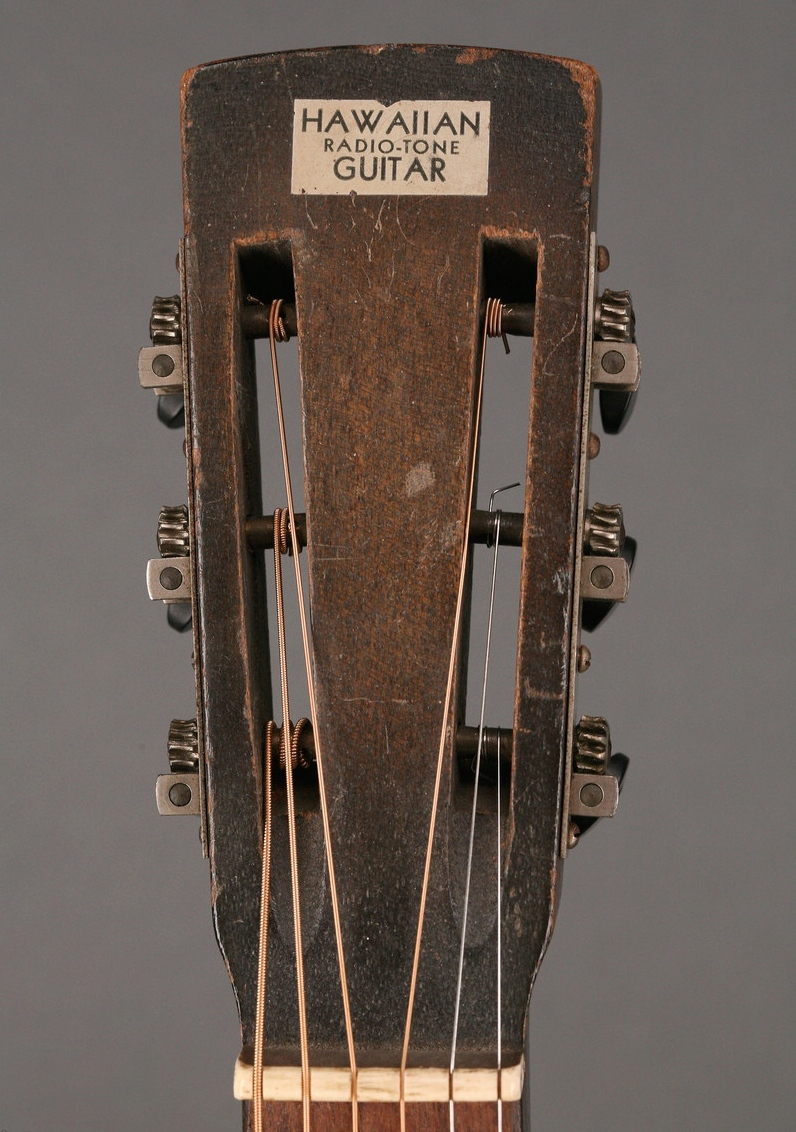