Like a lot of luthiers right now, Oregon’s Raymond Kraut is feverishly trying to wrap up some new creations for this fall’s guitar shows (the Santa Barbara Guitar Show, the Holy Grail Guitar Show and the Woodstock Invitational Luthiers Showcase all take place within about a month of each other). Kraut makes exquisite instruments and is a former apprentice of Ervin Somogyi (read about Somogyi’s Old World apprenticeship program in the Fretboard Journal #36), as well as a Roberto-Venn alum. For this week’s Bench Press, he describes some of the instruments he’ll be unveiling at the shows, the impact Somagyi had on his builds and a lot more.

Raymond Kraut: I’m currently working on a batch of instruments which I will be exhibiting at two shows this year: the Santa Barbara Guitar Show in California and the Holy Grail Guitar Show in Berlin. The batch consists of four 00’s and two OM’s. I don’t typically build this many instruments at once but because of the shows I’ll be attending, I need to make sure I have instruments to show at both of them.

It’s common knowledge these days that it’s risky to try to leave the country with instruments made of Brazilian rosewood, so when I travel to Berlin I won’t be able to bring with me the client guitars I’m making for Santa Barbara, three of which are Brazilian instruments. These two shows are back-to-back, so I need to make special instruments that won’t cause problems when traveling internationally. These restrictions can be positive as they allow for more of a creative process and a way for a broader audience to hear what can be done from alternative wood selections. For Berlin, I’ll be bringing a European maple OM, a mahogany 00, and a Black and White ebony 00. These guitars will be on display at the Santa Barbara show along with two Brazilian rosewood 00s and a Brazilian rosewood OM.

All of the guitars have European spruce for the soundboards. It’s what I use most often as it has a great stiffness-to-weight ratio, which is ideal for the tone I like. It also has an aesthetic that works nicely with my contemporary style. 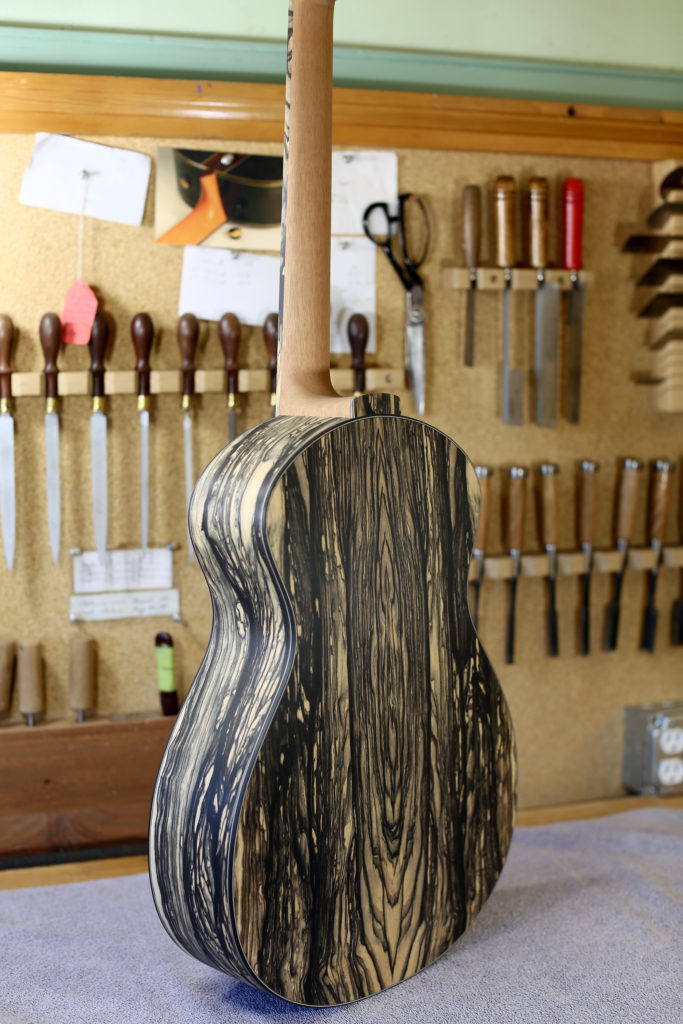 FJ: I’d love to hear more about this ebony. It’s wild. Where does it come from? What do you think of the tone will be like?

RK: It’s called Black and White ebony (diospyros malabar) and it comes from Laos. Larry Davis, a good friend who owns Gallery Hardwoods in my local Eugene area, is known for supplying luthier-grade woods and stabilized woods, which are commonly found in rosettes, at least in mine. Last year, I got a phone call from Larry and he told me he has found some really amazing ebony, the sort of which I had seen before. Naturally, I was all ears! That day, I decided to run down to his shop to take a look and I was totally surprised with what he had. Ebony is very dense and typically a bit heavy. Contrary to this general knowledge, I found this Black and White variety to be rather lightweight, more like what we get from rosewood, and it sings. I’m always in search of lightweight wood with a good musicality and this ebony really fit the bill. Not only that, it’s incredibly beautiful and vibrant. 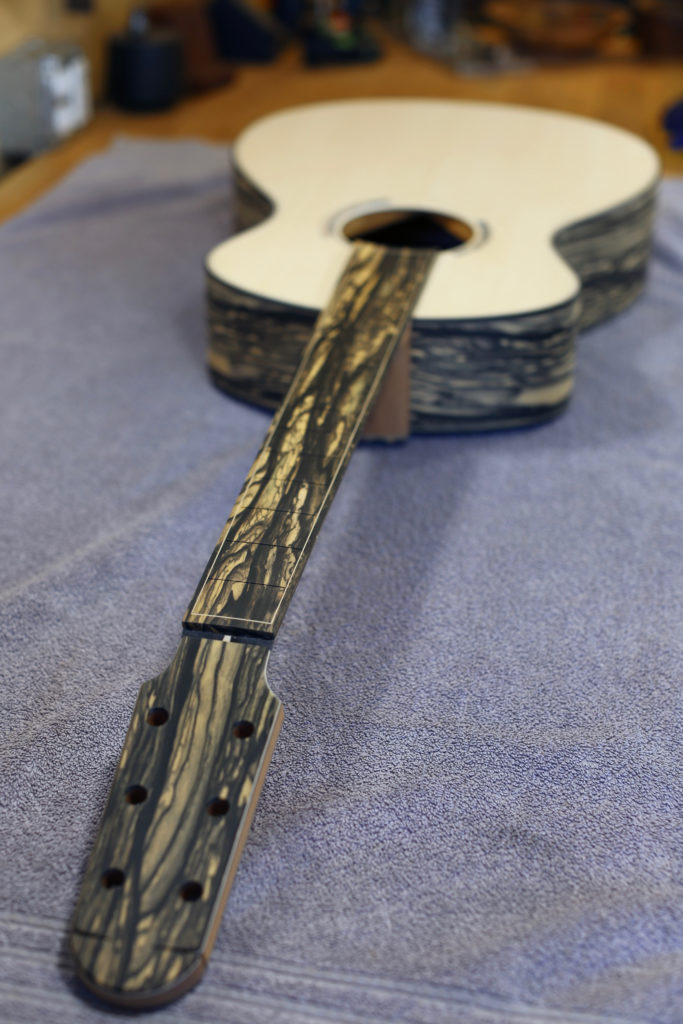 I’m using this ebony not just for the back and sides of the instrument but all over. The headstock veneers, fretboard and bridge will all be made out of this extraordinary wood. Aside from that, I was also able to procure some burl from the same tree to use in the rosette. It’s incredibly striking and very responsive tonally. It’s going to be hard to miss at the shows this year.

FJ: We’ve seen pictures of your new shop. Can you describe it?

RK: My new shop is located in the former Lorane Elementary School just outside of Eugene, Oregon. About five years ago, the school closed down due to a shrinkage in the population and bussed the rest of the students to an alternative school nearby. Recently, the school was acquired by a private individual who has a goal of revitalizing the community and giving space to artists and crafts people like myself.

I have 1,000 square feet of space, which is an ideal size for my work. There’s an abundance of natural light and, quite frankly, good views of the Lorane Valley, which is helpful when looking at details in wood. Other than the space I use for my guitars there are many communal areas which include a full gymnasium, game room, garden and track.

FJ: Has working in Oregon changed your work habits or how you build guitars?

RK: Not really. However, It’s invigorating to be in a collaborative space, where other people care about their craft as much as I love lutherie. There’s a great vibe which is important for everyday work and I’m always excited to get there.

FJ: We have a story on Ervin Somogyi’s apprenticeship program in the latest FJ. Can you shed a little light on how your own builds evolved pre- and post-apprenticeship?

RK: During the apprenticeship, Ervin teaches us how to build his instruments but also how to think creatively. He allowed us more room to experiment than he was allowed, as an established luthier. He taught the broad, foundational concepts of art and inspiration, in addition to the typical structural, engineering and design specifics of construction. This is why you see all of his apprentices do things rather differently from one another yet you can always see the Somogyi influence.

From a design aspect, I’m continuously evolving. Ervin taught me a lot about how to identify the things I liked about design. It’s easy to say you like the looks of something but it can be difficult to explain why. My understanding of why I like something is always growing and therefore has opened a lot of possibility for new creative design.

Construction-wise, I really pushed to make a lighter weight, responsive guitar, even lighter than Somogyi’s, for many reasons. If a player stands or sits, the weight of a heavy guitar can begin to wear on them –  and who wants to cart a heavy guitar through the airport? So [I focus on] certain things, like a removable dovetail neck system which allows for a smaller head block or lightweight interior laminates on the sides of the guitar. It really helped to reduce the weight.

There are so many more details that I obsess about. I make my fretboards on a CNC machine so I can obtain a stiffer board/neck by carving the fret channels to have the same radial curve as the top of the fingerboard. I strive for the best in every aspect of an instrument, from tuners handmade by Nicolo Alessi to excellent Hoffee cases, both of which are standard features at my base price. I know that in the future, I’ll never look back to any instrument I’ve sold and think, “I could have done better.”

I love that each of the former Somogyi apprentices are all evolving in their own ways, producing truly unique instruments in their own styles. My ongoing goal is to produce the best tone and the most responsive instrument. I embellish each guitar with custom design elements, usually in consultation with the client. So, every Kraut guitar goes through the same process and meets the same standards of quality, but each one also has its own unique design aspects, a bit of artistry specific to that particular instrument.

FJ: Your rosettes are certainly unique. How have they evolved over the years?

RK: I love creating individual designs that I believe are the perfect fit for each instrument. I don’t mind the extra work that goes into each guitar. It’s very personal, too – each design captures the ever-changing inspirations in my life, at that moment. I’m proud of every guitar I’ve built. People come to me and ask me to build beautiful sounding and visual instruments, and I try to include elements from their lives as well.

FJ: Of all the guitars you’ve built, what was the hardest to part ways with?

RK: Well that’s interesting to me as they’re all rather hard to part with. I spend so much time creating each one of these guitars that I have a bond with each them. Sounds weird, right? By the time I’m ready to ship the guitar, I always get a little sad. Each one is unique in its aesthetic nature so they all feel very personal and one-of-a-kind to me.

That said, the ones I’m most sad about not having are the eight instruments I built under my own name during my apprenticeship with Ervin. I’m slowly finding them and trying to buy them back, but that’s proving difficult as the current owners have their own attachments. One day, I hope to have them all.