For this week’s Bench Press, we talk to amplifier guru Tim Marcus of Milkman Sound, who has been building guitar and pedal steel amplifiers inspired by the classics for about five years. His amp offerings range from low-powered tube amps to behemoths with all the headroom a pedal steel player would ever desire. And they have found their way onto the backlines of some of the finest players in the business. 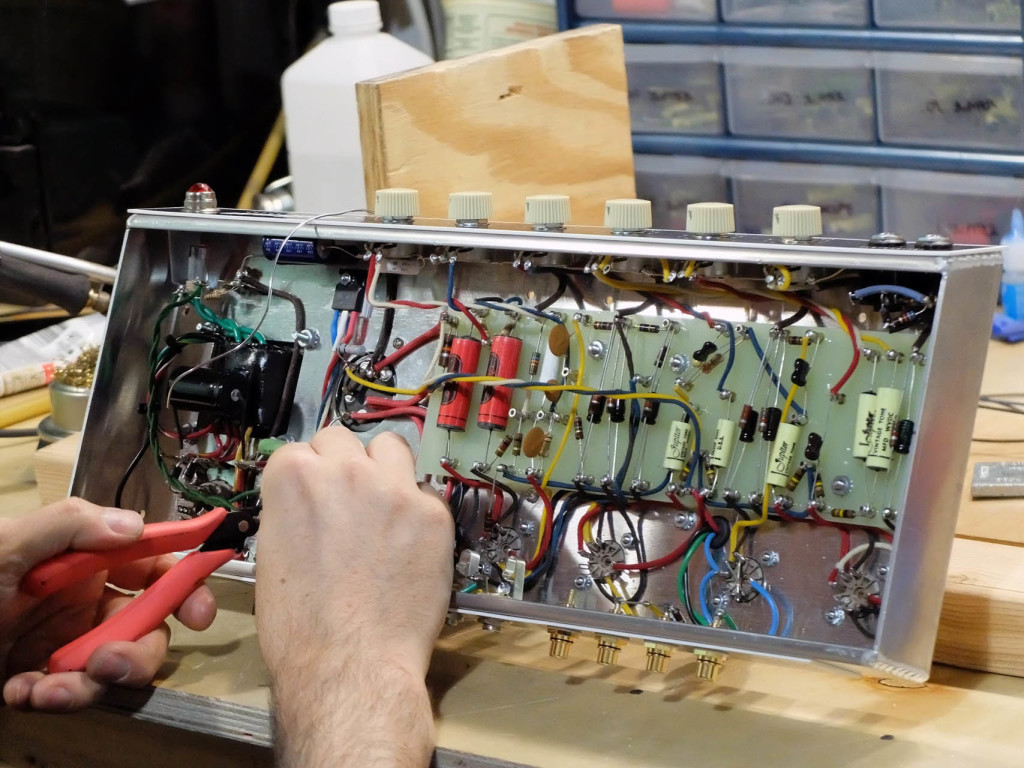 Fretboard Journal: What’s on your bench at the moment?

Tim Marcus: I just finished a major custom project: an 85-watt bass head. The customer bought a small Bergantino cabinet and I wanted the amp head to fit perfectly on top. I had him take some measurements and decided I could squish down my regular bass head in order to make it fit. Custom work like that is a lot of fun – I usually build the same amp models over and over, so they are not on the bench very long. This bass amp required a lot of custom work and took me a few days of measuring and hand drilling. Once everything was mounted it came together fast and ended up being pretty great.

FJ: Can you tell us about the materials and construction techniques you’re using for the amplifiers you’re currently building?

TM: I tend to prefer housing my amplifiers in a pine cabinet. I have tried a few different materials, and always come back to pine. Not only is it the lightest option, but it really does add something special to the sound of the amplifier. It’s difficult to explain – you just need to hear it. Something about pine wrapped in tweed or tolex says “this is a guitar amp” to me. The smell, the sound, the feel of picking it up and carrying it while the tubes are still cooling down – it’s part of the experience, like smelling cookies in the oven. Pine smells like happy guitar tone. 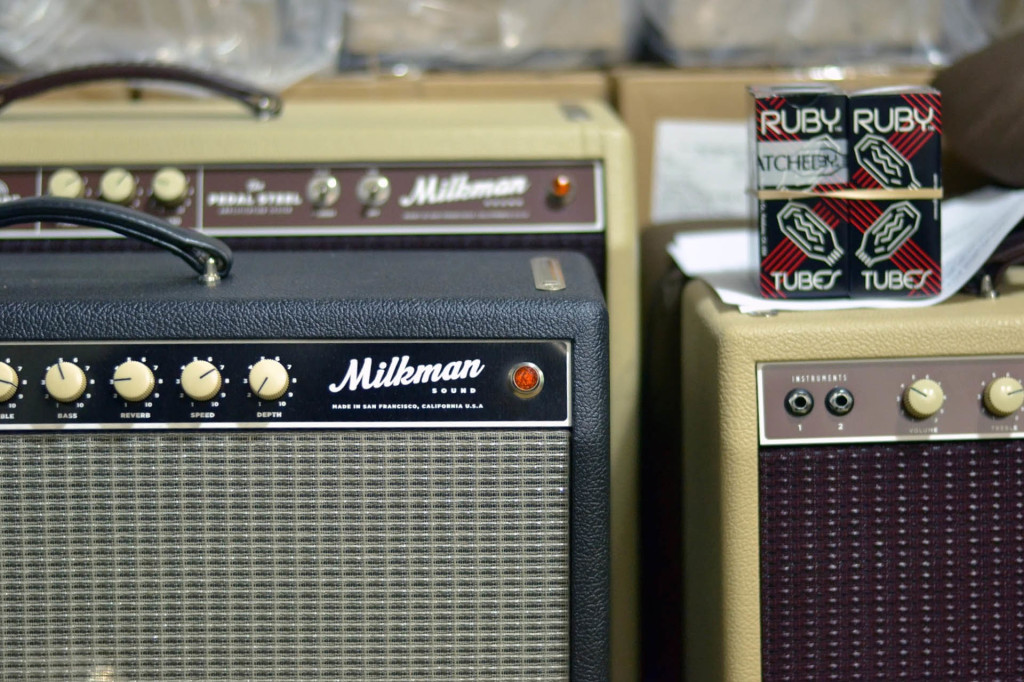 FJ: Do you have general design philosophy?

TM: To keep things as simple and elegant as possible. I like to refine my circuits and layouts to the point where they are so simple that it’s almost a joke. Each time I build an amplifier I refine it more and more. The goal is not to make it easier to build or save money – a simple amp circuit just tends to sound best.

The real secret of guitar amplifiers is grounding and layout. There’s no science or engineering to that part of amplifier design – experimentation and creativity are what will get you there.

FJ: Besides what’s on the bench right now, what other amps are you building?

TM: I typically build all tube-based amplifiers, except for this one thing: I have a 300W Class D hybrid model that is doing very well right now. It’s called the Half and Half: the preamp and reverb circuit are all tube-based, hand-wired onto the turret board, just like all of my other amps, but then it cascades into a little Class D power module that puts out 300 watts all day long with virtually no heat. It’s an amazing little amp because it’s about 28 lbs, loud as the dickens and has a stunning clean tone. You can easily carry this little amp across town, plug straight in, and eat a guy’s lunch who has dislocated his shoulder lugging his Twin to the gig.

FJ: Any specific amps from your past you want to mention?

TM: I have had the pleasure of building amplifiers for a few of my musical heroes. I just sent Jeff Tweedy a custom “Bourbon Burst” Half Pint that was a collaboration with Daniel Tyack from Salvage Custom. Daniel and I also conspired to make a wool-wrapped amplifier for Eric Clapton that had handmade leather corners, amongst other outrageous aesthetics. John Mayer wanted Eric to have a special amp for his birthday and hired me to build it. I have to admit that I was totally flattered that John would ask me to do this – I think we spent about four months going back and forth with ideas on what would be perfect, and he was very happy with the end result. 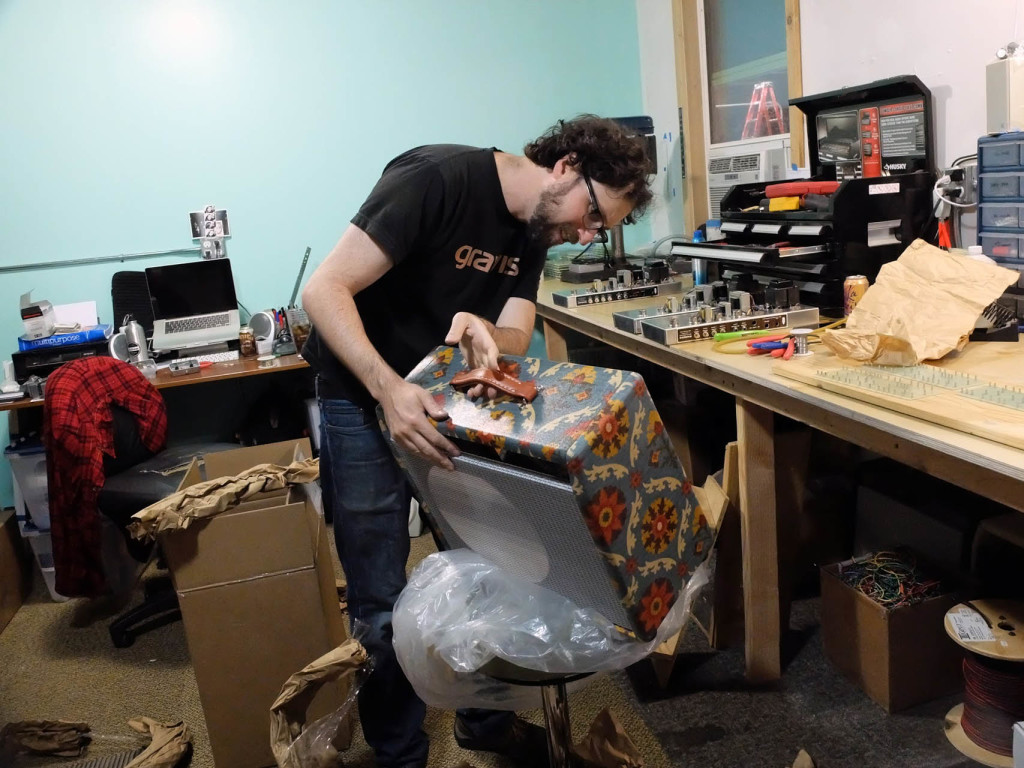 FJ: What’s the story with the Half Pint?

TM: I created the Half Pint for one of my customers who already had my 20W Creamer, but wanted something even smaller for his home. I noticed that there were not many low wattage amplifiers that featured tremolo and reverb on the market, so I decided to go for it. I shrunk everything down in size, but kept using the same quality of materials: Mercury transformers, Jupiter caps and speakers, etc. and somehow fit it all together and it came out awesome! So much fun in a tiny little package.

Now I offer two versions of that amplifier: a mini version [with an 8″ speaker], and a 12″ version that features my power scaling circuit, which makes it a very versatile amplifier for home and studio. You usually see power scaling on amplifiers with very high wattage, but it actually works much better in an amp with low wattage.

TM: I am really excited for my wedding in October! I know it’s not amp-related, or even music-related, but it’s something that will get me out of my little shop for two weeks and into the daylight. I don’t see much daylight anymore.

FJ: Where is your shop located?

TM: My shop is located in the Bayview area of San Francisco. The space is tiny – I think it’s about 18′ x 22′, which leaves just enough room for me to work out from under a pyramid of cabinets and speaker boxes. My workbench is big enough where I can work on one amp at a time. I grew up in a family that owned a restaurant, and worked in the kitchen. My workbench is set up a bit like how a line cook would set up his little area. All of the small parts are within reach, and there’s enough to build maybe 10-12 amps before I need to restock from my larger parts bins. I keep my soldering iron on one side, and my tools on the other, and I listen to podcasts and music all day long. 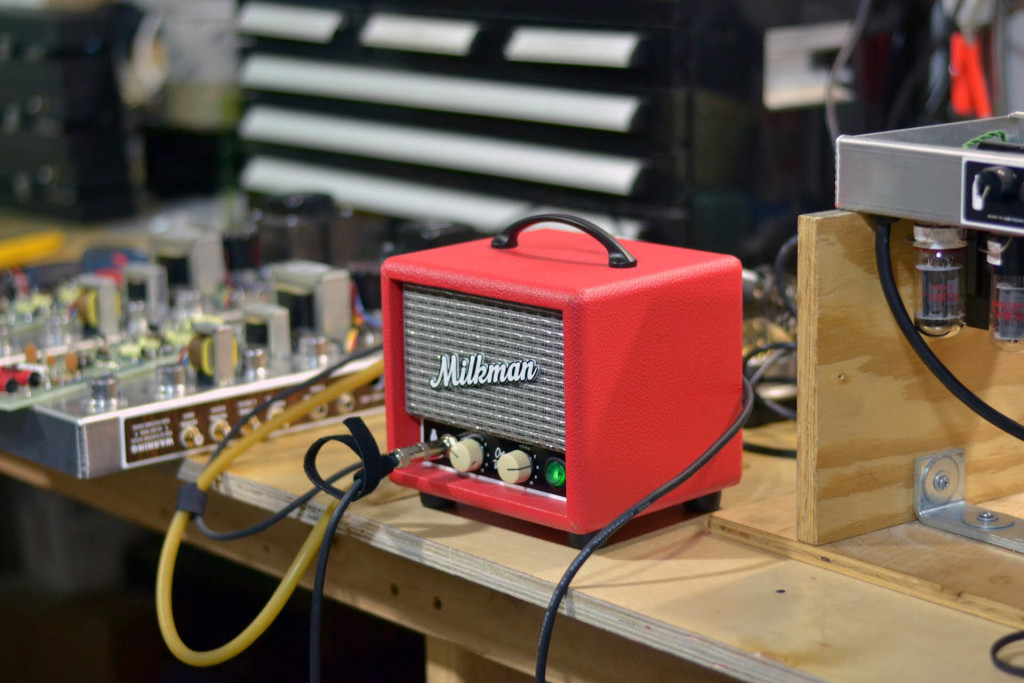 FJ: How’d you get into the amp-building business?

TM: After a lifetime of modifying, tweaking, repairing, etc. I started building my own amplifiers in 2010. I built the first “Milkman” amplifier in January of 2011, during the Super Bowl. It was a nice afternoon where I knew I would not be interrupted. That was the 85W amp, and after it was done I let Greg Leisz borrow it for a recording session he had at Fantasy Studios with Bill Frisell. At that time, I had just built the one amp for myself and had a full-time job. But soon after Greg tried it he ordered one for himself, and started using it all the time. People started to notice and I started taking orders.

2014 was the first year I was working full-time for myself building Milkman amplifiers.

TM: I usually tell people that its about 10-12 weeks, but I fear that there is a big log jam heading my way soon. I like to build the amps one at a time, dote on them and make sure everything is as perfect as can be before I ship, but that can take extra time. I started Milkman because I am a musician and was building my own gear, so of course I need to play guitar or pedal steel out of all of the amps before I send them to their new owners. Sometimes I get carried away and a whole afternoon gets away from me!