Matthew Arcara might not be the first builder featured in the Bench Press who took to lutherie to build the pre-war Martin he couldn’t afford, but he is the first who has won the National Flat Pick Guitar Championship at the legendary Walnut Valley Festival (in 2006, after placing second in 2004). In and of itself, that’s a pretty good reason to get him on the Bench, but above and beyond, he’s making some exceptional guitars, strong in the Martin tradition without being strictly tied to it–he’s perfectly willing to add a soundport to your D-28, should you so desire. Building under the moniker MGA Guitars (for Matthew Grant Arcara) in a shop in Portland, Maine, Matthew’s parlayed his love for the guitar (and, more recently, the banjo) and a familial background in engineering into a career that is the embodiment of form meeting function. 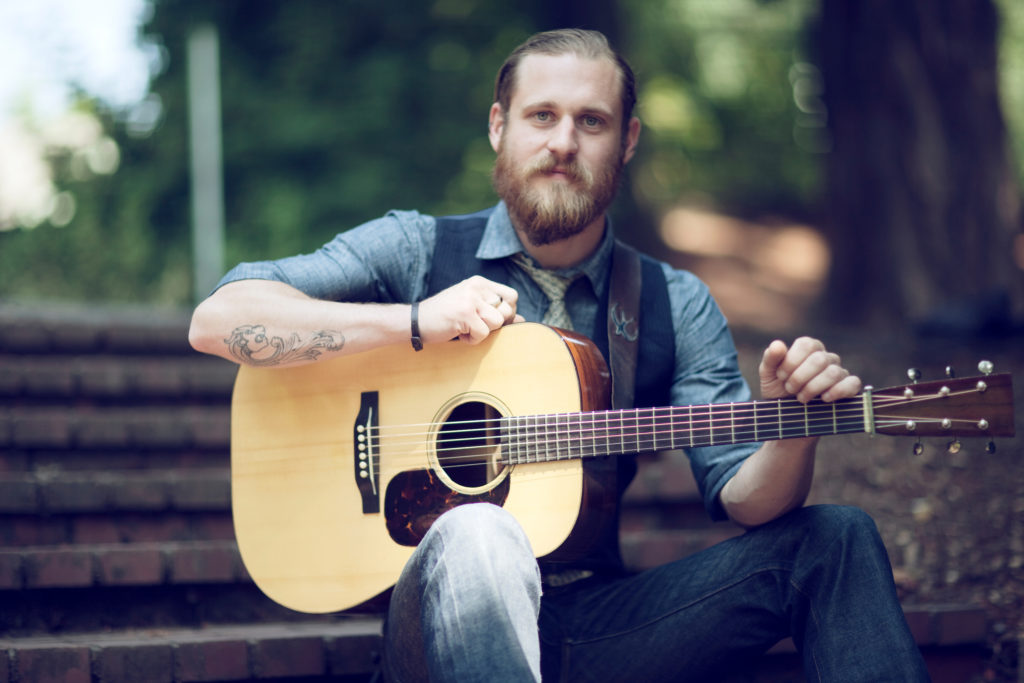 Matthew Arcara: I just moved a batch off of my bench: I finished up three: an OM-28 Brazilian, a 12-fret 000-28 Brazilian and a D-18 with Cuban mahogany. The 28s are very traditional appointment-wise, the only update being a carbon fiber neck support in the OM. The D-18 was built custom for a good friend and great picker, Andy Cambria. It sort of imagines if Martin had built a D in the early ‘30s, so blank peghead, rosewood for binding and also in the rosette center, three dots on the fretboard descending in size at 5, 7, 9 and my favorite part, the back of the peghead brand. That aesthetic is really one of my favorites, it’s so understated and tasteful; the rosewood binding with a red hue against the brown mahogany is a good look in my opinion. 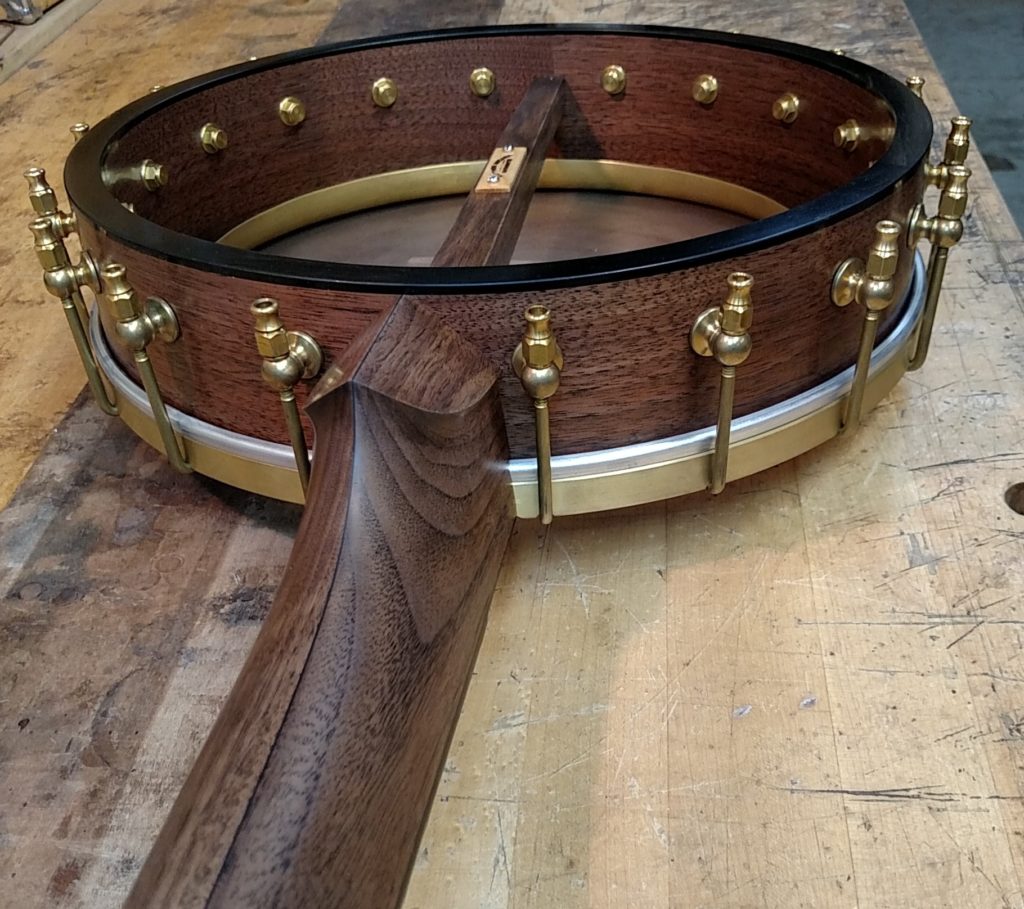 FJ: You’re one of the rare builders creating guitars and banjos; how’d that come about?

MA: They both came about because of need. I started building guitars because I was convinced that it was possible to get something closer in sound to the actual pre-war guitars. I couldn’t afford one so I set out to build it. It was really the same with banjos. I started playing banjo then decided I needed one, so I built it. I went to the great old time music gathering that is Clifftop and got a little bored playing guitar so I picked up an extra banjo at the campsite and spent the week trying to wrestle it into submission. I realized that I really love clawhammer banjo; it’s the perfect middle spot between rhythm guitar and flatpicking. You get to play some melody and improvise but you also get to really have a strong voice in the groove and rhythm behind the fiddler. After that I came home and started building one while talking with Will Fielding and Greg from Buckeye Banjos about banjo building. Once it was done, I traveled with it when I was on the road with Joy Kills Sorrow, so people saw me playing it at jams and whatnot. That turned into people asking if they could order them. I never really set out to be a banjo builder, people just liked them.

MA: The first answer, specifically, is the tone of old Martins, that dry and crackly sound of a great old guitar. The ones that have a D and G string that just cut through all the noise. In a wider sense, I find a lot of inspiration in great design, skilled craftsmanship, balanced proportions, refined mechanical engineering and function. I have a father who is a retired engineer and he really helped instill in me that form and function are not mutually exclusive. The perfect function can also have the most pleasing form and, in fact, should. I find a lot of inspiration in objects that just work well and have minimized functional compromises. It could be a well-tuned motorcycle or mountain bike suspension kinematics, or perhaps the new combinations of rocker and camber in snowboard designs, the use of hydrodynamics with the design of planing hulls for surfboard design. These things inspire me to find the best function of a guitar that I am capable of. I am also lucky to have a large community of craftsmen and craftswomen as friends and that really fuels a love for skilled execution of craft, and just striving to make objects that aspire to refined taste and function. 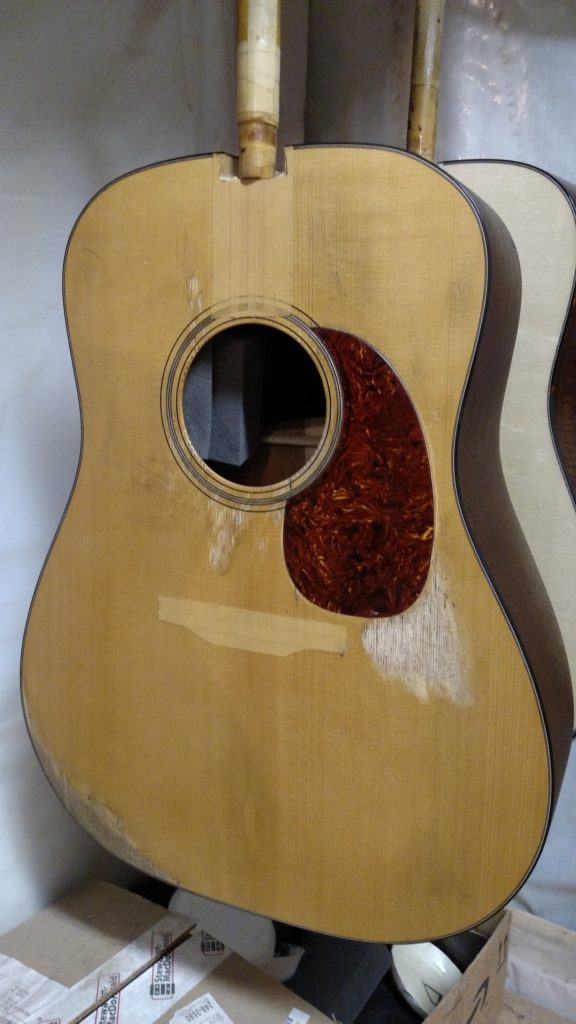 FJ:  Do you have a favorite guitar that’s crossed your bench?

MA: I am lucky to have two of my favorite guitars owned by two good friends. Both, coincidentally, are 1937 D-18s that to me are just the pinnacle of guitar tone: loud but not harsh, dry and woody yet somehow bright and resonant at the same time. I have been trusted to work on both and every time I do, I am re-inspired by the craftspeople that were working for Martin in the ‘30s–Old World craftsmanship at its best, and so pleasing to play.  Those two guitars just help me strive to be a better musician, person and builder.

FJ: Tell us about your shop…

MA: My shop is in South Portland, Maine, just across the bay from my home in Portland. I have been in that space for about six or seven years. We have a really great setup and I share space and tooling with John Slobod of Circa Guitars as well as Joel Eckhaus of Earnest Instruments. It’s great to get to work with other craftsman around; we help each other as needed, act as quality control and a second set of eyes or hands. Plus I think it helps keep us all from getting too isolated working away by ourselves.

MA: As much as the technocrat in me wants everything to be repeatable and measurable, the truth is, wood is not uniform. All trees have different growing seasons, patterns and personalities. We as builders have to embrace these differences and be able to adapt to the individual characteristics of a set of wood. So I guess my philosophy is to try and “see” with my hands and ears and not just my eyes.

Two winters ago I built a prototype 000-18 for myself and constructed it with sides that didn’t match the back at all, and a top that was originally sent to me as a packing top that was protection for a high-end top for a customer. It then sat on my shelf for a few years because it had hard grain lines and some color in it. I could tell it was gonna sound great, because it was stiff and responsive, but I knew a customer wasn’t going to go for it.  So I used it for myself and used a lot of tinted shellac to tame the worst of the visual “imperfections.” I guess the lesson here is don’t judge by the look alone, just ‘cause a set is clean and even doesn’t mean it’s gonna sound great and just because something has perceived imperfections don’t rule it out as not functional. That guitar sounds great in my opinion and has become my full-time player. People are often surprised when I tell them the story behind the top, which presents the perfect opportunity to make the case of craftsmanship over material alone. 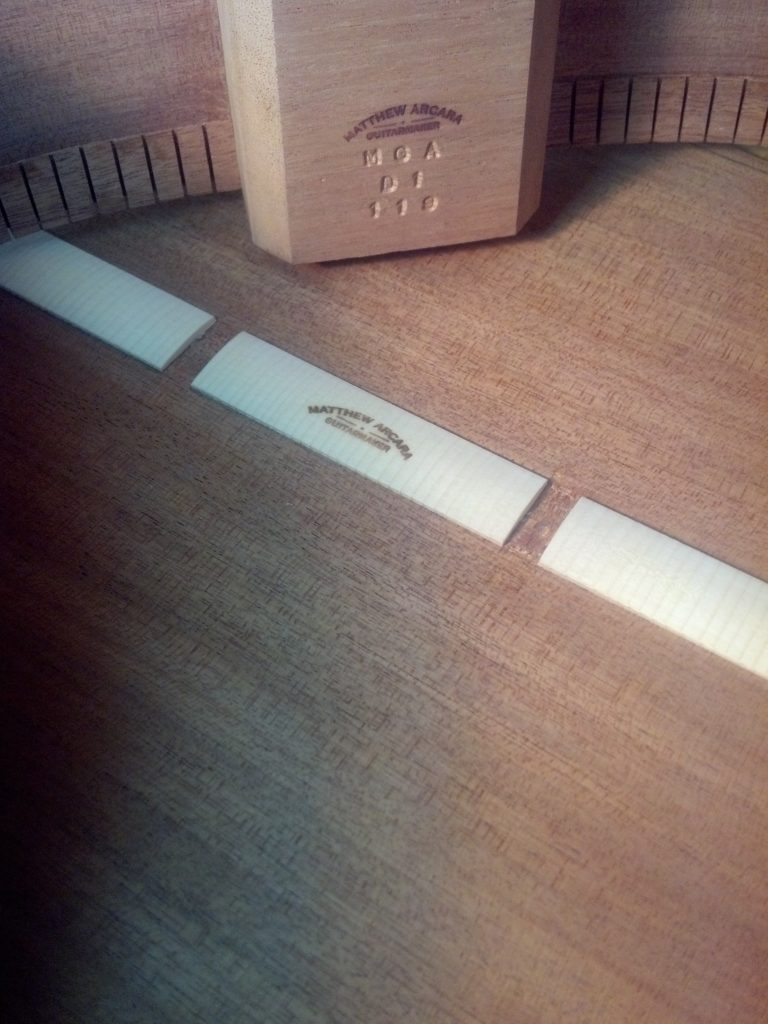 I think this speaks to the advantage I have of being a builder who has a lot of experience as a touring musician. I benefit from having an immediate feedback loop with my instruments and materials. I can play them and really get a fine tuned evaluation of what works with them and what doesn’t. Since I don’t have to really on words or others explanation, I think I have a more primary, fundamental and intrinsic understanding of how my instruments are working and sounding.

MA: The life cycle is just beginning again for me and I have just started a batch of two Ds, one mahogany and one Madagascar rosewood. I’m generally the most excited about the early stages, because I like that the work at the start doesn’t have to be very sequential. That makes me feel like I’m getting more done in the day and able to be flexible about process order. Plus it’s the state where I feel like the possibilities are more unknown; you haven’t heard the ring of the top with braces, and haven’t heard it change as it’s glued to the rib assembly. That yet-to-be-discovered sound is always of interest to me.

Here’s Matthew playing his personal 000-28, mentioned above. Check out his YouTube channel for more videos… 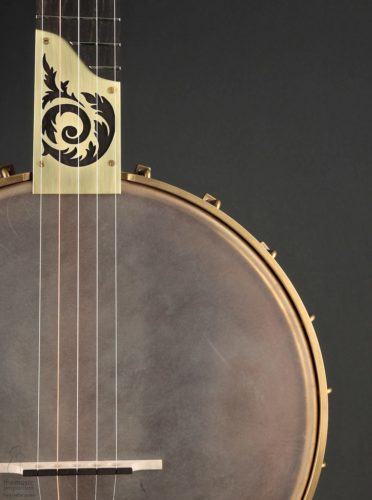 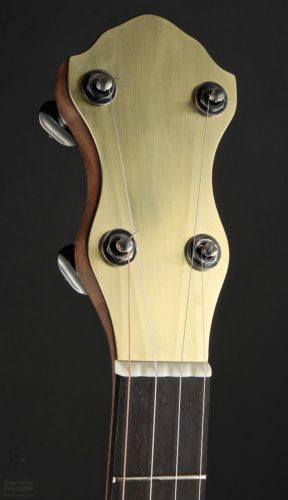 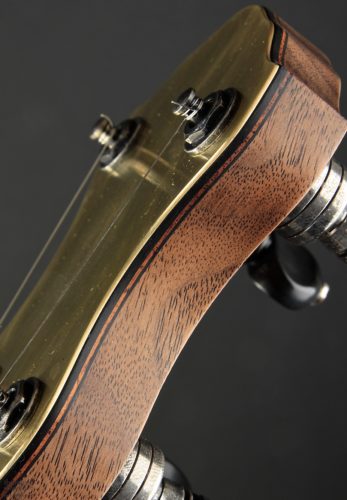 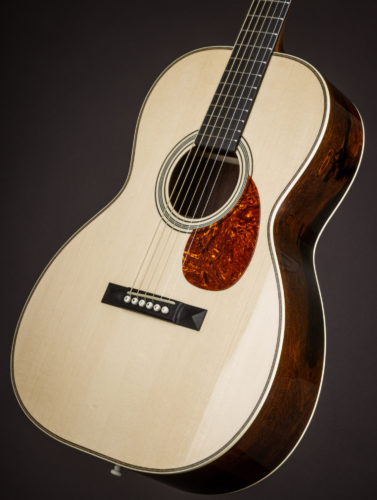 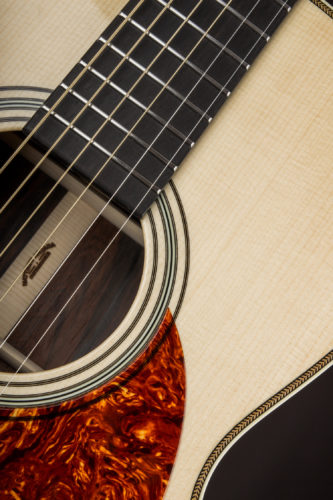 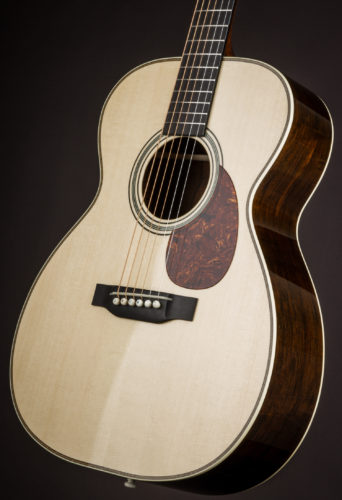 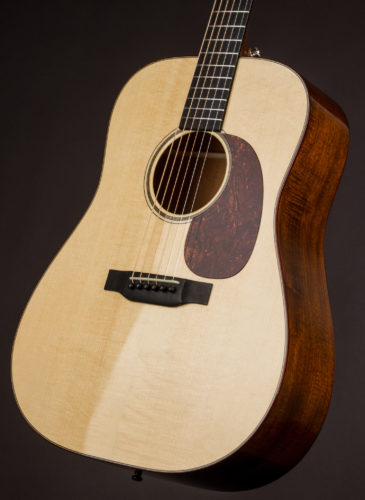 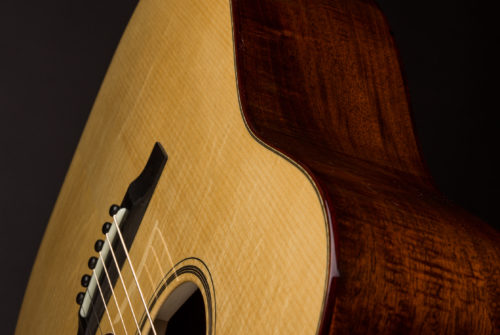 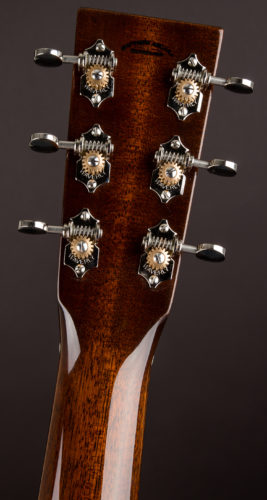 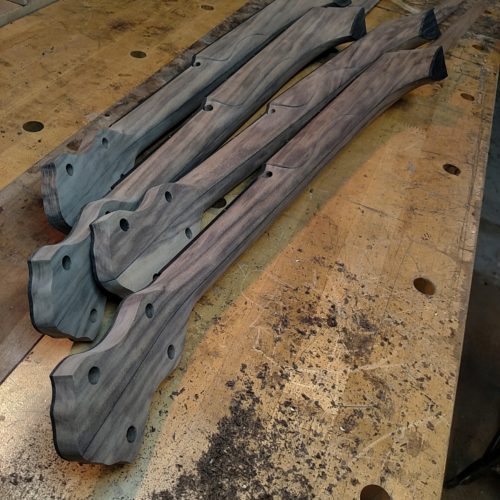 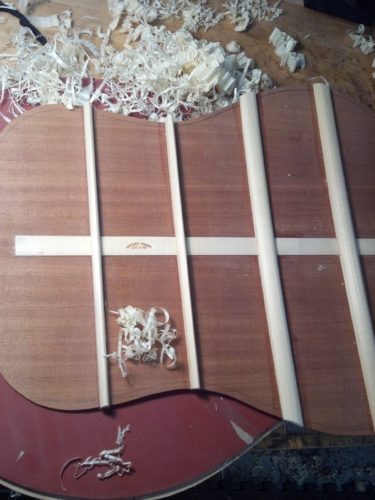 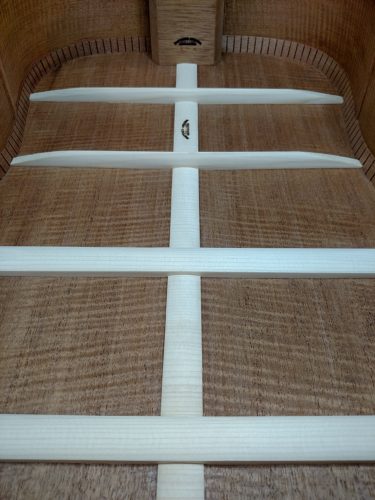 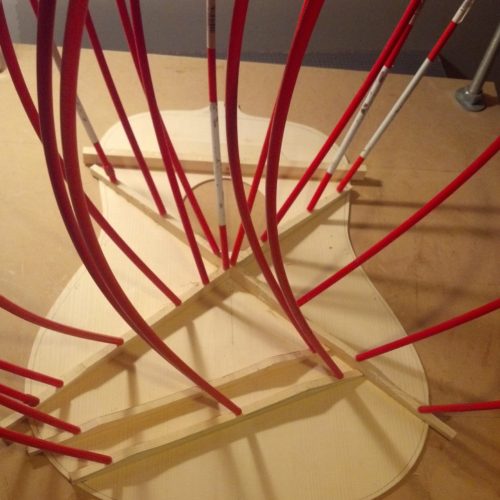 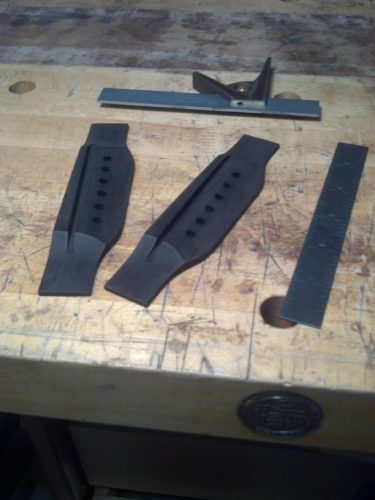