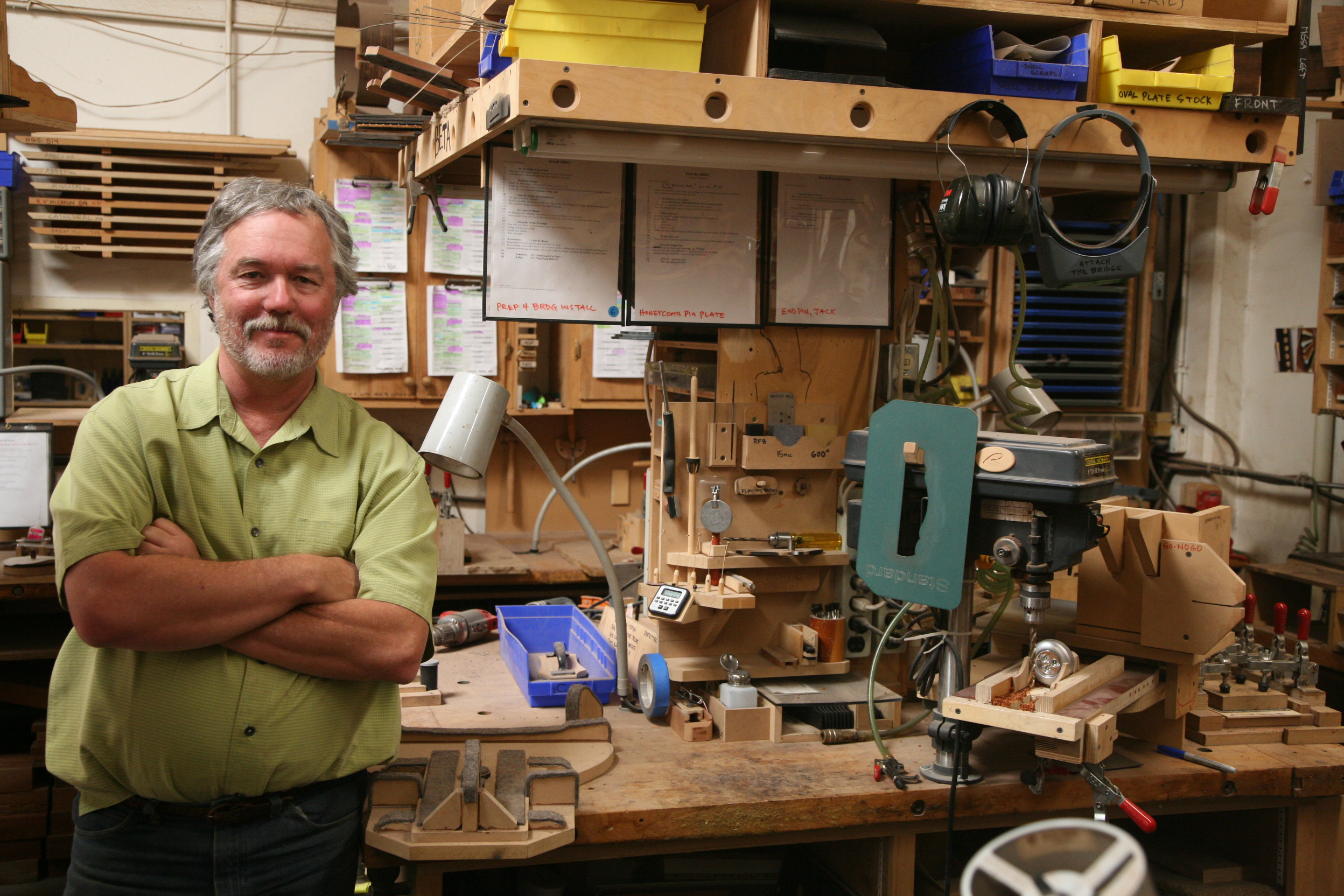 Most acoustic guitar builders are on the conversative side, mimicing the classic designs of the last century. With this week’s Bench Press we talk to Kevin Ryan, the Southern California luthier who is just the opposite: He’s always pushing the boundaries of design, innovation and performance. Ryan, as usual, had plenty to talk about, from a new bridge to an ultra-rare “submersion redwood” that he just can’t get forget about.

Fretboard Journal: What’s on your bench at the moment?

Kevin Ryan: I probably have at least one of each model that I build. I have two Nightingales, a Cathedral and an Abbey Parlor currently on the workbench. I am particularly excited about one of the Nightingales: I have been intrigued for a few years with an incremental but radical innovation to my bridges. The innovation won’t be visually apparent – it is something internal and hidden inside the bridge itself – but it will certainly be apparent to the player in the tone and clarity of the instrument. I think this is the sort of design pioneering my clients and the industry have come to expect from my shop.

FJ: Can you tell us about the wood and construction techniques you’re using for the instruments you’re currently building? Anything unorthodox or new?

KR: I love sailing into uncharted waters. A good example is the Acoustic Honeycomb. That idea was the culmination of years pondering the idea of introducing a double-top concept into a very targeted area of the soundboard. It required some math and engineering and a few prototypes. And then the prototypes have to sit here in the shop for several months so I can observe them and really understand long-range implications of the design. At the end of the day, the Acoustic Honeycomb made my guitars so much better (both structurally and acoustically), and that is the payoff for the player in any new design idea.

FJ: Do you have a general design philosophy?

KR: I do. Every innovation or evolution in my guitars has to meet two criteria:

1. It has to have a real and meaningful impact for the player in sound or ergonomics and,

2. It has to be elegant and beautiful.

These are the prime drivers for everything I do. The first criterion simply means that I will never do anything that is flashy but lacks substance. Every idea has to earn its keep on my guitars, unambiguously and objectively. The second criterion is important because, at the end of the day, this is about the love of the instrument for my clients. I want the player to have to pick up their guitar and play it every time they look at it! It’s the entire experience – the sound, the look, the feel, the lines – that is the goal.

For example, I developed the Acoustic Honeycomb and EO Bracing with the single goal of making the soundboard lighter and more responsive for the player. Of course, the mountain to climb with all of this is to do it without compromising structural integrity. And therein lies the challenge: it would be easy to simply get rid of stuff on the soundboard, but you have to do it very deliberately and in full understanding of the ramifications. 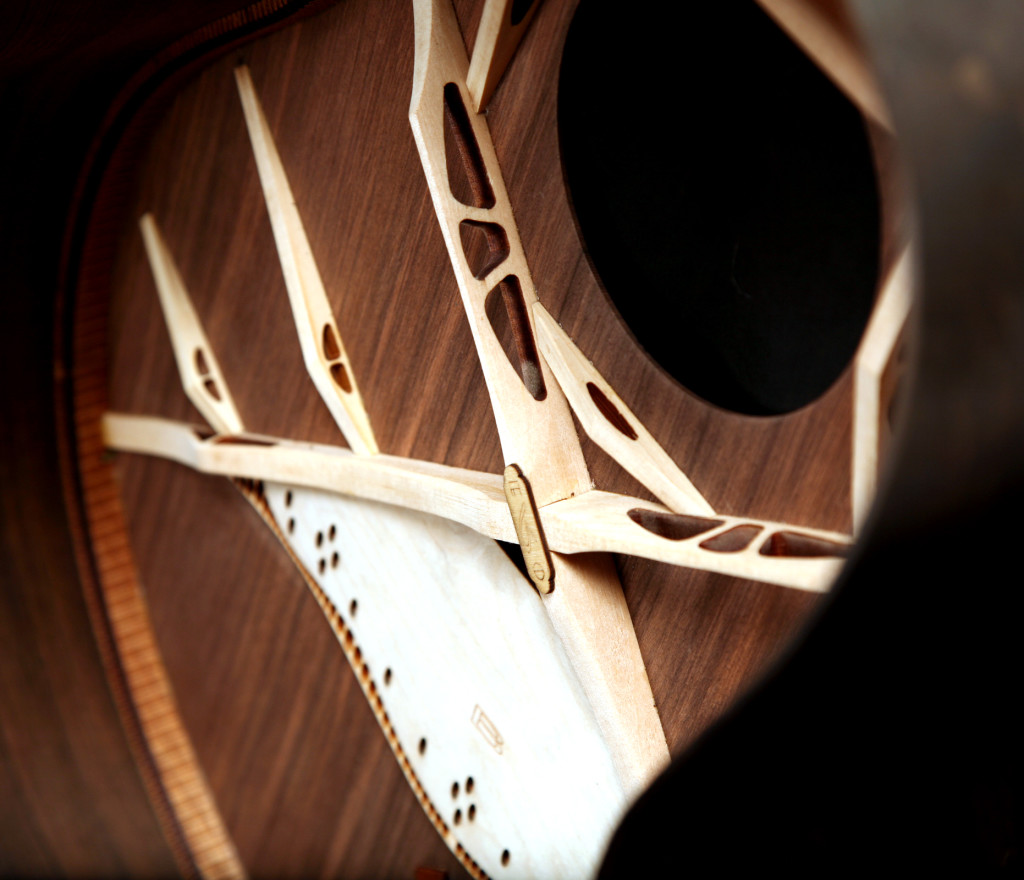 In addition, my guitars have a higher and tighter waist, a body depth that is a full inch deeper at the lower bout than the upper bout, and a more profoundly arched back. I designed these elements to make my guitar as comfortable and ergonomic as possible while still sporting the deeper lower bout, which maximizes the bass response.

The finishing ergonomic touch to all my models is my bevel, which I invented about 2002, having been inspired by Grit Laskin’s Arm Rest. I joke with folks that I should have patented the bevel, which would have affected my early and very comfortable retirement! But I am pleased to see my bevel and many of the other innovations so widely adopted around the world.

FJ: Besides guitars, do you build any other instruments? 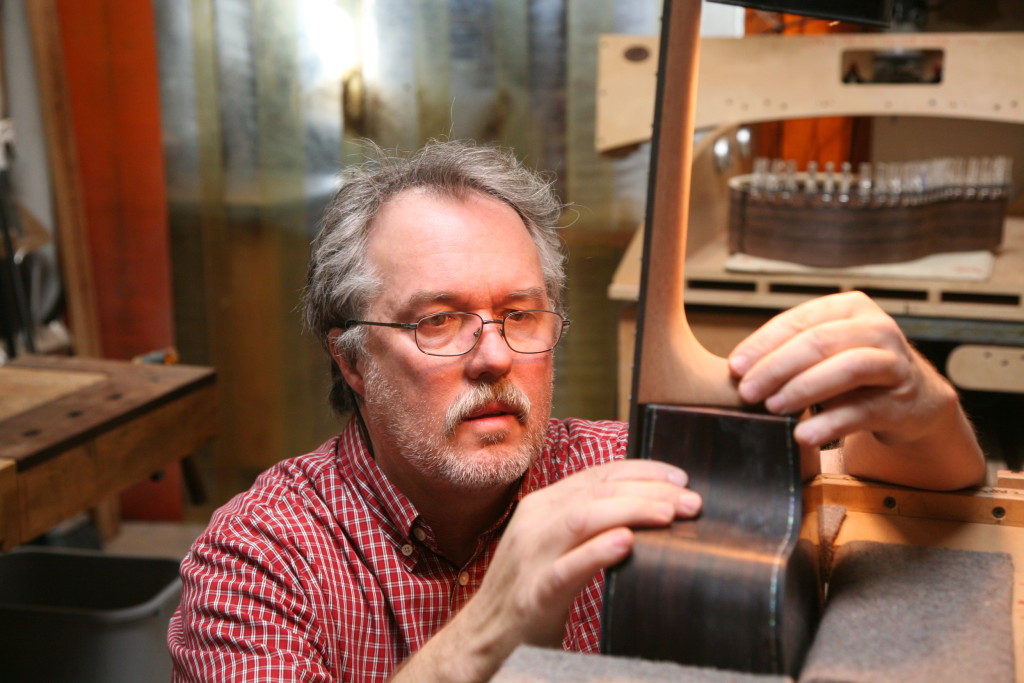 KR: Several years ago I got some special redwood from a friend. I came to call these sets “submersion redwood” (also known as “sinker redwood”). But one particular set was from a submerged log that darkened only around its circumference, resulting in soundboard plates that were chocolaty brown on one half, but pristine salmon-colored on the other half. The common practice with these sets was to join them with the dark halves touching at the soundboard seam and just hope the dark did not disappear too much at the lower bout. On a lark I joined them at the salmon side. Voila! I had nature’s version of a sunburst! I decided that it deserved its own name and called it a “moonburst”! (I refer to the wood as “moonglow” but the effect as a “moonburst”). As it turned out, those tops were acoustically amazing, too. I snapped up all of these tops I could find. At that time, they were considered almost “seconds” because the chocolate color did not cover the entire soundboard. The guitars I built with this “moonglow” redwood have haunted me. I have a few of these sets left.

KR: Several Major League Baseball teams have been following my son, James. Scouts for these teams now call him routinely so they can come to watch him pitch. He is 6’2″ and a fire-balling right-hander. Seeing him one day on a Major League mound, pitching in the “show” would be the coolest thing in the world. Yes, I know you were looking for some nifty guitar things in the future, but a man has to have his priorities… 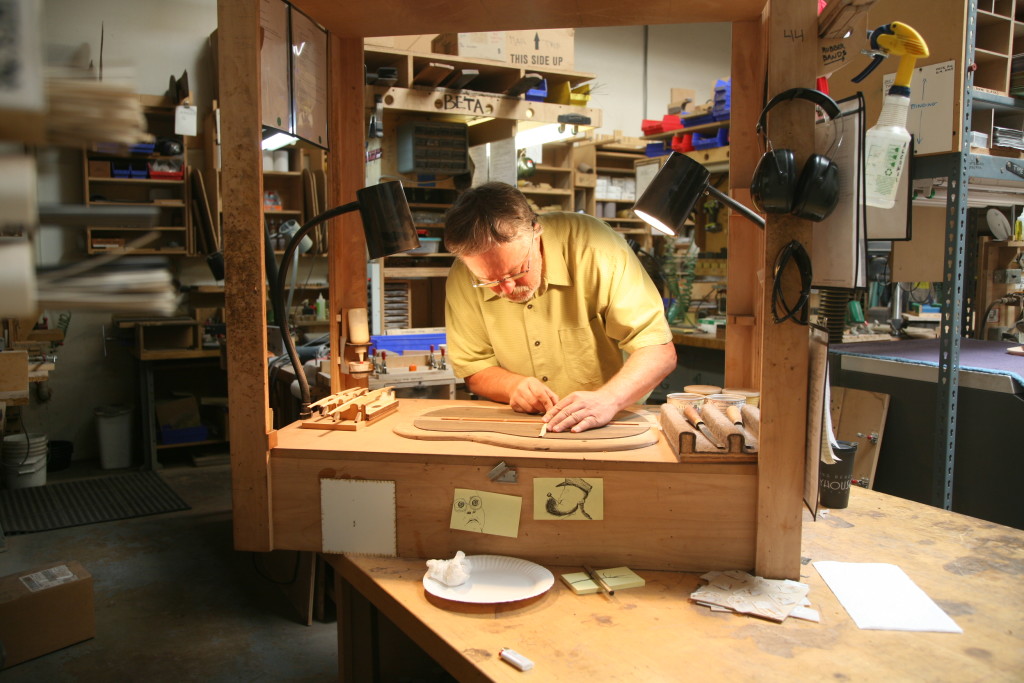 FJ: Tell us a bit about your shop space.

KR: My shop is located in Southern California, a few miles from the beach. I moved here from Ohio in 1994 to work in the Aeroscience Laboratory of Northrop-Grumman. I think those years were the perfect precursor to what I do now: high-level problem solving, state-of-the-art tools and processes, imagining everything in 3D space, constantly thinking about shapes and flowing lines. I even carried a security clearance, as most of what I did was top secret – kind of like my shop now, but without the security badge!

My years there were really wonderful. I learned so much in a very demanding environment, crafting small-scale, supersonic wind tunnel models. Sometimes I had to make one-off “things” (I cannot say more) where I had to invent the tooling or a process that had never been done before. That created a lasting legacy in my guitar shop – I refuse to think something can’t be done. A man with a CNC, a laser and a healthy measure of obsession can make anything he can dream up! “There is always a way!” might be the unofficial shop motto!

My shop is very crowded with benches and machinery and wood and jigs everywhere they can be tucked or set up. About 10 years ago I filled up the floor space, and now I am commandeering the upper reaches of the shop – in the rafters practically.

KR: It’s currently about a year, but you can imagine I am keen to shorten that wait without compromising anything my clients or I love about these guitars. Part of the ethos of old-world craftsmanship has always included the idea of practical efficiency, so I am always dreaming up new and better ways to do things so that whoever wants one of my instruments will be able to have one in a reasonable amount of time. I have a little section on the home page of my website allocated to giving folks updates about wait times and new guitars. Your readers can go there to sign up for my newsletter if they’re interested in staying apprised of news about these things.

Memphis Acoustic Guitar Festival: A Few of My Favorite Things