Here at the Fretboard Journal we are not afraid to venture into the vast frontier of fretted instrument building, both figuratively and literally. Joe Egan, of Egan Guitars, is a young builder living and working at the literal edge of the Western World, on Vancouver Island in beautiful British Columbia. His instruments seem to evoke both the wildness and the serenity of the far reaches of the Pacific Northwest, while embracing both traditional and “cutting edge” approaches to building guitars.

We had a great virtual conversation with Joe and learned a little bit more about the instruments he builds and how they come to be. You should also check out the lovely short film that Joe’s posted on YouTube, where he talks a little more about his process.

Fretboard Journal: What are you working on right now?

Joe Egan: Right now in the shop I have a little bit of everything being built. I have two bass guitars on the go, which I don’t build many of unless requested. A couple six-string electric guitars, two 23″ scale tenor guitars, a 21″ scale tenor guitar, and a few six- and seven-string steel string acoustic guitars. I do build a lot electric instruments, but most of my time and energy goes into the tenor guitar world and extended range/multiscale acoustic instruments.

FJ: Can you tell us about the wood and construction techniques you’re using for the instruments you’re currently building? Anything unorthodox or new?

JE: I don’t think my builds are super radical by any means, but with every build I try to tweak or alter something I might have done on a previous build; it is how I’m learning. Most of my tops are still based off of traditional X-bracing, just various degrees, depending on the scale length or material I’m using. Something else I’ve been playing around with a lot over the last little bit is soundhole sizes and shapes. Trying to help shape the overall sound and pitch of the box. A lot of my personal designs are small instruments, so I’m trying to control some of the projection and help with some string balance issues. 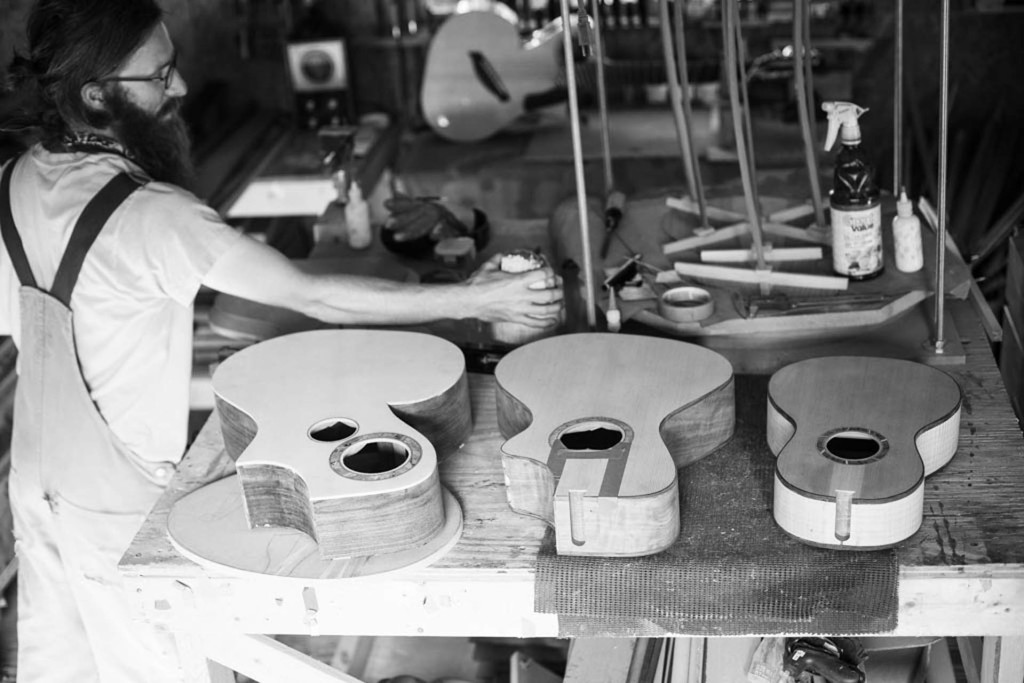 FJ: Where is your shop located?

JE: My shop is on Vancouver Island in Ladysmith, B.C. We are very fortunate to live on a 13-acre horse farm where my shop is just a hop, skip and a jump from our front door. My shop space is quite small, so a lot of my tools have to pack up and roll away when I’m not using them. It’s in an old building that used to be the lunch room at one of the local mills. Over the years I have learned how to maximize the space pretty well.

FJ: How did you get interested in building guitars and, subsequently, how did you decide to do it for a living?

JE: I was that DIY guy in high school, and even tried my hand at an electric guitar in shop class. I spent about seven years touring North America living in a van and playing music. I just gradually started fixing my own instruments, and over time friends would drop their instruments off for some minor work.

When I finally packed it in with the dirt circuit I decided to take a “Luthier” course so I could learn the proper ways of doing things. At the end of my course I ended up being asked to stay onboard to help teach at the school – not because I was a great builder but more because I knew how to work hard, show up on time and put in the extra time. Trying to teach guitar building and have the energy and time to work on my own designs was not working out so well. I had a young daughter on the way and knew that I wouldn’t be able to make this decision once she was born. So I had eight months to go for it and haven’t looked back since. 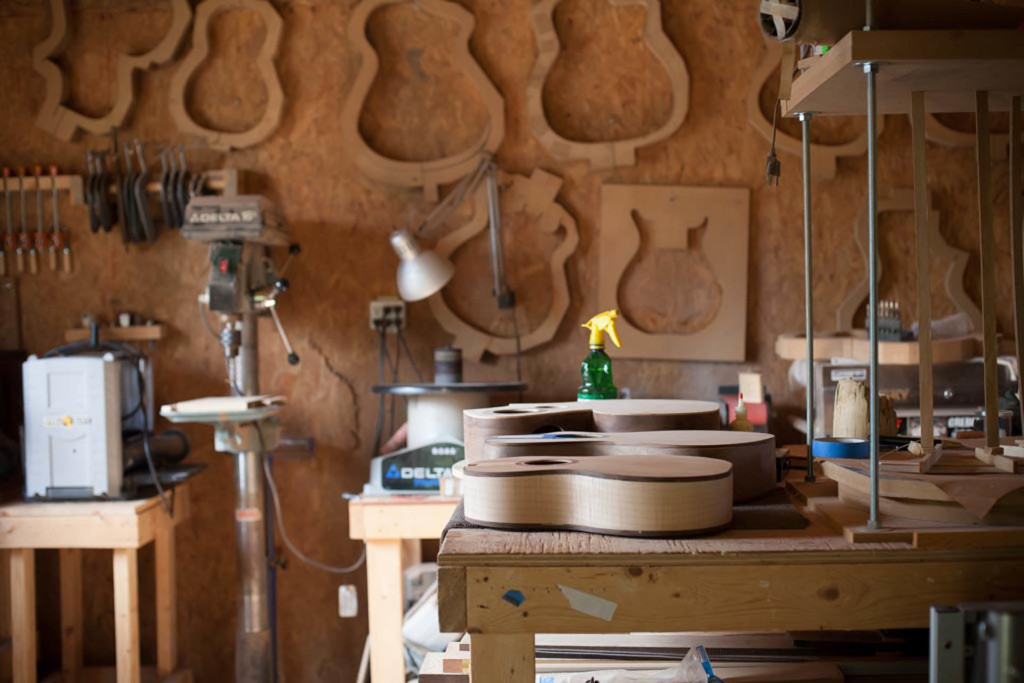 FJ: Do you have general design philosophies?

JE: I still play a lot of music and very much build from a player’s standpoint. I am constantly paying attention to the way myself and other people are approaching my instruments. Our eyes, ears and fingers are all very different. And I am always encouraging customers to voice their ideas and thoughts. Nothing is set in stone and I am always up for an experiment. As I stated before, my guitars aren’t too radical but I am always on the path to try and create an instrument that the world does not already have.

FJ: I suppose that raises the question, “What is too radical?” Your designs certainly aren’t traditional; what inspires you? How much is aesthetics and how much is engineering? For example, floating pick guards aren’t typical on flattop guitars these days…

JE: I’m open to all kinds of design concepts. Everything I design starts with a doodle or sketch in my notebook. I don’t usually set out to come up with something new, but when I’m feeling it I put pencil to paper. So I guess aesthetics is a huge part early on, but the more the idea/design progresses it starts to lean more towards construction and engineering. And am I no engineer, so I’ve learned my limits and lessons from blowing things up [laughs]. The floating pickguard is less of a “guard” and more of a suspended finger rest. At this point I feel the instrument is naked and incomplete without it, from both an aesthetic and functional perspective. 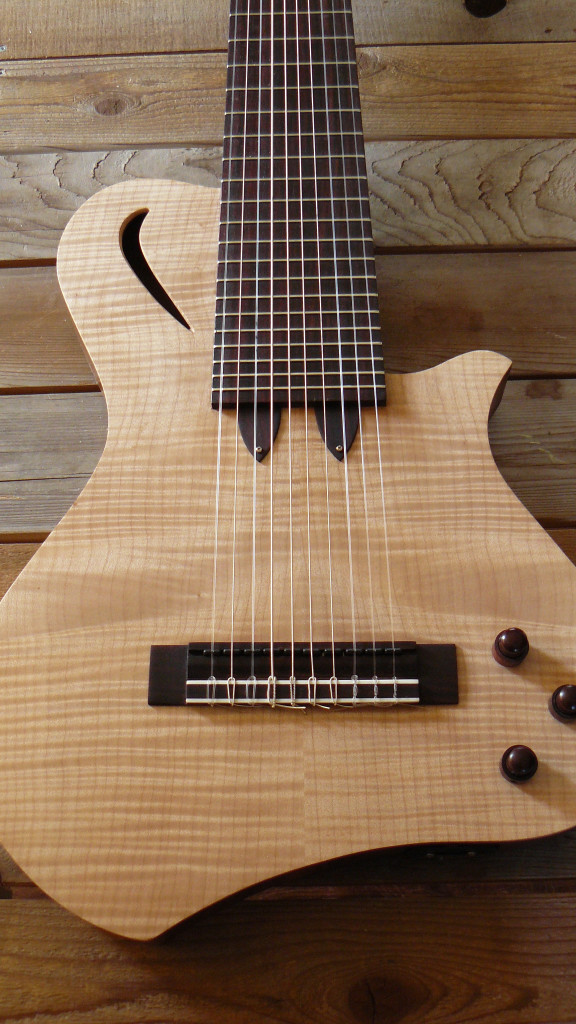 JE: It’s not too far in the past, but I recently completed a really cool 10-string, semi-hollow nylon string guitar. We had it equipped with a Piezo pickiup and a Midi system. It was tuned B standard on the upper seven strings, and inverted 5ths below that (g# c# f# BEADGBE). Chambered Mahogany body with neck-through construction, mahogany back and maple top. It was really fun to play and if nothing else this thing will get the inspirational juices flowing for the player.

JE: I don’t book any farther than seven or eight months in advance. With my small space, I run out of bench space very quickly.

JE: I try not to look too far into the future with my builds, as I find I start tumbling on what’s going on right now on the bench. I have a few builds coming up where I am working with a few artists that I admire very much, and look forward to the challenge.