On an unobtrusive street in South Seattle, David Haxton resurrects the classic Depression-era Gibson sound, one guitar at a time. Haxton draws from the tradition of these classic guitars, while adding his own improvements to make “exceedingly functional guitars with great tone.”

Legend has it that Robert Johnson made a deal with the Devil on a deserted Mississippi crossroads one dark, moonless night. That act sealed a pact for the bluesman’s soul that would guarantee him a lifetime of easy money, women and fame. Of course, the Devil has his price, which Johnson paid for with his young life. Decades later, musicians everywhere couldn’t help but notice that the guitar Johnson held in his most ubiquitous photograph was a Gibson L-1.

The L-1 was Gibson’s first full-fledged acoustic flattop. Prior to that, the company had previously made a name for itself with its mandolins, banjos and archtops. Soon the company expanded the flattop line, creating a signature Nick Lucas Special for the “Tiptoe Through the Tulips” crooner, which had the same body shape as the L-1, but with a deeper body and fancier appointments. The J-35 and the Advanced Jumbo were unveiled, the first Gibsons to feature rosewood backs and sides. The company was enjoying the success of its more modest L-1, L-0 and L-00 flattops, too. In 1937, they introduced the Super Jumbo (later the SJ-200), a custom instrument originally made for singing cowboy Ray Whitley. The SJ-200 became a status symbol for performers playing the Grande Ole Opry and the Country & Western circuits. Gibson managed to continue production of new models during WWII, including the J-45, J-50 and Southern Jumbo. 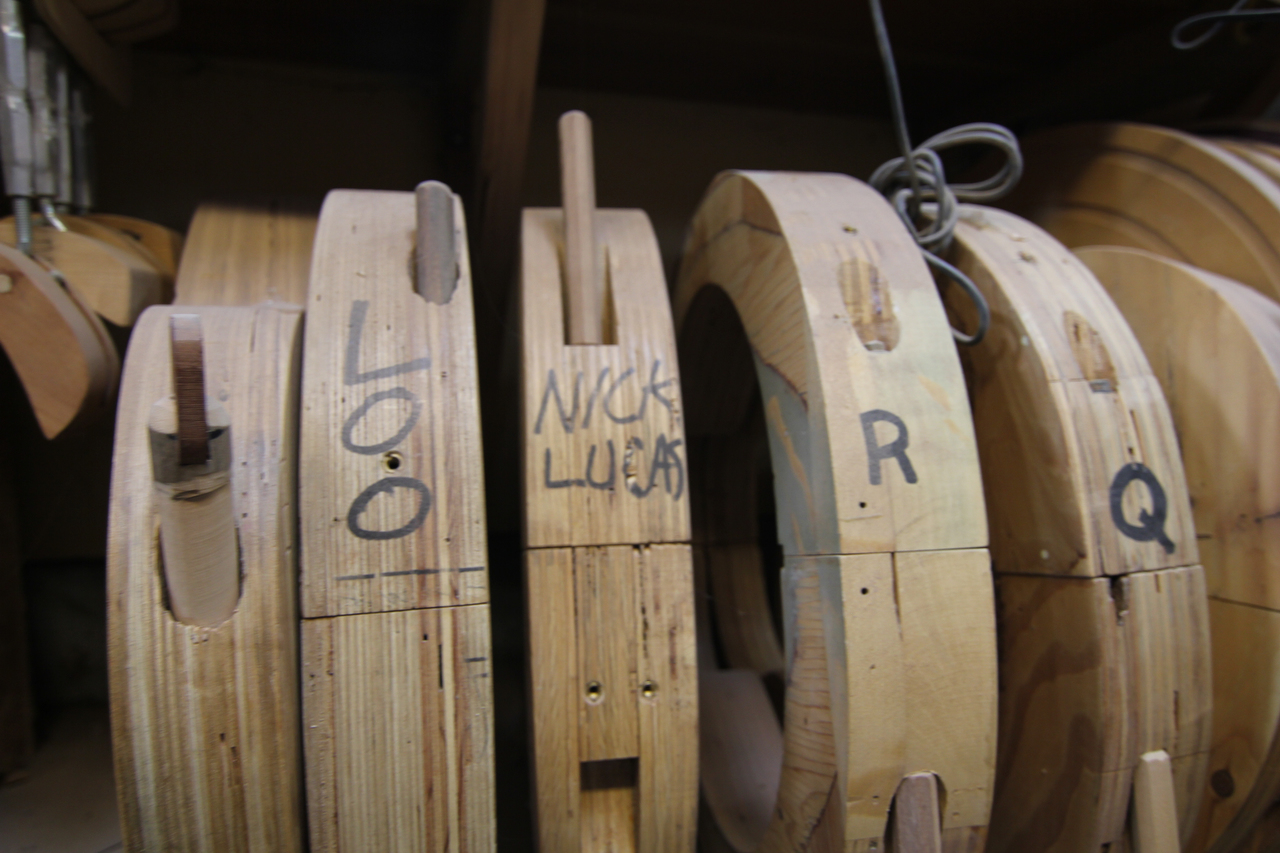 Haxton became intrigued with this era of Gibson instruments. During his college years, while working as a woodworker in a boatyard, he decided to build his first guitar. As he later developed his craft, he noticed that the Gibson guitars were similar to the ones he was doing on his own. While working at the repair bench of Seattle’s foremost acoustic guitar dealer, Dusty Strings, he saw the “good, the bad and the ugly” in guitar design and construction. The builder’s years in the guitar repair field illuminated some common structural faults. “A lot of these companies never went around and asked the people who were going to have to repair [them]. An engineer designed it in a vacuum and it goes into production.” 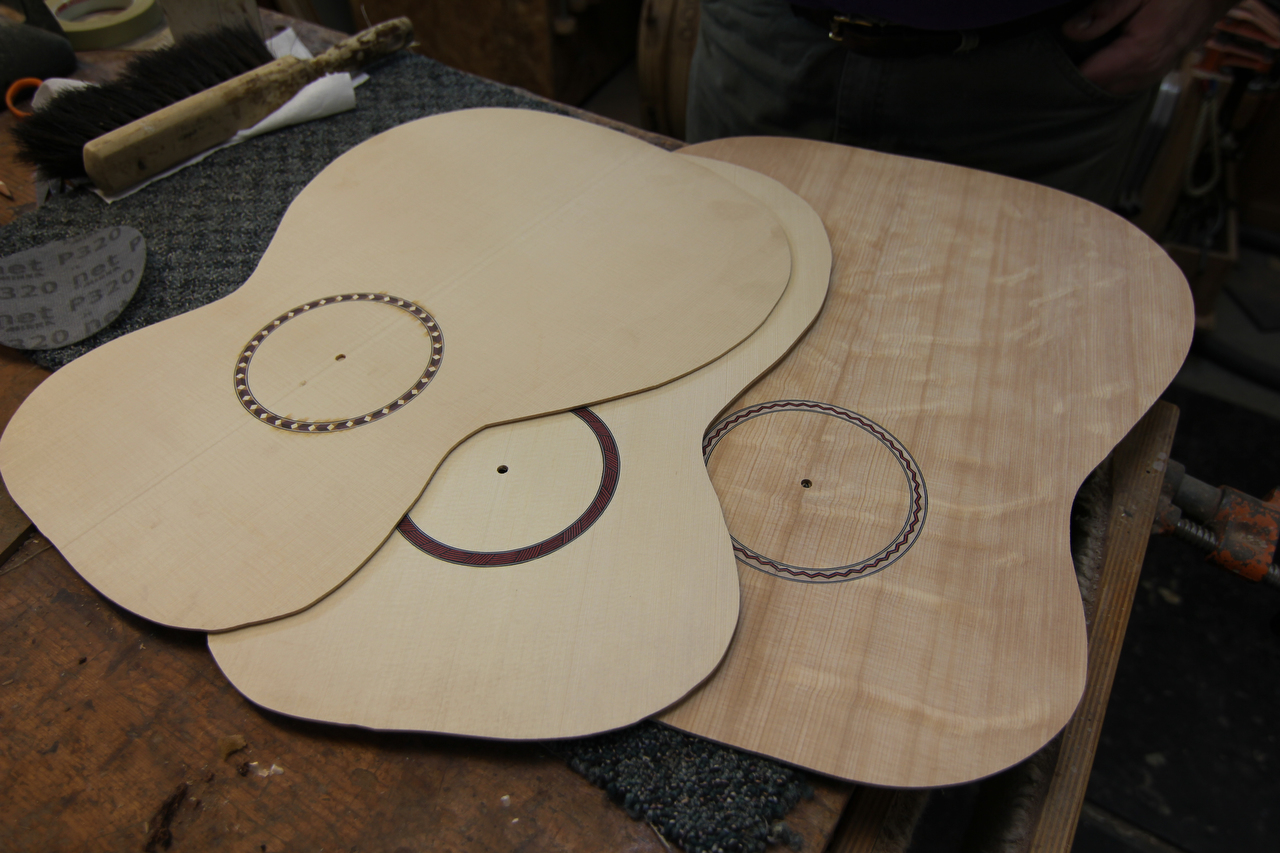 Haxton would pirate different bracing constructions and try them out on his own guitars. With 60 guitars under his belt, he still likes the Gibson patterns best, but he’s developed improvements over the years. “With the Gibson patterns, the bridge is barely touching the X-brace so it needs to have some contact,” he says. “This makes for a more flexible top but you want to control it, too. Too much flexibility would sound pretty muddy and just awful. More flexibility, I think, allows those midranges to come out. So this is why these guitars tend to have a more even tonal quality over the range from bass to treble as opposed to the Martins which can be a little ‘bass-ier.’ The X-braces are shallower and it’s just the way of the construction of them.” For the most part, Haxton uses the more traditional European Spruce for his tops, and Honduras Mahogany for his 00-series guitars. “It has enough punch to sound good, but it has a warmth to it.”

After seeing many guitars with faulty neck designs, he decided to perfect his own. “There’s a tendency for guitars with a glued down fingerboard to have a hump in the area of the fingerboard, mainly because you have a very stiff area between the nut and the body joint of the neck, but once the fingerboard passes over the top of the instrument it becomes more flexible. I saw this a whole bunch of times… there would be a hump, as the fingerboard went over the body, which is difficult to deal with.” His neck design incorporates a tongue with two carbon fiber rods, in addition to the slot for the truss rod, that extend over the joint so the whole length of the neck is one unit. A half -inch thick piece fits down into the headblock to make a sound and structural joint that is also lightweight and adjustable. This C-shaped neck block also spreads the load of string tension from the top through the sides and back, curtailing string energy loss through the neck. Today’s players  are more demanding of action height and playability than they were 50 years ago. Haxton never changes the saddle height, preferring instead to adjust the neck to accommodate changes. 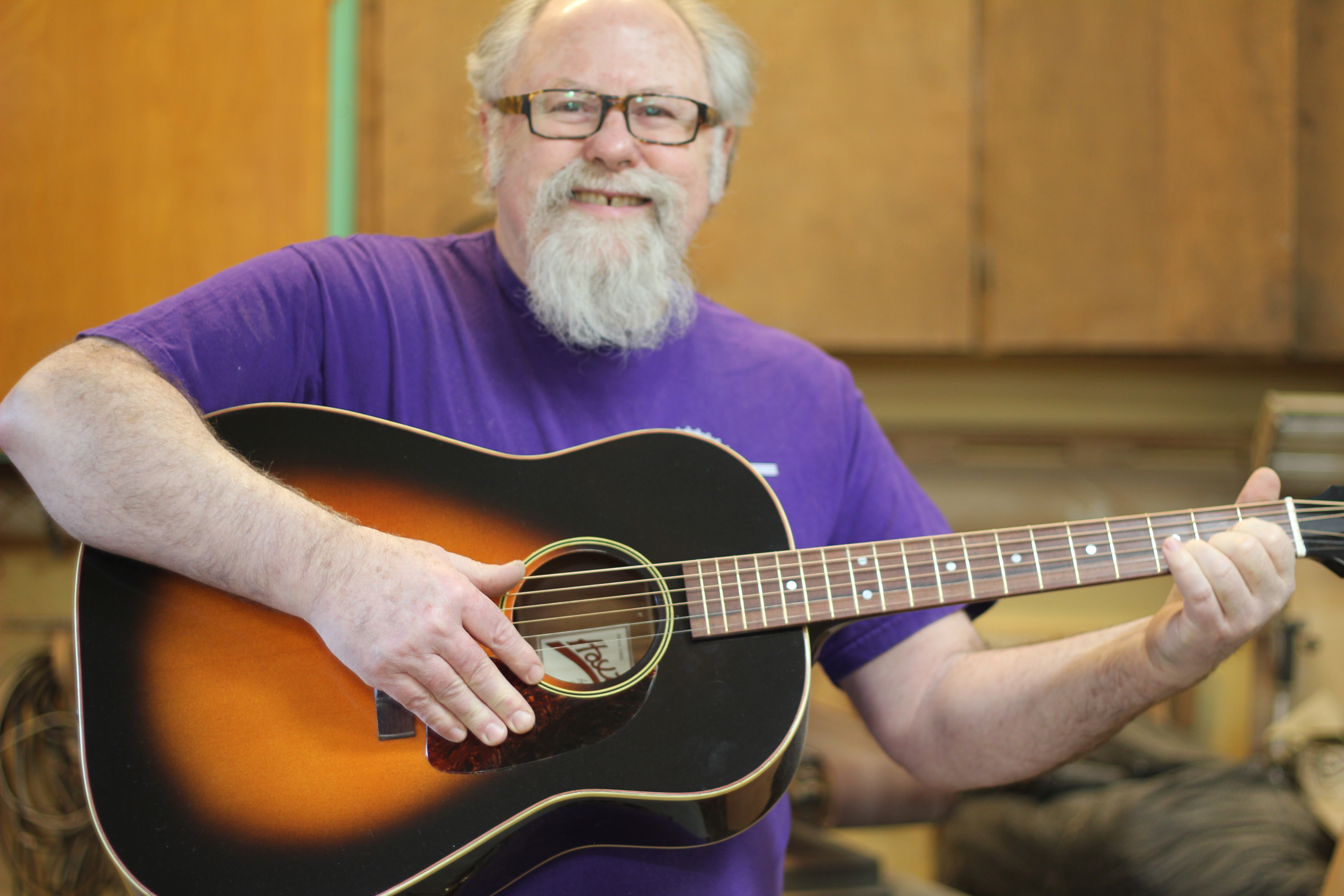 Another improvement Haxton made was to use a solid lining as opposed to a kerf lining. “Kerf linings will always be segments of a straight line,” he explains. “Bent linings have full contact with the guitar. Also, you can make them thinner and so you end up with less surface connecting the back to the sides. This is good because it allows a little more vibrational area in the plates and it tends to strengthen up the whole body–the shell. My whole philosophy about anything is to build it strong and build it light as possible.”

Haxton uses the traditional Gibson sunburst finish on his guitars, which he paints and finishes himself – a time consuming and difficult process. “I allow about a month to do the finish. Obviously you’re not working on it a month, there’s a lot of waiting time in between.”

“That whole idea is that you’re trying to make an exceedingly functional guitar. There are a lot of little details involved in it,” he says. “The fact that the brace ends are pretty well-tied down underneath the lining, there’s a notch for the lining. Those sorts of things, the fact that the linings fit snugly against the sides and leaves a small footprint for the two plates to join. All of these little things tend to add up to create a bigger whole.” The devil is indeed in the details, but for now, Haxton appears safe. He may have vices, but they seem to be mostly of the woodworking kind.

Learn more about David Haxton via his website here. 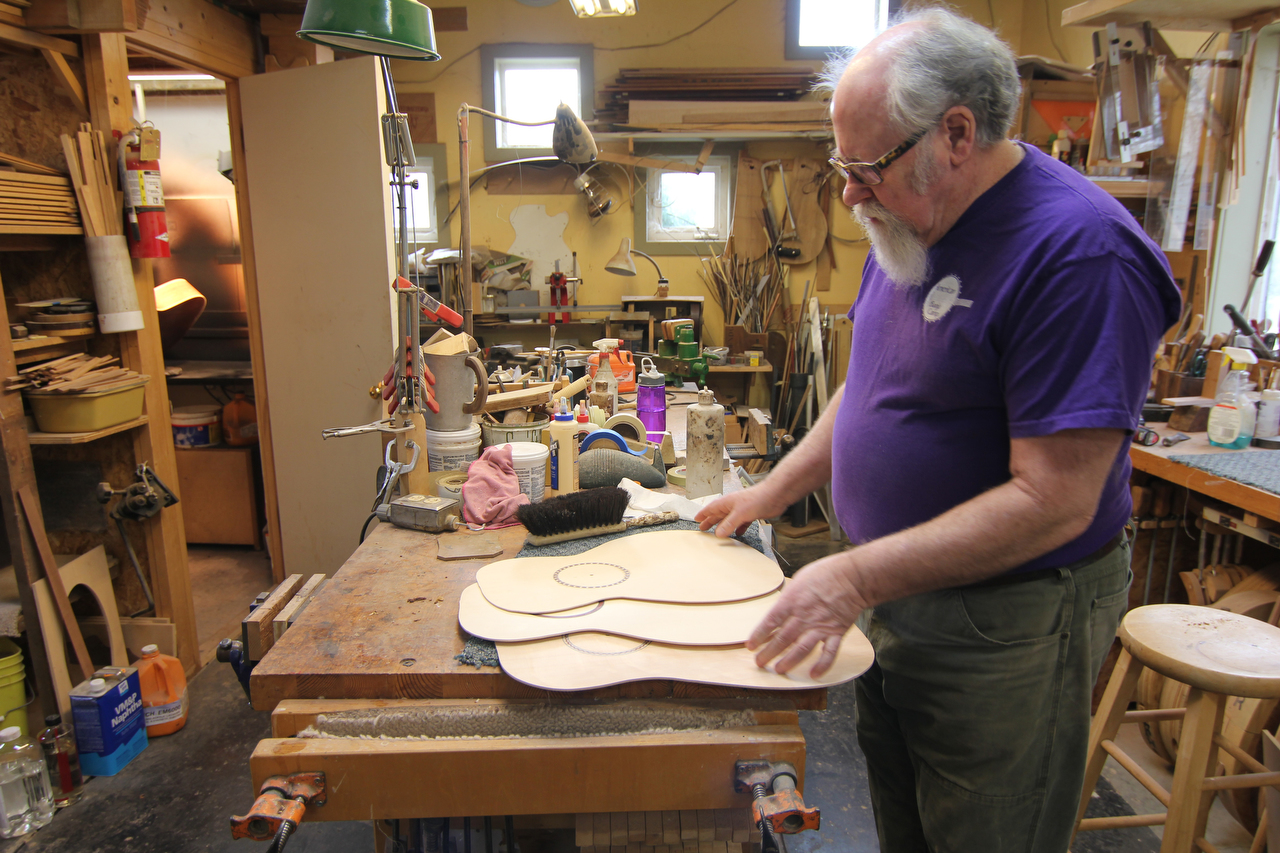 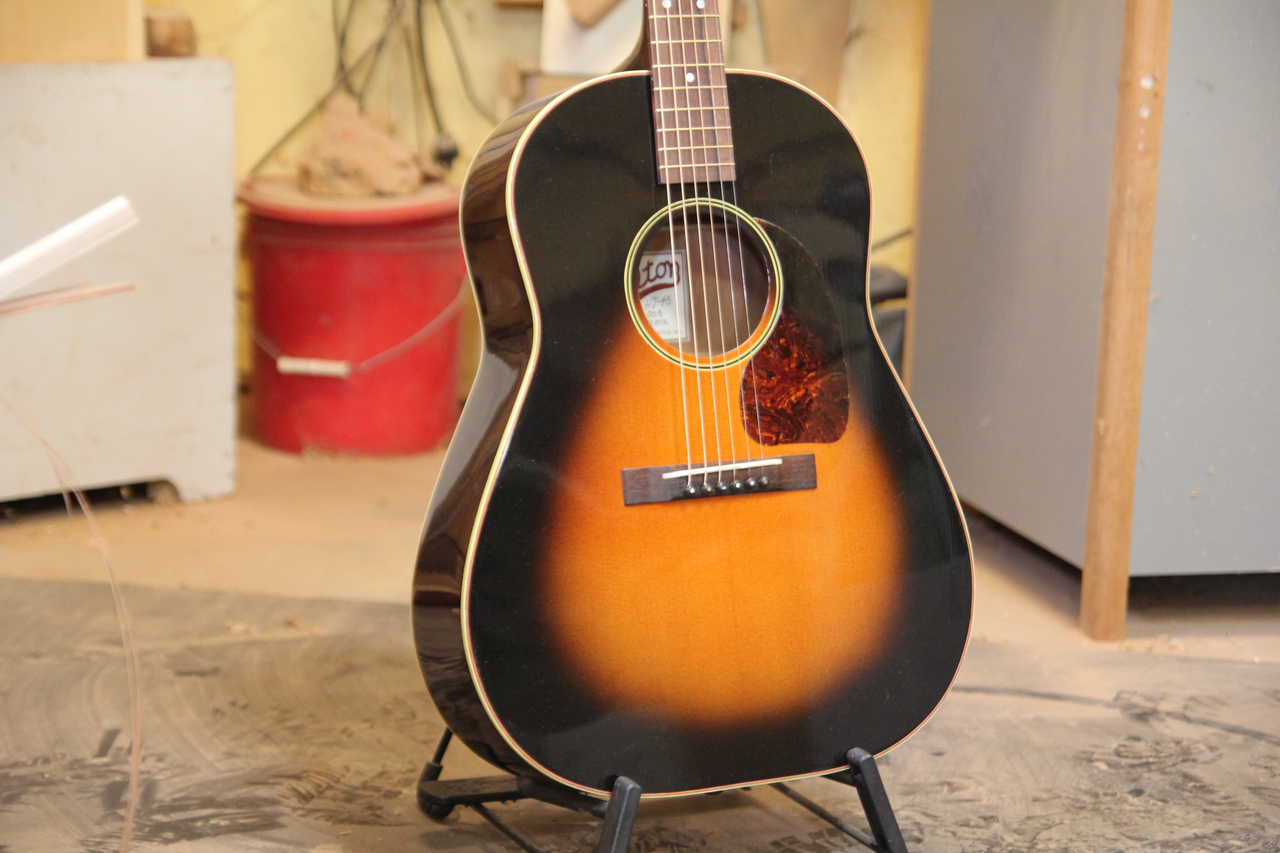 Life in the Trenches: Jon Woodhead’s Telecaster and Les Paul