Marshall, Michigan (population 7,088), the seat of Calhoun County, is in the same geographic ballpark as Tony the Tiger’s ancestral homeland, Battle Creek. It’s a very pretty small town, filled with distinctive architecture from the middle and late 19th century. The main street, however, is an excellent example of early 21st century mid-American tourist destination economy. Stores include The Rice Creek Emporium, Tracy’s Primitives and Antiques, The Main Street Beanery, and Just Bead It: Jewelry and Bead Supply.

It’s an unlikely setting for the home of a global manufacturing enterprise, but right there, at 130 W. Michigan (next door to the office of Dr. David Heidenreich, D.D.S.), stands the “corporate” headquarters of Northfield Mandolins, makers and purveyors of world-class eight-stringed treasures.

Northfield is the dream come true for local boy Adrian Bagale and his brother, Peter. The Bagales grew up in a musical family. Their musician father had an instrument jones and collected a wide variety of toys. He was also a tinkerer and built early versions of drum machines and synthesizers.

But while the father loved the music and the digital tinkering, Adrian was primarily “crazy about the acoustic gear.” And so, after college in 1996, he made his way to the nerve center of the central Michigan fretboard world, Elderly Instruments. He was soon assigned to the high-end room, where, among other things, he got to demonstrate a $165,000 Martin D-45.

His job title was Vintage Acoustic Instrument Specialist and, from this exalted perch, he was given access to the as-is pile of instruments. He bought a 1960s Martin and a 1917 Gibson A-style mandolin at fire sale prices and took them home to restore.

“And when I had completely screwed up the job,” Adrian says, “I would bring it back to one of the senior technicians and try to find out what I had done wrong.” It was a rare chance to find out what makes fine old instruments tick … or not. 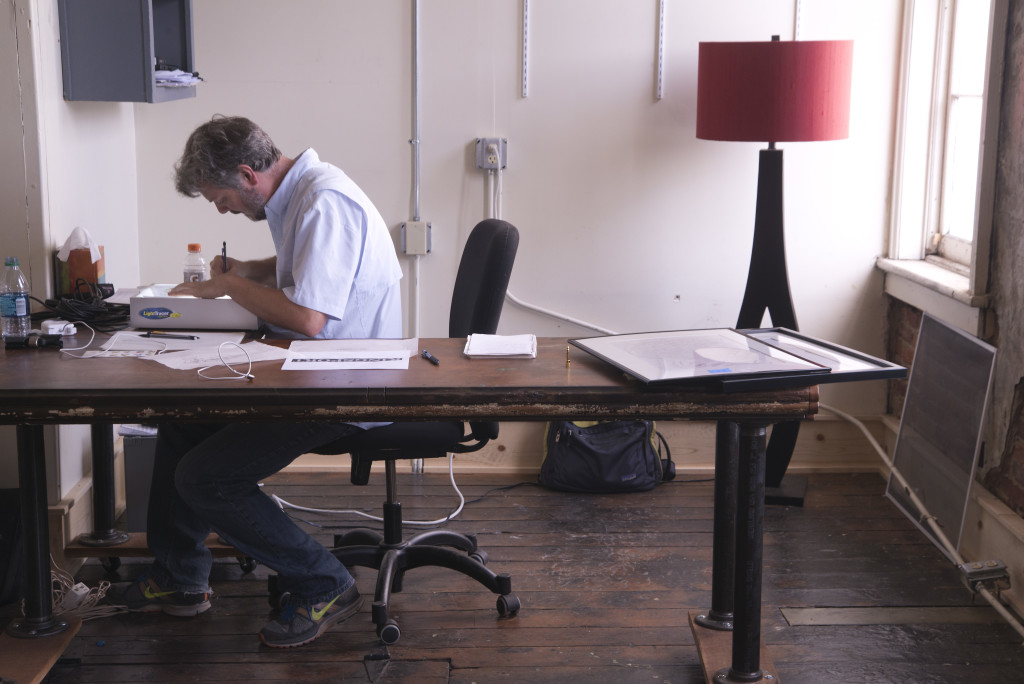 In 2002, his worldview changed significantly when he became a Global Liaison for Saga Musical Instruments and began commuting to Japan, Korea and China from his home in San Francisco. The constant travel meant that he was never seeing his daughter, along with other complications. So he decided to move the family to China, where he set up a manufacturing facility in Qingdao for Saga.

Within a few years, Adrian had gone from working in the rarefied air of Elderly’s high-end room to running a manufacturing operation that turned out an export container full of Kentucky brand mandolins at a time. And he realized that it wasn’t the occupation he was looking for.

With the assistance of his new partner, Kosuke Kyomori, a Japanese national working as a production manager in China, Adrian began a mission to create high-quality mandolins in small numbers for a worldwide market. He realized that he had retained quite a bit of knowledge from his old job. “When you’re looking at 1,100 mandolins a month, you learn how to put a mandolin together,” he says.

To earn money while he and Kosuke set up their workshop and started the process of creating the Northfield product, Adrian took a job at a travel-accessory company. “We wanted to make the mandolin we wanted to make.”

It took them almost two years. Along the way, dozens of failed instruments ended up as firewood in the Chinese winter. 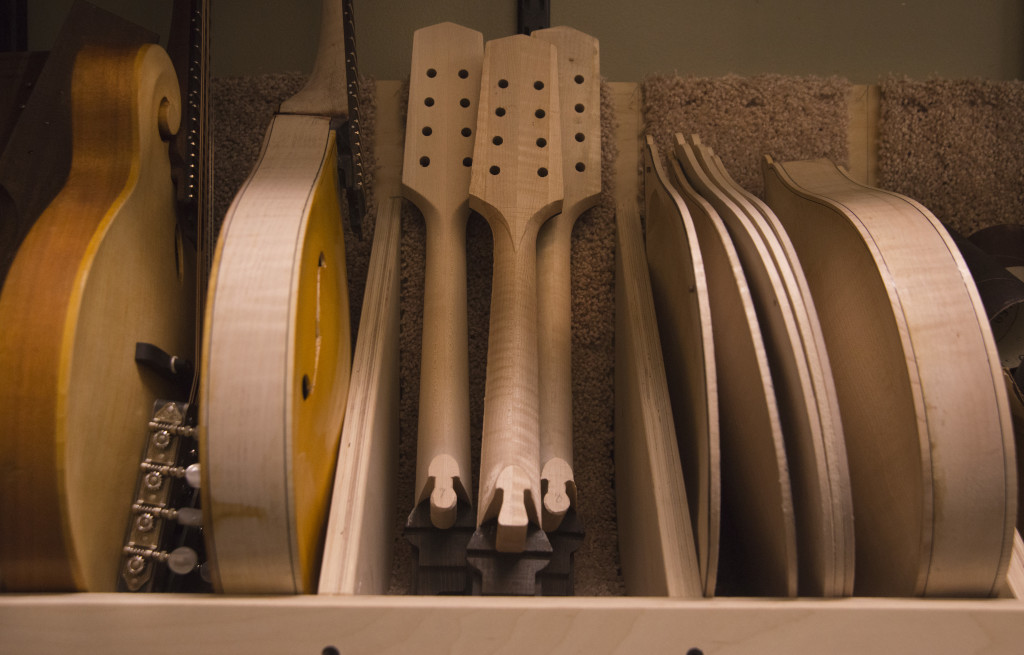 Because he couldn’t find the wood he wanted overseas, Adrian moved back hometo Michigan in 2008. He now takes frequent buying trips to Maine, Quebec and Michigan’s Upper Peninsula. Kosuke remains in charge of the workshop in Qingdao.

Hence, the establishment of a Sino-Yankee-Nipponese multinational enterprise, headquartered right across the street from the Marshall Antique Center.

In addition to Northfield’s Master models, which are created in China with Western Hemisphere hardwoods, the company has introduced the ‘S’ series instrument, which is itself manufactured in Marshall. The model, an A-style with blond wood and very clean design, retails in the $2,000 range.

The building that houses Northfield Mandolin is the antithesis of 21st century suburban corporate architecture. Texture is everywhere. The place was built in 1874 and contains an embarrassment of lead glass and chandeliers. The walls are formed out of red clay bricks, and Northfield’s products hang on them, basking in the ever-changing light coming off Michigan Avenue.

Because this is a company that deals in beautiful woods, fine grain presence is everywhere. Two elegant benches carved from slabs of curly maple enhance the space. On the far wall, a selection of hardwood samples awaits perusal by Master series buyers. Many Northfield customers make the trip to Marshall to pick out the piece of wood they want for their instrument.

The atmosphere is reminiscent of the HBO series Silicon Valley, in that every individual is doing something different, with a sense of disorderly order. Kjell Croce is refurbishing an instrument that has been played hard by a member of Lindsay Lou and the Flatbellies. Several inches of naked wood south of the strings show evidence of a bluegrass life lived full-bore.

Peter peruses the selection of music videos he has made of notable Northfield customers. We watch Adam Steffey blaze his way through several selections. 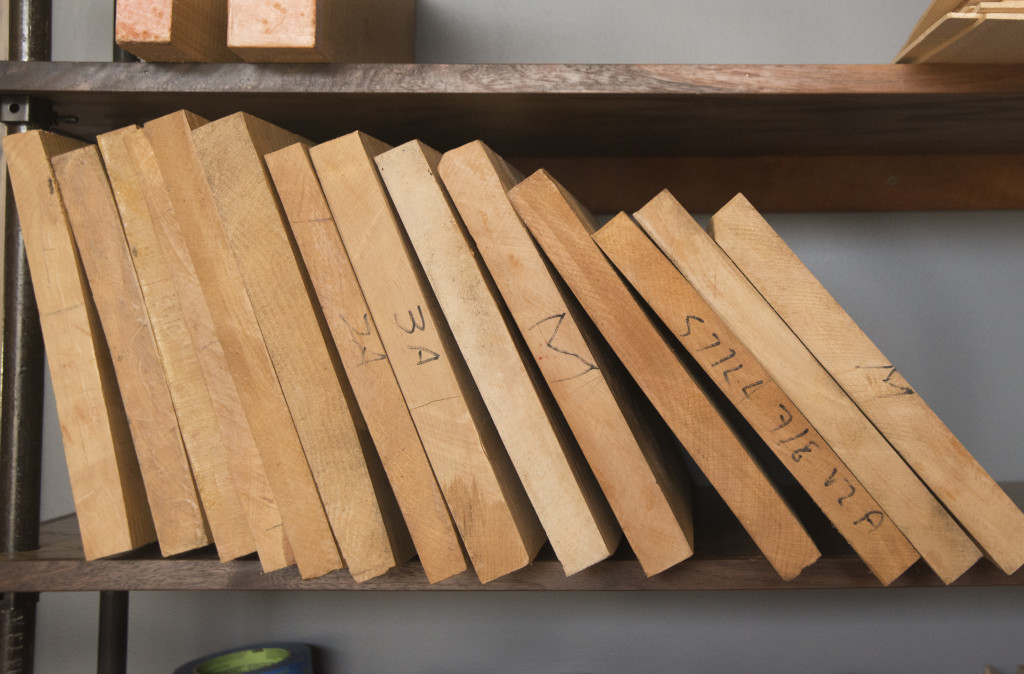 In an upstairs office, Adrian is hard at work creating a custom inlay that will grace an upcoming purchase. “The customer wants a D’Angelico feel to the lettering, and I’m trying to work with that,” he says. I can’t help comparing the task of rendering one custom inlay by hand with loading 1,100 mandolins into an export container.

A cache of high-end guitars in their cases sits in the middle of the large, single storefront room. When I ask about their presence, here in the Temple of Mandolinia, Adrian tells me, “A fellow owed me some money and gave me these guitars instead.” Judging from the quality of these instruments, it must have been serious bread. Work stops as the associates gather at the leather couch that doubles as conversational ground zero for the place. People sit on the leather sofa or on the maple table. They are joined by Joe Konkoly, an old friend from Elderly. Guitars are strummed; talk revs up.

Varnishing, refurbishing, designing: It all comes to a halt as the Martins start to resonate.  I look around the room. It’s the middle of the morning and not a time clock in sight.

Northfield mandolins are played by a host of great players such as Mike Marshall, Adam Steffey, Emory Lester and many others. This year they begin delivering their new Artist Series and plan for the release of two new guitar-bodied octave mandolins. Check their website for tons of pictures, videos and information about the full range of their instruments.

The full article text and exclusive photographs are available in the print edition of The Fretboard Journal #35. 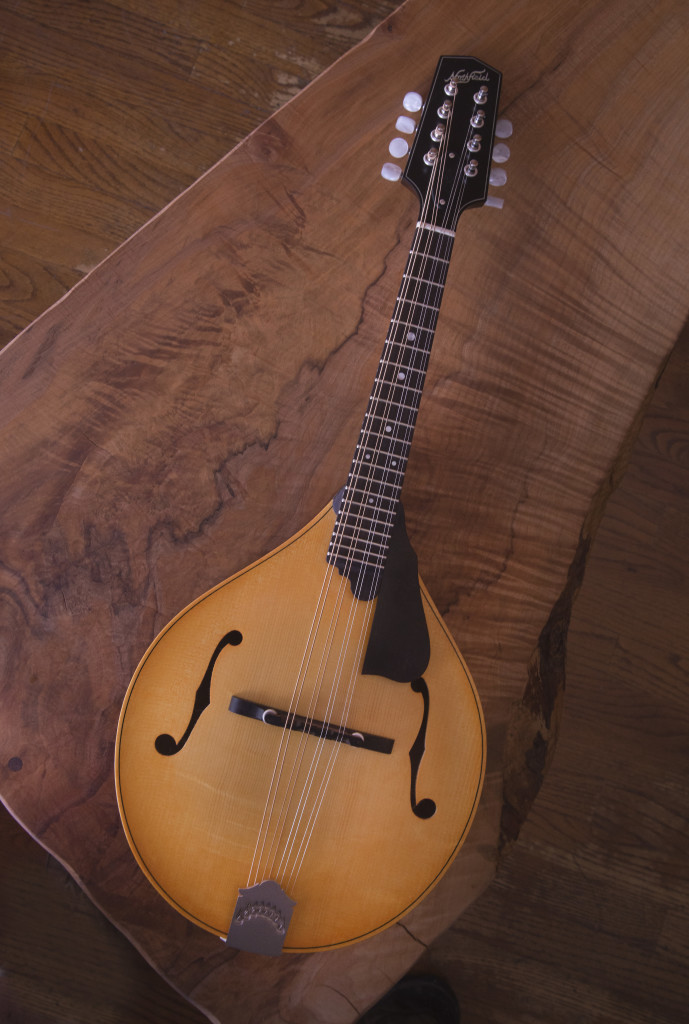