It’s kids’ hour at the Acoustic Guitar Meeting and these folks know how to mix fun with learning.  First up is Paul Moore, who offers a short introduction to his Musical Medicine Show.  Brandishing a ukulele and a glowing Hawaiian shirt, he’s dressed the part, puts on a spirited, two-song set, and leaves the young audience grinning and ready for more music.

Master of ceremonies and the Festival’s general manager, Alessio Ambrosi, next gives a brief summary of the life, music, and legacy of Woody Guthrie.  “It has been one hundred years since his birth.  He influenced Bob Dylan, the Beatles, everyone.”  Then, Jean Raphael takes the stage.  He offers us something that may no longer be possible in the States:  a sincere, heartfelt, irony-free rendering of “This Land is Your Land.”  It’s a song that, through overexposure and customary politically motivated editing of lyrics, has lost some of its force in its homeland.  But here, it sounds fresh and Raphael includes the oft-suppressed trespassing verse:  “as I was walking, I saw a sign there, on one side it said no trespassing.  On the other side, it didn’t say nothing. That side was made for you and me.”  The kids enjoy his performance, maybe they take away a bit of Guthrie’s message and, at the very least, I marvel at how fresh this song seems in an environment new to me.  For the first time in a good, long while, I appreciate the beautiful simplicity of Guthrie’s signature song.

Want to squeeze a semester long university course in world music into 15 minutes? Want folks from ages 5 to 80 grinning, tapping their toes, and doing their best to clap along?  Welcome Bob Brozman!

The irrepressible and, as usual, blazingly festooned Brozman begins his set with a “lesson in the rhythms of Indian music.”  Beating on the box on which he is sitting, Brozman sets up a rhythm for the kids of all ages and then supplies counter rhythms through claps, yelps, and foot stomps.  Energy imparted, he grabs his trusty, gleaming National Tricone and demonstrates a bit of “il blues.”  With the crowd now mesmerized, he swaps the tricone for a multi-stringed Indian lap instrument and provides a lesson in micro tonal music.  Playing a yet another guitar, this time a National single cone resonator, our barrier-free musician plays what sound to my ears like the perfect melding of Italian language and American blues.  As the kids cheer, Brozman leaves them with an apt, final request:  “Please learn to play an Instrument.  Guitar, mandolin, ukulele, it doesn’t matter as long as it doesn’t use any batteries.  Your life will be so much richer for it.”

Well, if you want to enrich your life with a stringed instrument, this is the place to do it.  The dozens of rooms throughout this medieval structure are filled with luthiers offering their wares.  Guitars, mandolins, and ukuleles abound.  But, you’ll also find lutes, viola de gambas, and harp guitars.  So, off I wander.

My first surprise is that I immediately meet an old friend, Spanish luthier Josep Melo.  OK, having met him at his shop in Barcelona last December, he’s more of a recent friend, but I spent such an enjoyable couple of days with him in Spain that he seems like an old friend and we certainly greet one another as if it were so.  He builds great arch top guitars and his offerings here in Sarzana are no exception.

Some of the usual names are here, like Martin, Taylor, and Lowden.  But, I also encounter dozens of builders of whom I’ve not previously heard.  So, I spend my late morning and early afternoon whiling away the hours with any and all instruments that strike my fancy.

I round a corner somewhere deep in the medieval maze and find the unexpected:  the work of an Italian luthier that evidences the influence of the guitars of Gibson from the 1930s through 1950s.  Though certainly bearing the imprint of their maker, these “DB” guitars of Paolo Dal Broi also echo the L-00s and J-185s that I love.  So, I spend a delightful 45 minutes doing my best to play the Italian blues.

Next up, I visit the man who has become THE luthier in Sarzana, Roy McAlister.  This is Roy’s twelfth Sarzana Festival.  He began attending the Festival when perhaps his most loyal client, Jackson Browne, first performed here.  By pairing extraordinary craft with artists beloved here, Roy has rightly attained privileged status in Sarzana.  This year, he built a lovely guitar that he is using to “give back to Italy a little bit of what it has given me.”  Tomorrow, he’ll be auctioning this beautiful rosewood and spruce, small-bodied twelve fretter and bestowing the proceeds upon efforts to assist those who suffered in the devastating floods that occurred a few months back.  Bravissimo, Roy!

I complete my afternoon by spending a couple of hours with two of my favorite luthiers.  Canada’s Mario Beauregard has a couple of stunning archtops on display, both of which sport Brazilian rosewood sides and backs.  The example with the spruce top is a beautiful, articulate jazz guitar.  The other bears a top wood I’ve not before encountered on an arch top:  cedar.  It’s a delightful finger style guitar.

But, to the extent that I’m any kind of guitar player, I’m a flattop player.  So, I end with some of my favorite instruments of the Festival:  the Circa guitars of John Slobod. I’ve always thought that bad maple guitars make for the worst possible flattop instruments while good maple guitars make for the best.  Well, John offers two very good maple guitars.  One is a tripod 0 while the other is a double 0 cutaway.  I like them both, but mourn that the man who in a short few days has become a very good friend, Paolo Finelli, has already purchased the triple 0.  How could a friend do this to me?

John also has a lovely rosewood double 0 (that also has sold) and a D18 style dreadnought.  So, I spend the next hour making my statement in the musical world of Sarzana.  Sure, I could be satisfied with being the worst guitar player in my home town.  But I have the courage to spread cheer to musicians around the globe by setting the low bar of musicianship in as many distant lands as I can reach.

The gap between my low bar and the heights of musicianship in Sarzana soon becomes apparent. (But, contrary to the advice I imagined during my stopover in London on my way here, I don’t mind the gap.  …  Sorry.)  One of my favorite guitars players in the world, Paul Asbell, arrives at John Slobod’s spot in this castle and begins playing a bit of Blind Blake.  He draws a crowd and musicians.  My newfound friend Riccardo D’Angelo, who proves daily with the Old Country Pickers and the Honolulu Hula Boys that Americana is alive and well in Italy, shows up with mandolin in hand and he introduces me to the stunningly talented Davide Facchini. They begin what is to be a two and a half hour performance with a couple of bluegrass standards and a Tin Pan Alley tune.  These guys are versatile!  Just as I think that the music cannot get any better, Anita Camarella, Facchini’s wife, shows up to sing “Ain’t Misbehavin’.”  She stays around with two year old daughter in a stroller and sings at least a half dozen more tunes.  At one point, John Slobod whispers to me to watch the young girl examining her father’s fingers fly during one of his solos.  She appears to be as mesmerized as I.

Camarella and Facchini are my favorite Sarzana discovery.  Cameralla’s achingly beautiful vocals are the perfect foil to Facchini’s tasteful virtuosity.  I’ll definitely want to hear a lot more from these two.

I’ve hung out here long enough that I’ve got to scramble to get to the main stage in time to catch the set by another newfound friend, Marcus Eaton.  I met Marcus the afternoon that I arrived and I immediately became a fan.  He was traveling with Roy McAlister and, along with a number of the Festival’s artists and me, staying that at the small, modest hotel, La Viletta, run by some truly charming folks.  Roy had just unveiled his “Sarzana guitar” and handed it to Marcus.  I was spellbound.  And, when he began slipping into some “David Crosby tunings” and Roy casually mentioned that Marcus is currently writing songs with David and playing guitar on David’s forthcoming CD, I knew that David had chosen well.

Marcus puts on a clinic of how to let technology serve music.  He takes the stage solo, taps on his guitar and captures that into a loop, then plays a guitar figure and loops that, too.  At his point, I’m afraid that he’s suffering from that terminal musical syndrome, loopitis, that serves to suffocate any song.  But, no, he’s as creative as he is technically savvy.  So, he brings the loops in and out of the song so that they only appear when they augment the performance and he lets his live guitar playing and emotive vocals carry the, well, tune.  It’s a great performance that surely gains Marcus some Italian fans.

How to top this afternoon?  It’s obvious:  return to the town square for another half dozen hours of food, drink, laughter, and music.  So, back I go with my European and American group of merrymakers to the open air restaurant that has become our nightly haunt.  Several hours later when my friends Paolo and Roberto say to me, “we could do this forever,” I can only nod, agree, and reach for a guitar.

Using the dinner venue as my home base, I run back to La Fortezza to catch the evening’s music making.  The highlight tonight is Bob Brozman, whose persona has only gained energy and attire whose has unbelievably grown even more colorful since this morning’s teaching moment.  The courtyard fills so that even standing room is exhausted and the crowd is captivated by what only can be called a bravura performance.  Bozeman shouts, moans, screams, and whispers his way through a tour of the world’s rhythms, melodies, and harmonies.  He slides and pounds on his instruments and, on occasion, twirls them in the air. The clouds have parted and there’s a slight chill in the air, but the music is definitely hot.

As an ecstatic and animated crowd files out, I, of course, rush back to my merrymakers.  Here, the music will last for several more hours.

I’ve posted this before, and I’ll surely post it again:  there is magic in the Sarzana air. 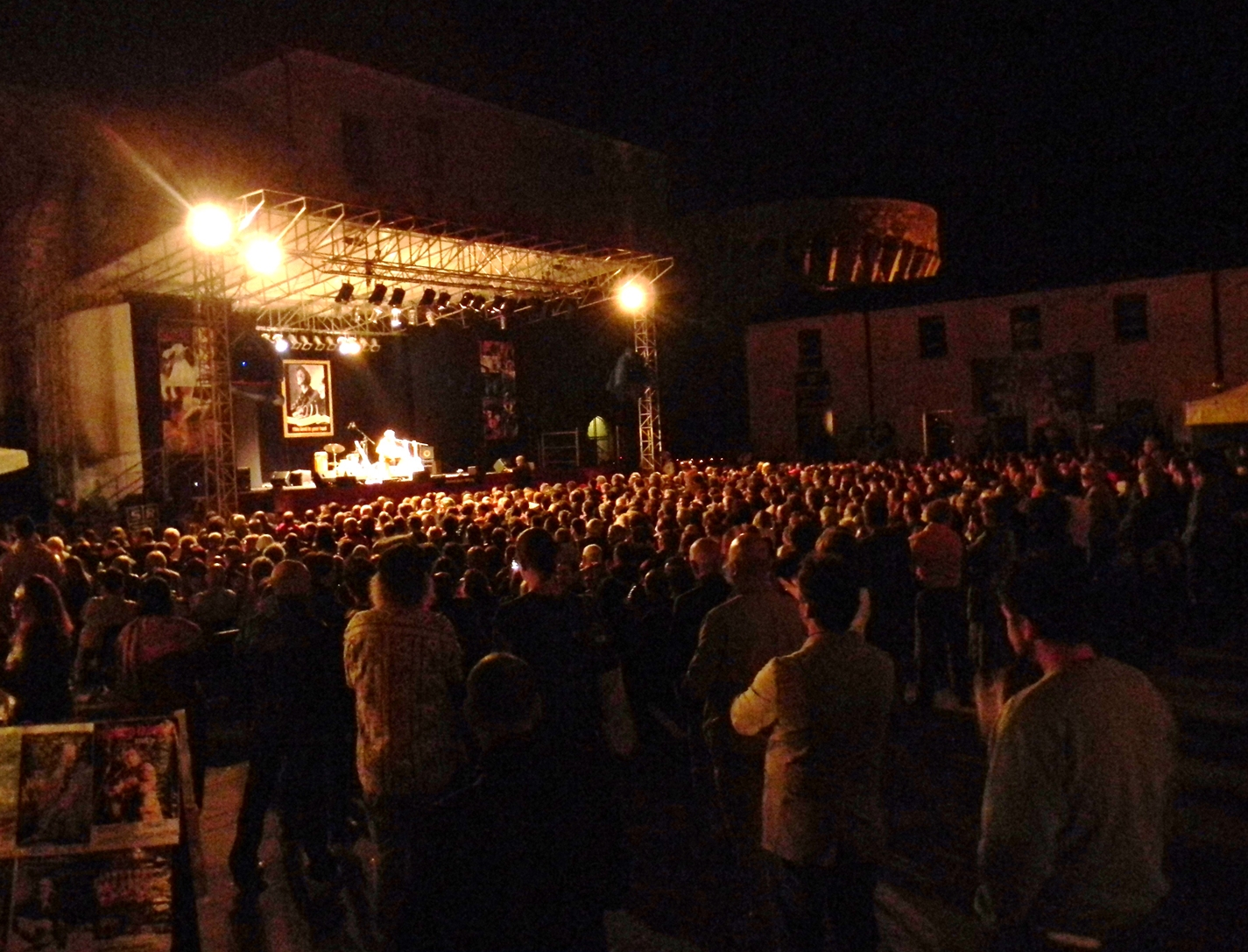 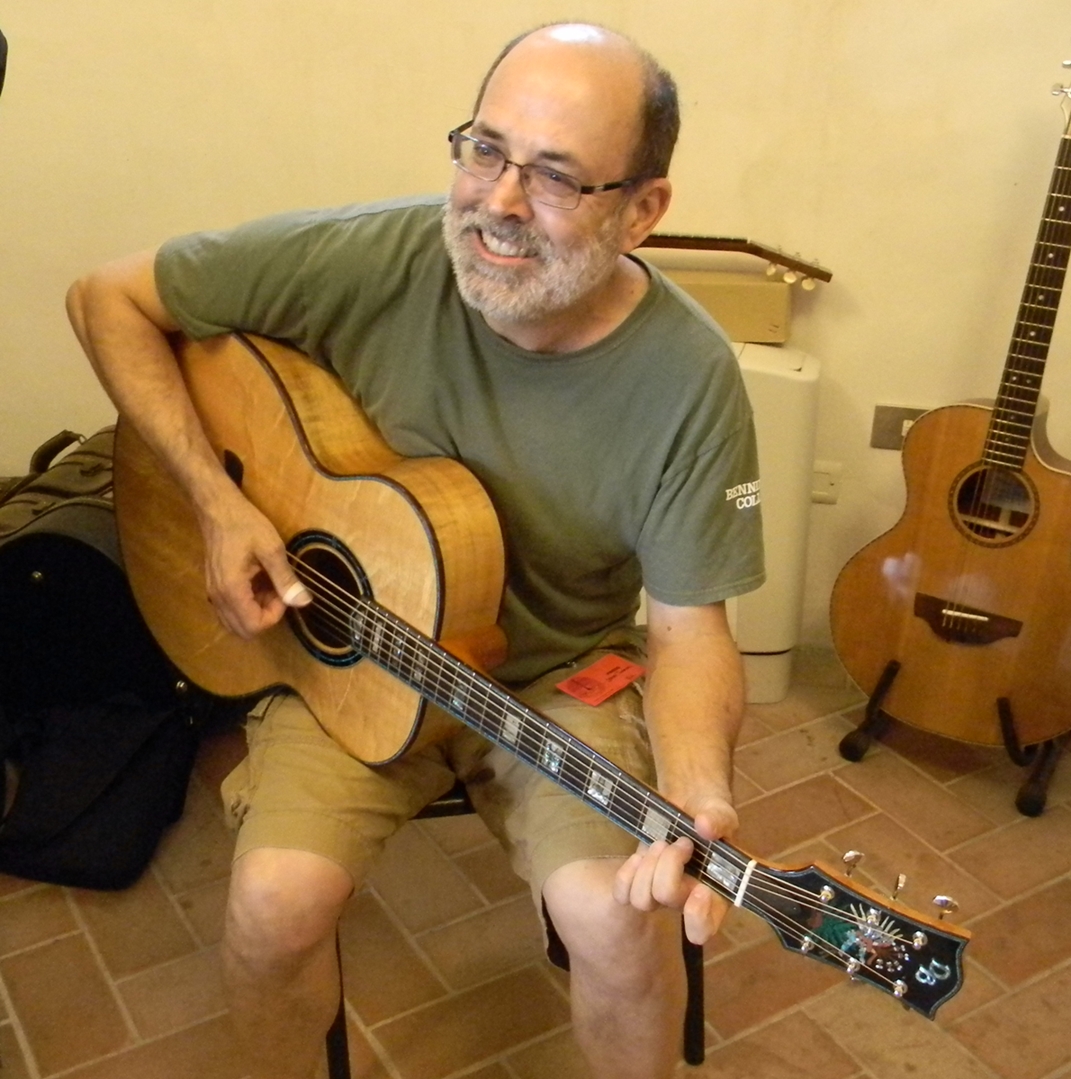 JT with a DB guitar 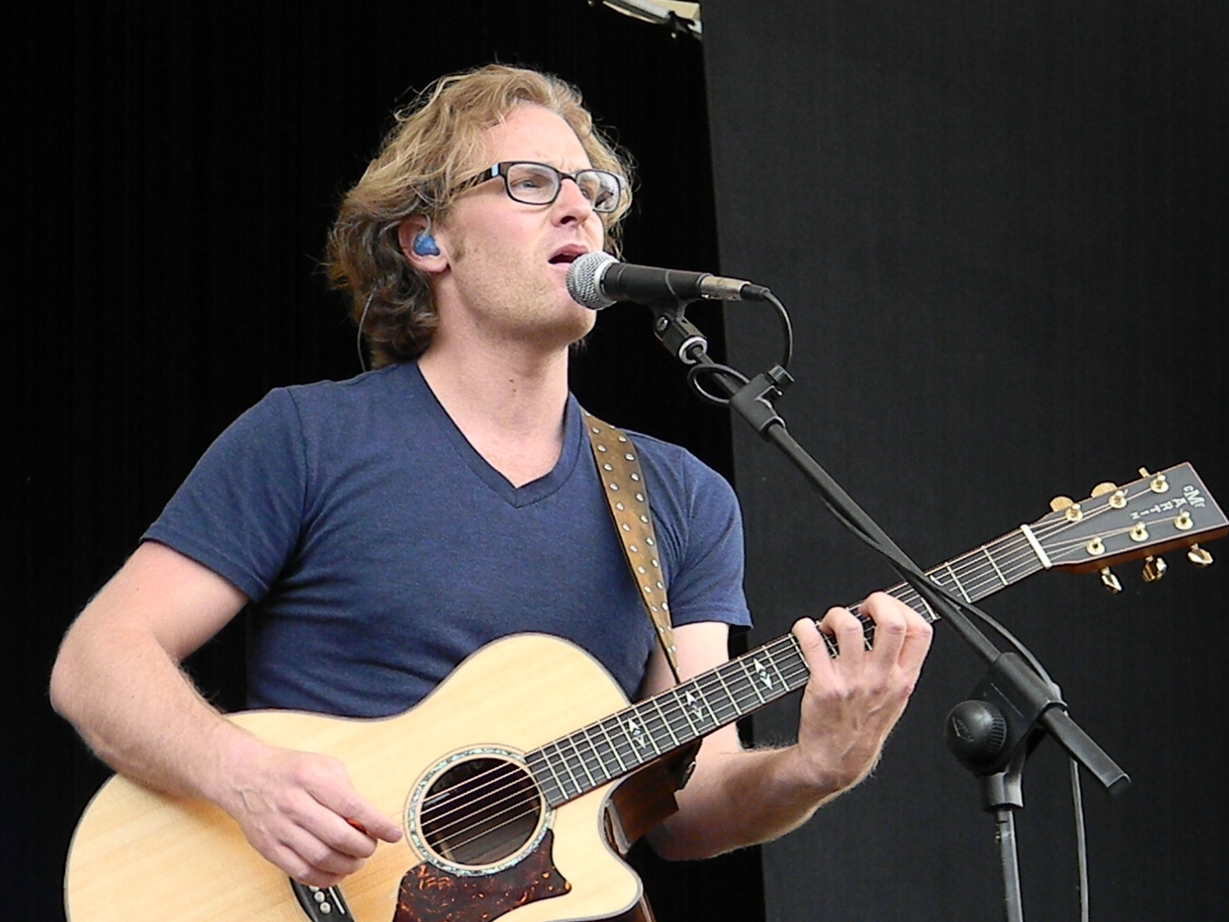 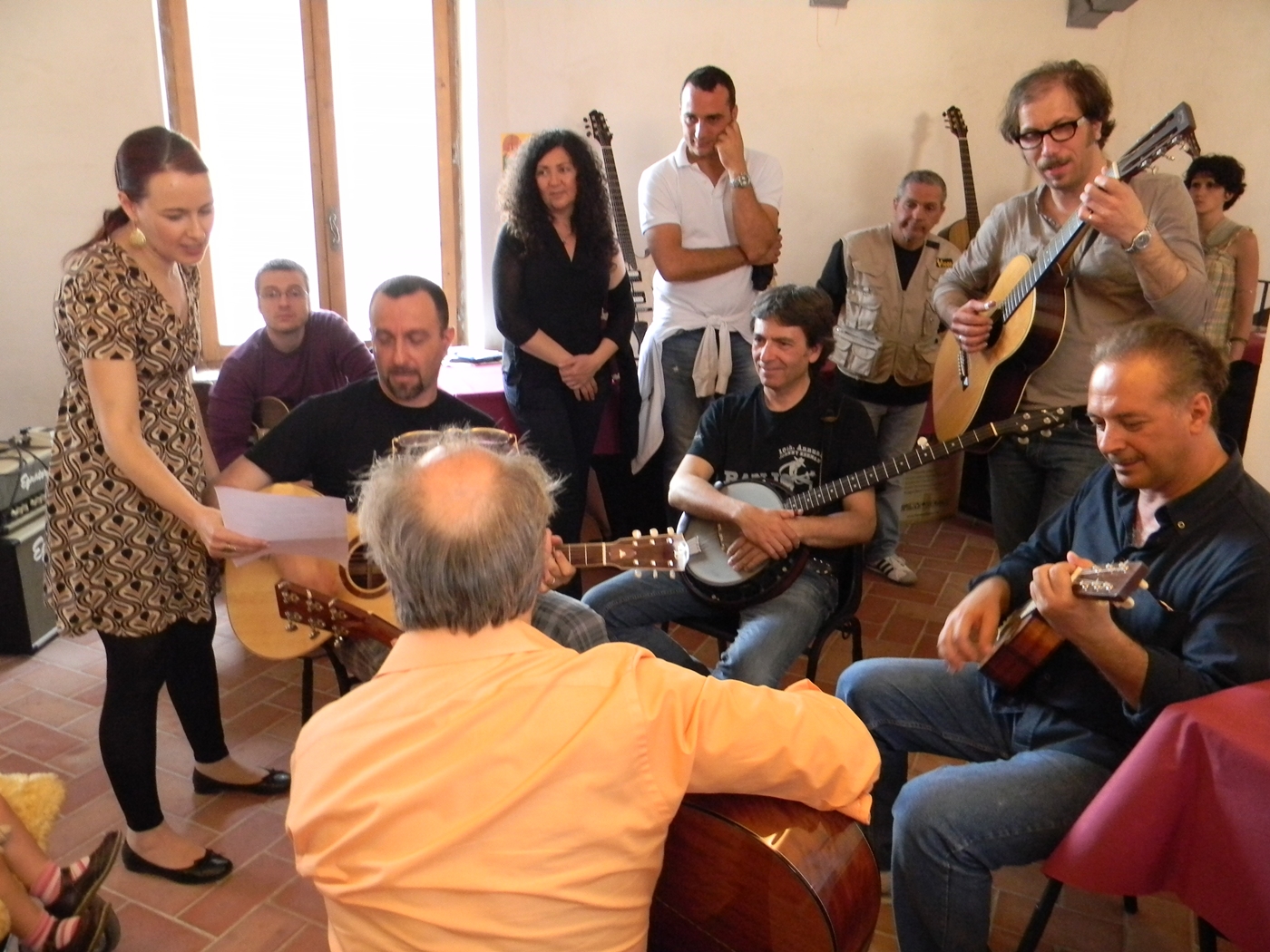 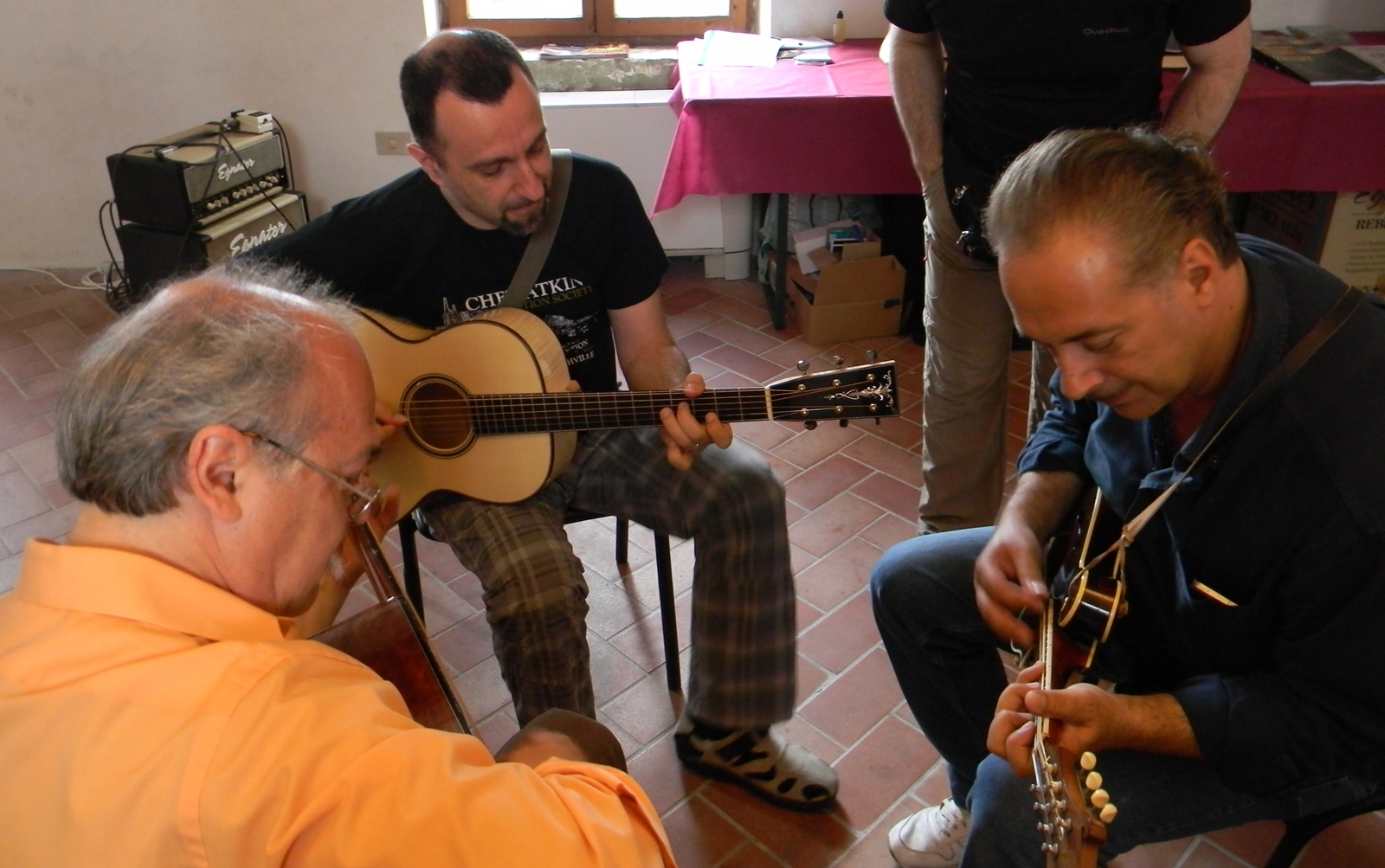 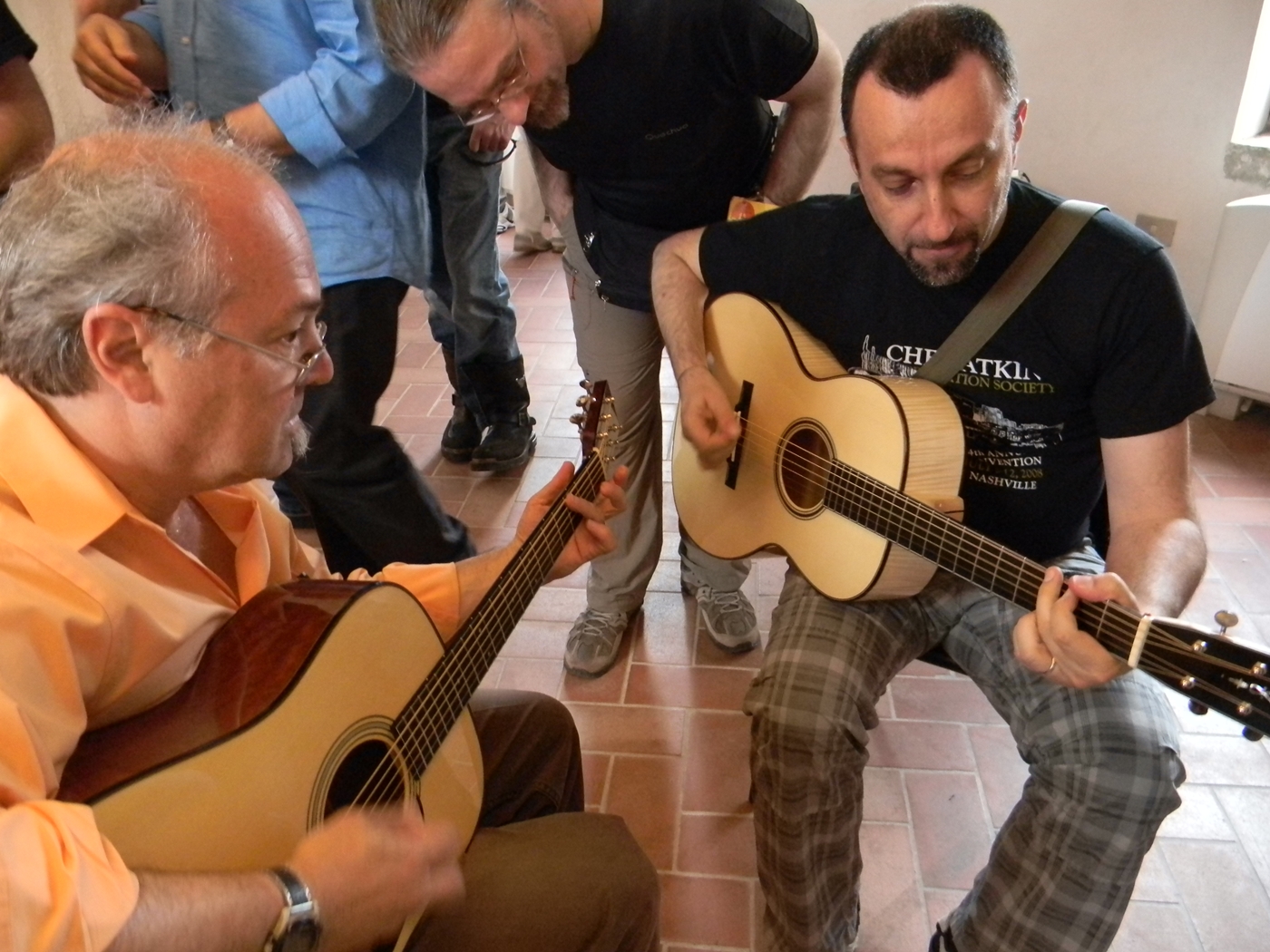 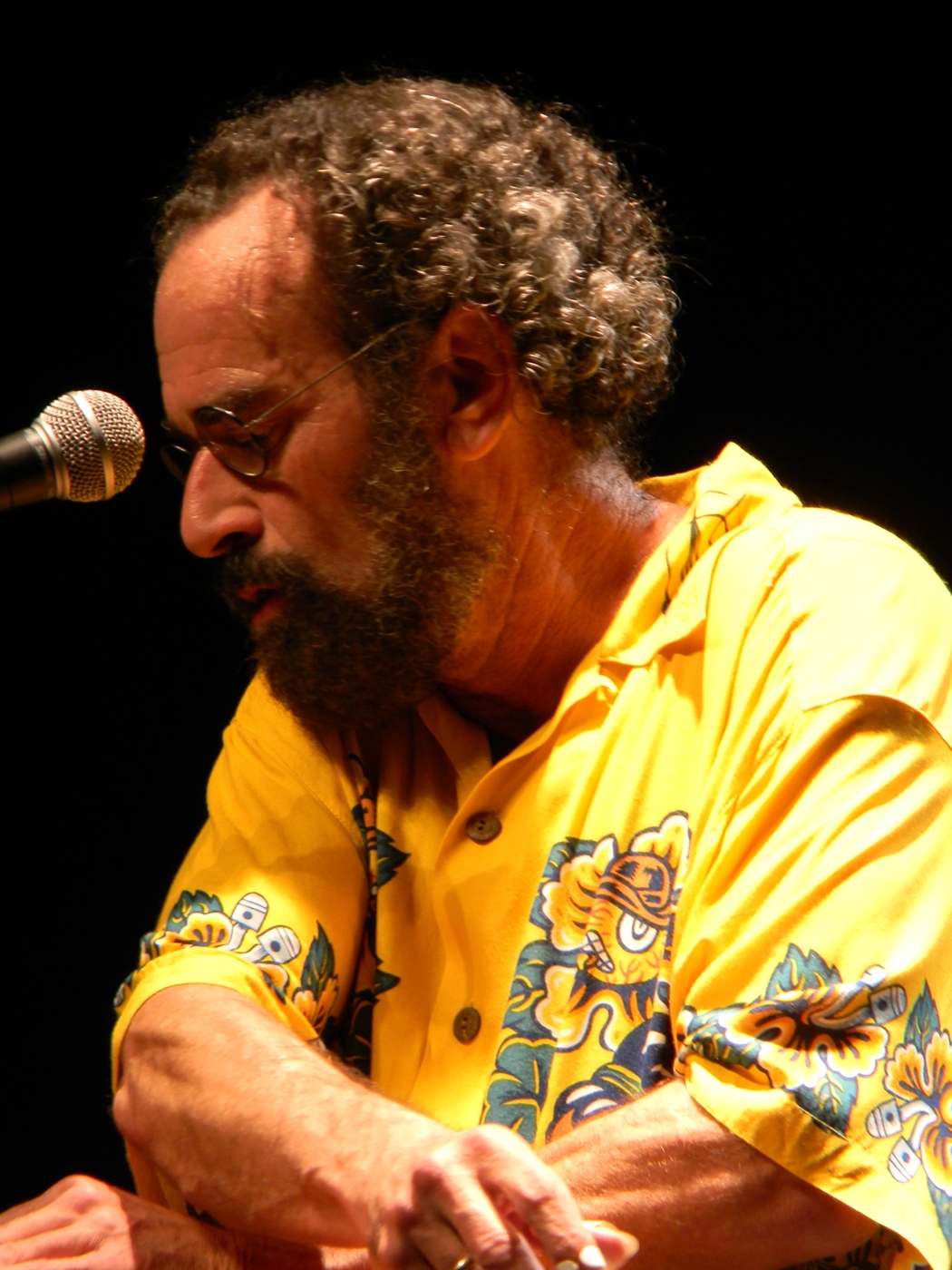 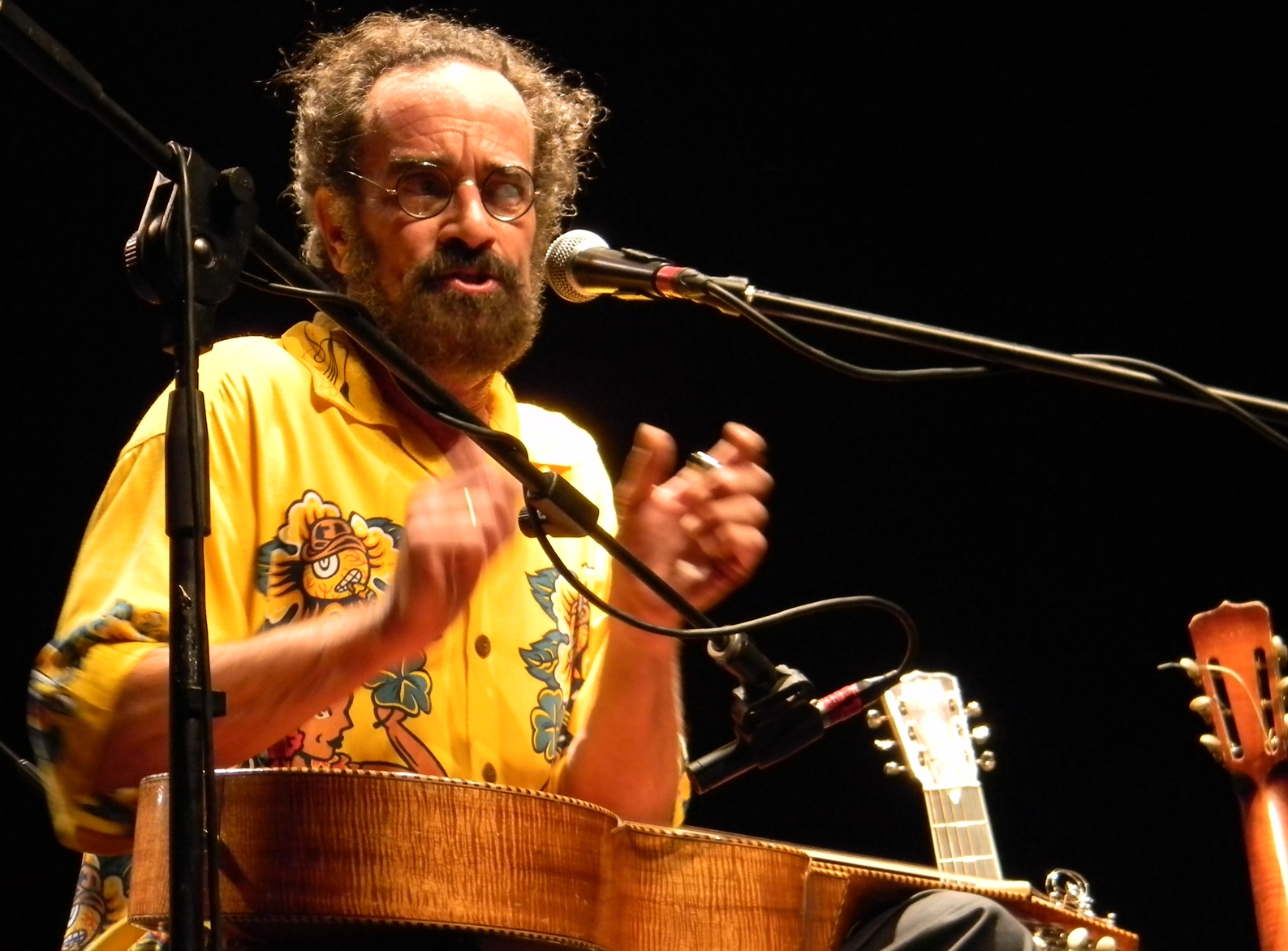 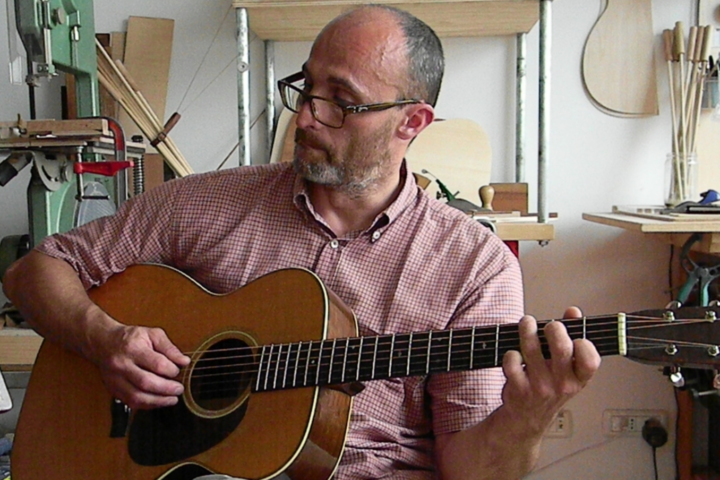 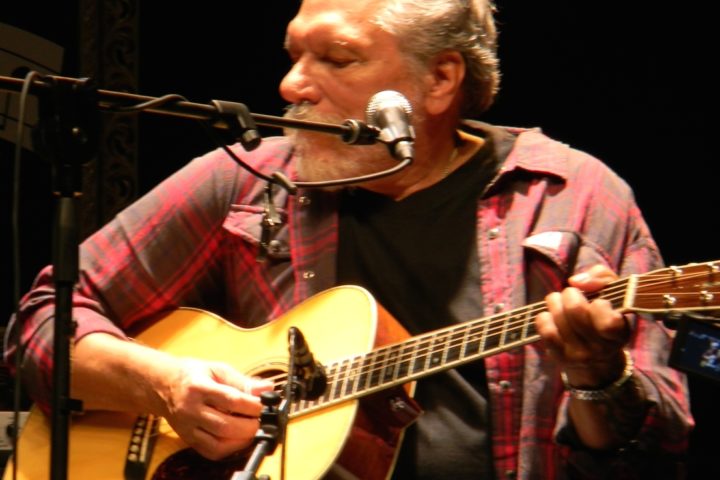